Vietnam War: and the boys are bloody in the eyes

January 12 2018
16
The filming and editing of the new 17-hour documentary “The War in Vietnam, filmed by Americans Ken Burns and Lynn Novik, took more than ten years. The tape included an amazing amount of rare archival films and photographic materials, most of which will be new, even for those who are already well acquainted with this subject. 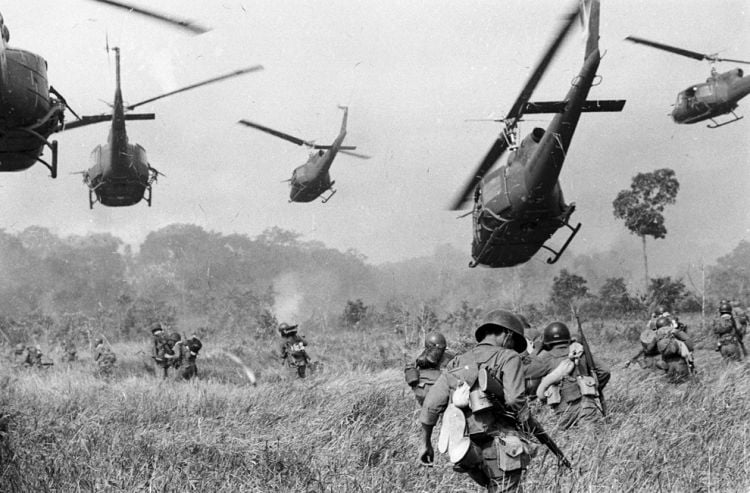 This new documentary is strikingly different from most previous ones in that the North Vietnamese is finally put on a par stories with the Americans. This contrasts sharply with such high-profile Hollywood films as Apocalypse Now (1979) and All-Metal Sheath (1987), where the emphasis is clearly on Americans. During the war, the United States lost 58 318 people, but over thirty years of struggle, three million Vietnamese troops and civilians were killed.

The film does not begin with the beginning of direct US military intervention in 1960, but with events after the end of the Second World War. The French sought to restore power in Indochina (as the region was called, including Vietnam, Cambodia, Laos and other adjacent countries) after the defeat of the Japanese, who took direct control of Vietnam in 1945 after the fall of the Vichy regime in Saigon itself.

Indochina was under French colonial rule from 1883, and now they wanted to return to pre-war status, starting in Vietnam. The Viet Ming communist forces, located in the North, led by Ho Chi Minh, fought the Japanese and believed that the West would maintain independence from colonial rule.

The United States was hostile to the attempts of the French to restore their colonial position in Vietnam, but were inactive. In September 1945, Ho Chi Minh declared that Vietnam was now an independent country and that colonial rule had ceased. Nevertheless, the French and British troops quickly agreed on joint actions in the interests of the French.

For the next nine years, there will be a bloody civil war between the French in the south and the Viet Mints in the north of the country. Like many colonial powers, the French believed that their military superiority would be an important factor in maintaining power and defeating the rebels.

In the spring of 1954, the French forces are smiling confidently at the battle of Dien Bienfu and do not know that they are being lured into an obvious trap, where they will be surrounded and cut off. After a two-month siege, the remnants of the French troops surrender, being completely demoralized.

A devastating defeat at Dien-Bien-Fu would be a key factor in the resignation of the French government and would be the pretext for the growing independence movement of Algeria, a bloody struggle that the French will take over the next few years.

The 1954 Geneva Accords marked the official end of France’s participation in the Indochina war. Vietnam was divided into two states: the North under Ho Chi Minh and the South under the technical rule of the old emperor, based in Saigon.

The understanding was that after a short period free elections would be held in South Vietnam, and everyone is waiting for Ho Chi Minh to win these elections and reunite the country. However, the puppet regime of Prime Minister Ngo Dinh Ziema, who used a rigged referendum to get power in 1955, immediately canceled the elections, and Ngo Dinh Ziem became the first president of South Vietnam.

In fact, the French were replaced by ruthless and corrupt agents of the US administration, who now wanted to use Vietnam to prevent the Domino effect: a process where one country after another in the region takes the socialist path of development.

The regime of Ngo Dinh Siena was brutal in carrying out repression not only against the Communists, but also against anyone who could be a threat, including Buddhists. Images of Buddhist monks, illuminating themselves in protest, were known throughout the world.

By 1963, the United States was morally tired of Ngo Din S'em, who had become useless to them. According to one version, the Americans supported the military coup of November 1. A few hours later, the arrested puppet president was shot dead by the military.

The United States, often sacrificing its own people, deeper and deeper into sending more and more troops to Vietnam to fight the North Vietnamese insurgency led by the National Liberation Front of South Vietnam created in 1960, the United States began by sending several so-called "advisers" to support the South Vietnamese forces However, in the end, the Americans sent thousands and thousands of new soldiers every month.

It is impossible to defeat the enemy in battle without obvious winning and understood goals.

One interviewee in the documentary describes a long bloody battle to take the hill, and many American soldiers are killed, but then they all quickly leave there. He notes that he suspects that since then no American has set foot on this hill.

The military project was widely viewed as targeting poor people, while the rich could always find ways to avoid it. One of the characters in the film talks about how, after he was called, he first met with Afro - and Hispanics and soon realized that they all had two similarities: they belonged to the working class, and they were poor.

The war was photographed and filmed by journalists, and then shown on television every night. No war has ever been covered in the media like this one. Most of the frames that we have seen are painful and sometimes incomprehensible for the cruelty of what is happening. It is not surprising that in future conflicts such enormous efforts will be made to limit and control media coverage; This was one of the lessons that the armed forces were able to draw from the Vietnam War.

Over time, the war provoked huge opposition movements within American universities (and around the world), as well as in the black ghettos of the main cities of America, from where the main part of draftees were called up for military service. Millions of previously indifferent to many people were politicized.

One of the vivid scenes of the film shows that veterans of the Vietnam War in the United States are marching in an organized manner in Washington against the war and approach the White House, fenced off by order of Nixon, to stop their further advancement. Soldiers begin to throw medals for the fence. One soldier indicates that he has some of the most honorable awards that can be given in an armed conflict, but calling the names of his dead comrades and saying that these medals mean nothing to them now, he also throws them behind the fence.

The anti-war movement is becoming an important factor in expressing wider dissatisfaction with the system, which is beginning to appear in the US and internationally.

Time and again, the US government deliberately kept things from the general public and even from Congress. Mass bombings were conducted illegally, both in Vietnam and in Cambodia.

When Nixon discovered that many of the secrets about the war were to appear in the press in the form of published excerpts from a leaked copy of the so-called “Pentagon papers”, a secret Ministry of Defense analysis of the entire history of the conflict, the president tried to send a special command to destroy part of the documents. The Nixon audio recording included in the film is still shocking, despite the fact that it will happen shortly after the 17 break on June 1972, at the DNC offices at the Watergate Hotel in Washington.

The film emphasizes that high-ranking politicians, including all presidents, from Kennedy to Johnson and Nixon, knew that they could not win the war, and the task was simply to find a way out with honor Commanders recognized that the ground war was hopeless and came down to the demand of an increasing number of bombings, killing soldiers and civilians. Some even demanded the use of thermonuclear weapons. They all hoped that the enormous losses of the North Vietnamese would force them to negotiate a truce. But the forces of North Vietnam went to complete victory, no matter what.

Finally, Nixon was forced to withdraw all American troops. He promised Saigon that the United States would act if the North invaded the South. When this happened in 1975, the US did nothing except rush the evacuation of its employees from the country.

The documentary has a strong climax from contemporary interviews with those who were involved in the war on both sides.

The mother of a young man who went to war in Vietnam describes her fear when she hears the sound of a car that looms and stops, in case representatives of the army come to tell her that her son is dead. Another person who has returned to the United States, who has completed his life, describes how he sat in his chair with a gun in his hand, trying to decide which way to beat his brains out because he could not live with what had happened. A North Vietnamese veteran describes how he could accept the death of his brother.

One area that the documentary does not pay enough attention to is the impact that the defeat of the United States subsequently had on America. For years, America struggled to accept the fact that they were defeated, and everyone knew it.

The documentary is trying to suggest that, in retrospect, both sides could see that the war was a “terrible tragedy” and a “huge waste” for which both must take responsibility. This is not true. The blame for the brutal conflict lies solely with the imperialists, first France and then the United States.

In 1980, the US tried to rewrite history so that the Vietnam War was not considered a defeat.

Many in the film express the hope that the lessons have been learned. But, unfortunately, not all the lessons were learned and not the ones that were necessary. What the US military has learned has come down to the fact that in future conflicts it would be better to lie and hide from the public what is happening and why, be it in Kuwait, Iraq or Afghanistan.

However, the fiasco of the war in Iraq and the quagmire of Afghanistan can once again take people to the streets to protest and challenge the system. In this sense, the story told by this beautiful documentary is more relevant today than ever.

Ctrl Enter
Noticed a mistake Highlight text and press. Ctrl + Enter
We are
What you didn't want to know about EnglandList of destroyed the largest and most high-tech enterprises
16 comments
Information
Dear reader, to leave comments on the publication, you must to register.