The company Glock introduced a new model of the gun

January 10 2018
121
Austrian company Glock announced the release of a new model weapons. According to the portal armyrecognition.com, at the Shot Show 2018, which will be held in late January in Las Vegas, will be presented a new pistol called Glock 19X.

The G19X was developed for the military and is a practical, everyday-carrying gun that will do what you need and when you need it, regardless of external factors.
- told Josh Dorsey, vice president of Glock. 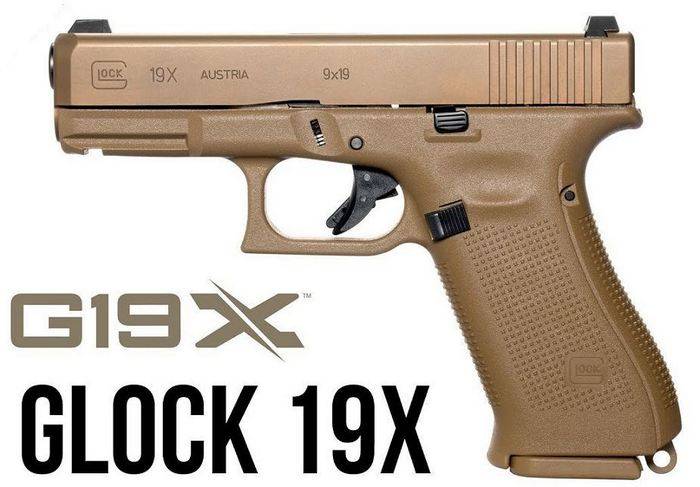 Glock 19X was developed for the US Army as a replacement for the Beretta M9 pistol under the XM17 Modular Handgun System tender, but lost the “match” to the SIG Sauer P320 pistol and will now be available in the civilian market.

The model is a "hybrid" pistols G19 and G17 fifth generation. The G19X has a full-size G17 handle and a compact upper part from the G19. The company Glock indicate that G19X will fully comply with army standards, with the exception of one detail - a safety thumb guard. The rest of the civilian market will go the same gun that was offered to the American army.

The cost and timing of the start of sales Glock 19X will be announced at the official presentation to be held at the Shot Show 2018. Today it is known that the gun will be sold in the caliber 9 × 19 mm in color "Coyote" in the configuration with three stores - one 17-charging and two increased capacity (17 + 2), transmits "Warspot"

Ctrl Enter
Noticed oshЫbku Highlight text and press. Ctrl + Enter
We are
American security officials adopted a M17 pistol - a modification of the SIG Sauer P320New gun for the US Army - SIG Sauer P320
121 comment
Information
Dear reader, to leave comments on the publication, you must to register.