Russia is not a serious country, and therefore there is no democracy in it

January 11 2018
148
In Russia, Putin is everywhere (even Superputin). The abundance of portraits and busts of Putin, exhibitions devoted to Putin, not to mention T-shirts, T-shirts and calendars with Putin, led to the formation of a personality cult in Russia, incompatible with democracy, Western analysts say. The democratic forms in the country simply degenerated: the “opposition” like K. Sobchak does not take herself seriously. 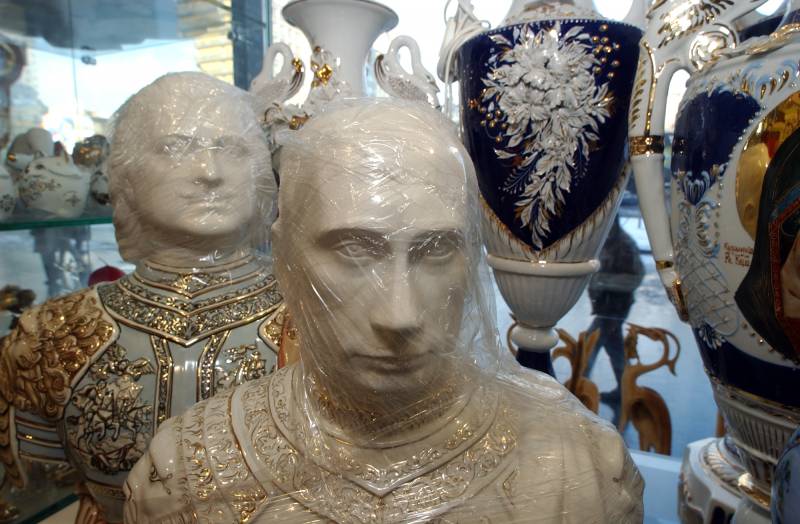 Rafael Manueco on site "ABC" spoke about the cult of the Russian president, which engulfed the whole of Russia. Such a cult does not know any precedents, because dictators like Stalin or Mao Zedong did not have social networks or the Internet at all in their times, where the personality cult would be heated. Putin has both the Internet and networks, the correspondent notes.

In promoting his own image, Putin is not new: there is a “tradition” in Russia that was discovered by “Soviet predecessors”. As Manueuko points out, in recent years, the owner of the Kremlin has not only "openly allowed to place his own portrait everywhere," but also allows "to establish busts in his honor." Moreover, art exhibitions are already dedicated to Putin! And this is not to mention such trifles as the images of Putin on T-shirts or calendars. The cult of personality is crowned by constant propaganda in the press: the first face of the state is invariably present “in all the Russian media”. Such a widespread predominance of Putin, the author with irony calls "broadcasting from every iron." And the situation is unlikely to change, rather, it should already be recognized as “permanent”. Only a “dissident” whose behavior will be deemed “undesirable” can refuse it.

Not only in the media, Putin’s image is being promoted. Sociological centers are also involved. Part of the hype around Putin - their merit. The author considers open polls about the popularity of the host of the Kremlin “bloated”.

The result of these events, Manueko, declares Putin's "personality brilliance" in the country and in the world. None of the political leaders on the planet could achieve anything like it.

Such a "brilliant" cult has a wrong side.

According to the author of the material, an overestimated assessment of the personality of the leader leads to the incontestability of his authority. As a result, the cult of personality becomes incompatible with freedom of opinion and the notion of democracy.

Putin has become a “father of the fatherland,” an indispensable and even one-of-a-kind leader who opposes “external enemies.” It is Putin who guarantees the country “stability and cohesion”, against which “adventurers” like Navalny are trying to oppose and in general any oppositionists - Sobchak or Yavlinsky who do not have “clear positive programs”.

A big success in Moscow was won by the exhibition with the pretentious name “SUPERPUTIN”. Well, then Putin will promote himself at the World Cup ...

The art exhibition SUPERPUTIN, we recall, has been operating in Moscow since the beginning of December. Photos from the exhibition can be viewed on the website. "InoSMI".

As the name implies, the exhibition exhibits pictures dedicated to Putin. Three dozen Russian artists presented their works on the Putin theme. The President of Russia is shown in the image of a superhero: the artists have emphasized the numerous “superpowers” ​​and “superpowers” ​​of Putin.

Of course, no opposition is able to “offend” such Putin. This writes Stefan Scholl in the publication "Berliner Morgenpost".

According to Scholl, the Kremlin made Ksenia Sobchak the “star” of the presidential election. Mrs. Sobchak for a reason appears on state television channels and looms constantly in political programs on TV. She is even allowed to say that from the point of view of international law, the Crimea is Ukrainian. Sobchak turned out to be the first opposition politician, who was allowed to give his opinion on state-owned TV in detail. As a result, she became the star of the Russian presidential campaign (after Putin, the journalist is ironic).

In Russia, no one doubts that Putin will win. For the Kremlin, one thing is important: the government wants to have a vote of confidence from the people — let Putin have an 70% of votes with an 70-percent turnout.

This is a very large turnout, and therefore the Kremlin "redid the list of candidates," throwing out those who "have already been forced into their teeth." Neither Sergey Mironov, nor Gennady Zyuganov are participating in elections today. But Pavel Grudinin and Ksenia Sobchak will test the forces. This is not to be bored, laughs journalist.

Over Sobchak in Russia really laugh. She is called “blonde with botox lips” (“Die Blondine mit den Botox-artig gepolsterten Lippen”), and she is reminded of the famous “vulgar” reality show - “2 House”. This oppositionist, as Scholl believes, "does not take herself seriously."

A sensation, however. Western journalists and analysts have revealed the secret of Russian elections. Both Sobchak and Grudinin are invited by the Kremlin to turn the 2018 election into a spectacular show with the participation of a “blonde” declaring Crimea Ukrainian.

What role Kremlin political technologists have identified Grudinina, foreign experts have so far been difficult to say. Perhaps, if Xenia was given the role of an unserious opposition, Grudinin, on the contrary, got the role of a heavy counterbalance in the elections, to which the government assigns a few percent of the vote, just like Mr. Prokhorov was at one time. In 2012, Prokhorov received almost 8% of votes, but later did not manifest himself in politics. In the West, they believe that he was simply squeezed out of politics. And if the assumptions of foreign authors (in particular, Scholl) are correct, then Grudinina will have to be “moved” after the elections.

However, such assumptions very often do not come true, and the results of elections often surprise even the most seasoned politicians. In the United States, Hillary Clinton was in the lead in almost all polls, but Donald Trump, a man outside the clans and a businessman who passed through a series of scandals, came to power.

Ctrl Enter
Noticed oshЫbku Highlight text and press. Ctrl + Enter
We are
Project "ZZ". Sobchak and the front "dissatisfied." The people are "tired" from PutinGeopolitical mosaic: if he wins the election, Mitt Romney is ready to attack Iran, and Ksenia Sobchak has become a revolutionary star of the American press.
148 comments
Information
Dear reader, to leave comments on the publication, you must to register.