Soldiers of Roosevelt and Churchill and "Operation Robbery" 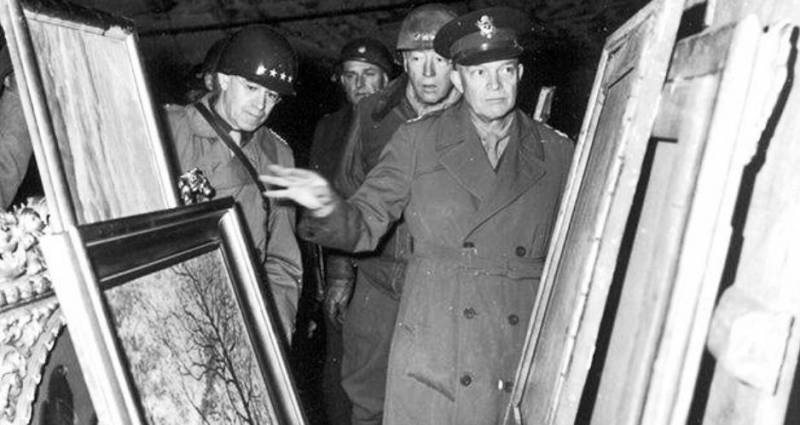 The “trophy fever” that really engulfed the Red Army in the last months of the war was by no means an exceptional phenomenon in the troops of the victorious powers. Meanwhile, the “trophy” theme is now being actively used for propaganda anti-Russian purposes. Suffice it to recall the sadly famous photograph in which a Soviet soldier and a German woman are pulling a bicycle in different directions. The accusers of the Soviet soldier usually forget to ask about what was happening in the allied forces. But there is something to compare.

There was an undermining of safes in order to assign their contents.

For example, the famous British historian Anthony Beevor writes about this:

“The facts of the robbery by the Allied forces were recorded long before their units crossed the Reich border. “On the basis of the items found in the soldiers,” the report said, prepared for the American command during the Ardennes battle, “we can make an unequivocal conclusion: the robbery of the property of the Belgian civilian population is carried out on a significant scale.” There was an undermining of safes in order to assign their contents. Before entering a village located in Central or Southern Germany, the American military police installed special posters that read: "Do not exceed the speed, do not rob, do not fraternize with the civilian population." However, all these warnings had no effect on the Allied soldiers.

Further to the north, British troops were advancing. An officer of the Scottish Guard, who later became a judge, noticed that it would be more accurate to call the operation to force the Rhine as “Operation Robbery”. He described how the broken windows of the stores were what might be called the “paradise for thieves”. “It was impossible to prevent robbery,” the former Scottish officer recalled, “only to limit it to the appropriation of small items.” Here tankers turned out to be in a better position, who could place everything in their combat vehicles - from typewriters to radio sets ... I began to shout at the soldiers of my platoon who were robbing the house instead of sweeping it. But suddenly I discovered that two binoculars stuck somewhere somewhere already hang on me! ”

Repatriated are widely occupied with robberies and flea deeds

More independent in their actions, such as, for example, SAS teams (special airborne service - auth.), Were respectively more ambitious. One officer later noted that "Monty was concerned about the problem of looting." Whereas Field Marshal Alexander, apparently, "treated her more calmly." In one or two cases, bold robberies were committed in the country villas, which could have been entered into history of the criminal world, since very expensive jewelry was stolen. One of the SAS divisions found a store of works of art that belonged to Goering's wife. He removed the cream from this collection of the unit commander himself. After which he allowed his subordinates to make their choice. The canvases were cut out of frames, rolled up and put in mortar barrels ”.

At checkpoints, American soldiers carefully examined all passing German soldiers, trying to determine if there were any SS, foreigners or civilians among them. Some Americans took away watches and medals from the Germans, as well as personal weapon.

However, the case was not limited to the military alone. The report of the military prosecutor of the 1 of the Belarusian Front on the implementation of the Supreme Command’s directive on changing attitudes towards the German population, prepared by 2 in May 1945, noted: “Repatriated, followed by repatriation points, and especially Italians, are widely involved in robbery and flea-trade Dutch and even Germans. In this case, all these outrages fall on our soldiers ... ".

That is, repatriated residents of the states occupied by Germany also contributed to this. They had their own attitudes toward German state and private property. She was not considered inviolable at all. It is curious whether there have been bouts of mass repentance in Italy or Holland about this? Or did they decide that people who were forcibly sent to work in Germany were entitled to secure themselves for the first time at the expense of German property? What can we say about the prisoners freed from concentration camps?

But the right to use the property of surrendered enemy soldiers primarily belonged to the soldiers of the victorious side.
Here's how German chief corporal Kopiske described his first meeting with the British military in May 1945 of the year when he surrendered to captivity: "A little further, at a railway crossing just before the village, we were met by a" weapons collection station and a watch. " I thought I was dreaming about it: civilized, prosperous Englishmen take the watch away from the overgrown mud of German soldiers! From there we were sent to the schoolyard in the center of the village. There have already gathered a lot of German soldiers. The Englishmen guarding us threw chewing gum between our teeth - which was new to us - and they were praising each other with their trophies, throwing up their hands, humbled by their wrist watches. ”

It is curious that modern exposers of the Red Army somehow forget to describe what was happening on the territory controlled by the troops of the “Western democracies”. Let us only try to imagine modern newspaper headlines: "Roosevelt and Churchill's soldiers carried out" Operation Robbery "," The part of Germany captured by the Western allies became "a paradise for thieves", "Field Marshal Alexander was calm about robberies, and Montgomery was concerned about them." Well, why not reflect on the behavior of the soldiers and officers of the Anglo-American troops?

However, neither American nor British soldiers could remind the Germans in their defense: “Do you remember what you were doing in our occupied territories, how much you stole?” The American didn’t have to return to completely destroyed cities after the war , in the village, where often there simply wasn’t a single unbroken house, where women began to forget what is not something beautiful, but just new clothes without patches, and the children simply didn’t know. It was just such a difficult return for the Soviet soldiers and officers. And now they must be condemned for having finally reached Germany, they tried to at least somehow compensate for their material losses at the expense of the executioners and robbers of their country, tried to send at least something valuable home to their families? Not to mention the fact that what was sent could have saved the family from starvation, often the package from the front simply gave the woman in the Union the only opportunity to dress in any decent way.

Ctrl Enter
Noticed oshЫbku Highlight text and press. Ctrl + Enter
We are
Diplomats of the People's Commissariat of Defense: on the eve and during the warHow Anglo-American troops carried out the "Operation Robbery"
52 comments
Information
Dear reader, to leave comments on the publication, you must to register.