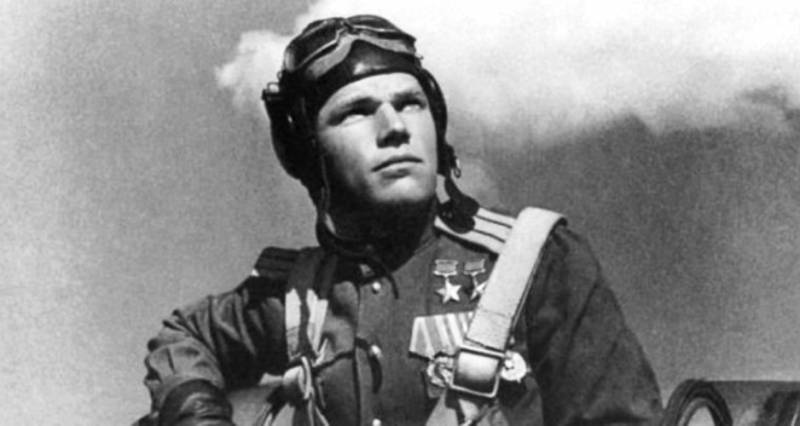 The recent incident in the Syrian sky, when the American F-22 tried to "intercept" Russian attack aircraft, which covered the humanitarian convoy, but was forced to retreat from the Su-35 that arrived in time, causes historical associations with those times when the US Air Force also tried to impose “zones of American air influence” on our country.

This took place at the end of World War II, when our countries fought against one enemy. However, the struggle of the USA against the common enemy was quite ambiguous - the Americans and the Nazis held secret negotiations (the first contacts began in 1943), which aimed not only to separate peace, but also to counter the “red threat” with the Hitlerites. As now, of the surviving terrorists, the Americans are creating a "new Syrian army", so in the 1945 year, the allies of the captured soldiers of the Wehrmacht and the Waffen-SS formed shock units for the war against the Soviet Union.

However, we will return to the airspace engulfed by the war and waiting for the liberation of Europe. American air incidents aviation began in the second half of 1944. Moreover, there is every reason to believe that these situations, the culprits of which were always our allies, were not random episodes of friendly fire (“friendly fire”), common in the war, but the results of the desire of the US Air Force to show who is the master in the skies of Europe.

The case when forty American Light fighters attacked the headquarters of the 6 Guards Rifle Corps and the airfield of the 866 Fighter Aviation Regiment in the vicinity of the Yugoslav city Nis was widely known.
The commander of the corps, Hero of the Soviet Union Grigory Kotov and another 30 man, fell victim to this traitorous attack. In addition, two of our aircraft were destroyed and a dozen cars were burned down. Our pilots who managed to take off took the Americans to flight by shooting down four aircraft. In their fragments, maps were found, on which Nis was already liberated, and under the control of Soviet troops, Niš was marked as a target. That fully shows the failure of American excuses about the "loss of course." Another indirect evidence of the intention of the actions of Americans is that the blow was struck on November 7 of the year 1944.
Marshal of the Soviet Union Georgy Zhukov testified about the premeditation of American provocations, stating in his memoirs that the commander of the US Air Force Spaatts defiantly refused to discuss with him the order of flights over the Soviet zone. He stated that "American aviation flew everywhere and will fly without any restrictions."

It can be assumed that most of the American provocations that led to air collisions remained unknown. For obvious reasons, these facts were not sought by the Soviet sources at the time to advertise. However, it is known how the American pilots in the skies over Berlin tried, in modern terms, to “intercept” the Soviet fighter, piloted by the legendary Russian pilot Ivan Kozhedub.

Subsequently, the air marshal told how it was. 17 April 1945 of the year, having met the Allied Flying Fortresses strategic bombers in the air, he barred a couple of Messerschmitts from them, but after a second he himself was attacked by American fighter jets.

“To whom the fire? To me?! - Kozhedub recalled indignantly half a century later. - The queue was long, with a large, one kilometer, distance, with bright, unlike our and German tracer shells. Because of the long distance, it was clear that the end of the line was bent down. I rolled over and, quickly getting close, attacked the extreme American (by the number of fighters in the escort, I already knew who it was) - something exploded in his fuselage, he strongly steamed and went with a decline towards our troops. Polupetley doing a combat turn, with an upside down position, I attacked the next. My shells went very well - the plane exploded in the air ...

When the tension of the battle subsided, my mood was far from victorious - I had already managed to make out the white stars on the wings and fuselages. “They will arrange for me ... by the first number,” I thought, putting the car down. But everything worked out. In the cabin of the "Mustang", landed on our territory, sat a hefty Negro. To the question of the guys who came to him, who shot him down (or rather, when they could translate this question), he answered: “Focke-Wulf” with a red nose ... I don't think he played along; the allies have not yet learned how to look both ways ... When the PCF films showed, the main points of the battle were fixed on them very clearly. The films were watched by regiment command, divisions, and corps. The commander of the division, Savitsky, to whom we then entered into operational submission, said after watching: “These victories are in the account of a future war.” And Pavel Fedorovich Chupikov, our regiment commander, soon gave me these tapes with the words: “Take them away for yourself, Ivan, and do not show it to anyone”.

The "allied" actions of the Americans did not leave the Soviet officers doubt that a war with them was inevitable and was only a matter of time.

Hunting for "Mustangs" and "Flying Fortress"

The next fight between Ivan Kozhedub and American pilots took place five days later, when a pair of Mustangs attacked him again. One American managed to jump with a parachute from a wrecked car, the second burned down together with a fighter that exploded in the air.
Kozhedub's last battle with the allies took place on the eve of Victory Day, when the Soviet ace prevented the entire squadron of the Boeing B-17 Flying Fortress from breaking into the airspace of the Soviet occupation zone. "Flying Fortress" with a maximum bomb loading perley through, ignoring radio queries and warning shots, and to deploy them, the Soviet pilot had to knock down three four-engine giants one after the other.

However, the personal "American account" of the future marshal ended there. When Kozhedub a few years later, when he was already a major general, commanded one of the divisions of the 64 th air corps that protected the DPRK's sky from the American aggressors, he did not participate in the battles personally.

Directive of the USSR Ministry of Defense it was prohibited. 264 American aircraft were shot down by his subordinates.

Our grandfathers and great-grandfathers knew perfectly well what to do with the American "interceptors". And it is necessary to hope that their grandchildren have not lost this art ...

Ctrl Enter
Noticed oshЫbku Highlight text and press. Ctrl + Enter
We are
Diplomats of the People's Commissariat of Defense: on the eve and during the warMyths of the Great Patriotic. Papier mache helmet
46 comments
Information
Dear reader, to leave comments on the publication, you must to register.