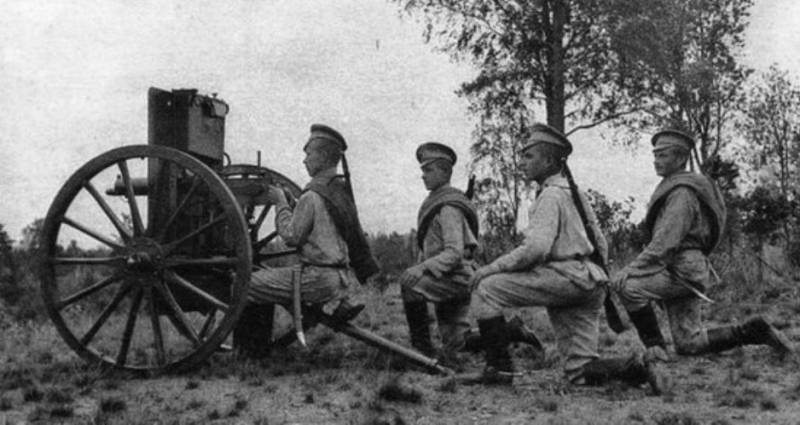 Machine gun "Maxim" from childhood is familiar to anyone interested in military history. Who does not remember film shots or photographs in which two fighters lying on a machine gun are firing? One - the first number shoots, the other - the second number supports the cartridge belt with his hands in the correct position.

At the same time, not everyone knows that once the Maxim machine gun looked more like an artillery gun.
The Killing Machine, created by Hayrem Stevens Maxim, a British gunsmith of American origin, was tested in Russia in 1887. The then “Maxim” was created under the Berdan 10,67-mm cartridge with black powder. Even Emperor Alexander III shot from it. After testing, representatives of the Russian military department ordered Maxim 12 machine guns of the 1885 model of the year under the 10,67-mm cartridge of the Berdan rifle.

Subsequently, the Berdan rifle was removed from service, and the Maxim machine guns were converted to the 7,62-mm cartridge of the Russian Mosin rifle.

In 1901, the 7,62-mm Maxim machine gun on an English-style wheeled carriage was adopted by the ground forces. The machine gun (the mass of which on a heavy carriage with large wheels and a large armored mass was 244 kg) was attributed to the artillery. Accordingly, the machine gun units were originally called batteries.

Then in the infantry regiments appear machine-gun companies and teams. The “riding” machine gun “Maxim” on a single-horse-drawn field wheeled gun carriage really looked more like a gun than the machine gun we used to. Even the extremely cumbersome and extremely noticeable “Maxims” on the field wheel carriage (sometimes machine guns were used on a tripod) proved to be extremely formidable weapons during the Russo-Japanese War 1904-1905's.

Great losses were inflicted on the Japanese by Russian machine guns under Bensio and in repelling the assaults of Port Arthur.

Russian machine-gunners proved themselves in the battles for the main Liaoyan position 20 – 21 in August 1904, causing great damage to the attacking Japanese. And this is despite the fact that the total number of machine guns in the Army in Action was not in the thousands or even hundreds, but in dozens.

It affects an extremely large number of soldiers serving machine guns. According to the state approved by 6 in May 1910, the machine-gun team was directly part of the regiment and was subordinate to its commander, but could be given to the battalions and even companies in whole or in parts. In it were the commander of the state, 3 chief officer - one older and two younger, 1 sergeant major, 2 platoon sergeant, 2 machine gun sergeant, storekeeper 1, 6 machinegun junior non-commissioned officers, corporals 8-gunners; 8 spare gunners, 24 carrier of cartridges, 16 soldiers with machine gun gigs, 8 riders for machine gun gigs, 8 riders for cartridge gigs, 3 soldiers for clockwork horses, 2 cook, 2 workers in the kitchen; 4 batman.

Thus, the regular strength of the machine-gun team was 99 people. All this hundred without one served only eight machine guns. What would the machine gunners of subsequent eras say about such a relationship?

Ctrl Enter
Noticed oshЫbku Highlight text and press. Ctrl + Enter
We are
The weapon of victory. "Degtyaryov Infantry" - machine gun DP 85 yearsWhat should be a modern sniper (part of 1)
58 comments
Information
Dear reader, to leave comments on the publication, you must to register.