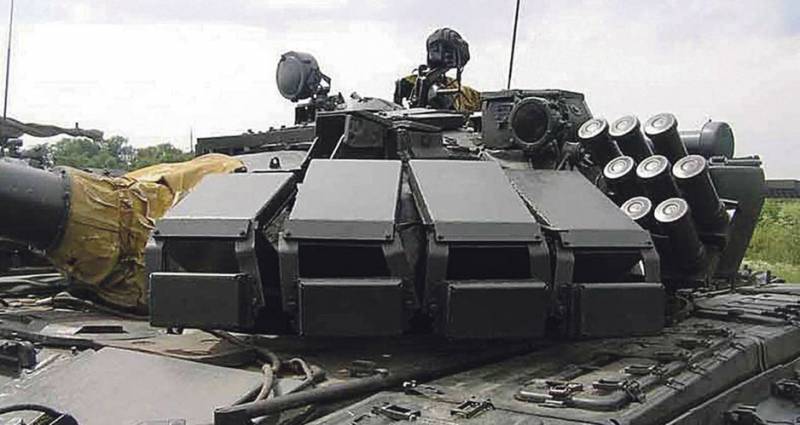 35 years ago, the Israeli armed forces - the IDF for the first time in the world used in combat conditions Tanksequipped with mounted complexes of dynamic protection (NKDZ).

History the creation of dynamic protection in the domestic sense or explosive reactive armor (explosive reactive armor - ERA) according to foreign, English-language classification began in the USSR about 70 years ago, in the late 40-x, the beginning of 50-x in the depths of the super-secret Soviet defense industry in the form of scattered experimental attempts with counter-explosion energy to counteract cumulative ammunition. The most impressive results were obtained in the 1957 – 1961 years by B. V. Voitsekhovskii and V. L. Istomin in the Novosibirsk Institute of Hydrodynamics. Due to the secrecy of the work carried out, the article of these authors was published in the open press only in 2000-m (“Physics of Combustion and Explosion”), when one of them was no longer alive. The first thesis on dynamic defense was successfully defended at the beginning of 60's by an employee of the All-Union Scientific Research Institute of Steel A.I. Platov, who is also no longer among us. He took an active part in the above studies. Despite 50 and more than the years since that time, the dissertation of Alexander Ivanovich is still not publicly available. It fairly fully investigated the basic parameters of devices that implement a plane-parallel circuit of elements of dynamic protection (EDS) and containing a flat explosive charge, lined with metal plates.

In 1978, the research and development department of 32 (dynamic protection) was created at the All-Russian Scientific Research Institute of Steel. The main task assigned to its employees was not just to study the general issues of interaction of a cumulative jet with a dynamic protection device, but to study the two main options for EHL (plane-parallel and volumetric) with the choice of optimal design parameters of both the EHL itself and its deployment schemes on the armored object. Therefore, when the Israeli tank М1982А48 with the explosive armor complex ERA Blazer, captured by the Syrians during a night battle in the Sultan Yaakub area, was brought to the USSR in the summer of 3, this was not a revelation for the staff of the VNII. All the advantages and disadvantages of the ERA Blazer complex to Soviet developers of dynamic protection were obvious and understandable.

In this regard, at the scientific and technical meeting held at the All-Russian Scientific Research Institute of Steel, based on the results of studying М48А3 with the ERA Blazer complex, it was decided not to copy the Israeli equivalent, but to complete the previously started work on optimizing the mounted dynamic protection device based on a single unified EDZ, which later The index was assigned 4C20.

The main advantages of the EKZ 4C20 of the Soviet NKZD "Contact" before the EHL applied by the Israelis in the ERA Blazer complex were:

unification The single EHL 4C20 was installed on all main armored vehicles protected by armor. On Israeli tanks М48 and М60, equipped with ERA Blazer, there were more than ten EDS of different standard sizes;

significantly smaller area of ​​weakened zones. At least eight percent of each ERA Blazer’s EDL design did not contain explosives. When a cumulative jet hit these zones, the e-radiation did not work. In the "Contact" of such zones was no more than one percent;

the possibility of various combinations of installing EDS on the protected armored vehicle. The constructive dimensions made it possible to design the NKDZ “Kontakt” with reference to each armored center of a specific tank so as to ensure the highest possible overlap area of ​​the protected projection;

ability to control the transfer of detonation from the explosives of one EDS to the explosives of another. The technical solutions incorporated into the 4C20 NKZD and subsequent ECD 4C22 built-in dynamic protection complex (VDZ), allow depending on specific requirements or localize the process of detonation of explosives within one EHD, thereby providing a consistent response several ehz. This sets in motion steel plates destroying a cumulative jet or an armor-piercing-sub-caliber projectile (BPS), of a length that provides a sufficient effect on both BPS, and monoblock and tandem ammunition (these technical solutions were protected by an international patent);

greater safety in handling EDS. Apparently, the design of the EDS of the ERA Blazer complex was created in an extremely short time and without due attention to compliance with the safety requirements imposed on explosive products. The author of these lines had a chance to personally observe at the bottom of the onboard toolboxes installed on the body of the trophy М48А3, puddles of elastic explosives that had flowed out of the ERA Blazer's EDZ case under the influence of high June temperatures in the battle zone in the Sultan-Yaakub area. Of course, it is difficult to talk about the high anti-cumulative effectiveness of the Israeli complex, if an explosive has partially leaked out from the EDS installed in it. The fact that in EHL 4C20, 4C22 is simply impossible, well and not to say.

All of the above design differences allowed the developers of the Soviet dynamic protection in 1995 to obtain two patents, reissued from previously secret copyright certificates. Patents No. 2060438 and No. 2064650 protect the copyright of the developers of Soviet dynamic protection for original innovative technical solutions incorporated into the design of domestic EDS and “Contact” complexes.

The author considered it his duty to present the above technical details in order to protect the dignity of the developers of the Soviet dynamic protection, about which, in the publication “Steel for Wounds,” it was written without proof that they “adopted the concept of creation” of the Israeli ERA Blazer complex and the design features of the flat EHD. The concept of creating a Soviet dynamic defense began to be developed in 30 – 35 years before the first Lebanese war, in which the IDF used tanks with an ERA Blazer. Many developers of domestic dynamic protection, among which several candidates and doctors of science, are no longer alive, and they cannot adequately respond to such remarks, as well as to statements like derogatory “it turned out to be incomprehensible for specialists of the Scientific and Research Institute of Steel”.

The Israeli ERA Blazer complex was most likely created by foreign experts led by Meir Mayseless at the very end of 70's - early 80's, that is, approximately 25 – 30 years after the work carried out in the USSR at the Institute of Hydrodynamics and VNII Become. It is possible that during the mass repatriation of Soviet Jewish scientists, some of the information about our research was available to Israeli scientists and engineers. I would also like to inform readers of the MIC that in the middle of the 90-s during a visit to the All-Russian Scientific Research Institute, the creator of German dynamic defense, an outstanding ballistic scholar Manfred Held, became familiar with the “top secret” reports on research and development conducted in the USSR in 40 – 60-ies, recognized the Soviet priority in the development of explosive reactive armor.

And more - about technology

Since the adoption of the first systems of dynamic protection - the Israeli ERA Blazer and the Soviet “Contact” more than 30 years have passed. Whole era During this time, both the methods of warfare and the hardware designed for it have radically changed. Accordingly, the role and place of dynamic protection in the protection of armored vehicles. But this is a completely different topic.

The author of the letter relied only on well-known and published information. It would be reasonable and fair to remove the neck of secrecy from works of thirty years and more old, so that the country would finally learn about the creators of the defense potential, many of whom still remain nameless. Immediately there would be less unsubstantiated speculation and derogatory feedback on the work of prominent domestic scientists and engineers.

Ctrl Enter
Noticed oshЫbku Highlight text and press. Ctrl + Enter
We are
Is the "old" well forgotten to become the "new"? Part-2. At the call of honor and dutyWays to deal with tanks equipped with dynamic protection
123 comments
Information
Dear reader, to leave comments on the publication, you must to register.