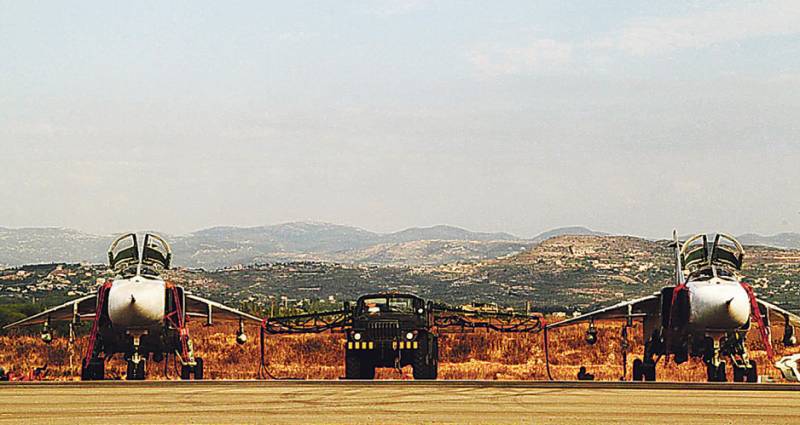 The shelling of Hmeimim became the most significant news first days of the year. Although the information about the destroyed Su-24 and Su-35 was not confirmed, many experts have already spoken about the unwillingness of the Russian army to protect the air base. One of the most common complaints was the lack of special protective caponiers.

There were also accusations that after the withdrawal of troops announced by Vladimir Putin, the contingent relaxed. Let's try to figure out how the defense of Hmeimim is actually organized (Khimki in army slang), and see how the US and NATO forces in Afghanistan and Iraq are protecting similar objects.

Prior to the commencement of the operation of the VKS RF in Syria, Khmeimim was the international airport named after Basil al-Assad. And even when the Russian base was deployed on its territory, it did not stop taking civilian flights, here the passenger terminal functions normally.

During the construction of the facility, the Syrian authorities least of all thought about its safety. The airport is located outside the city of Latakia, it is surrounded by a large number of different farms, settlements, factories. In the north, mountains begin, where it is easy to find convenient platforms for observation and shelling. Despite the status of international, the airport was never designed for a large number of aircraft, civilian aircraft had enough space on the platform opposite the terminal.

In the photos taken in 2015, it is clearly seen that the Su-24, Su-30 and Su-34 are located along the runway. For two years, the Russian military seriously expanded the airbase. There were several additional parking lots, taxiways, a large number of economic objects. But the main problem of “Khimki” remained small capacity.

Now there are three parking lots at the airport. Home is located to the left of the airport terminal. Su-24, Su-34, Su-25 as well as Su-30 and Su-35 are based there. Nearby is the TECH. Two other parking areas are located on the opposite side of the runway: one is a compact one, where fighter duty personnel are located, behind it is the largest one, where transport IL-76, DRLO A-50, and An-124 aircraft are stationed.

Also, the Russian military from scratch built a helicopter base, in fact, a new airfield, with several shelters connected to each other, with an apron and a runway.

Why Russian aircraft is not protected by caponiers? The answer is quite simple - shelters significantly reduce the place for basing. If you look at satellite images of December last year, it is clearly seen that the equipment is very dense, sometimes almost in two rows and even on taxiways. Parking is available at the TEC and civilian terminal. True, the “civilian platform” is occupied not by combat vehicles, but by transport vehicles - An-72, Tu-154, IL-76.

Of course, parking can be expanded. In particular, the main one is to the left of the terminal. There is the closest. But the object is sandwiched between the runway and outbuildings. At the same time, on request of security measures, it is impossible to bring parking to the runway. Admittedly, the Russian military faced a problem that had previously been solved by the American and British military in Iraq and Afghanistan. In 2001 and 2003, they also used civilian airports, and it turned out that they were not suitable for the safe deployment of more military aircraft.

Half the country under the base

Only one way out - the creation of large joint military bases from scratch. So the United States had a "Ballad" in Iraq, and the UK had a "Camp Bastion" in Afghanistan. And if the Americans placed the "Ballad" still relatively close to the city, then the British built their base tens of kilometers deep into the desert.

Another important feature of such objects: the airfield itself is located in the center of the base, and it is surrounded by a large number of different buildings. Such a layout makes parking vehicles as far as possible from the base, thereby protecting them from mortar and rocket attacks. And with a ground attack, militants will have to make their way to planes and helicopters through built-up areas for a long time. Therefore, in the Ballad and Camp Bastion, the vehicles did not stand in caponiers, although the bases were subjected to constant shelling of mobile groups armed with mortars and launchers.

Knowing the vulnerability of Khimki, from the very beginning of the operation, the Russian military paid close attention to defense from land in order to prevent mortar and rocket attacks. Another big danger is MANPADS calculations.

Of course, the system of protection and defense of the main Russian base in Syria is not disclosed, but if we analyze the publications and photographs, we can assume that it consists of three rings. The first is the air base itself, its perimeter and checkpoint. Here the service is the Russian military police. She patrols along the engineering barriers, as well as on the territory, checks the cargo at checkpoints.

The second ring is a position within a radius of several kilometers from the base. Most likely they are occupied by marines, paratroopers, and possibly motorized rifles. They are reinforced by units equipped tanks T-90, which can not only hit targets at a great distance, but also detect objects at night and in bad weather. Most likely, these positions block the points from where the calculation of MANPADS can bring down the plane.

The third ring - mobile special forces, and perhaps even the fighters of the KSSO, who check suspicious places in the band a few dozen kilometers around the base. Their goal is mobile groups and the identification of caches. The second and third rings are supported by helicopters, which also patrol the perimeter, search for suspicious objects and, if necessary, deliver a blow.

You can protect, you can not exclude

Judging by the available information, only in 2016 – 2017 the Hmeimim were bombarded with unguided rockets several times.

But why not create a solid perimeter? The fact is that the base area is very densely populated, dozens of villages and farms, as already noted, are close to it. Where do you want them to go before placing several defense rings in a radius up to 50 – 70 kilometers?

Now, in the area of ​​the Khmeimim airbase, several protection systems have been created, which allow to maximally weaken the effectiveness of the shelling. In particular, these are artillery radars, detecting fired missiles and mines. There are also special systems such as the Russian “Pantyr” and the American Senturion. They are able to shoot down missiles, and under certain conditions - and mines. The bases are covered by electronic reconnaissance systems, which intercept the radio communications of mobile militant groups. EW complexes, silencing communication channels and GPS signals are also actively used.

But the militants have also learned to bypass high-tech protection. For example, in Camp Bastion, mobile teams hid in road traffic, did not use communications and navigation systems. The shelling was conducted at maximum range. For this, rockets with an increased fuel reserve were used. Such products had very low accuracy, but for those tasks it was quite enough.

In the US and British armed forces, shelling is treated as an inevitable evil. Even on protected bases, their number can be seriously reduced, but it is impossible to completely get rid of mines and missiles falling from the sky. In this situation, only the correct distribution of objects in the territory saves. Simply put, the least significant objects should be in the zone of maximum risk.

So, the defense of the Russian Khmeimim base, by today's standards, must be admitted to be quite effective. But effective protection from journalists who are able to destroy any amount of equipment on the pages of their publications has not yet been found.

Ctrl Enter
Noticed oshЫbku Highlight text and press. Ctrl + Enter
We are
Russia is going to expand Khmeimim airbase in SyriaThe new concept of the Russian Aerospace Force of the Russian Federation will include a radical response to the Turkish aggression against the Su-24M
49 comments
Information
Dear reader, to leave comments on the publication, you must to register.