January 10 2018
46
The large landing ship Ivan Gren of project 11711 (according to NATO codification by Ivan Gren) will soon become the most modern BDK as part of the Russian fleet. BDK "Ivan Gren" is intended for landing, transportation of military equipment, as well as various equipment and cargo. In total, two ships of this project were laid for the Russian Navy. The lead ship, Ivan Gren, is undergoing the final stage of state trials, the second Peter Morgunov DBK is preparing to launch. The Russian military refused to build further ships of this project in favor of creating even larger and larger vessels of this class.


At the end of December 2017, the general director of the Yantar Baltic Shipyard, Eduard Efimov, told reporters that the large landing ship Ivan Gren had entered the final stage of state trials. Shortly before this, the newest Russian ship conducted its first shootings and checked the naval artillery in the Baltic Sea. It is worth noting that the “Ivan Gren” ship with a very difficult fate, it was laid in Kaliningrad still 23 December 2004 of the year, but was only launched 18 in May 2012 of the year and is still not included in the fleet. At the initial stage, the assembly of the ship was seriously complicated by unstable financing and problems at the enterprise itself.

At the same time, a new ship in the Navy is no doubt waiting. Putting it in the fleet will significantly expand the capabilities of the Russian Navy at sea and in remote regions of the planet. Project 11711 landing ship of the Ivan Gren ocean zone will be able to take on board up to 300 marines, as well as 13 main combat tanks (weighing up to 60 tons) or a choice of up to - 36 armored personnel carriers / infantry fighting vehicles, military equipment is located on the tank deck. Also on board the ship there is an indoor hangar and a take-off area for helicopter equipment. It can take on board up to two Ka-29 transport and combat helicopters, or Ka-27 search and rescue helicopters. If necessary, the Ka-52K Katran attack helicopter will be able to accommodate it on board. 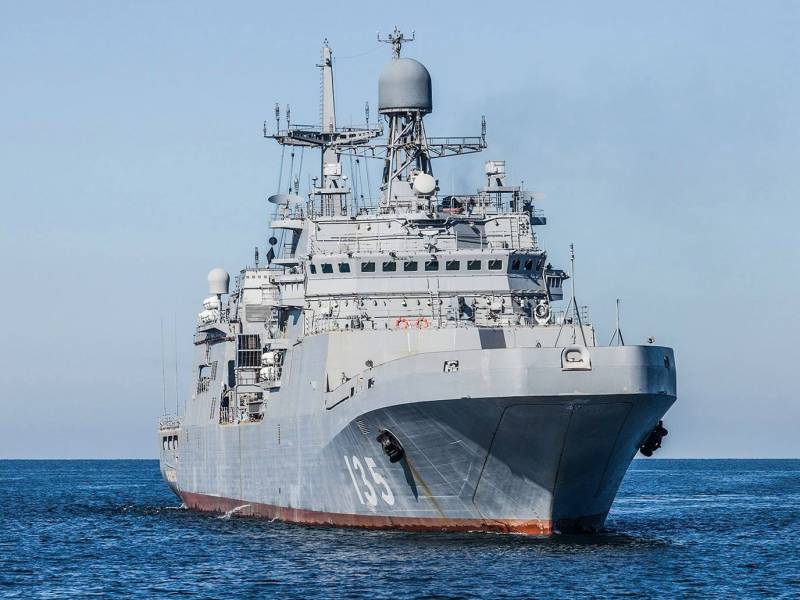 The large landing ships of the 11711 project are a further development of the Soviet BDK of the 1171 "Tapir" project. The design of the ships of the new project involved the Neva Design Bureau. The ship hull of the 1171 project was taken as a basis not by chance, it proved to be excellent for decades of service as part of the Soviet, and then the Russian fleet. In this case, most of the structures in the framework of the new project has undergone significant changes. Mainly superstructures were redesigned and the interior of the amphibious ship. During the construction of the Ivan Gren BDK, the most modern technologies were used, in particular, aimed at reducing visibility through the use of modern technical solutions and materials. In addition, special attention was paid to the conditions of placement of the crew and paratroopers. On board the BDK appeared gym, dining room, as well as more comfortable cabins and cabins.

Loading of military equipment on the ship can be performed either independently on ramps or with the help of cranes. Loading cargo and equipment in the troop compartment can be carried out through the cargo four-wing hatch, located in the upper deck using a crane with a lifting capacity of 16 tons. For loading aboard motor boats, boats and equipment on board there are also two boat cranes. Among other things, the cargo hatch of the ship can be used for ventilation, removing the exhaust gases, working equipment from the under deck (airborne compartment). Ventilation of the troop compartment is very important because it allows the equipment to be transported to warm up the engines, which is very important in conditions of low air temperatures. The exhaust gases of the idling machinery quickly fill the landing bilge, so ventilation through the upper cargo hatch is simply necessary, thanks to this, the paratroopers will not be poisoned by the exhaust gases.

The main feature or "chip" of the 11711 project ships is the so-called non-contact method of landing troops on an unequipped coast. For this purpose, engineering pontoons can be pushed out of the open nasal shutters, which, when coupled, form a bridge to the shore. This pontoon bridge is docked with the shore where the landing takes place, after which it is used to transport heavy equipment and marines. This landing scheme allows you to maintain a distance between the BDK and the coast, seriously reducing the risk of running aground. 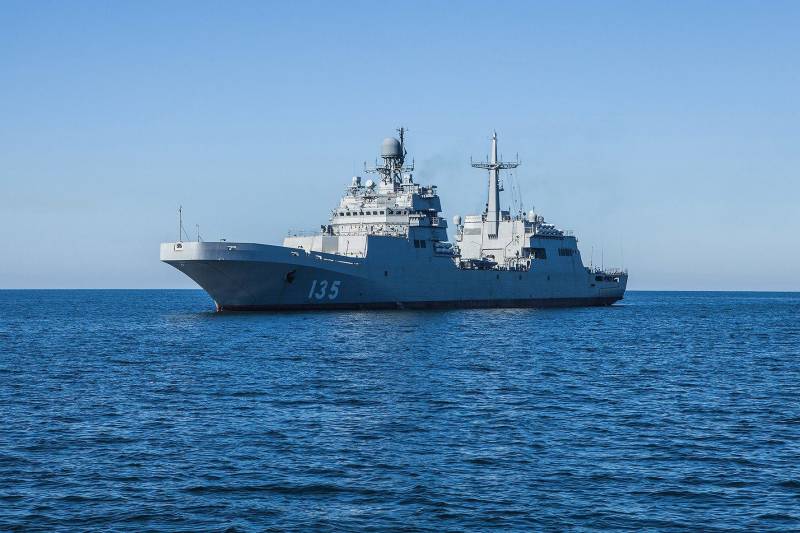 Opportunities BDK "Ivan Gren" allow him to transport by sea tanks, infantry fighting vehicles, armored personnel carriers, army trucks or towed artillery at a distance of 3,5 thousands of nautical miles (at a speed of 16 knots). Military equipment is transported on the so-called tank deck. The equipment on board can be loaded in different ways: by a deck or gantry crane, it can also board the vessel under its own power through the stern ramp. In addition to military equipment, BDK can carry a variety of cargoes, including standard 20-foot sea containers. In standard 20-foot sea containers, among other things, the Club-K missile system, which is a modification of the Caliber missile system, can be placed. At the same time, it is unlikely that any missile complexes will appear on board the Ivan Gren BDK, since countering enemy ships is not part of its direct mission.

Light floating armored personnel carriers, infantry fighting vehicles and BMD can be released into the sea directly from the stern and bow of the ship, they are able to get to the shore on their own. The landing is possible when the sea is agitated up to 4 points. Due to the range of the course, "Ivan Gren" has the ability to remotely drop airborne, he is able to patrol a specific region for a month, the autonomy of navigation is exactly 30 days.

The total displacement of the assault ship is 5 000 tons, length - 120 meters, width - 16,5 meters, draft - 3,6 meters. The heart of the Ivan Gren BDK is two 16-cylinder V-shaped diesel 10Д49 with a gas turbine supercharged horsepower 5200. Powerplant capabilities allow you to accelerate the ship to a maximum speed of 18 nodes. The crew of the ship consists of 100 people. The most modern BDK in the Russian fleet before the advent of ships project 11711 were BDK project 755 Polish built. The Ivan Gren surpasses them in displacement - 5000 tons versus 4080 tons in 755 ships, in addition to this, the new Russian landing ship is longer on 8 meters, wider in 1,5 meters and sits deeper in the water. Accordingly, the above and its amphibious capabilities. 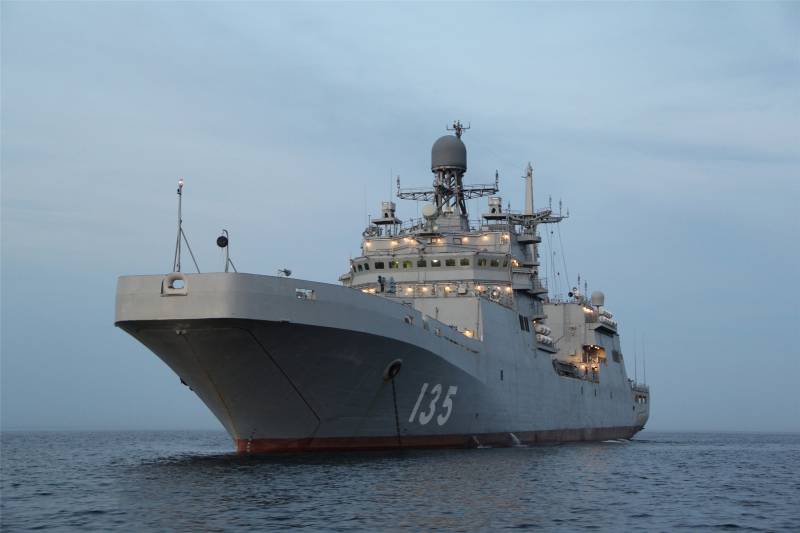 As part of work on the project and the construction of the ship, its weapons have changed. According to the original project, one 76-mm AK-176M artillery mounts, two Palash anti-aircraft artillery complexes and two Grad-M A-215 rocket launcher systems were to appear on board the BDK. However, due to the fact that the concept of using the BDK project 11711 has undergone changes, and to save money and time to build a ship in 2010, it was decided to change the composition of weapons, which today is purely defensive in nature.

AK-630-2 "Duet" is a modern two-automatic 30-mm automatic artillery mount, which provides a huge rate of fire - up to 10 000 rounds per minute. Its main purpose is to provide missile defense for Navy ships in the near zone. First of all, it is intended to destroy anti-ship missiles and other types of controlled weapons. Also, the installation can solve the problem of hitting enemy aircraft, helicopters and UAVs, small surface and coastal targets. The effective firing range is 4000 meters. 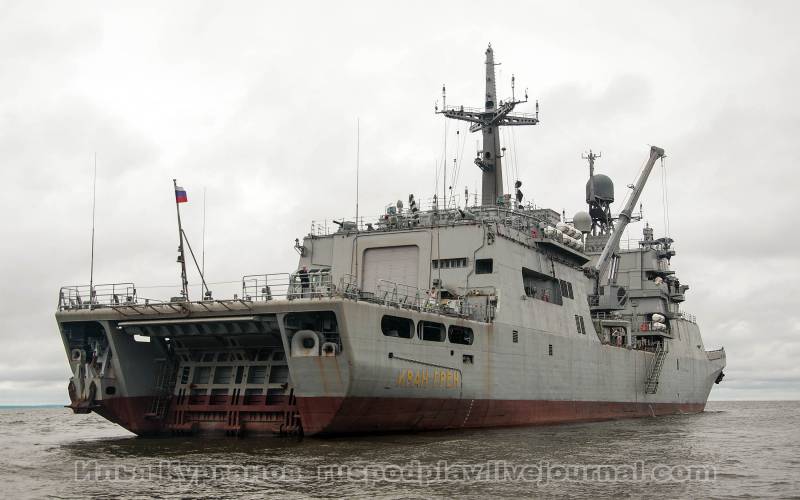 The AK-630М-2 and АК-630 units are built according to the scheme of multi-barreled weapons (6 barrels) with a rotating barrel unit (the so-called Gatling scheme). Automation of Russian installations of this type works at the expense of the energy of powder gases and, unlike foreign analogues (Phalanx CIWS and Goalkeeper), does not require external sources of energy to rotate the block of barrels. Installed on the landing ship "Ivan Gren" installation AK-630М-2 "Duet" was a further modernization of the complex AK-630М1-2, which visually differs from the tower, which received less radar visibility.

In addition to high-speed artillery weapons on board, there are two large-caliber machine guns. This MPTU "Sting" - 14,5-mm naval thumb machine-gun installations, which are designed to combat air, surface and coastal lightly armored targets. Large-caliber machine guns can effectively hit lightly armored objects at a distance of 2000 meters and 1500 meters in height. For firing at air, surface and coastal targets, cartridges with an armor-piercing incendiary bullet B-32, an armor-piercing-tracer bullet BZT, as well as an instant-action incendiary bullet of MDZ are used.

On the Internet and various media it was possible to find allegations that the new Russian BDK of project 11711 were supposedly a kind of replacement built in France, but never transferred to the Russian Federation - universal landing ship-docks of the Mistral type, but this is absolutely wrong. Firstly, the construction of the Ivan Gren BDK began long before the decision of the Ministry of Defense to acquire Mistral in France, and secondly, it is difficult to compare ships even in terms of their technical capabilities, mainly their size. It is incorrect to compare them due to the huge difference in displacement (more than 4 times), as well as size aviation groups (Mistrals can carry on board up to 16 light helicopters). 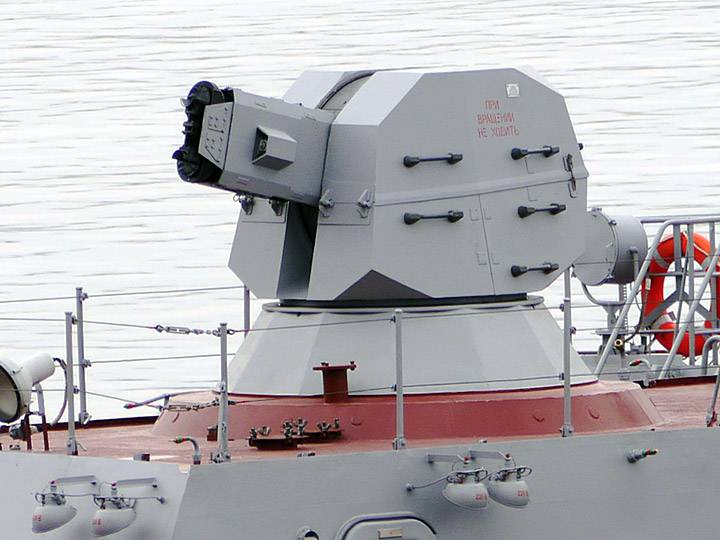 AK-630-2 "Duet" - Russian naval two-automatic 30-mm automatic artillery installation
More correct is the comparison of the new Russian BDK project 11711 with the Chinese ships Type 072-III (class Yuting-II), which are large tank landing ships, which are the main amphibious means of the PRC naval forces. With similar characteristics and size, the Russian project to the advantageous side is characterized by the presence on board of a full-fledged helicopter hangar.

Despite the fact that Russian naval sailors are not interested in further acquiring the BNC project 11711 (information about this appeared in 2015 year), abandoning them in favor of larger ships of the new generation, it is too early to put an end to further prospects for the BDK project 11711. Currently, the ship already has an export passport, which is why Russia can move it for export. This was reported by the TV channel "Star" with reference to Sergei Vlasov, who is the general director of the Nevsky Design Bureau. Judging by the official catalog of the United Shipbuilding Corporation (USC), we are talking about the project 11711E, which received a displacement increased to 6600 tons.

For larger landing ships, which in the future may appear in the Russian fleet, can be attributed ships of the project "Surf". Within the framework of the Army-2015 forum, a mockup of the universal landing ships of the Surf project with a displacement of more than 14 thousand tons and up to 500 paratroopers, 20-30 tanks or 60 units of various military equipment was presented for the first time. Among other things, the data of the ships will be able to take on board the Ka-8 or Ka-27K helicopters up to 52.

Ctrl Enter
Noticed oshЫbku Highlight text and press. Ctrl + Enter
We are
Launching of the water complex "Peter Morgunov" postponed for the summerThe future of the 11711 BDK is defined.
Military Reviewin Yandex News
Military Reviewin Google News
46 comments
Information
Dear reader, to leave comments on the publication, you must sign in.