Moscow cadets took oath in the Hall of Military Glory

January 9 2018
29
December 22 The 2017 of the Year in the Moscow Victory Museum took the solemn oath of the cadets of school No. XXUMX. The school proudly bears the name of Hero of the Soviet Union General Kolesnik Vasily Vasilyevich, the organizer of the plan for the capture of Amin’s palace and its performer.


Before taking the oath in the Hall of Fame, a colorful installation was demonstrated, which was a video about the exploits of the heroes of World War II, projected onto the dome of the hall, as well as to the walls adjacent to it. 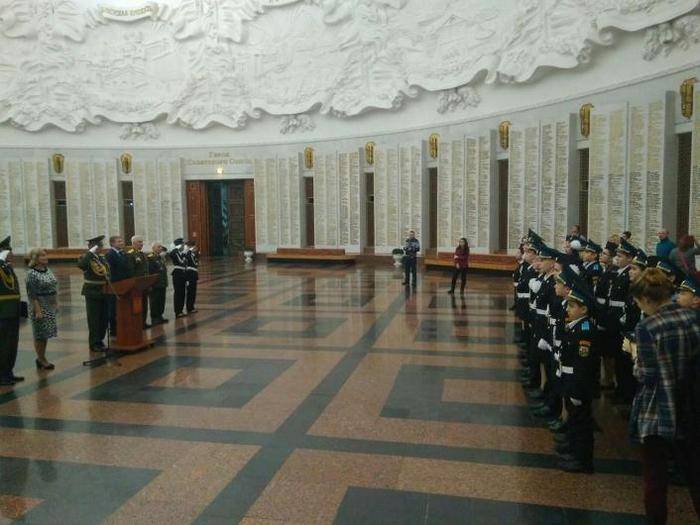 Pupils of School №1590 came to congratulate the Deputy of the State Duma of the Russian Federation Dmitry Skrivanov:

Being in the Hall of Fame of the Victory Museum, you can see how many people committed the feat in the name of our country. They are united by the love of their own homeland. Today you swore an oath to serve your fatherland. I don’t know how fate will decide and who among you will become what, but I definitely know that this very oath will unite you. The words spoken by you today and love for the fatherland can be checked in different life situations and this is exactly what will move you forward and our Motherland. Facing everyday life, many of you will be asking yourself the question - why do not I run around the yard and do not play with other children, but have to obey discipline, constantly learn and give a lot of energy to become a cadet? The answer is very simple - you invest in yourself and your own future. Love for the Motherland is also love for oneself, including. I believe that the oath you made today will lead you through life. I wish you that you always remain worthy people and remember the words spoken that day. 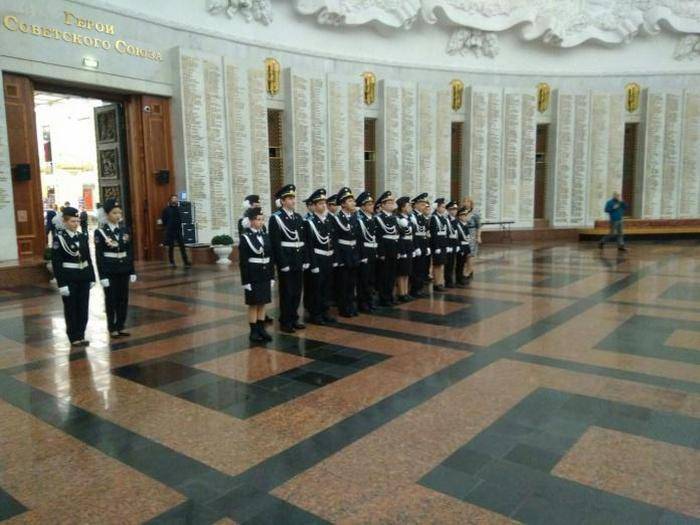 The tutoring officer of school No. XXUMX, Colonel Yury Titov told about the main purpose of cadet education:

Pupils of cadet corps learn, first of all, to serve the Motherland, without limiting the children's horizons. We do not make them military, they can become what they themselves want. Our main task is to instill in them order, discipline, punctuality and responsibility. In addition to general educational disciplines, we teach students drill regulations, fire training, and training in defense against weapons mass destruction, military medical training, topography, ethics, which are so lacking in the modern system of general education, music, and also choreography. In addition, our cadets regularly participate in various events, for example, in the International Kremlin Cadet Ball, held annually on December 12. Also pupils of the cadet school constantly visit museums and educational exhibitions and meet with the heroes of our Fatherland, for example, they organized a meeting with cosmonaut Alexei Leonov twice.

School number XXUMX became the pioneer of the pilot project “The Cadet Movement in Moscow”, whose students regularly participate in various patriotic actions that are held in the capital. Since 1590, the cadet school has been actively participating in parades on Poklonnaya Hill, as well as in ceremonial marches on Red Square on November 2014. Since 7, the institution has been involved in the movement for the deployment of detachments of the youth military-patriotic social movement "Unarmia".