January 9 2018
9
This week the number of attacks continued to decline. In the DPR before the armistice per day, there were 30-40 attacks, now a week only 17 times, in the LC the level of attacks also decreased to 5 once a week. But, the number of flights UAV APU. Well, we in turn try to knock them down. 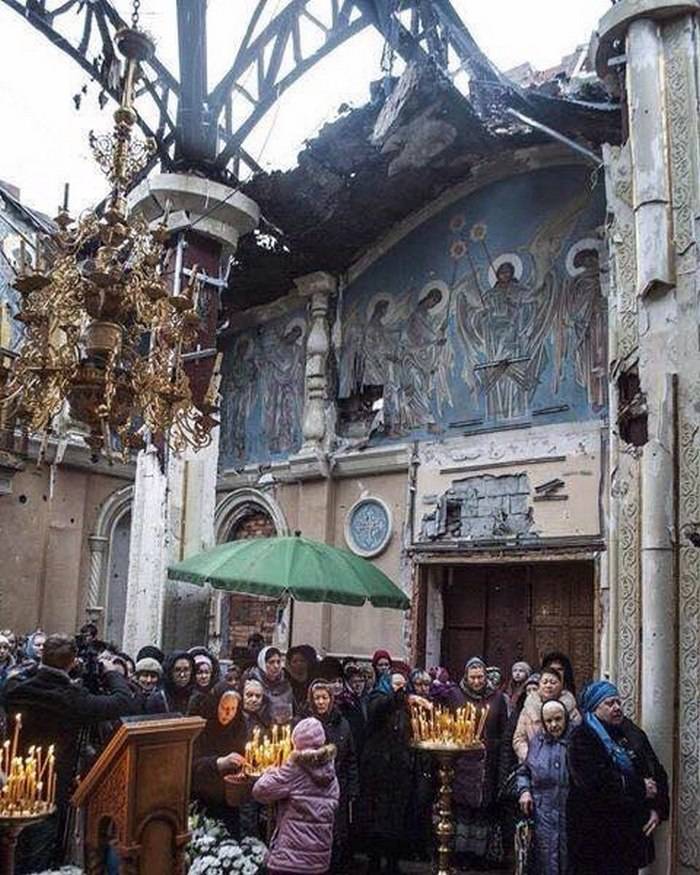 In general, I believe that this is the first truce and the first Orthodox holiday, which was not overshadowed by heavy casualties among civilians. But, unfortunately, this week one VSDNR soldier was wounded from a mine shard and another was killed by sniper fire.
DNR:
The Ukrainian army, taking advantage of the declared truce, continues to regroup its units, including those located near the contact line.
In its report on 4 in January, the OSCE mission noted the absence of 12 self-propelled howitzers of the 122-mm caliber “Gvozdika” in the places of withdrawal of Ukrainian heavy equipment. There is no doubt that this and other heavy artillery of the Armed Forces of Ukraine at this moment is located at the line of demarcation and is safely hidden until planned by the command of the ATO offensive.
Judging by the analysis of the main movements, columns of automobiles and armored vehicles, as well as changes in logistics in the supply of material resources for the formations and units, we can conclude that the Ukrainian Armed Forces are preparing for likely active provocative actions in the Mariupol area.
According to the intelligence of the DPR army, the planned XBNUMX Ombre (a separate mechanized brigade), planned for arrival by mid-January, is in fact being reinforced already in the area of ​​the settlement. Volnova 93 th Ombre.
In addition, in the area of ​​n. Mariupol, in the area of ​​responsibility of 59-th ombbr (separate motorized infantry brigade), the enemy strengthened aerial reconnaissance using UAVs and reconnaissance groups.
LC:
Intelligence continued to detect along the line of military contact the presence of arms and military equipment of the Armed Forces of Ukraine prohibited by the Minsk Agreements.
- in the areas of populated areas Popasnaya, Krasny Pakhar and Myronivka, the firing positions of the X-NUMX-mm howitzer D-122 from the 30-th separate mechanized brigade of the Armed Forces of Ukraine were revealed.
- in the area of ​​the settlement of Dmitrovka, Novoaydarsky district, there are eight tanks from the tank company of the 80th separate airborne assault brigade of the Armed Forces.
- in the Popasnaya district, two ACS 2С1 "Gvozdika" were found on the territory of the railway depot.
- in the Novozvanovka area, six units of disguised 10-mm anti-tank guns MT-100 "Rapier" are located at the positions of the 12 of the separate APU mountain assault brigade.
The main amount of Ukrainian equipment and weapons located on the line of contact is regularly reflected in the daily official reports of the OSCE Special Mission as absent from storage sites, detected as a result of control of the withdrawn weapons. So, this week in the OSCE reports recorded the absence of units:
- eight X-NUMX-mm towed howitzers D-152;
- five 152-mm towed howitzers "Hyacinth-B";
- six X-NUMX-mm towed howitzers D-122 "Frog";
- 10 120-mm mortars M120 and 2B11;
- four tanks T-64 and T-72;
- seven 100-mm anti-tank guns MT-12 "Rapier";
- Six 85-mm anti-tank guns D-48.
Now, as for the battles and shelling that took place this week.

11: 18 Petrovsky district of Donetsk, our air defense shot down the UAV APA.
16: 00 in the Airport area positional shootout.
21: 00 north of Gorlovka in the Zaitsevo and Golmovsky area, shelling mortars with a caliber of 82-mm.
22: 03 Dokuchaevsk our air defense shot down UAV APU.
Over Saturday, the APU fired at DNR 4 times.
The areas of four settlements of the Republic, which were used mortars, rocket launchers and small weapon.
For Saturday in LNR attacks from the side of the Armed Forces of Ukraine was not recorded. The cease-fire was respected.

On this day, neither in the DPR, nor in the LPR, no shelling was recorded. The cease-fire was respected.

18: 40 in the Kalinovo area (LNR) battle using machine guns and grenade launchers.
21: 00 in Popasnaya (LPR) shelling with mortars of 82-mm caliber.
22: 40 Petrovsky district of Donetsk battle with the use of k / k machine guns and mortars.
APU fired DNR 3 times.
On the Gorlovsky direction, the village of Zaitsevo was fired upon; in the Donetsk region, the Trudovskiy in the Petrovsky district of Donetsk and Spartak, on which 82-mm mortars, grenade launchers and small arms were used.
On Tuesday, the APU fired at LC 2 times.

10: 45 the Ukrainian side carried out another provocation in the Marinka KPVV area. At the moment of accumulation of civilians on it, the checkpoint was shelled with a large-caliber machine gun. After that, in anticipation of a return fire from the DPR Armed Forces, the Ukrainian side unilaterally closed KPVV. But the forces of the DNI army did not open the return fire. Interestingly, at that time, representatives of the OSCE mission were in the KPVV area.
11: 00 - 17: 00 on the southern front of Kominternovo shelling from to / to machine guns, grenade launchers and mortars.
15: 45 in the Kalinovo area (LNR) battle with the use of k / k machine guns and mortars.
15: 50 west of Gorlovka, firing mines with a caliber of 120-mm.
19: 50 in the Zaitsevo shooting area, periodically mortars.
On Wednesday, the APU fired at the DNI 3 times.
The areas of the settlement were subjected to shelling by the Armed Forces of Ukraine. Dolomite, Trudovskie in Petrovsky district of Donetsk and Zheleznaya Balka, which were used for grenade launchers and small arms.
On Wednesday, the APU fired at LC 1 times.

12: 00 on the southern front of Kominternovo is again under mortar fire.
16: 00 in the area of ​​Stakhanov (LC), firing mines with a caliber of 120-mm.
19: 10 Proletarsky district of Donetsk, our air defense shot down the UAV APA.
19: 30 Lugansk in the eastern suburbs of a mine explosion. From the explosion of the damaged fence.
20: 07 Gorlovka our air defense shot down the UAV APA.
During the day, the APU fired at DNR 2 times.
Areas of settlements in the Gorlovsky direction, which were used by infantry fighting vehicles, grenade launchers and small arms, came under fire from the Armed Forces of Ukraine.
In the LPR on Thursday no shelling was recorded.

14: 05 on the Svetlodar arc in the areas of Logvinovo and Kalinovo (LC) battles with the use of c / c machine guns, grenade launchers, AGS and mortars 82-mm and 120-mm.
15: 30 in the Nizhnee Lozovoe shelling of our positions from LNG-9 and AGS.
20: 00 North of Gorlovka under fire. Mortars 82 and 120mm, armored vehicles, AGS, RPG.
23: 30 on the Svetlodar arc continues to thunder fights with the use of K / K machine guns, grenade launchers, AGS and mortars.
23: 50 Logvinovo under bombardment of mortars 120-mm caliber.
On Friday, the APU fired at the DPR 4 times. Killed one soldier of the Armed Forces of the DPR.
On Christmas Eve, the APU fired 6 with mines of 120-mm caliber, grenade launchers and small arms Lenin, as well as grenade launchers and small arms n. Zaytsevo.
During the day, the APU was fired at LC 3 times, using 120 and 82 mm mortars, LNG and AGS. The positions of NM of the LPR in the area of ​​the settlement were subjected to shelling. Logvinovo and Lower Lozovoe.


In total for the week:


APU fired DNR 17 times. One was wounded and one soldier of the Armed Forces of the DPR died.
In total, since the start of the declared truce, since December 23, 37 violations of the “New Year Truce” have been recorded, more than 500 ammunition has been released in cities and towns of the Republic. The shells were subjected to areas of twelve settlements of the DPR.
APU fired at LC 5 times. In total, 115 shells, mines and grenades were fired on the territory of the Republic.