Project "ZZ". "Communist" and "dreamer" against the "king"

January 9 2018
438
A new critic of President Putin, Pavel Grudinin, has become incredibly popular in Russia, the American press writes. This man, who wants to become president, has a whole army of supporters, "tired" of the permanent owner of the Kremlin and his oligarch friends, and this brings together Grudinina’s audience with Navalny’s audience. 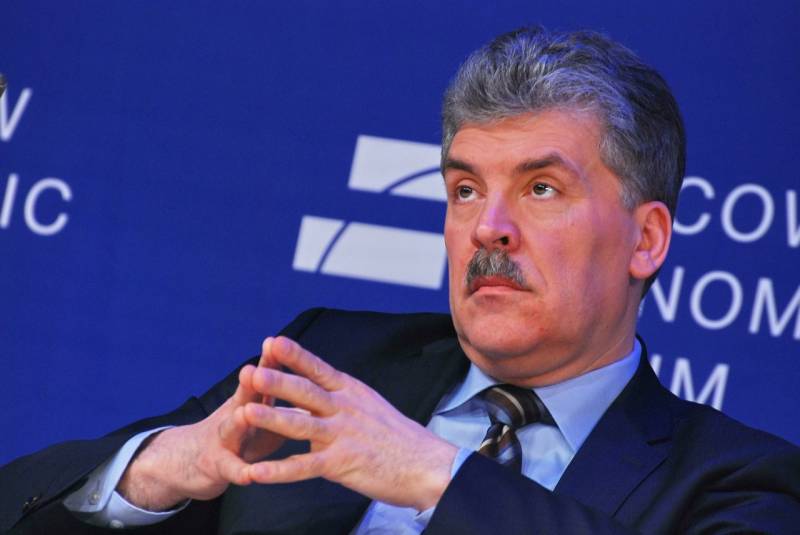 Grudinin’s audience, according to Western analysts, is about the same as that of Navalny: they are Russians whom Putin has long been tired of in power. Grudinin is not afraid to make fun of V. V. Putin’s dependence on such people, who are actually “long ago” in prison.

However, experts doubt the victory of so brave Grudinina in the elections. But he has a chance to come to the finish line in the second race. And it is also worth a lot.

That is why the critical statements of Comrade Grudinin, who suddenly appeared on the political arena of Russia, where, as was considered until now, Putin "has no one to replace", created a new topic in the American and European press.

As David Filipov writes in «The Washington Post»This candidate for the presidency "has no chance against Putin." However, man "is inherent desire for a dream." 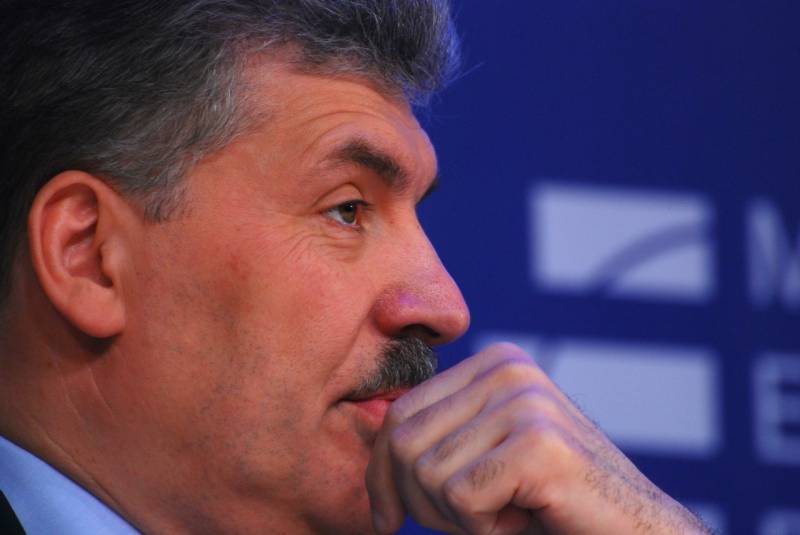 This presidential contender has a whole nationwide "political machine" and there is an audience consisting of "millions of people" who are "fed up with the current Kremlin owner and his oligarch friends."

Of course, Putin will win the new election, and win them with the “overwhelming majority” of the votes. And he has another six-year term ahead. Nevertheless, Grudinin has a "good chance."

Pavel Grudinin was an "unexpected candidate" from the Communist Party of the Russian Federation, the journalist said. Grudinina named Gennady Zyuganov himself, 73, the summer leader of the party who participated in the elections four times already.

57-year-old Grudinin is the manager who turned the former state agriculture outside of Moscow “into a thriving business,” which he presents as a “demonstration of socialism,” Filipov writes. And this very “socialism” comrade Grudinin promises to return all of Russia.

Like Navalny (excluded from the ballot in the past month), Grudinin appeals to the Russians, "tired of Putin, who has been in power for 18 years." In his videos, the author continues, Grudinin openly makes fun of Putin’s dependence on people who, as "everyone knows", must "be in prison for a long time", and promises to repatriate home billions from offshore accounts opened by Russian "elites".

Like Navalny in the past, Grudinin appeals to Russian nationalists. Both speak out against economic migrants from Central Asia. Both also claim that Russians do not live as well as people in the West.

“I think that the Russian people should live better than the people we won in the war,” Grudinin said recently at the popular political talk show “Evening with Vladimir Solovyov” (meaning the life in Germany, the journalist said).

Grudinin appeals to Russians who regret the collapse of the Soviet Union in 1991. And there are a lot of such people: according to the latest survey, their 58%. Grudinin can show these people something that neither Navalny nor Putin can give: the state farm named after Lenin, the former Soviet economy, which Grudinin himself transformed into a "socialist oasis in the capitalist jungles of Moscow's suburbs."

The Lenin Sovkhoz, continues D. Filipov, delivers fruits and vegetables to supermarkets in Moscow. Grudinin, who told Solovyov that his income last year amounted to 20 million rubles (about 351 thousand dollars), said that his employees receive about 1370 dollars a month, and this salary is more than twice the average for Russia. In addition, employees are guaranteed medical care, education for children and housing.

Putin on this background looks extremely pale. Speaking at the congress of the political party "United Russia", he promised to fight corruption, offered more incentives to business, and also promised to allocate money for the currently poorly funded health care and education systems.

“But it’s risky to make new promises to the president: after all, what did he do for eighteen years?” Wrote Russian journalist Andrei Pertsev in the material for the Moscow Carnegie Center. According to this expert, Grudinin meets two people's needs: first, with his promises of a better life, and second, with criticism of those who "are now in power."

Filipov assumes that the further Grudinin’s campaign goes, the higher his recognition among the people will be.

But how far will it all go?

Russia's political system under Putin consists of communists along with ultranationalists from the Liberal Democratic (“erroneously so designated”) party of Russia, headed by another “permanent presidential candidate”, Vladimir Zhirinovsky. The Communists and this so-called liberal are considered to be something of a “systemic opposition” and a “technical” alternative to Putin and United Russia. In fact, both the Communists and the Liberal Democratic Party rarely "try to block the Kremlin’s policies, if they ever did it." D. Filipov does not remember when the last time “Zhirinovsky or Zyuganov would have said that it’s time for Putin to leave.”

And now Grudinin appeared. How sincere is he, claiming that he really wants to replace Putin?

Russian analysts, the author develops the idea, believe that Grudinin’s candidacy "is part of a Kremlin project to increase voter turnout." “The Communist Party is a pro-government party integrated into the state political system, so no one should consider the decision on its campaign as an unexpected trick for the authorities,” political analyst Yevgeny Minchenko commented on Grudinina’s nomination.

So is there a chance for Grudinina? Who knows!..

But the West, at least, had a good reason to pay attention to the election campaign in Russia, the journalist points out, and not just Navalny.

According to the political commentator of the influential German newspaper «Süddeutsche Zeitung» Frank Nienhuysen, March election 2018 year "will not bring surprises." Ninhuizen sees not even an election, but a performance: here is Ksenia Sobchak, who will speak maliciously about the country's leadership; Here are the Communists, who, "as an exception," pretend that they are unhappy with the power ... Who else? A whole crowd wants to run, and its very existence means the formal existence of “pluralism” in Russia: they say, any way is open to the Kremlin. This is all ridiculous; Putin’s “Tsar” will remain in the Kremlin: he is already preparing to take over the reins of government. True, he will have a hard time: it is during this period that Putin will have to decide the question of a successor.

There is another sharp question: Putin should use the next six years to modernize the country's economy, otherwise history he will enter as the president of the period of stagnation - after all, almost all attempts to carry out reforms ended in failure.

China managed to become one of the leading economic world powers, but Russia did not, the author believes. The country is still dependent on energy exports, and bragging to the Kremlin-controlled media is worthless. The current youth understands this. Putin probably also understands something: he is president, and he should contribute to the growth of the well-being of the Russian people. Will he be able to do this? Hardly, Ninghuizen believes, because for this you need to “loosen your grip” and give the people more “economic and social freedoms”.

Noting the rapid growth in popularity of the communist nominee Grudinin, who doesn’t stand behind empty words, but real deeds, Western commentators still believe that VV Putin will be the winner of the 2018 elections. On the other hand, then, apparently, the struggle for the victory in the elections of the 2024 of the year, in which the “tsar” Putin cannot take part, will begin. And then, Grudinin’s victory is quite probable, if only he does not back down from his idea of ​​becoming a president and building socialism in Russia.

There is also an opinion that Comrade Grudinin is a candidate not an independent, but a “Kremlin project”. The project aims to increase attention to the elections and, consequently, to a greater turnout. Exactly the same opinion was previously expressed in relation to another candidate - Ksenia Sobchak; therefore, the commentators are not original here.

In any case, the growing popularity of Pavel Grudinin means that a real new contender has appeared on the political horizon of the country. And all those who still considered Putin "irreplaceable", were surprised to see a potential replacement, and behind it they found a fairly wide public audience.

Ctrl Enter
Noticed oshЫbku Highlight text and press. Ctrl + Enter
We are
Pavel Grudinin: a real alternative to the electionResults of the week. “Excuse me, aren't you crazy?” - “No. I have a certificate "
438 comments
Information
Dear reader, to leave comments on the publication, you must to register.