The second facet of the Raptor incident in the sky above the Euphrates: an unvarnished assessment. Future denouement prospects in Syria 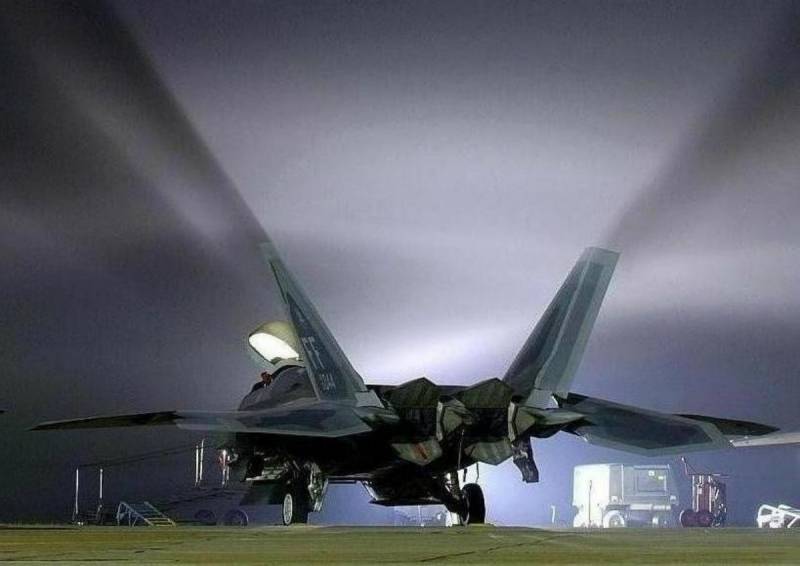 As was originally known, the anti-terrorist operation of the Syrian Arab army and its friendly units with the support of the Russian Air Force in the Syrian theater of operations was undertaken with the aim of eliminating the largest terrorist wing of ISIS (banned in the Russian Federation), which successfully feeds similar cells in the countries of the Near East and Central Asia. This fact was confirmed immediately after the receipt of information on the material and technical support of the pseudo-caliphate using the military transport aviation US Air Force, which for a long time delivered thousands of tons of humanitarian aid to the territory controlled by IS weaponas well as modern digital radio communications and network-centric equipment for the exchange of tactical information.

In parallel with the suppression of thousands of terrorist enclaves, the Russian military contingent in Syria also solved another, no less important strategic task: on the basis of a military airfield in Khmeimim and a naval base / military-industrial complex in Tartus, it secured a long-term presence in the Middle East region, allowing careful monitoring of the actions of the combined NATO Navy in the East The Mediterranean. First of all, this concerns the establishment of A2AD submarine borders to deter American SSBN carriers of strategic cruise missiles BGM-109E "Tomahawk Block IV" in the central part of the Mediterranean Sea by means of ultra-low-noise diesel-electric submarines on alert, Project 636.3 Varshavyanka and patrolling anti-submarine aircraft Il -38N. From these lines, the possibility of massive missile attacks on Central Russia, the Krasnodar Territory and the Volga region with the American fleet decreases to zero, which in a global conflict will significantly increase the survivability of our air defense due to the unloading of dozens of anti-aircraft missile divisions and regiments in the Southern Military District.

Secondly, the continued presence in Syria of Russian military infrastructure, tactical air wing and contingent has an excellent deterrent effect on the Syrian Democratic Forces (Kurdish YPG / YPJ units), supported by the Marine Corps and the US Special Operations Forces and planning a large-scale offensive operation on the territory belonging to the pro-Turkish "Syrian Free Army", as well as controlled by the Syrian government forces. The opinion of some of our and Syrian experts, as well as delusional media conversations that the Kurds are ready to unite with the Syrian government forces in order to coexist quietly with Turkey, Iraq and Iran, is absolutely inconsistent with the real situation. So, for example, January 7, 2018, news The resource www.iarex.ru, citing the Asharq al-Awsat inter-Arab newspaper, reported on the upcoming publication by the Trump administration of an American vision of the partition model of Syrian territory. In simpler terms, Washington and the Pentagon will put all the "players" in the Asian region before the fact that more than 24 thousand square meters. km of Syrian territory east of the Euphrates (in the provinces of Raqqah, Deir ez-Zor and Hasek) are under the direct control of the US Armed Forces and the Kurdish units forming the SDF. The remaining territories east and north of the Euphrates will be controlled by the SDS with American military support.

In addition, on the basis of the Kurdish detachments (at the official level) and the militants of the IG / "Dzhebhat an-Nusra" (unofficial), the Pentagon and the special services of Western European states are already creating such military formations as the "New Syrian Army" (NSA) and "The Army the north of Syria ”, ultimately, according to the White House, they should become a full-fledged Armed Forces of Syrian Kurdistan, which is the so-called democratic confederation. To exclude the likelihood of an offensive by the Turkish and Syrian armies, Washington decided to take extreme measures. In particular, according to the statement of US Secretary of Defense James Mattis, not only US military instructors will go to Rozava, but also an impressive US diplomatic corps, permanently consolidating the US presence in the Syrian Arab Republic. Unfortunately, this event parries a statement by Russian President Vladimir Putin, made at a press conference following the Asia-Pacific Economic Cooperation Summit, in which our leader stressed that with the joint efforts of the Russian Aerospace Forces and the Syrian Armed Forces, they managed to "preserve the territory of Syria." In fact, more than a third of the territory is now controlled by the Americans.

And as we understand from the example of the 23 incident of November 2017 of the year in the airspace over the west coast of the Euphrates (over the neighborhood of Meyadin), the US command in Syria will be extremely sensitive not only to crossing the air borders over the Euphrates, but also to a regular approach to by him. During the spot work of a pair of Su-25 attack aircraft along the ISIS fortified area, an American F-22A Raptor air superiority fighter suddenly appeared at the riverbed. Using sophisticated wing mechanization (advanced ailerons, flaperons and socks), as well as an elevation-controlled thrust vector, the American pilot began to perform unprofessional and aggressive maneuvering next to our assault link "Rooks". Also in the course went infrared traps. In other words, "Raptor" created difficulties to carry out a strike on the object of terrorists.

However, this is not surprising given the events taking place in Al-Shadlah during the storming of Abu Kemal, when ISIS groups escaped from the city on the eastern bank of the Euphrates under the protection of the British SAS and the American F-15C / E air guards were evacuated in the direction of Haseke province where they are now safely preparing for the transition to a new “level” of militants under American law. It was after the incident with Raptor that we first heard from the mouth of the representative of the Central Command of the US Armed Forces, Damien Pikart, a very curious and revealing statement about the alleged "violation of US airspace over the eastern coast of the Euphrates by Russian military aircraft" Just imagine, it turns out that after several years of illegal presence in Syria, the US armed forces even managed to designate their own airspace here! And, in particular, where there are unfinished Igilov "boilers"! The thought is very clear.

We will move from the military-political aspects to the review of the tactical and technical details of the incident with "Dryers" and "Raptor". It is known that some time after the start of the dangerous maneuvers F-22A, the multi-purpose fighter Su-35С “Flanker-E +” of the Air Force of Russia promptly arrived in the Meyadin area. The car moved closer to the “American” at a distance of visual visibility and the possibility of entering the dogfight / dog dump (near air), which eventually cooled the heat of the latter and the Raptor withdrew in the direction of the airspace of Iraq and Saudi Arabia. The result is quite expected, since in the conventional melee air combat, the F-22A had practically no chance of “taking the tail” of our “Flanker”. Vserakursny thrust vectoring two turbofan engines AL-41F1S (15 of degrees in elevation and azimuth plane with an angular velocity 60 deg / s) makes Su-35S in 3 times more responsive to movements of the control handle machine than the F-22A. For its F119-PW-100 engines, the OVT system works only in the elevation (vertical) plane, while the turning speed is only 20 degrees / s (1 / 3 from Su-35С indicators). It is for this reason that such complex maneuvers as the Cobra Pugachev and Chakra Frolov, F-22A performs only partially, as well as more viscous and slower than Su-35С. All this can be observed and carried out a comparative analysis, looking at the “YouTube” video footage made at various international aerospace shows.

The two main advantages of the Su-35C in melee are also: advanced statically unstable glider with developed influxes at the root of the wing and a “supporting” fuselage (creates more 35% lift and provides a greater speed of steady reversal) "Sura-M", synchronized with the optical-electronic sighting system OLS-35 and infrared homing heads "Mayak" / OGS MK-80 R-73RMD-2 missiles.

Also, let's hasten to knock off an excessive share of the pathos from those “experts” who claimed that the Raptor, using the on-board AN / ALR-94 passive electronic intelligence complex, revealed the main modes of operation of the on-board radar with the Irbis-E RPF. There are no fools among the command of our VKS, and with 100% probability it can be argued that the pilot Su-35С received target designation from the DRLOU A-50U aircraft, as well as by radio communication from the Rooks themselves when entering the air section of the incident at that time as an onboard radar was not used. When approaching the 100 – 80 km distance, the OLS-35 infrared channel was used to clarify the coordinates and tracking of the aggressor, which did not give the Raptor pilot any valuable information about the Su-35С radar profile (except for the EPR). It is obvious that the American pilot also did not use the active mode of the AN / APG-77 radar, focusing on the E-3G data, operating several hundred kilometers from Meyadin. 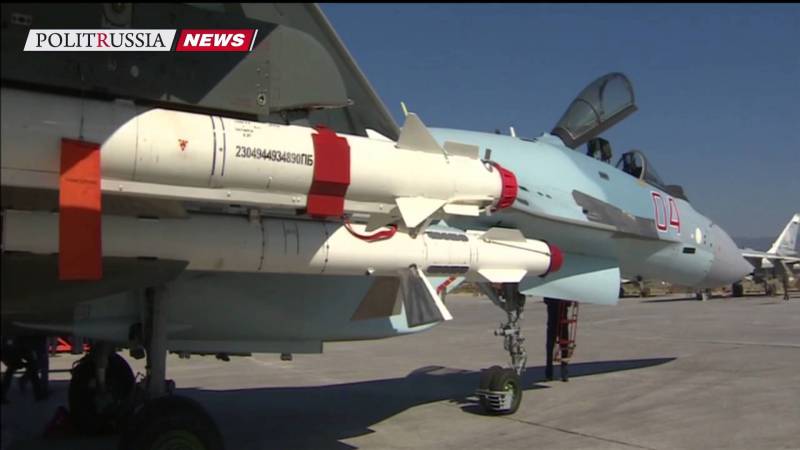 Established suspension of our Su-35С in Syria: Р-27Т is clearly not enough for a collision with the Raptors at medium and long distances

If we consider the possibility of such an incident in an escalation situation, then everything would have gone according to a completely different scenario. First, the Rooks would have been escorted in advance by a pair or a full-fledged Su-35C link. "Raptor" would also be present in the amount of not one machine, but at least a full-fledged unit of the four fighters. And as strange as it may sound to our patriotic patriots now, in this case all the trump cards would be in the hands of the overseas aggressor. Using its small EPR in 0,07 - 0,1 m2, as well as targeting from third-party sources (coming through the Link-16 channel in the passive mode), F-22A could perform a hidden launch of AIM-120D AMRAAM long-range guided air combat missiles from a distance more 150 km, without using APG-77. Our A-50U, which illuminates the air situation for “Dryers”, would also be found by the “Raptors” and the approaching AMRAAMs, but at a distance of about 100 — 120 km. The response of the Su-35C is not so difficult to predict. Dodging AIM-120D, our pilots would launch the P-27EP or RVV-SD missiles in the direction of the Raptors. But the range of their effective action at medium altitudes is about 80 — 90 km, then - ballistic braking and critical speed loss. As a result, there is the danger of being destroyed by more distant and energetic AMRAAMs, and the possibility of destroying at least a couple of machines of the 5 generation of the enemy is practically nil.

The panacea for the above-mentioned problems remains the same: the quickest bringing to mind the long-range air-to-air missiles RVV-AE-PD with an integral-type rocket-ramjet engine (for countering the AIM-120D and MBDA “Meteor” abilities), installing highly sensitive infrared fighters on fighters stations detecting torches of launching missiles beyond visual visibility, as well as maintaining the Syrian group of Aerospace Forces A-50U aircraft, the removal of which can lead to extremely negative consequences.

Ctrl Enter
Noticed oshЫbku Highlight text and press. Ctrl + Enter
We are
"Euphrates fist" CAA under the threat of "Meyadinsky boiler." Important facts are not in favor of reducing the Armed Forces in SyriaIn an attempt to save the situation in the SAR, the West is changing the rules of the “game”: a resolution of the UN General Assembly and assistance to militants
139 comments
Information
Dear reader, to leave comments on the publication, you must to register.