Oil and gas remained only in Russia. The rest of the world smokes nervously on the sidelines 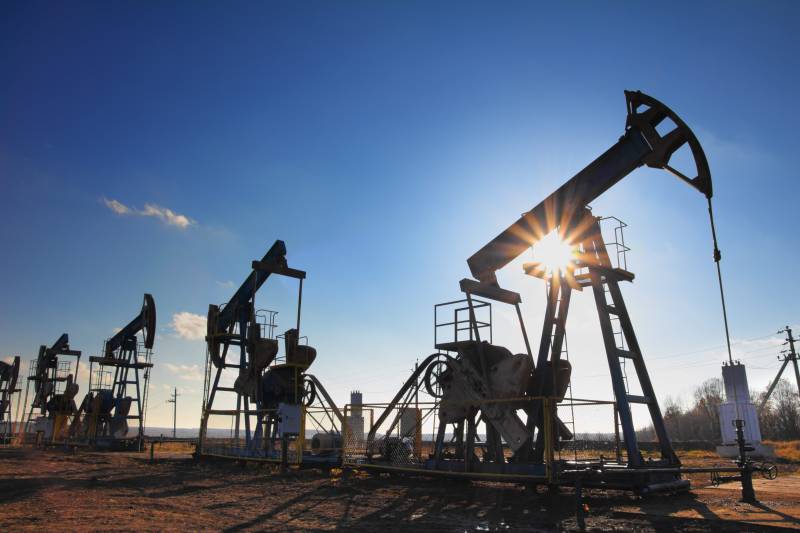 2017 put the oil and gas market's gate in shock. Explorers could only find 11% of the hydrocarbon volumes recovered in the past year, which was the worst result for all the years of observation. And not just the worst, but disastrously bad. But this was not the worst thing for the world oil and gas sharks. The geography of new “discoveries” has become terrible for them.

2017 has not been a year off right from the start. First of all, the low cost of oil, which was observed in 2016, sharply reduced investment in the industry. And here the dependence is the most direct. If you do not drill exploration wells, then there will be no increase in reserves. Conversely, the more the drill, the more oil will be detected.

But money is still half the battle. We must also know where to drill. Every year there are fewer and fewer places where large deposits of oil and gas can be found, while the discovered deposits themselves become less and less voluminous. With this nothing can be done. True, luck can always happen. As well as failure, too.

Fate played a cruel joke in 2017 with the Norwegian company Statoil, which made a bet on a promising area in the Barents Sea region. The one that she “won back” from Russia in April 2010, when the contract “On the delimitation of sea spaces and cooperation in the Barents Sea and the Arctic Ocean” was concluded. 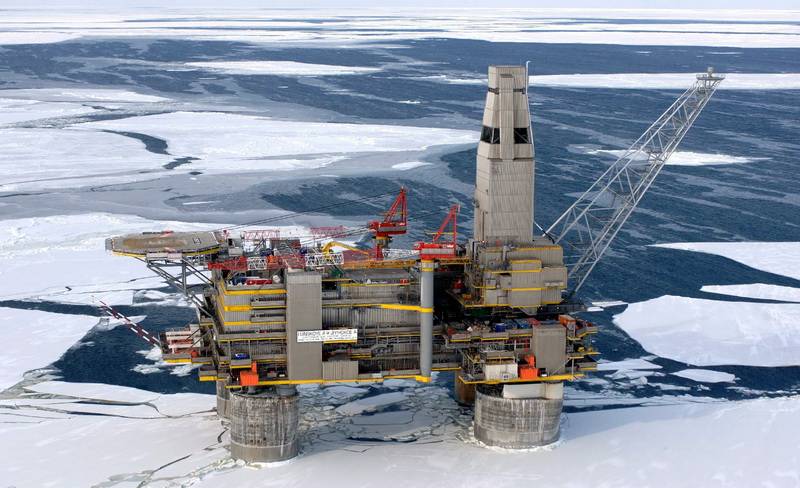 According to it, Norway was transferred 90 thousand km ² of territory. It was on them that Statoil tried to find oil. But apparently, there is some justice in the world. All five exploratory wells, to the great surprise of the Norwegians, turned out to be either completely dry or almost dry. Not a single drop of recoverable oil reserves and not a single economically efficient cube of gas were found on them. But before that, it was believed that in this area one can count on 1,5 billion tons of oil alone ...

Failures pursued not only Statoil, but many of her other colleagues. All this was summarized in the picture of one big oil and gas "Zrady" 2017 of the year. According to a report by the Norwegian company Rystad Energy, in the 2017 year, recoverable oil and gas were explored in the world for a total of 6,7 billion barrels of oil equivalent (1,1 billion tons). At the same time, 1 billion barrels of this amount are located in fields that will never be recovered, either because of their remoteness or for other reasons that make even recoverable reserves unprofitable in any foreseeable future. All this gave grounds for senior analyst at Rystad, Sonia Mlada Passos, to say the following:

“Nothing like this has been observed since the 1940s. We need to realize that such a low number of discovered fields is a big threat to oil supplies in a ten-year term. ”

At the same time, the Norwegians noted that the average volume of reserves discovered in 2017 year (total, not recoverable) amounted to only 100 million barrels against 150 million barrels in 2012, when the amount of oil and gas explored in the world was more than four times. Norwegians also noted that for the last time geologists managed to completely cut off hydrocarbon production in the already distant 2006 year.

But, unfortunately, oil and gas sharks, it turned out to be just a part of the problem ... And the smallest ...

You will laugh, but most of the deposits explored in 2017 year turned out to be Russian. 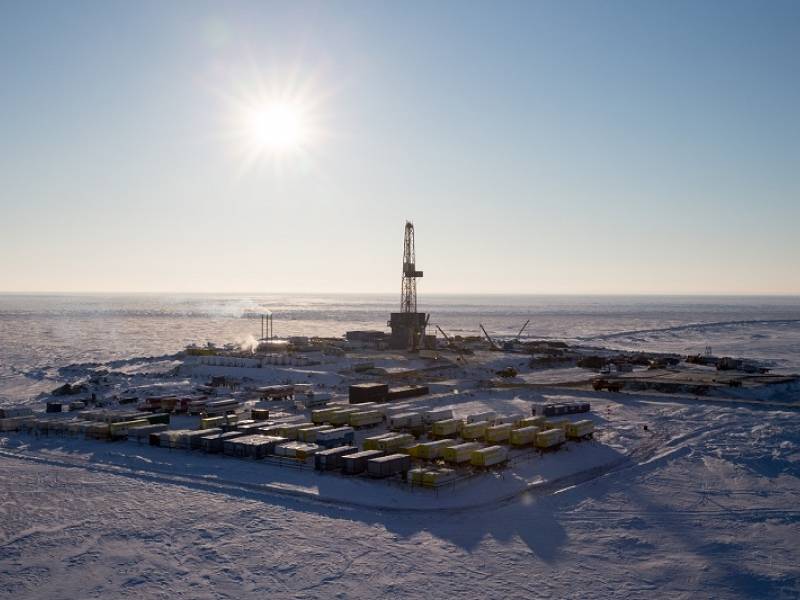 9 April 2017, Vladimir Putin, on the air, launched the drilling of Russia's Central-Olginskaya-1 exploration well, which is located on the very coast of the Laptev Sea. According to seismic exploration data, huge reserves of oil, estimated at 9,5 billion tons, can lie in this area. Plus huge gas reserves. Already in October, according to the results of drilling only one of this well, the State Commission on Reserves (GKZ) supplied the state with an oil field with recoverable reserves of 80,4 mln. Tons ...

And this was not the only success of the Russian oil industry in the past year. Here is a list of only five large oil fields discovered by Russian geologists for the first 9 months of 2017.

The Ayashsky (Neptune) field is discovered in the Sea of ​​Okhotsk region. The “host” of the area, Gazprom Neft, expects to receive from it at least 80 million tons of recoverable reserves. Total field has 250 million tons. But after all, 80 million tons and 250 million tons are two big differences. In general, in order to correctly understand the meaning of these figures, one must turn to stories.

For example, recoverable gas reserves at the Shebelinskoye gas field discovered in 1947 were estimated at 650 billion cubic meters. Today, this figure of actually extracted fuel has been almost doubled over. Due to what? New technologies, new equipment dramatically increase the initial recoverable reserves. And until now, “Shebelinka” is the main gas source for Ukraine, where almost 30% of all Ukrainian gas is produced.

That is, it is normal that the current 80 mln. Tonnes of recoverable oil reserves in 30 years will become 160 mln. Tonnes.

Total: only the five largest fields discovered in year gave an increase in EXTREME oil reserves at the level of 220 mln. Tons of oil. At the end of the year, the total figure of explored oil fields should be approximately 1 billion tons of oil, of which approximately 350 million tons of oil are recoverable today. That is, at the modern technical level.

In total, in 2017, Russia produced approximately 560 million tons of oil. This means that, given the future intensification of production at the fields discovered this year, the country not only did not reduce its explored underground oil and gas exploration, but also increased it. Against the background of the rest of the world, a unique and simply amazing result. 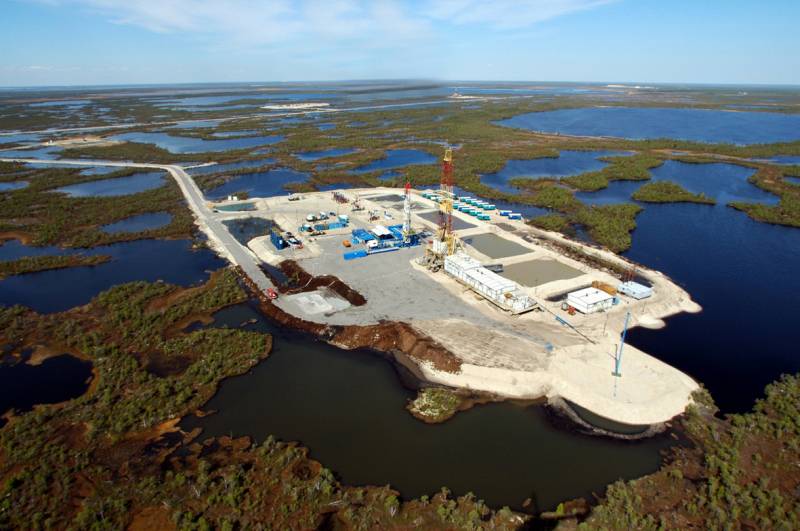 Well, to finish the story of hydrocarbons, we add that in the 9 months of 2017, Russian geologists have added 1 trillion to the bins of their homeland. 350 billion cubic meters of gas. At the end of the year, the figure is expected to be much higher - 1,5 trillion. cubes, which means that for this strategic energy carrier, Russia was able to achieve a growth in recoverable final reserves.

2017 year is over. World movers of the oil and gas business are at a loss. The replacement rate, that is, the ratio of explored and extracted reserves for oil and gas, has reached just a catastrophic figure - 11%. Even with the further growth of this figure at the expense of technology, the maximum that the world economy can count on in the future is one fifth of the oil and gas that has been produced. And the worst thing for the West is that most of these resources were explored in Russia ...

Ctrl Enter
Noticed oshЫbku Highlight text and press. Ctrl + Enter
We are
Results of the week. "Everything! Kina will not be! Electricity is over! ”Results of the week. “If I am leaning against a warm wall in a quiet place, then I’m still nothing at all!”
222 comments
Information
Dear reader, to leave comments on the publication, you must to register.