January 11 2018
91
The meaning of modernity in the liberation from tradition, from collective identity, from social connections and obligations, to the limit - from morality and ethics. This is "freedom from .." as formulated by John Mill - Liberty - the basis of liberalism. Such an exemption from premodern is the essence of modernization. 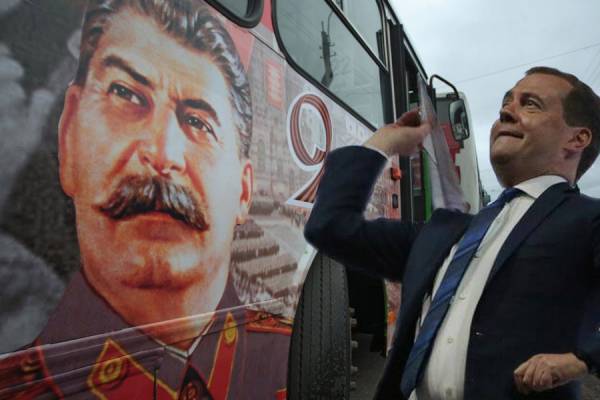 Russia, following the West, went through all the same stages of this “liberation” by implementing all the stages of modernity: the Romanov Desacralization, which gave rise to liberal experiments of the beginning of the 20th century, which led to liberal bourgeois and Marxist revolutions, and again into, now free, unlimited liberalism.

Realizing the perniciousness of the 1990's liberal experiment for Russian statehood itself, the new political elite, which replaced the Yeltsinite liberals, began the process of liberating liberalism from fatally disastrous for Russia, which is contraindicated in any doses. The aspiration is absolutely true, dictated by a sense of self-preservation. But what did we end up with?

But it was precisely the complete emancipation of a person from identity and connections that brought modernity itself to a conceptual dead end. After clearing a person of everything, modern discovered nothing — for it turned out that man was a set of identities, attitudes, values, faith, and social connections. Having cleansed ourselves of the three political theories of modernity, we discovered a state — nothing. How did Western philosophical thought react to the discovered exhaustion of modernity? Creating the postmodern paradigm. How did we respond to the exhaustion of meanings of modernity, as always, out of breath, catching up with the West and in this?

Freed from all the ideologies of modernity, from meanings, from motivations, having discovered “the state is nothing” in the place of Russia, we refused to believe what happened and started, and what was left… the modernization process, i.e. that which has just led us to the present impasse, the process of continuing to tear off the still remaining organic bonds, hammering the same, long ago hammered nail with a frenzy worthy of a better use. Modernization is nothing more than a continuation of a completed modernity, its main mission.

Having announced this, the elites, no matter how strange it may seem to them, did not find a new, general enthusiasm for this, but they found a disappointed state - apathy, indifference, despondency, refusal to cooperate on the part of society. Declarative modernization in the absence of meaning, which, in historical ideology gives optics, it discovered the absence of a goal, which revealed the insignificance of the very statehood, on the assertion of the value of which - which is absolutely true - and Putin came.

So, a disappointed state: there is no goal, there is no hope, the insignificance of the subject is the result of the exhaustion of modernity, which, yes, as in the West, has reached the limit. The insignificance within the subject is nothing — the absence of the subject. Russia, while maintaining the external statist shell, has lost the essence of the state - the subject, in fact, ceased to be a state. It sounds pretty hopeless, so here you can reassure yourself with the thought that things are not much better in the West. Inside - nothing, without - nothing, the subject is neither here nor there. So we meet the postmodern.

Of course, here there is a natural desire to pretend subjectivity, as it is inherent in the current elites, to solve the problem with the help of PR and political technologies. A convulsive simulation of meanings begins, an attempt to grasp at what is rapidly escaping, to reanimate the former subjectivity, to seize upon its residual manifestations. Here appears the image of Stalin, the Soviet cinema and variety art are spinning endlessly, the image of the Great Victory, the reanimation of Soviet virtual reality is being exploited again and again with an attempt to reconcile it with the pre-Soviet era, so that we can draw on images of the former subjectness from there. But all this is the inevitable withdrawal into virtuality and dispersion of the state, which inexorably sucks us into the funnel of the postmodern, but not as a subject of the postmodern, but as nothing.

The worst thing is that ideology in the space of the paradigm of modernity is no longer possible. For it has three political theories of modernity — liberalism, Marxism, and fascism. You can, of course, turn to the Fourth Political Theory, but this is already beyond the bounds of modernity, and for this you need to constructively and constructively comprehend the postmodern. Understand the postmodern. The task, as it seems, is absolutely incompatible for the current elites, which means ... we take the hammer, and continue with a frenzy to hammer a long-hammered nail over the hat. This is all that the current system has to offer. This is her exhaustion. And this is the end of the system. We are alive until the hammer knocks ...

Ctrl Enter
Noticed oshЫbku Highlight text and press. Ctrl + Enter
We are
The world we leave, the world we enter, and the world between themThe West without the USSR: the world goes to an ideological explosion
91 comment
Information
Dear reader, to leave comments on the publication, you must to register.