Notes of the Colorado Cockroach. Hello country gas station from the country-hose! 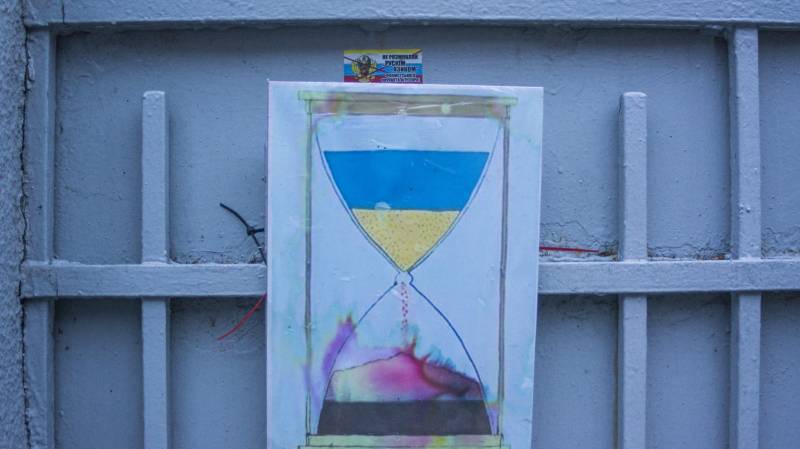 Greetings, my friends! Well, that was the New Year holidays of the new time. Then everything from the retro group. Christmas, Old New Year ... Something that is already incomprehensible even to our children.

Honestly, this New Year has passed with a sense of artificiality. You know how the tree is alive and lifeless. Plastic beautiful and durable. And the usual, from the forest, is alive. Artificial Christmas trees, artificial snow, artificial fun, artificial smiles, New Year's rain ...

All kind of wrong. As in youth, when parting with an unloved girl: "I want everything to be as before. So that I don’t know you at all ..."

Well, how to take the action Moto-Santa Claus 31 December? Motorcyclists went to the airport to meet Santa and ... Snow Maiden! What is it like? Ukrainians, sorry, already grandfather of Santa Claus under the American Santa enclose? Or is it a flaw in decommunizers? Grandfather decommunized, and forgotten granddaughter? But this miracle Yudo also rolled out the kiyan in Kiev and congratulated. The orderlies in a mental hospital got drunk or something before the holiday? Do you forget to close the doors?

And the March of the Nationalists 1 January? What's this? In the center of Ukraine, in the hero-city, in the city where Babi Yar was and is, the fascist shortages march out ... And with the full support of the authorities. I even quarreled with Vyshivanok about this. Though he Svidomo, but sighted. "A narrow circle of limited people ..." Well, yes. And these people wanted to spit on a wide range of unlimited. 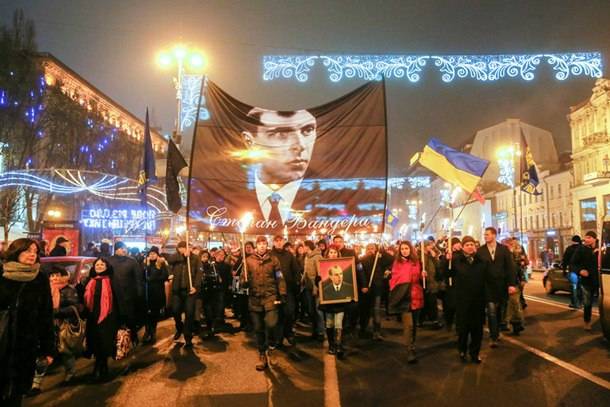 I often read from some commentators a common cliché. Where did you see the fascists in Ukraine? Show! You know, it's like a normal wife to look for. Nothing complicated. I set fire to the hut, broke up the horse and sit and wait. Itself will come. And not one. Choose any. What to look for? Here they are!

Cited a tyagnibok. He proclaimed these slogans in Ivano-Frankivsk. And there were still “Ukraine above all”, “Poland will not be here”, “Our land is our heroes”, “Bandera and Shukhevych are heroes of Ukraine”, “Remember a stranger, here is the owner Ukrainians”, “Remember heroes, destroy enemies”. This Lviv amused.

In my head, one thought turns. And what about our politicians in their circle? Probably, Saakashvili remembered the Ukrainian Georgia, Poroshenko about Moldova, Enanurov, our former prime minister, about Buryatia, Turchinov about Canada, Tymoshenko about Latvia ... How much Ukrainian was taken away from us.

And that we are offended that our state is called Bandera? The state was not what we thought. True, another question now arises. And what did we think? 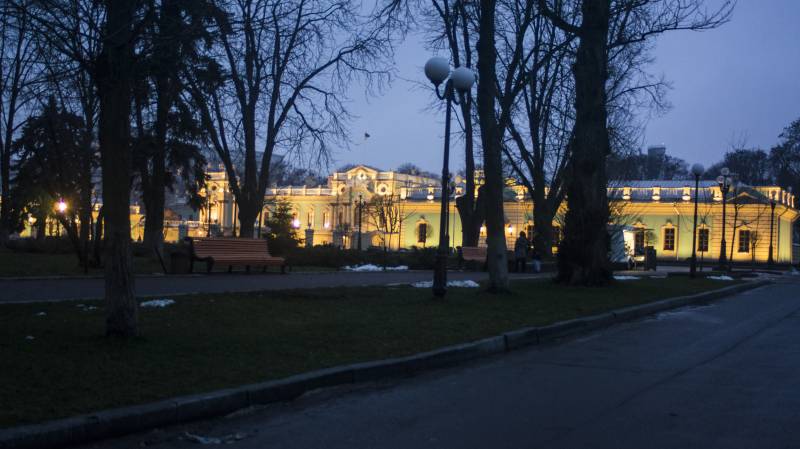 Unreal world and you are concerned. I will now tell about your fear, which any Ukrainian will tell you about, and you probably don’t know about him.

Everything. We found a governing body for all your weapons. And most importantly, we solved the problem of your Crimean bridge! Now Crimeans in large numbers will come running to us asking back. And you know why? We almost got our "Caliber". And this terrible is called weapon "Thunder-xnumx". With a range of 2 km! I figured ruler. To the bridge 280 km! Babakh and there is no bridge. Peremoga!

But I will not be me, if I do not intrigue you before ... If someone read the messages in the press, he noticed that the complex was created by "a number of Ukrainian enterprises". And what kind of enterprise we have on rockets ... was it? Right. "Yuzhmash".

Do you know who tested the rocket engine? Pavlodar Mechanical Plant. These assholes from the SBU even thought that no one would read the inscriptions on the backs of the workers who were preparing the tests. PMZ as a receiver Yuzhmash. Do you know what PMZ is famous for? Production "Mriya"! Not an airplane of course. Food processor! Mokritsa them ... 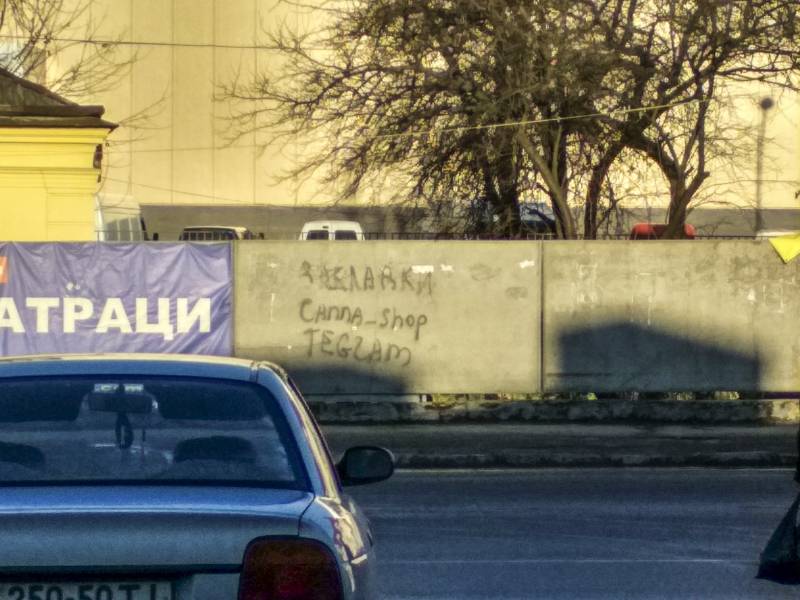 Everything. I will not be more about the virtual world. Only about the real. And just a little bit. The virtual world differs from the real one in about the same way as a sauna does from a sauna. In the bath, we send those who we do not like. And we invite those who, on the contrary, like to the sauna ...

Finally, we were banned from driving through the cities in cars. Everything. Now the speed is limited to 50 km / h. But I immediately had two thoughts about this. The first is that you still can’t overclock on Ukrainian roads. And the second - with the imminent transition to the massive use of oxen, it will even be too much.

In general, funny. The “old traffic cops” took their speed measuring devices more than a year ago. New devices were not issued at all. By eye, we now measure speed. And the devices will not change the situation. 50 allowed plus 10 instrument error. Same 60 km per hour.

And we have raised the minimum salary! On 523 hryvnia! And you thought that we were bending down from hunger and cold (damn new year and after new year rain, already got everyone). And now we get the minimum 3 723. At the official exchange rate, the hryvnia costs two rubles. And the euro is worth almost 34 hryvnia ... 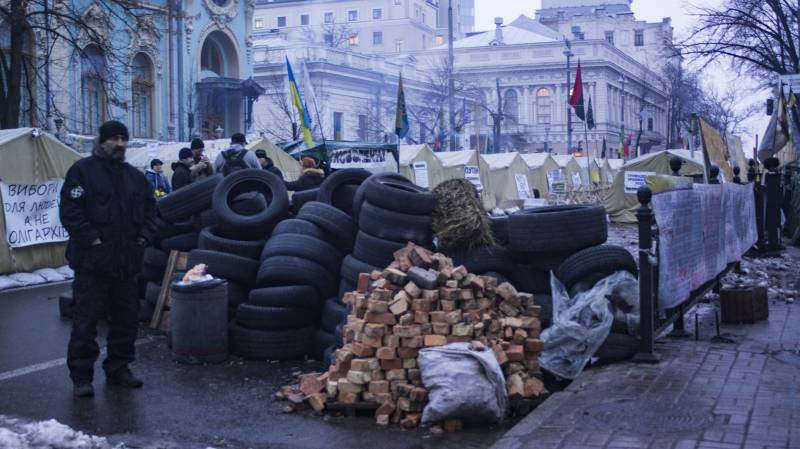 The main thing is that the salary was raised on time. Especially for smokers. Our cigarettes went up by 30%. And they will continue to go up. Up to European prices. I was not lazy and looked at what kind of a beast such - European prices. Inform. 90 euro for 1000 cigarettes. This is the minimum excise tax. We now have 20 euros for 1000 cigarettes. In short, Ukrainians are switching to an environmentally friendly self-garden.

But do not forget our bosses and other non-smokers. Prices at the pump went berserk. And they became riotous. They grow daily like a sponge from a good housewife in the kitchen. I now suspect that it is you who throws up another muck to us. How else to explain the fact that excise taxes raise you, and fuel prices are rising for us? Or is it somehow connected with the beginning of the duty-free importation of electric vehicles into Ukraine? 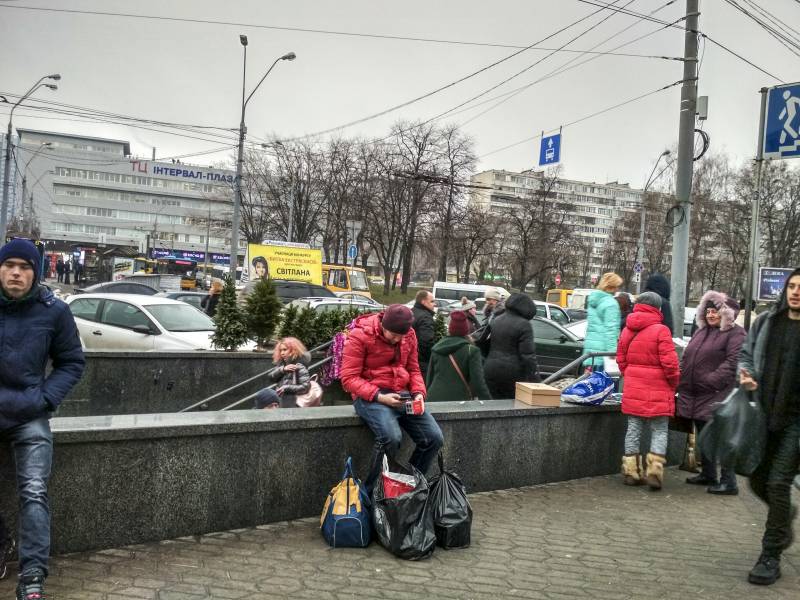 Even the oldies are not forgotten by our economists. Do not drink, do not smoke, do not have cars. They thought no one knew their "weak" place. Old people do not know how to use mobile phones! And tryndyat sit on a landline phone with neighbors. And we give them a price increase for Ukrtelecom services! Now home unlimited in the city is 74 hryvnia, in the village of 70. Well, what, the right decision. Dear young. They landline phones use little.

So, now news from the front of a hybrid war. What do you think? We continue to fight. The first blow, we delivered to your singer Eugene Kemerovsky! Imagine, this naive person decided to go to the Crimea through Ukraine. Like, I am a law-abiding person, I have been living in the civilized world for a long time, I execute the laws of Ukraine. Let me go to the Crimea, I have a house there.

We do not let enemies! Kemerovo, this emigrant, though, is Russian. Probably. So - the aggressor. So I got it in full. Sneaking it means to the administrative border with the Crimea and once: "Do you have permission to go to the Crimea?". Checkmate! Come back! Mon ... so to speak. 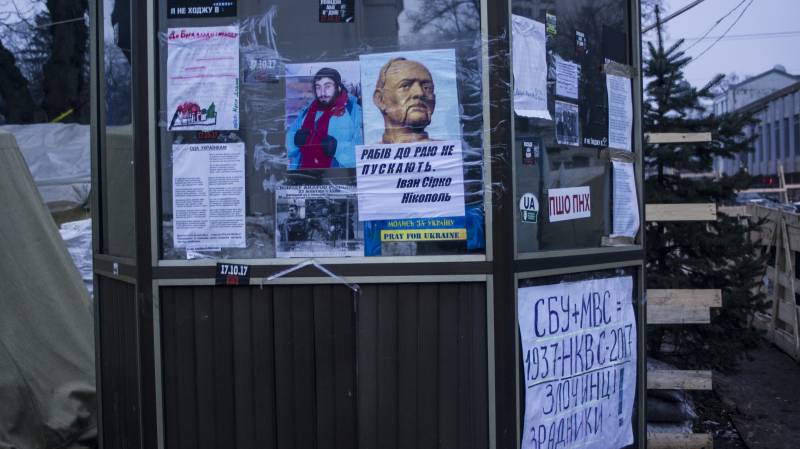 True, I, as usual, thought itching chitin. If the border is administrative, then why the border guards? What is this, if I get to a ride to Odessa, do I need permission? Where do these assholes get their posts? What does Ukraine look like in the eyes of normal people after such actions?

And finally, I can not kick your Gazprom. Let Miller, with a headache, suffer from our peremoga. Ukraine in 2017 increased its transit through its gas transport system to the highest level since 2011 of the year! Five times SUX and ten jumps to all! Almost a record!

What boasts your Gazprom? What record? And you say that we do not develop. Once in my youth Tarakanushka told me beautifully about the words. I mean, you always have to say something beautiful when you do something ... indecent. "Took the chest - say something."

Here we do something like this. We have a record increase in transit! I wonder how can a hose set a record? How much is poured into it, how much is pumped through it. This is theoretically. And practically? We say, and you do. We set a record, and you? Hmm, country-hose ... Somehow even more offensive than the country-gas station ...

I think we will set a record next year. On the last journey. In memory of our GTS. Set the evil on everyone. So you bit your elbows. 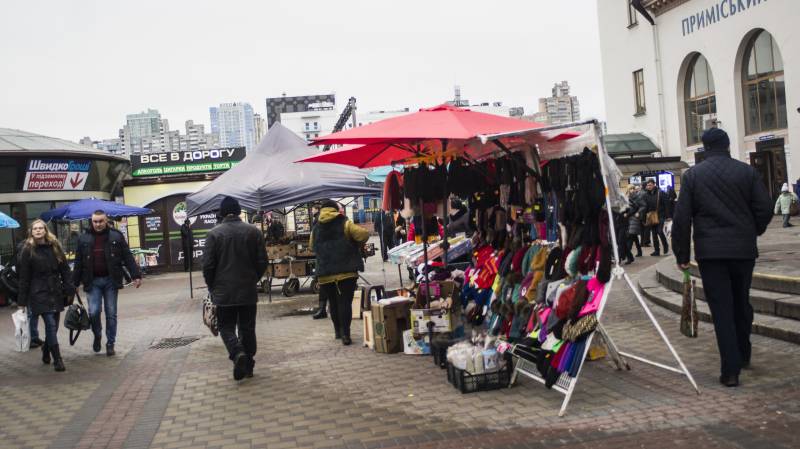 And now the most important thing. For most Russians, the most important holiday of Orthodox Christians is Christmas. For us, this is also a major holiday. Whatever our rulers say. I know that in Russia everything is mixed into some kind of Russian religion.

For the first time, Santa Claus came to Islamic Chechnya and, they say, a very beautiful holiday was there. The children squealed with delight, and Kadyrov called himself the Deputy Santa Claus on the New Year holidays. I think that at the Christmas table you will also not particularly understand who is who, in the sense of faith.

Therefore, congratulations to all the Orthodox Merry Christmas! I wish you all the very, very! Health, love of loved ones and relatives, success in all endeavors and ideas. And may God be with you always. God, Allah, Buddha, Yahweh, Cosmos, Providence ... Sorry if I did not name something. God is one. The names are different. 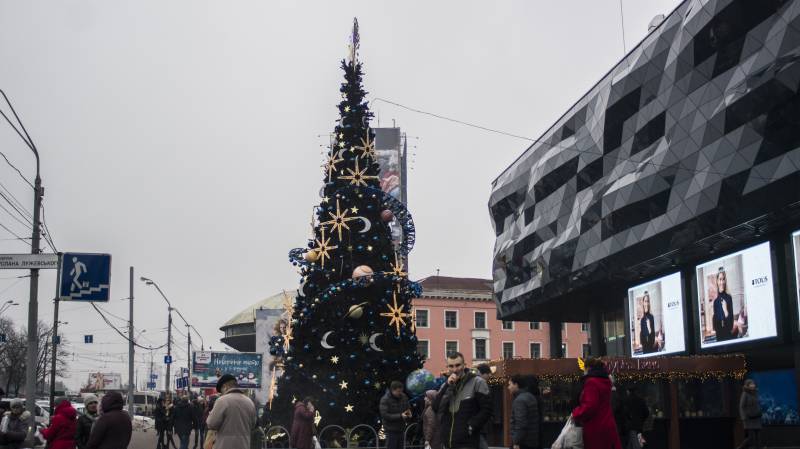 I am sure that all of you have worked as clerks. And your tables were full as it should be.
I also worked, yes, although I met Holy-Evening with my kin in the village, rather far from Kiev. Why - find out soon. 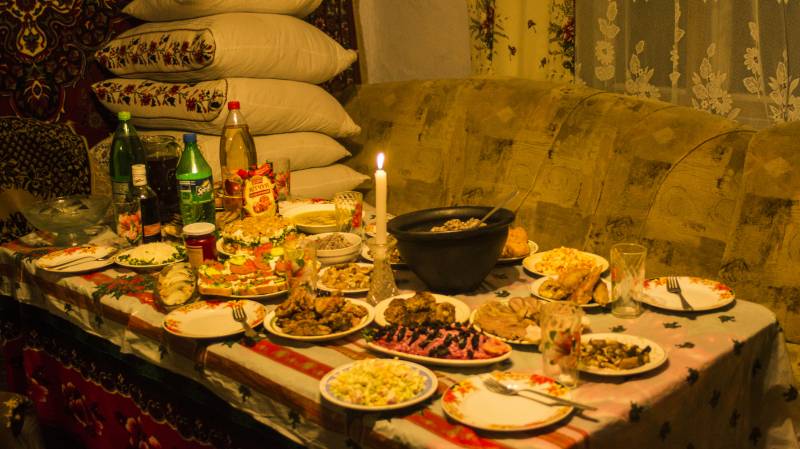 But here it happened to me - in the village, with environmentally friendly and tasty vegetables and poultry. Well, you know, in the "Sprite" is not a sprite naturally, but in the "Tarragon" - not the tarragon. And our delicious, nutritious, healthy, clean, medicinal brew. He is a vodka.

And to you my dears, I wish you a good life with all my heart. Well, we will meet on our apocalyptic paths, paths in the coming year.

The main thing is to be with whom, for what reason.