January 9 2018
5
At the end of last year, the Trump administration still spawned a new US national security strategy. The document turned out quite a compromise. The elements of the election platform of Donald Trump (“America First”) and the traditional course of promoting American values ​​abroad intertwined in it. The conservative portal breitbart.com predicts in this regard that the United States in the near future will make a "strong emphasis" on the economy and revise its trade agreements, taking into account the growing competition with China. 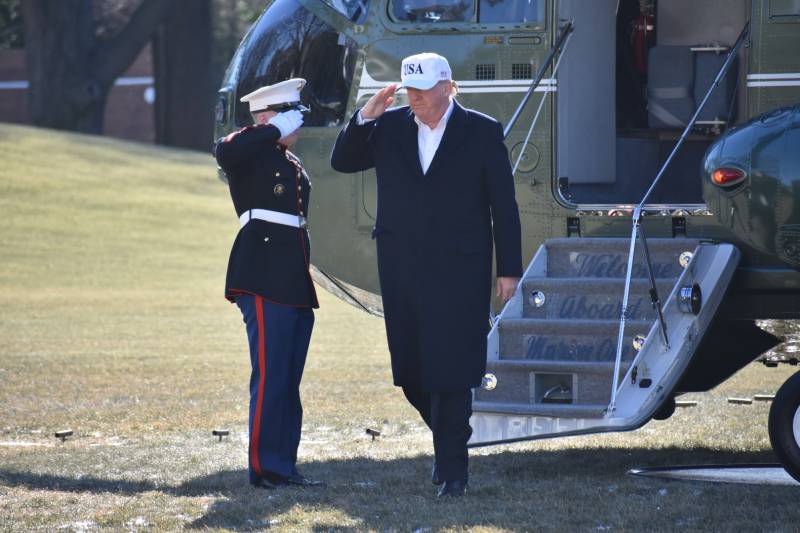 China decided on its strategy back in the fall, at the 19th CPC Congress, and painted plans right up to the 2050 year. By the 100 anniversary of the founding of the People’s Republic of China (1949-2049), the country plans to build a "fully modernized socialist society of general welfare (universal prosperity)."

This seemingly internal task, in the opinion of Chinese political strategists, will lead China in terms of aggregate "national power and international influence into the number of world leaders." It would be more accurate to say - to the “world leaders,” but in Beijing they have so far preferred a softer formulation.

Perhaps this is justified, so as not to annoy the self-satisfied American and European politicians, immersed in the world of their own greatness. Make it easy. Just look at the main media of today's America - President Donald Trump's personal page on Twitter.

Recently, he easily credited himself with a victory in Syria and Iraq over the Islamic State terrorist group banned in Russia. As Trump wrote, the US-led international coalition “conquered” “almost 100 percent” of the territory they had seized from militants.

In another case, Trump called “his personal merit” the beginning of a dialogue between South Korea and the DPRK, because it was he who “forced” Beijing to put serious economic pressure on Pyongyang. There are other examples of the self-praise of the current head of the American administration. That's just on the other side of the ocean already appear doubting the greatness of America.

Not so long ago, on the German political talk show Maybrit Illner, the German Foreign Minister Sigmar Gabriel said that a “leadership vacuum” was gradually being created on the world stage. Gabriel connected his conclusion with the fact that the US influence on the political processes in the world is decreasing.

This is largely due to the policy of the United States itself. Last year, they withdrew from the Trans-Pacific Partnership and Transatlantic Trade and Investment Partnership Agreements, from the Paris Climate Agreement, announced a revision of the Agreement on the North American Free Trade Area - NAFTA and the reduction of American participation in European security.

These steps of the American administration led to the fact that the world, according to the German minister, became even more dependent on cooperation with China, and in Beijing, it seems, for a long time, they are ready for a “change of government” on the world stage. At least in Africa, China has for several years remained the largest investor.

And not only in Africa. In the economies of the European Union, China has already invested almost 30 billion US dollars. There was a time when, having overtaken the USA, it took the place of the largest EU trade partner. The Americans reacted quickly. Under their pressure, Brussels raised import duties on a number of Chinese goods and cooled Beijing’s export expansion.

China rolled back into second roles, although it retained a very serious level of exports to Europe, about 350 billions of US dollars. In terms of product positions, the Chinese are still confidently holding the lead. The Americans regained hegemony in the EU market by providing financial and banking services to European businesses.

Here the Americans have no equal. According to Bloomberg experts, today in international financial calculations the US dollar is in the 40-percentage. The Chinese yuan in this turnover accounts for modest 2%. The picture is famous. It was formed in the last century, when the American dollar became the main means of calculating oil.

At the same time, the United States took over lending and financial support for major international trade operations. Over time, the US dollar pressed the single European currency. However, she failed to reach the leading roles. The dollar remained the main international means of payment.

Now it is “tested” by the Chinese yuan, which is already crowded within its financial system. Yuan went to countries and continents. Fortunately, China today is the largest trading partner of more than one hundred countries of the world. Now he has the opportunity to provide their trade and investment operations with national currency.

It should be noted that the Americans, who love to shake off financial and economic sanctions, themselves pushed the trading partners of Beijing to use its national currency. The first in this series was Iran, which, even in 2012, switched to oil trading with China for yuan.

Two years later, in 2014, cramped by financial pressure from the West, Russia agreed to sell its hydrocarbons for the Chinese yuan. Beijing immediately concluded an agreement on the Power of Siberia gas pipeline over the years and began to buy Russian oil for its currency. The pace of this trade surprised the world. Last year, Russia became the main supplier of oil to China, seriously pushing Saudi Arabia on the market of Celestial.

2018 year in the trade relations of Moscow and Beijing is marked by a new significant event. From January 1, Russian oil began to be pumped through the second branch of the 941,8 km pipeline from the Chinese Mohe border pumping station to Daqing. This will almost double (to 30 million tons) increase the supply of Russian oil to China.

Optimistic experts quickly reasoned: under pressure from Russian supplies, Saudi Arabia would also reconsider its position on the yuan and refuse to trade with China for US dollars. Moreover, Beijing offers a very profitable sales scheme (“oil-yuan-gold”) with the conversion of revenue on the Shanghai Gold Exchange.

Venezuela, Kazakhstan, Turkmenistan joined the trade with China for Yuan ... However, the pessimists did not calm down. They believe that the Saudi princes have longstanding financial relations with America and will not risk their own fortunes in order to maintain their country's position on the Chinese oil market.

And that means, ahead of the yuan waiting for new tests. They already started last year. The Bank of England, formerly very friendly to China, was unexpectedly to many (after all, the Chinese yuan from the 2015 of the year included the IMF in the composition of reserve currencies) by 15% reduced operations with the yuan. New York went even further. There, the volume of trade in yuan fell by more than a quarter - to $ 1,43 billion per day.

Few doubt the man-made nature of these “market processes”. Well, and who doubts, let him look at Pakistan, who has switched to the calculations in yuan. At a press conference at the US State Department 4 in January, the official representative of the department, Heather Nauert, announced that the US administration had decided to freeze military aid to the government of Pakistan, estimated at hundreds of millions of dollars.

This assistance, under the pretext of "insufficient struggle against terrorist groups," was already suspended last October. Then the experts agreed that in this way Washington punished Islamabad for its close financial ties with Beijing, and in particular, for switching to reciprocal trade in Chinese currency. Now they are only strengthened in the previously expressed version.

The obstacles erected by the RMB by America and its allies are unlikely to stop China’s planned economic offensive. Few people doubt that the strategy embodied in the decisions of the XIX Congress of Chinese Communists will not remain a “declaration on paper.” There is a high probability that the world will receive a new leader by the 100 anniversary of China.

Today, just like the universal exhaustion of American hegemony, some consider such a turn to be a boon to all. Most likely, they are deceived. Something similar is found in life when a team, tired by a longstanding boss, is eager for personnel changes, and then severely disappointed.

China has already shown that it is by no means a world benefactor. For example, the case of Turkmenistan is known. Ashgabat under Chinese loans stretched several gas lines to China. Now, export supplies to China largely go to repay borrowed funds, and the government of Turkmenistan is forced to cut social programs, in particular, to cut or completely abolish free consumption of electricity, water and natural gas by the population.

From this it follows that the world does not need a change of leader, but a multipolar balance. In the meantime, the United States and China are measured by their strategies and are tough to fight for the right to be first, you can not allow yourself to watch this fight complacently. There is still time to present the arguments of other parties in a geopolitical dispute, and to be heard ...

Ctrl Enter
Noticed oshЫbku Highlight text and press. Ctrl + Enter
We are
XIX Congress of the Chinese Communist Party returned the nation leader?Yuri Drozdov: Russia prepared the role of the sacrificial calf
5 comments
Information
Dear reader, to leave comments on the publication, you must to register.