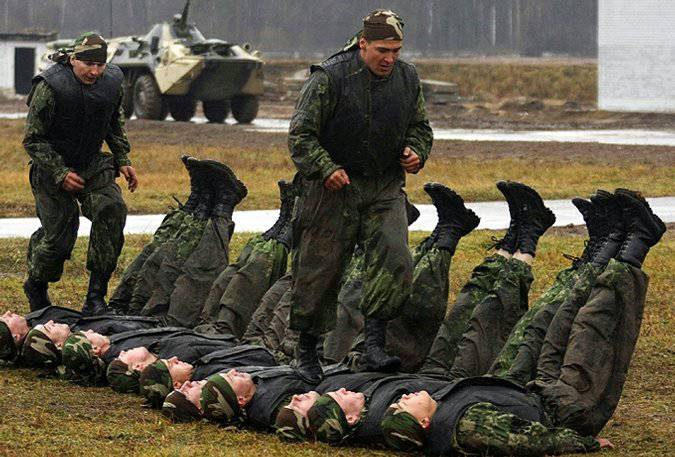 Hazing, born at the end of the 60 of the twentieth century, became almost synonymous with the late Soviet and then Russian army. It was caused almost simultaneously by the following: a) the actual destruction of the institute of junior commanders (sergeants and petty officers); b) the recruitment into the army of people with a criminal record, which began in pursuit of the number of personnel. The first led to the destruction of the natural vertical of power among the rank and file, and the second provided a methodology for the informal vertical.

For four decades, bullying has been institutionalized. And it was she who became the main (and perhaps the only) reason why our armed forces turned into a nationwide scarecrow. In this regard, it should be noted that hazing does not have foreign analogues, since the institute of junior commanders was not eliminated in any serious armed forces. The Soviet experiment was one of a kind, unjustified and inexplicable absurdity. Non-statutory relations exist in almost any army, but our scale and systemic precedents do not have.

However, the military reform of Serdyukov changed the situation drastically.

First, in the transition to a one-year service life, dedovshchina in its previous form became impossible in principle - in a year it is simply impossible to pass the previous path from the “spirit” to the “grandfather”. Secondly, control by the commanders and bodies of the military prosecutor’s office has noticeably tightened. Thirdly, the situation was affected by the permission of conscripts to have mobile phones and the right to regular visits by their parents. Fourthly, in the last two or three years there has been a noticeable intensification of combat training, which in itself automatically leads to a decrease in non-statutory relations. Fifth, the illegal use of a rank and file at work unrelated to the service (such as the construction of general dachas) has been discontinued, which also reduces various non-statutory manifestations. Regularly appearing on the Internet and some print media that "nothing has changed in the army" is a direct lie.

At the same time, of course, the idyll is still far away. Although hazing in its classical Soviet form disappeared from the barracks, the non-statutory relations remained in it. Firstly, through fellow countrymen (almost exclusively Caucasian, especially Dagestan). Secondly, through contract servicemen, among whom, as one would expect, the percentage of lumpen is very high (there could be no other way, “well-trained professionals” are a typical liberal myth). Thirdly, through the most powerful recruits acting on the principles of "social Darwinism".

All these problems have been preserved because the fundamental issue - the re-establishment of the institute of junior commanders - has not yet been resolved. Although the need for its immediate solution was repeatedly announced at all levels, up to the minister and the president. Alas, all the current military reform is proceeding by trial and error, without any thoughtful concept. This also applies to the issue of junior commanders.

Unfortunately, most of the current sergeants are extremely poorly motivated, do not have the necessary leadership qualities, have low psychological stability and educational level. The reorientation of the Ryazan Airborne School to the training of sergeants does not solve the problem, since it will provide less than 1% of the Armed Forces need for them, and the duration of training (three years) is too long. For example, in the United States, where the training of junior commanders is given an exceptionally high importance (sergeants are officially called the “backbone of the army”), the initial training of a sergeant lasts only four weeks. And only then, as he moves up the career ladder, he undergoes additional training.

It is very difficult to change the situation, but it is necessary. It is clear that junior commanders should be only contract servicemen (we still have a part of sergeants recruited from draftees), while at the posts of sergeants and senior officers a strict selection is necessary (no less tough than officers). . Of course, junior commanders should have substantial benefits and a monetary allowance at least twice as high as the average salary in the country (otherwise one should not count on their high quality).

“The army is commanded by me and the sergeants,” said Marshal Zhukov. Russia has its own traditions in terms of forming a corps of junior commanders. There is also extensive world experience. It is necessary to carefully study them and implement them in the new conditions. Since the question is already very matured.