January 9 2018
7
The international coalition and its armed forces in Syria are conducting an aggressive information campaign against Russia. On the eve of the group "Jaish Magavir at-Tura" ("New Syrian Army") has spread a message about the rejection by the Russian side of the offer of Western states to conduct a joint sweep of the desert areas of Syria from the ISIL militants. 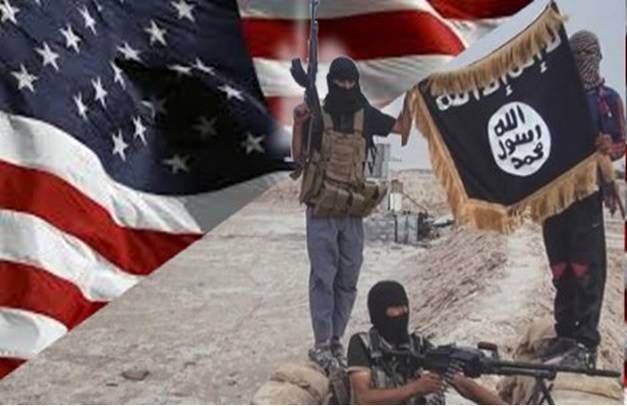 On the Hammurabi_News page on Twitter, a document has been published, stating that sources of threats to the Islamic State have been discovered by the efforts of the coalition and New Syrian Army in the Badia desert. 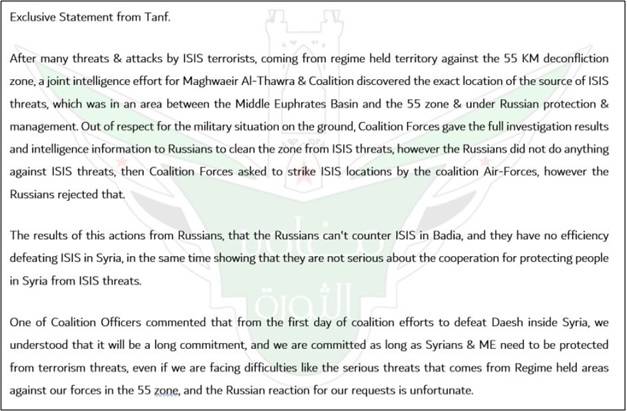 In accordance with the information provided, the surviving ISIL militants are concentrated between the Euphrates and the US military base near the settlement of Tanf. The text contains the commentary of the officer of the international coalition (the name and rank of the soldier is not indicated - Approx. Ed.), Where it is reported that the United States and allies intend to be present in Syria until the local population needs it.

Given the lack of a signature of the official in the document, as well as statements on the matter from the Russian Defense Ministry and the military-political leadership of the coalition countries, we can assume that the “opposition” of Syria is “fake” newswhose goals are quite obvious.

The military presence of the coalition led by the United States is carried out under the pretext of fighting the terrorist group ISIL. Thus, statements about the foci of the pseudo-caliphate remaining in Syria can be viewed on the one hand as an attempt to justify the deployment of American bases, the supply of weapons and the Pentagon’s training of armed groups in the Arab Republic, on the other hand, to discredit the successful actions of government forces and allies who defeated the banned Islamic State organization at the end of last year.

Special attention should be paid to the attempts of the Western media and foreign politicians to convince the public that all initiatives to establish cooperation with Moscow are stopped by the Russian participant. At the same time, the real interests of the parties offering Russia to jointly fight Islamic radicals are being masked.

The status of the “New Syrian Army” and its mentors as parties involved in stabilizing the situation in Syria continues to raise serious doubts. We will remind, earlier the chief of the General Staff of the Russian Armed Forces Valery Gerasimov reported on the training of militants "Jaish Magavir at-Tour" at US military bases near the settlements of Et-Tanf (south of the province of Homs) and Ash-Shaddadi (southeast of the province of Haseka). According to the military leader, there are at least 1000 Islamic State terrorists in the territory of American military facilities exported from their Raqqi and southeastern regions of Deir ez-Zor province. In addition, over the past month, Arab and Iranian news agencies have repeatedly reported evacuation aviation US field commanders of ISIS in northeast Syria.

Summarizing, the formation of the “New Syrian Army” can be compared with the “rebranding” of the radical group “Islamic State”. In this regard, the "fake" messages about the presence in the desert areas of Syria of the remnants of radical ISIL units and the need for their speedy stripping are a game for the public, played in the past by the igilovtsy and now - the "oppositionists" from the "New Syrian Army".

Ctrl Enter
Noticed oshЫbku Highlight text and press. Ctrl + Enter
We are
A great interview with Sergey Lavrov: about Ukraine, Obama and IranWhat you didn't want to know about England
7 comments
Information
Dear reader, to leave comments on the publication, you must to register.