For tanks came up with a thermal "stealth hat"

January 5 2018
117
Russian Tanks will receive a thermal "invisibility cap". It effectively protects combat vehicles from heat-guided munitions. The “cap” is mounted on the engine-transmission compartment and distorts the infrared signature of military vehicles. At the same time, it can be easily made by conventional repair units of a motorized rifle regiment. The novelty was developed by military engineers from the Moscow Higher Combined Arms Command School (MosVOKU). Experts called the emergence of a new defense very timely: thermal-guided submunitions were widespread in foreign armies, Izvestia reports. 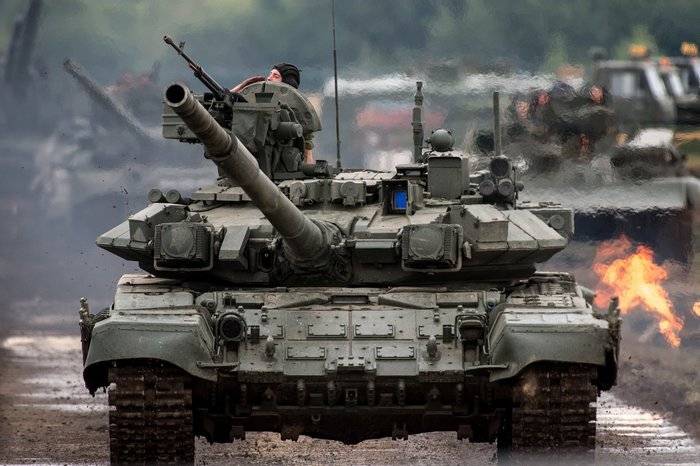 As told in Mosvok, the sample of the device created by the specialists of the school has already been tested. It is designed to protect armored vehicles from high-precision self-aiming submunitions. The work was carried out on the own initiative of the developers.

A special device with insulating plates is mounted on the combat vehicle. As a result, the pattern of the heat sink changes, and the shock core hits a false target located behind the geometric contour of a real machine.
- explained Alexander Kotrovsky, Associate Professor of the Department of Operation and Repair of Arms and Military Equipment of MosVOKU

The design offered by the developers from Mosvok is quite simple. This is a removable box made of heat-insulating materials on asbestos or ceramic base. Holes are made in the box under specially calculated angles that dissipate heat from the engine.

The manufacture of the device does not require significant costs - due to the simplicity of the design. Its serial production is possible by regular repair battalions.
- Alexander Kotrovsky specified.

According to Sergey Suvorov, an expert in the field of armored weapons and equipment, the protection of armored vehicles from self-targeting combat elements is a very urgent scientific and technical challenge.