"Thunder-2" mixed with "Dongfans". Where do the legs of the Ukrainian OTBR grow and is it too early if we laugh? 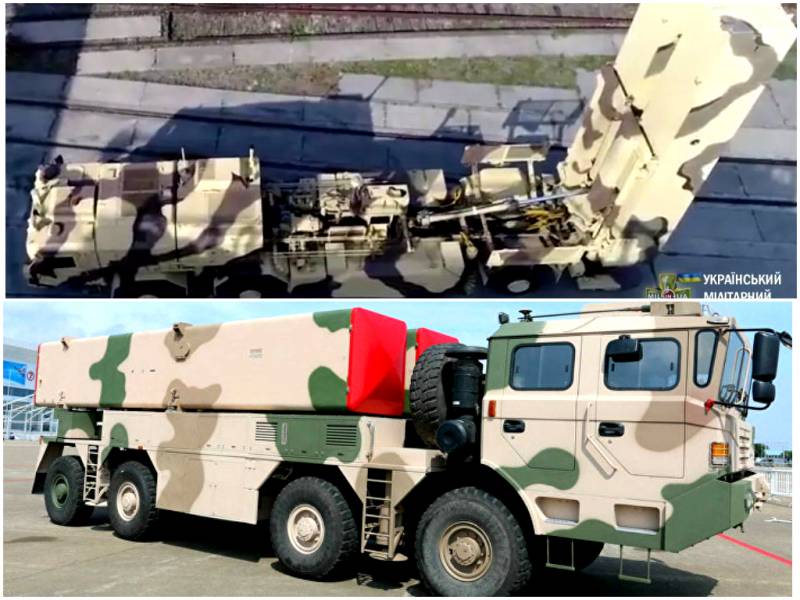 In early December 2017, the general director of the Ukrainian state-owned enterprise NPO Pavlograd Chemical Plant Leonid Shiman made a rather unexpected and contradictory statement about entering the Thunder-2 operational tactical missile system into the final phase, which even then created a real “dump” in Runet »From the comments left by both opponents and supporters of the criminal Kiev regime. The first ones traditionally (in the standard marasmic form) defended the swift adoption of the “Thunder” into service with the Ukrainian formations with the possibility of “shelling of the Central Russia from the positions in the Sumy region”. The latter, as standard, without particularly thinking about the details of what is happening, began to make fun of the project, emphasizing the lack of experience, capabilities and financial resources of the Yuzhnoye Design Bureau enterprises and NPO Pavlograd Chemical Plant enterprises under their control. An even bigger commotion in the network began after placing video demonstration bench tests of prototypes of accelerating stages with solid-propellant rocket engines, one of which ended with an explosion and the demolition of the demonstrator at the final stage of burning a solid fuel charge due to an unforeseen pressure jump above the allowable limit.

During the period from the publication of the project’s existence (2013 year) to the beginning of bench tests (the end of 2017 year), the program has acquired many useless myths that often distract us from the threats that may arise after the first OTRK has acquired operational combat readiness. What do we know about this project? It can be said for sure that it is a conceptual analogue of the early draft of the operational and tactical missile complex Borysfen, which was created within the walls of the Dnepropetrovsk Yuzhnoye Design Bureau in 1994, and after a few years had to replace the outdated Elbrus 9К72 complexes. "And 9K79-1" Point-U ". It was planned to equip the prospective operational-tactical ballistic missile Borysfen (OTB) with a guidance system with a new element base.

It was supposed to include not just a more advanced command-gyro device with a fiber-optic or ring laser gyroscopes, but a gyroscopic inertial measurement module + a more advanced optical-electronic correlation unit-GOS with a possible option in the form of a GPS navigation module that would provide rocket KVO about 15 - 20 m. According to the plan of specialists of Yuzhnoye Design Bureau, the Borisfen rocket in speed of the march flight was significantly ahead of the Elbrus OTBR and the OTBR 8М14 -9 komplesa "Tochka-U" to improve the capacity to overcome the enemy's missile defense. It is obvious that the Ukrainians made an alignment on the high-speed operational-tactical ballistic missile 79М1 of the Oka complex, the detachable warhead of which turned into 9 - 714 - a degree dive at a speed of about 80 km / h on the approach section of the trajectory. This was also confirmed by plans to give Borisfen a range of 90 km. Nevertheless, against the backdrop of the difficult economic situation of the middle - the end of 10500-s, the project, to our happiness, remained at the level of sketches. Otherwise, at the beginning of the escalation of the Donbass in 500, when the militia did not have the proper air defense systems and was not familiar with the operation of these weapons at all, in the hands of Kiev would be completely "tested" at the landfills tactical missile system capable of more long distances to hit the peaceful cities of LDNR and advanced units of the Armed Forces of Novorossia.

However, the Ukrainian militarized formations and without a new complex for more than three years have created intolerable living conditions for the peaceful Russian population of the Lugansk and Donetsk people's republics using barreled and rocket artillery, as well as the Tochka-U OTRK. Fortunately, a certain amount of Tor-M1 and other air defense systems capable of intercepting “Points”, moving at speeds from 600 to 800 m / s, appeared on the NM LDNR units. However, this does not completely eliminate the problems of the possible adoption of the "Thunder-2". In 2009, the draft of the finalized OTRK Borysfen reappeared in the list of promising defense programs “Square”, but already under the name Sapsan. The product was supposed to be equipped with a promising guidance system based on miniature solid-state MEMS-semiconductor gyroscopes (possibly in staff ADXRS150 (300), as well as accelerometer ADXL330, as was done on the first Iskands. ” during 4 years (until 2013), while the then Minister of Defense, the regional Pavel Lebedev, did not announce the closure of an ambitious project, which the Yuzhnoye Design Bureau and the Southern Machine-Building Plant were working on. At the same time, problems with The financing of Sapsan started back in 2010 year.

As for the “Thunder-2”, the information about the start of development appeared on 1 September 2016 of the year on the Ukrainian resource depo.ua with reference to “Design Bureau“ Yuzhnoye ”and“ Pavlograd Chemical Plant ”. Moreover, it became known that the enterprise developers secured financial support for the Persian regional superpower - Saudi Arabia (the acceleration of the design pace is due to the interest of Riyadh against the background of failed contracts for the purchase of Russian “Iskander-M” and American “ATACMS”) This radically changes the situation. The Saudis who invested more than 40 million into the project will surely check that the new product will become operationally ready as soon as possible. And the opinion of some commentators and “experts” is very erroneous that with 64-year experience in designing various types of medium-range ballistic missiles, ICBMs and launch vehicles, the former OKB-586 (now Yuzhnoye Design Bureau) will stretch the design of the “Thunder-2” for a whole decade; Do not forget that the project is supervised by Riyadh. Now about another interesting detail regarding the origin of the complex "Thunder-2".

We all know that the Ministry of Defense and aviation Saudi Arabia has an approximately 30 year old history cooperation with Chinese research institutes and state aerospace companies. So, back in 88, the Royal Saudi Strategic Missile Forces, in secret from the US, purchased from the Celestial Empire more than 50 medium-range ballistic missiles DF-3A in peak of the Israeli lobby in the US Congress, because of which Washington refused to allow Riyadh to acquire E-3A Sentry long-range radar detection and control aircraft. Later, in the middle of 2000, a scandal broke out about the acquisition by Saudi Arabia of even more advanced MRFM DF-21 with the permission of the White House, which was partially described in the book “Patriot Lost” by American analyst and naval engineer Jonathan Scherk. At the present stage, this cooperation is expressed in the purchase of 300 advanced long-range attack and reconnaissance UAVs “Pterodactyl-II” (“Wing Loong-II”) worth about 10 billion dollars. In other words, Riyadh may well acquire from Beijing also documentation on other types of weapons, besides those that possess unique constructive and radio-electronic elements using critical technologies.

Now let's turn our gaze to the 5-based mobile all-terrain launcher developed by KrAZ or the Design Bureau for them. Morozova (GP KMBM). At its base, we see a rather bulky paired launcher with heavy transport-launch containers ~ 8,5-9 m long and about 1,2-1,5 m wide. Also, on the provided video, it can be approximately calculated that the diameter of the Thunder-2 OTBR building in the area the starting engine ranges from 0,85 to 1 m. We can see almost identical (by design) paired PU in the Chinese tactical complex M20 (the version for the PLA - DF-12), with the only difference that in the Chinese complex 4- host chassis. What is even more remarkable, the mass of the Thunder-2 warheads, indicated by the Ukrainian developer, fully coincides with the weight of the Chinese M20 combat equipment (kg 480). The only loophole traced here is where the ideas of the Thunder-2 design, in which the documentation on the OTBR M20 (DF-12) acted, were taken into the hands of the Independent Square, and the representatives of the special services and the Ministry of Defense of Saudi Arabia acted as the main link in this action. It is also possible that Beijing transferred the Yuzhnoye Design Office to the DF-12 production technology in exchange for the provision of any Soviet critical technology that did not fall into the hands of Chinese specialists. There can be a lot of tangles here, but one thing is clear: for the speedy adoption of the “Thunder-2”, huge efforts are being made, and this is a very bad sign!

Judging by the dimensions, the operational-tactical ballistic missile of the “Thunder-2” complex can get a range from 350 to 600 km, which makes it possible to deliver powerful blows to the Luhansk and Donetsk people's republics from the central regions of the Square. And as an effective protection, neither the Torah-M1 nor the Pantsiri-С1 will pass here, since the speed of the flight of the Thunder-2 in the final part of the trajectory will be from 7 to 9M (like in Oki), therefore for protection will require anti-missile systems such as C-300PM1, C-300B4 or Buk-M3, which will need to be transferred to the Donbass urgently. Today, the thoughtless ridicule of the next Ukrainian project should be thrown aside and it is good to think about countermeasures if this product is brought to mind with Arabian and Chinese help, because the Chinese people of Donbass and the differences between Moscow and Kiev are absolutely indifferent.

Ctrl Enter
Noticed oshЫbku Highlight text and press. Ctrl + Enter
We are
Ukraine announced the creation of a new rocket complexAn-12 in Afghanistan
89 comments
Information
Dear reader, to leave comments on the publication, you must to register.