January 6 2018
46
German Chancellor Angela Merkel, in her New Year's address, urged compatriots and all Europeans to "work harder than ever to preserve the unity of the community." A year earlier, the Bundeskanzlerin wished the Germans to remain optimistic. This wish was the result of a severe crisis with migrants and the expected elections to the Bundestag. Now, despite the other crisis - the government, Merkel is setting the Germans to work together with the whole of Europe. 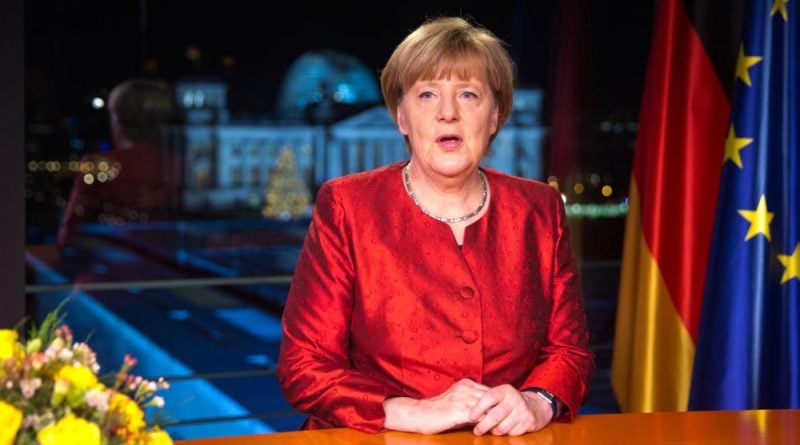 Dreams of the United States of Europe

This time the commentators of the German social networks did not deny themselves the pleasure of harshly criticizing their multi-year chancellor. She remembered all the crises of recent years, splitting German society. On the Facebook page of the Chancellor, actress Silvana Heißenberg published a post with hundreds of likes: "You are the most despised and criminal federal chancellor that the German people have ever had to endure."

Local mass media explain this sharpness of assessments by the recently increased centrifugal sentiments of the Germans, in other words, by the growing number of European skeptics and nationalists. In the recent elections to the Bundestag, they voted for the right-wing parties. The party “Alternative for Germany” became the main beneficiary of the increased nationalistic sentiments of the Germans, taking third place in the voting.

The mood of these people was expressed by another visitor of Merkel's Facebook page - Patrick Brandl. “Isn't it paradoxical,” writes Brandl, whose post has almost 500 likes, “when the German chancellor booed his native German people and praised all sorts of Syrians, Romanians and company. What does this mean? Obviously, the chancellor rules the wrong country. ”

At first glance, the German politician takes a diametrically opposite position in relation to the critics of Merkel. He has consistently advocated further European integration. December 8, the leader of the second most important in the country - the Social Democratic Party of Germany, Martin Schulz, even proposed to create the United States of Europe by 2025.

“I propose a European constitutional treaty that forms a federal Europe,” said Democrat Schultz and added. “The treaty will be submitted to EU member states for ratification, and those who refuse it will automatically have to leave the bloc.” Such is the almost forced integration of Schulz.

Many in Germany approached it with approval. This was recorded by the British company YouGov. She is hot on the heels of Martin Schulz's speeches conducted a survey of the attitude of Europeans to the new concept of the German politician. According to a study, about a third of Germans agreed with the federalization of Europe.

Close to them in the mood of the French. In France, the idea of ​​Schultz liked 28% of respondents YouGov. The rest of the Europeans were more restrained, if not skeptical. In Sweden, Finland, Denmark, Norway and the UK, only 10-12% of survey participants supported the creation of USE.

The Schulz project abruptly rejected most Finns (56%) and Norwegians (55%). The mood of these people can be understood from the commentary given by the director of the Institute of Regional Problems Dmitry Zhuravlev to the RT correspondent. According to the expert, there is a danger that a deeper unification of Europe will turn it into one big Germany.

“Schultz wants everyone to agree with the new Constitution,” noted Zhuravlev. - What will it mean? A single Constitution is, ultimately, a single government elected throughout Europe. But we understand that the industrial superiority of Germany, the superiority of the German economy, business will largely determine who and how they will be elected. ”

Meanwhile, the German establishment as a whole reacted with approval to the proposal by Schulz. Therefore, in the New Year's greeting of Angela Merkel, he saw the focus on European integration, which would strengthen German positions. The circle is closed. Critics Merkel and her supporters, speaking from different political positions, expressed essentially the present mood of the Germans - to focus not on European, but on their national interests.

From whom does Germany draw its strength?

For Europe, it is not news. It is no accident that Czech President Milos Zeman saw in the Schulz proposal a threat to unity in the EU and stressed: “No one has inflicted more damage on the idea of ​​European federalization than Martin Schulz has done with his own statement”. Zeman was referring to Schultz’s thesis on the automatic expulsion from the USE of EU members who disagreed with the “European Constitutional Treaty”.

The Czech President is a long-time opponent of German politicians. He is represented by the leaders of Poland, Hungary, Greece and even the Baltic countries, who are dissatisfied with the plans to build the Baltic gas pipeline. Periodically, this circle of critics of German policy in the EU expands. The reason for this is undisguised pressure from Berlin on community decision making.

If Germany used to make profitable decisions for her “through quiet consultations”, now she does it with the help of loud statements and active work of the German media. A vivid example of this is the “coercion” of EU members to quotas on migrants, who, hoping to increase the labor potential of their own country, were invited to Europe by Angela Merkel herself.

This dominant position of Germany is naturally explained by the power of its economy. The Germans really got a lot from the expansion of the European market. They advanced their business across the continent with a noticeable profit. After all, the German economy on 30% - export. Moreover, it is not only a matter of exporting from the country products of world-famous engineering or electrical companies. Their share is not so large in the German economy. Services dominating here account for up to two thirds of GDP. They - the main subject of German exports to the countries of the European Union.

This, of course, is not about repairing shoes or repairing apartments. Services in the German economy are based on three pillars - the state’s banking and financial system, trade and transport. Deutsche Bank, Dresdner Bank and Commerzbank, including commercial and mortgage banks, investment, insurance and leasing companies, specialized consulting firms, etc., are at the center of this composition.

All this joy has collapsed on European heads, powerfully promoting German business in the EU, including medium and small ones. Do not forget about the banks and their national partners in the "services". Suffice it to recall the trading company Metro AG from Düsseldorf, with the help of German capital, generously scattered its super-and supermarkets in all European countries.

Over time, the German business began to control investment projects, the market for finance and services in many EU countries, and even to influence personnel policy in local companies. The bottom line is the trade surplus in favor of Germany. In 2016, it accounted for more than € 75 billion in EU countries (exports for € 707,9 billion against imports for € € 632,5 billion).

What does this arithmetic show? First of all, the fact that German business systematically depletes the economies of its EU neighbors. The German balance 2016 of the year is larger, for example, than the GDP of Bulgaria and Latvia for the same period. It turns out that during the year Germany is actually “swallowing” two small countries of the commonwealth. Last year, German appetites only increased. According to preliminary estimates, the trade surplus between Germany and the EU increased by 5 percentage points.

Such a situation does not contribute to strengthening unity in the European Union. New plans of German politicians only add fuel to the fire of discord. After all, these plans today can be viewed as an attempt by the Germans to consolidate their hegemony in the EU, to give it a new structural character with the help of a supranational government of federal Europe.

For the sake of this goal, indeed, it is necessary to “work more actively than ever,” as Angela Merkel called for in her New Year's address. Will the Europeans agree with this appeal of the current leader of Germany? We will know the answer already in the coming year ...

Ctrl Enter
Noticed oshЫbku Highlight text and press. Ctrl + Enter
We are
Merkel set a new record of political uncertainty in GermanyPreventing a revaluation of values: Angela Merkel rushes into battle with Donald Trump
46 comments
Information
Dear reader, to leave comments on the publication, you must to register.