Riots in Iran provoked to start another war

January 4 2018
124
I remember the old, still of Soviet times anecdote, which went among the officers of the special services. When, at a meeting of Soviet and American intelligence in a bar in a neutral country, they began to brag about the successes of their own departments. And it turned out that Soviet intelligence still beat the American one. And then the American recalled Chile. "Do you remember how we are in Chile?" "In Chile? And when was that?" "In September, 1973-go" ... "Aah. So at that time we were on potatoes." 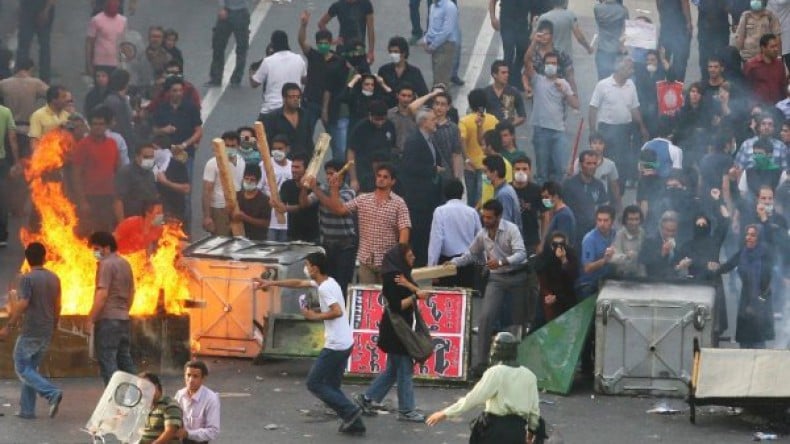 Approximately the same situation is observed today. We, rejoicing in the New Year holidays and wishes, do not look around at all. The world seemed frozen in our eyes. The holiday is the same.

And the world lives. And, no matter how insulting it is to us, the activity is manifested in those places where we have some foreign policy successes. In particular in Iran.

It is no secret that today the political situation in the country hard rocking not only the local radicals, but already trite Western leaders and intelligence agencies subordinate to them. One should not even mention the one who is at the head of the whole gang of "fighters for the rights of people of their own choice." Anyone who is at least somehow familiar with the situation, it is clear that at the head of the "fighters", as always, the United States.

"The people of Iran are finally acting against the cruel and corrupt Iranian regime. All the money that President Obama so stupidly gave them went to the terrorists and into their pockets. And the people have little food, high inflation and lack of human rights. The United States is watching!" .

The words of President Trump are especially cynical after the fact that less than a year ago the people of Iran in the democratic elections, by the way recognized as such in the United States, elected Rouhani as president.

As one would expect, European politicians have already come out in support of the position of the American president. Like the UK premiere. I think that others will not give up the opportunity to once again "lick the great democracy" in one place. Alas, there are not so many states in the world today that can pursue an independent foreign policy.

Today it is necessary to consider the situation as a whole. Who and why destabilizes the region today. Sadly, the list of states that at least something can decide in the region is not so great. Israel, Iran, Saudi Arabia, partly Turkey. Plus, Russia and the United States on the Rights of the main winners of terrorism.

Iraq after Iran’s increasing influence is internally torn. The Sunnis of the north-western territories are already openly talking about the possibility of a religious war in this country. This position, of course, supports Saudi Arabia. This country is the Sunni center of the region.

Sunnis cannot openly oppose Tehran for a number of reasons. But the "bite" on trifles are capable. It is clear that a year or two ago even to imagine such a situation was impossible. However, today we see that some of the young princes, in particular, the crown prince of Saudi Arabia, Mohammed bin Salman, speak directly about the need to overthrow the regime in Iran. Moreover, there are occasional accusations of Persian aggression.

And now it's time to look at the position of another player. Player, the fate and life of which depends largely on regional security. It’s a paradox, but Israeli Prime Minister Benjamin Netanyahu, who is famous for his negative attitude towards Iran, is silent. Moreover, he even called on Israeli politicians to refrain from commenting on the situation in Tehran.

I do not know what it is. Political wisdom or foresight. But the fact that Netanyuhu understands perfectly well that the regime in Tehran will stand and turn the neck of all these protesters is obvious. As well as the fact that Iran can support the desire of some politicians and the military in Syria to return the Golan Heights in the event of a hostile position of Israel. Some analysts generally speak about the possibility of a sudden strike against Iran. Iran can become a big war detonator.

Israelis are always forced to take into account the possibility of war. But if earlier, before the Syrian events, the situation was more or less predictable, today it is not favorable enough for Tel Aviv. It's not even the armies of Syria and Iran. The point is to change the overall situation in the region. Who can predict the actions of Turkey and Russia in the event of a war? Will the US get involved openly in a war? How will NATO behave? Unanswered questions ...

However, Israel still has politicians who agree to risk their own security and even the security of their country for the sake of regime change in Tehran. Despite the recommendations of the Prime Minister, the Minister of Regional Cooperation, Tsakhi Hanegbi, said that the unrest in the neighboring country was organized by those who "bravely risk their lives in pursuit of freedom."

As you can see, the new year not only did not ease the tension in the region, but, conversely, increased the danger of the beginning of a military conflict. Those who finance and support the unrest in Tehran do not really want peace. And they consider war as the only way to preserve their own influence on regional states. Divide and rule. The ancient, but still working principle of politicians.

Supporters of war are often called hawks in the media. My attitude towards such politicians as a fingerboard is becoming more and more enhanced. Or hyenas and jackals. Let the eagles fight. Let the wolves fight. Let the lions fight. And the fruits of this fight will be enjoyed by hyenas, jackals and vultures. World run by scavengers ...

Ctrl Enter
Noticed oshЫbku Highlight text and press. Ctrl + Enter
We are
The tragedy of the American army ("The Atlantic", USA)Results of the week. "God forbid to see Russian revolt, senseless and merciless!"
124 comments
Information
Dear reader, to leave comments on the publication, you must to register.