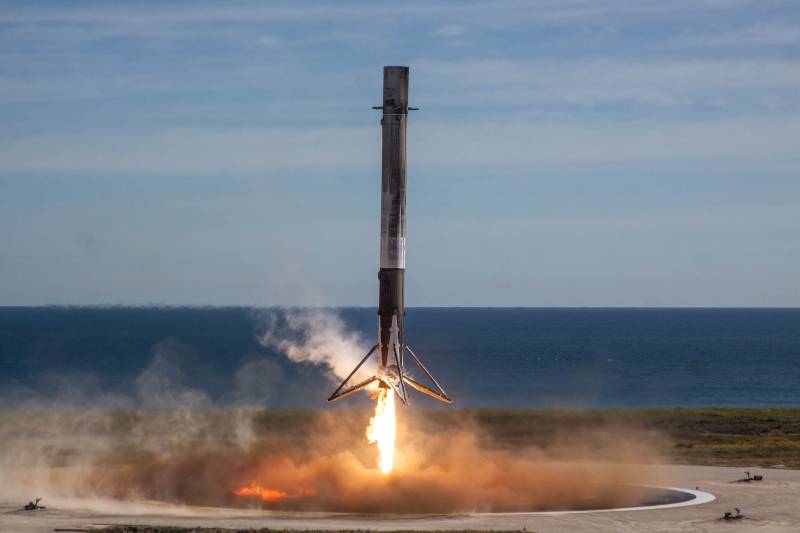 Landing the first stage of the Falcon 9 launch vehicle onto the landing platform, December 2017 year.

According to the general designer, this is a fully reusable, single-stage launch vehicle for vertical takeoff and landing of the Korona. The project to create it was frozen in 2012 year, and now resumed.

He noted that today in the USA, the technology of soft landing of the first stage of the Falcon launch vehicle and its reuse has already been developed.

Our development, the Corona launch vehicle, unlike the American one, does not have detachable stages and is in fact a soft take-off and landing spacecraft, which opens the way for long-distance interplanetary flights with crews on board
Degtyar said.

SRC is one of the largest research and design centers in Russia for the development of rocket and space technology. From 1992 to 2012, the company conducted work on Crown, in particular, identified key technical and technological solutions. Then the project froze due to lack of funding.

Recall that at the first stage of the Falcon 9 launch vehicle of the American company SpaceX, equipment was installed for its return and vertical landing on a landing pad or a floating platform. In the future, the stage can be used to restart.

In addition, in December, the American company Blue Origin tested the reusable New Shepard 3 system. The launch and landing of the missile of the same name and the upgraded capsule were considered successful.
Ctrl Enter
Noticed oshЫbku Highlight text and press. Ctrl + Enter
We are
Project Falcon 9. Successful landing of the first stage and market prospects
323 comments
Information
Dear reader, to leave comments on the publication, you must to register.