The trick of a new breakthrough in Turkey: the US expects a "shake" Ankara Shifts Base South 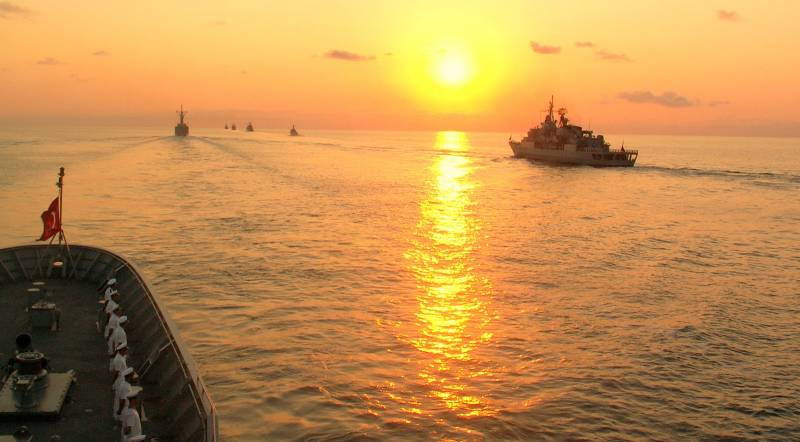 More than two years have passed since the tragic incident in the airspace over the northern part of the province of Latakia, where the Turkish F-16C in the passive mode of the radar made vile interception from the rear hemisphere of our Su-24M front-line bomber returning from a combat mission to destroy ISIL strongholds. During this seemingly short period of time in the Russian-Turkish relations, two sharp military-political turns happened at once, starting with a diplomatic squabble and an exchange of "sanctions strikes" and eventually ended in dialogue and a full "reset" of bilateral relations. Unfortunately, due to the need to correct the Middle Eastern situation in our favor with the same coin, the Russian WKS did not repay the Turks, but this period was more than enough for Ankara to radically change its position on issues relating to the support of hostile forces in the Syrian theater of operations (“Dzhebhat Al-Nusra "and ISIS, banned in the Russian Federation), and also realized that the process of full containment of the pro-American Kurdish YPJ / YPG detachments can only be supported through diplomatic and operational-strategic opportunities. Tyam Moscow.

A radical change in the priorities of Erdogan and his entourage towards Syria had a rather positive effect on the operation of the Aerospace Forces of Russia, the Syrian Arab Army, Tiger Forces and Hezbollah to destroy the most powerful IG enclaves in the Euphrates, while the strategy Washington on the use of assault "bones" of ISIS as a tool for combining the 55-kilometer "security zone" with the territory controlled by the SDF ended in complete failure. Thus, Ankara has achieved several serious successes at once, including the opening of an “export corridor” for the future supply of the Triumph C-400 long-range anti-aircraft missile systems, as well as the operational establishment of fire control over the northern territories of Syrian Kurdistan. However, the Turkish leaders decided not to limit themselves to the above bonuses. Last week of 2017 of the year was noted interesting newswhich, once and for all, erased the stereotype of military experts that Ankara is capable of acting solely on local operational directions, which mainly apply to the states with which Turkey has common borders.

In particular, according to the information for December 29 provided by the Military Parity publication with reference to the international television company Al Jazeera, an agreement was reached between Ankara and Khartoum on the construction of a powerful port infrastructure in the Sudan’s “coral pearl” - the city of Suakin. It is logical that this facility in the next 3-5 years will turn into the largest foreign naval base of the Turkish fleet, which will have strategic importance equivalent to the future Russian naval base in Port Sudan and the Chinese base in Djibouti. But for what reason did the country, having only a minor dispute with Greece regarding maritime borders in the Aegean Sea and a sluggish conflict with Kurdish detachments near the northern borders of Iraq and Syria, sharply raise the question of establishing control over the Red Sea? There are several answers here.

Firstly, this is a large-scale expansion of the presence of the Turkish armed forces in the Near-Asian region, which will give Ankara a lot of operational and strategic advantages in the event of an escalation of major conflicts within the Eastern Mediterranean. For example, an attempt to resolve the “Kurdish problem” in the northern part of the Syrian Arab Republic may result in an extremely unpleasant response from Washington for Turkey, expressed not only in the supply of American-made small-scale and anti-tank weapons to the “Syrian Democratic Forces” (SDF) in direct military support of the YPG / YPJ through massive rocket attacks on pro-Turkish forces operating against the Kurds in the province of Aleppo. It is worth noting that today all the prerequisites of a possible conflict between Ankara and Washington on the basis of the “Kurdish issue” have appeared. The last incident occurred on January 1 2018, when fighters of the Anti-Traitor FSA battalion of the pro-Turkish Syrian Free Army captured a Kurdish YPG soldier in the Sayad town center.

At the moment, in the province of Hasek, under the strict guidance of American military instructors, a new anti-government radical wing is being formed called the New Syrian Army, consisting of ISIS and Jebhat al-Nusra militants, who were promptly taken out of the boilers to the north- western part of the SAR and the province of Deir ez-Zor. The activities of this group will be aimed at creating an unstable operational situation on the contact line between the Kurdish and pro-government territories along the Euphrates and south of Manbij, as well as a possible attempt to break through the tactical “corridor” along the Al-Bouaz-Al-Kharab line to unite with the western SDF enclave. It is here that the most large-scale clashes between the SDF and the forces supported by Ankara can occur, where the US Navy is quite capable of using a deck Aviation and RGM-109E, operating from the eastern Mediterranean.

In this case, the naval infrastructure in the Sudanese Soakina will be an excellent basis for the formation of the A2 / AD restricted access zone and maneuver capable of establishing a full-fledged "barrier" from the US Navy strike force groups entering the Mediterranean from the Arabian Sea through the Suez Canal . Of course, no progress in fulfilling the contract with Lockheed Martin on 100 F-35A fighters is any longer necessary, but the decision to acquire Russian C-400 anti-aircraft missile systems Triumph clearly demonstrated the lack of dependence of Ankara on Western European and American defense industry The recent recognition by the Trump administration of Jerusalem as the new capital of Israel added fuel to the fire. This thoughtless step led to a completely unexpected outcome in the Middle East agenda. In the opinion of the inadmissibility of supporting the appropriation of Palestinian territory, even states with different interpretations of Islam, in particular, Iran and Turkey with the predominant Shiite and Sunni populations, respectively, united.

The second reason for the construction of the naval infrastructure in the Sudanese Soakina is undoubtedly the urgent need of the Turkish Navy in the presence of a transshipment point and a logistics center halfway between the Turkish coast and the Persian Gulf. For what? The fact is that Ankara should tightly control the situation around the conflict of Qatar with the main participants of the “Arabian coalition”, which tended to the maximum in June of 2017. Diplomatic civil strife broke out between Doha, Riyadh, Abu Dhabi, Cairo, and then some other “players” of the Arabian coalition after Qatar’s accusations from the CA and the UAE sponsoring ISIL, as well as other terrorist groups operating in Front and Central Asia. Then a quite adequate question may arise: where is Turkey and where is Qatar; What is a geostrategic link between these states, and why does Ankara have stability in this area?

The key point here is that Qatar is currently considered by Turkey as the main reserve supplier of liquefied natural gas in case LNG imports from the United States and the Russian Federation become impossible (after all, support of the FSA group hostile to the Syrian government and the fight against the SDF may eventually lead Ankara to a new diplomatic conflict). It is for this simple reason that the Turkish leadership is monitoring the situation in the Persian Gulf with special care. Recall that 17 December 2015 of the year, immediately after the start of exacerbation of Russian-Turkish relations, a major “gas deal” was concluded between Turkey and Qatar, providing for regular deliveries of liquefied natural gas to Turkey in the total volume of 1200 million cubic meters. m, as reported by the Qatari ambassador Salim Myubarek. According to Anadolu, LNG imports will be made on a long-term basis. This is the whole secret of Turkey’s concerns regarding the military-political situation in the Persian Gulf and Qatar in particular.

To ensure control over the situation, starting from June 2017 of the year, the command of the Turkish Armed Forces sent to Qatar several operational groups of the Turkish military contingent with attached armored vehicles, various weapons and other equipment: by September the number of Turkish personnel increased to 111 people, and the next December 26 the group was deployed on the territory of the El-Udeid airbase, which is one of the front Asian airfields for strategic bombers B-52H and B-1B and location of the electronic reconnaissance aircraft RC-135V / W and ground target designation E-8C "JSTARS". Ankara very carefully summed up the transfer of troops to the coast of the Persian Gulf under the Turkish-Qatari defense agreement of 2014, which provides for the construction of Turkish military infrastructure at the request of the leadership of the emirate, as well as large-scale joint military exercises to increase the defense capabilities of both countries. What is even more remarkable is that any Pentagon military action in Anterior Asia in front of Asia (from supporting the Kurds in advancing through the province of Aleppo to a quite likely strategic aerospace offensive against Iran) allows the Turkish army to easily block the operation of El Udeid airbase, what will be the hardest hit on American interests in the region. Such a scenario is quite possible to consider, and already in the near future.

The extremely tough position of Turkey in relation to the destructive activities of the Pentagon in the region is manifested in almost any convenient situation. So, for example, in the statement of the Foreign Ministry of Turkey regarding anti-government protests in the Islamic Republic of Iran, which began on December 28 of December 2017, one may meet the interesting wish of the earliest "settlement of the situation and avoidance of external interference in the protests." A hint was made of direct involvement in the bloodshed and the so-called "social protests" of the American, Israeli, and possibly Arabian special services. It is quite natural that in this military-political situation, the military base in the Red Sea is needed by Turkey, literally as air and water, while the Russian naval base in Port Sudan and the Chinese in Djibouti will completely reduce the efficiency of the American fleet to zero, especially, given the agreement on the use of Egyptian airfields by Russian tactical aircraft.

Quite an important detail can be considered the fact that Khartoum does not appear in the list of “Arabian coalition” countries that broke off diplomatic relations with Doha in the summer of 2017, which means only one thing - the build-up of the Turkish group in the most scandalous emirate of the Persian Gulf will move steadily and in accordance with the plan, and on the distant approaches to the Strait of Hormuz, Turkish transport and combat surface ships, supported by the advanced naval base Suakin, will increasingly meet. Consequently, the overseas “holder” of the El-Udeid airbase will have to seriously restrain their hegemonic appetites, and Turkey’s geopolitical status will be a step closer to the level of a regional superpower.

Ctrl Enter
Noticed oshЫbku Highlight text and press. Ctrl + Enter
We are
New challenges to the strategy of the Russian Aerospace Forces in Syria are “outlined” and require a “game” of advance. What “mechanism” of NATO does Turkey coax in the north of Syria and Iraq?The new concept of the Russian Aerospace Force of the Russian Federation will include a radical response to the Turkish aggression against the Su-24M
16 comments
Information
Dear reader, to leave comments on the publication, you must to register.