January 2 2018
87
The past week was remembered by two bright events - the beginning of the “New Year Truce” and the exchange of prisoners. In the first and in the second case, Ukraine again violated the preliminary agreement.
At the front of the DPR, the APU began to break the “New Year's Truce” almost immediately after 00: December 00 23. Although, to be fair, it must be said that there were fewer violations in a week than during the “School Truce” and the “Grain Truce”. And at the front with the LC, there were practically no violations. 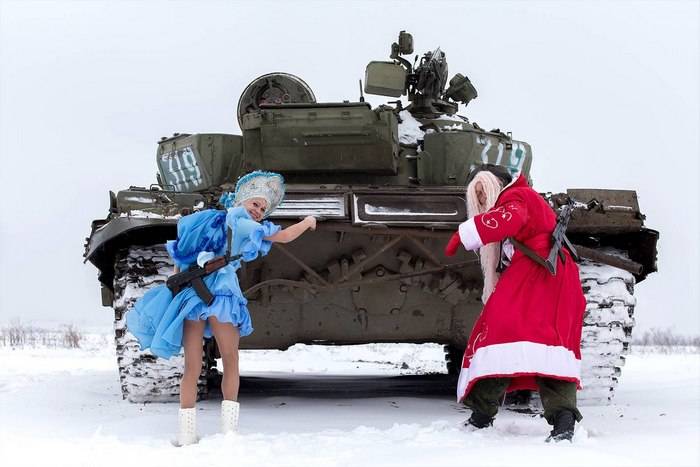 As for the exchange, the agreements were also violated. From Ukraine, the flow of civilians continued to move, although the parties agreed to block the road for the time of the exchange. We have done this, Ukraine is not. At first, there were about 100 people and 40 transport units, then the number grew to 2000 civilian and 150 transport units. Accordingly, the republics were forced to take measures and provide buses from Gorlovka in order to withdraw all civilians from the neutral zone.
The exchange itself began two hours later. And here Ukraine again violated the agreement. Instead of neutral, they said that the exchange will take place on the territory under their control. And during the exchange, it turned out that they donate to the Republics not 306, but only 237 people.
At first, Kiev said that they had already released part of the prisoners a long time ago and they themselves had to return, then stated that part refused to go. But they did not even provide video evidence, as we did in the DPR, when one of the captured servicemen of the Supreme Court of Ukraine decided to remain in the territory of the Donetsk People's Republic.
Constant provocations of the Armed Forces of Ukraine and nationalist battalions along the front line still lead to irretrievable losses of the Armed Forces of Ukraine. According to the official data of the Ministry of Defense of Ukraine, for the 2017 year the losses of the Ukrainian Armed Forces amounted to 208 dead and 1140 injured. However, the Ukrainian military leadership, fearing responsibility for the death of servicemen of the Armed Forces of Ukraine, hides the true figures of losses from the public. According to our data, the number of dead is about 500 and the wounded - more than 1500 military personnel.
According to our intelligence, in just five days of the “New Year's Armistice”, the loss of the wounded and 4 units and units of the Armed Forces of Ukraine, which occupy positions in the zone of responsibility of the Armed Forces of the DPR.
According to the DPR intelligence, in the area of ​​settlement Novotroitskoye arrived special forces group from the 3-th op SPN SSO APU (separate special forces regiment of the special operations forces of the APU). We do not exclude that under the cover of the “New Year's Armistice” this group will try to sabotage in the area of ​​the settlement. Dokuchaevsk.

00: 10 in the Gorlovka area over the city there was a powerful cotton, it worked our air defense.
12: 35 in the Frunze region (LNR) battle using machine guns and VOGs.
12: 50 in the area of ​​Kalinovka battle with the use of memory, AGS and mortars 82-mm caliber.
15: 40 Petrovsky district of Donetsk under fire from a pair of VSU sniper from the Marinka area.
On Monday, the Armed Forces of Ukraine fired at the DPR 4 times.
In the Donetsk area, firing 10 mines with a 82-mm caliber in areas of four settlements, and also fired from BMP and various types of grenade launchers and small weapons.
On Monday, the APU fired at LC 2 times, which violated the cease-fire declared from December 00.00 23 hours. The positions of our units in the areas of the settlements of Frunze and Kalinovka were subjected to shelling. When shelling the APU, 82-mm mortars, anti-aircraft guns, various types of grenade launchers and small arms were used. In total, 46 mines and grenades were released throughout the Republic.

07: 30, the village of Veseloe, under mortar shells in caliber 82-mm and 120-mm, was fired from the side of the so-called. "Anthill" near the village of Skilled on the territory controlled by the Armed Forces of Ukraine. In total, 6 mines with 82-mm caliber and 10 mines with 120-mm caliber were produced in our territory.
10: 10 in the Kalinovo area (LNR) by the servicemen of the People’s Militia shot down an unmanned aerial vehicle APU Skaywolker (PHOTO), which carried out reconnaissance and preparation for a fire adjustment. As a result of the defeat of the Ukrainian spotter by the servicemen of the people's militia of the LPR, they managed to avoid opening fire on the territory of the Republic.

18: 15 in the area of ​​Yasinovataya shelling with the use of k / k machine guns and grenade launchers.
On Sunday, the APU bombarded the DNI 3 times.
In Donetsk direction, releasing in the area of ​​settlement Cheerful 6 mines with a caliber of 82-mm and 10 mines with a caliber of 120-mm, as well as fired at the areas of Staromikhaylovka and Yasinovataya with grenade launchers and small arms.
On Sunday, the situation in the area of ​​responsibility of the LPR tended to stabilize; over the past 24 hours, there was no violation of the cease-fire regime.

08: 45 Petrovsky district of Donetsk under fire from LNG-9.
from 16: 30 to 17: 30, the village of Sosnovskoye under mortar fire. Total APU released 8 min caliber 82-mm. 16: 50 in the area of ​​Krutaya Balka shelling our positions from a k / k machine gun.
20: 45 in the Kalinovo area (LNR) shelling from machine guns and AGS.
20: 55 in the area of ​​Logvinovo shelling of our positions from machine guns.
On Monday, the Ukrainian Armed Forces fired at the DPR 5 times.
In the Donetsk direction, the enemy conducted shelling of the Petrovsky district of Donetsk and the settlement of Yasinovataya of grenade launchers and various types of small arms.
On Gorlovsky direction shelling was carried out Cool Beam.
On the Mariupol direction, the enemy released 10 mines with a caliber of 82-mm in the range Sosnovskoe.
On Monday, the APU fired at LC 2 times, using AGS, KK and small arms. The positions of NM of the LPR in the area of ​​the settlement were subjected to shelling. Kalinovo, Logvinovo.

On Tuesday, the APU did not violate the cease-fire. The Armed Forces of the DPR and LNR also strictly observed the truce

13: 00 in the n. Marinka and Krasnogorovka, located on the territory temporarily occupied by Ukraine, in violation of the Minsk agreements, in 7-8 kilometers from the front line, the Mi-24 APU helicopter patrols. Our air defense forces now, despite the possibility of destroying this goal, are not amenable to provocation.
13: 55 Petrovsky district of Donetsk under mortar fire, all from the point of view of the 30 th Ombre of the Armed Forces of Ukraine, 11 mines with a caliber of 82-mm were released.
17: 40 in the Verkhnetoretsky area (lower) under attack from machine guns and AGS.
22: 10 Zhabichevo under shelling mortar caliber 82-mm.
22: 10 Spartak fired from LNG-9.
22: 15 Ozerianovka shelling from to / to machine guns and AGS.
22:45 north of Gorlovka, the village of Zaitsevo under fire from a rifle and tank.
For Thursday, the Ukrainian Armed Forces fired at the DPR 5 times.
In the Donetsk direction, the districts of five settlements of the Republic came under fire from the Armed Forces of Ukraine, of which in the Petrovsky district of Donetsk and the settlement of Zhabichevo used 82-mm mortars, other grenade launchers and small arms. The shelling was conducted from the position of the 1 Battalion of the 28 Brigade, commanded by war criminal Krupko Yu.Yu. Also, the DPR soldiers prevented an attempt by the Ukrainian security officials to conduct aerial reconnaissance of our positions and shot down a commercial quadcopter.
In the area of ​​responsibility of the LNR, no violations of the cease-fire regime were registered on the part of the Armed Forces of Ukraine.

09: 00 Elenovka under mortar shelling caliber 120-mm.
10: 00 Verkhnetoretsk (bottom) under fire from grenade launchers and AGS. The fire was from the northern part of the village. The Punishers of the Armed Forces of Ukraine fired 7 shots from RPGs in peaceful quarters and around 30 shots from AGS-17.
21: 00 Verkhne-Toretsk (lower) again under fire, the entire APU released 4 mines in 82-mm caliber.
21: 30 in the area of ​​Kalinovka battle with the use of K / K machine guns and AGS.
On Friday, the APU fired at the DPR 2 times.
In the Donetsk direction in the area of ​​settlement Elenovka opponent released 1 mine caliber 120-mm, and in the area n. Verkhnetoretskaya Lower - 4 mines in 82-mm caliber, and also used automatic grenade launchers and small arms. Our Armed Forces observed the truce, and did not open return fire.
Over the past day, the APU fired at LC 1 times. The positions of our units in the area of ​​Kalinovka village came under fire. When fired from the side of n. Lugansk APU used an automatic machine-gun grenade launcher, large-caliber machine guns and small arms.
In total for the past week of the “New Year's Armistice”, from December 23:
- from the side of the APU fixed 24 shelling DNI.
Ukrainian army fired on the territory of the DPR over 200 shells and mines.
- APU fired at LC 5 times.
The fire was carried out from various small arms, large-caliber machine guns, manual and automatic grenade launchers and mortars of 82-mm caliber. Also on some parts of the front used technology.

More than 10000 ammunition was launched, including 1610 rocket launchers and 13612 artillery shells.

As a result of the aggression of the Ukrainian security forces in the general complexity, 1149 houses and infrastructure facilities of the Republic were destroyed and damaged. Vital objects of maintenance, schools, hospitals were fired on purposefully. Among the civilians of the Republic, 31, including 2 children, were killed and 236 were injured, of which 14 children were injured.
On the facts of these crimes, the Prosecutor General's Office of the DPR initiated more than 4000 criminal cases. Sent to the European Court of Human Rights and the International Criminal Court more than 1000 materials with evidence of the crimes of the Ukrainian security forces against civilians of Donbass.
The outgoing year was still characterized by the use of the Armed Forces of Ukraine vile perception of settlements in the gray zone, which is a gross violation of the Minsk agreements on the breeding of the parties. The seizure of the locality by the Ukrainian side is hailed as “another victory,” regardless of the fact that there were no units of the Armed Forces of the DPR in this locality. Thus, the Ukrainian public develops an opinion about the alleged successes of the Armed Forces of Ukraine in the ATO area. So it was in the settlements of Gladosovo, Travnevoe and Verkhne-Toretsk, whose residents hold protests against the arbitrariness of the Ukrainian security forces and the occupation. 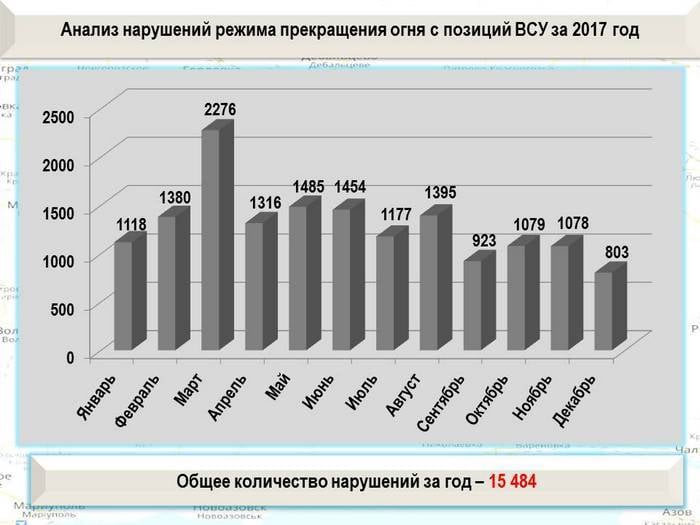 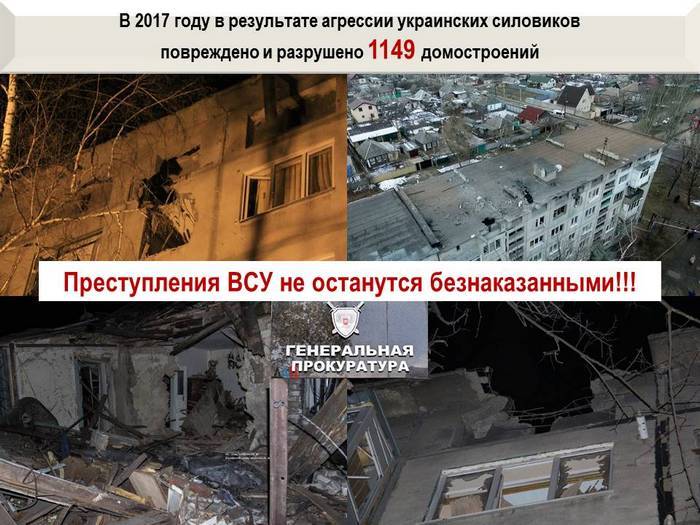 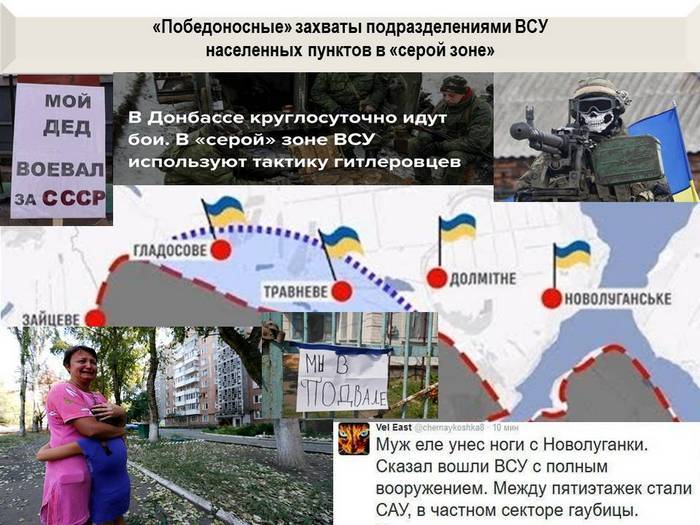 All patience and health!

Ctrl Enter
Noticed oshЫbku Highlight text and press. Ctrl + Enter
We are
Reports from the militia of New Russia for 7 September 2014 of the year
87 comments
Information
Dear reader, to leave comments on the publication, you must to register.