US surrounds Russia and China, bringing a nuclear war 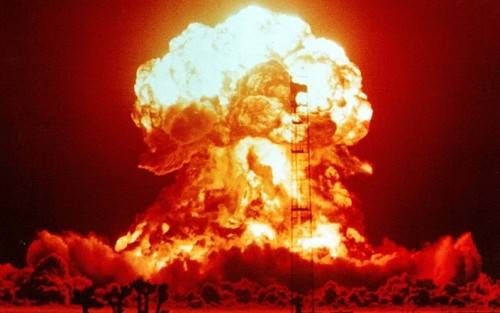 Possessing a reliable missile defense system, the United States may be tempted to strike first, which inevitably leads to a planetary catastrophe.

In modern military and political conditions, the military security of countries with nuclear weapons provided by deterring any state from the outbreak of hostilities against these countries. At the same time, the main and most important deterrent factor is the strategic nuclear forces (SNF), ensuring the possibility (threat) of guaranteed destruction of the aggressor.

Deterrence is the foundation of peace

The reliability of deterrence is determined mainly by the strategic stability of the SNF, that is, the possibility of preserving the nuclear potential of retaliation and delivering it to the attacker's objects for any aggression options.

Thus, deterrence from unleashing a war against a nuclear-weapon country is ensured only if the task of neutralizing its strategic nuclear forces cannot be guaranteed, that is, when during any actions of the attacking side, the defending side will always be able to cause unacceptable damage to the enemy .

An analysis of the views of the military-political leadership of the major nuclear-weapon States shows that they now still exclude the possibility of achieving goals in a general war (or even on smaller wars) without necessarily fulfilling the nuclear disarmament of the opposing side, if it possesses such weapons.

At the same time, the solution of this task is possible either due to a significant superiority in nuclear missiles (part of which is allocated for primary nuclear disarmament), which is practically unrealistic under current conditions of various contractual restrictions, or by creating an effective strategic missile defense (ABM).

In the second case, the basic principle of deterrence - guaranteed mutual destruction of the opposing sides - changes dramatically, if one of the parties creates a system of protection against nuclear missile strikes on the country's territory, economic facilities, the population and military facilities (especially nuclear missile facilities).

USA vs Russia and China

Thus, in the confrontation of the main world nuclear-missile opponents, the presence of an actively created at the present time a full-scale US missile defense system, aimed directly at blocking part of the potential of the Russian and Chinese SNFs (whatever the US said about parrying the threat posed by “Third” countries) can significantly reduce the effectiveness of both preemptive and retaliatory strikes by the Russian and Chinese SNFs and creates the basis for the aggressive policies of the United States and other NATO members, providing ample opportunities for I use force in resolving conflicts without fear of retaliation.

In addition, the presence of a reliable missile defense system creates for the United States and psychological advantages that strengthen the morale of the military-political leadership and the determination to use military force (including nuclear missiles) to achieve their goals. That is, the presence of a missile defense system gives the US a serious psychological advantage over any other power, and also reduces the psychological barrier in the use of military force, including nuclear weapons.

Consequently, the unilateral creation of a full-scale US missile defense system can lead to the emergence of a qualitatively new and very dangerous tendency in world relations, when the United States has a real (or perceived as real) opportunity to launch a nuclear strike and close with an antimissile shield from retaliation.

In addition, it is highly likely that after the deployment of the United States of a full-scale missile defense system, it can be expected that the already-stopped arms control and disarmament process will be completely eliminated.

One of them, apparently, is that the US and its allies are trying to gradually transfer the arms race in the world to non-nuclear rails, to direct it to the sphere of high technologies (conventional high-precision weapons, which are already capable of solving some strategic tasks, information technologies, and . d.), where the strong becomes even stronger, and the weak lags behind forever.

However, modern realities, on the contrary, have identified other global trends, showing that the US decision to deploy missile defense in conjunction with a common aggressive policy not only adversely affects the process of reducing the strategic potentials of the leading nuclear powers, but also provokes the creation, modernization and strengthening of missiles. third countries nuclear forces.

Thus, if the United States continues along the path of creating a strategic missile defense system, the result will be irreparable damage to the entire arms control process. Efforts aimed at searching for cooperative interaction of states in the field of ensuring military security will be discredited in the event that the United States refuses any self-restraint and international agreements in the field of nuclear missile weapons and missile defense.

Arms control has no prospects, since the most powerful military power undertakes actions that openly contradict its logic and undermine it.

US allies fear the development of missile defense

It is noteworthy that this side of the issue is the object of close attention in the countries that are US partners in NATO. In France, for example, they emphasize the existence of serious problems with the potential impact of strategic missile defense plans on the effectiveness of arms limitation efforts, especially in the area of ​​curbing the proliferation of nuclear weapons and missile technologies.

Representatives of official circles of other countries say that if the US does not recognize any restrictions on missile defense, they should also be prepared to deal with the possibility of certain countries withdrawing from multilateral arms limitation regimes, including the Treaty on the Non-Proliferation of Nuclear Weapons.

But, returning to the main problem of this article, we should once again strongly emphasize that the creation of the US missile defense system completely undermines deterrence, based on mutual assured destruction and creates conditions when the use of nuclear weapons by any country against the US becomes very problematic, and from the US for other countries - possible and even safe for the United States.

Ultimately, this creates military-technical prerequisites in order to resolve any differences or contradictions with any state of the world from a position of strength or simply by force.

The problem of the potential impact of creating large-scale missile defense systems on the political situation in the world, the military-strategic balance, the problem of the stability of strategic equilibrium is not new and was considered in detail in connection with the strategic defense initiative program in the early nineties of the twentieth century.

The general conclusion that was formed at that time was unambiguous: the desire of the United States to create a large-scale missile defense system can only be regarded as a desire to use its scientific and technical potential to achieve military superiority with all the ensuing consequences.

Despite the fact that in those years, the United States opposed the USSR, which had enormous scientific and technological potential and historical obviously maintaining experience of the military-strategic balance, the United States, even in those conditions, nevertheless had certain hopes for acquiring any significant advantages politically and militarily. At present, the “counterbalance” of the United States is not so large that it significantly exacerbates the situation.

The threat of a period of unstable deterrence

Thus, with the deployment of the US missile defense system, the threat of the emergence of an unstable both bilateral (Russia-US or China-US) and multilateral deterrence increases. This period can become very long and lead to a state of long-lasting violation of the stability of the military-strategic balance and international security.

The long existence of a period of unstable deterrence increases the risk that sentiment in favor of the active use of military force as the main tool of foreign policy, including by initiating all sorts of local wars and armed conflicts, will increase in US leadership circles.

In addition, the "opposed to the wall" opponents of the United States may be tempted (or rather, by decision of hopelessness) to use nuclear missiles (or other weapons of mass destruction) first out of fear of losing their nuclear missile (and indeed any other) potential.

And this scenario is especially dangerous, since it does not imply any moral, ethical, universal human, legal or other restrictions, which can lead to a catastrophe of global scale.

Ctrl Enter
Noticed oshЫbku Highlight text and press. Ctrl + Enter
We are
Military reform as an integral part of the security concept of the Russian Federation: Systematic dynamic assessmentNuclear triangle
79 comments
Information
Dear reader, to leave comments on the publication, you must to register.