January 15 2018
3
In May, 1940, the UK, fearing a possible attack by Nazi Germany, created civilian self-defense units, later known as Home Guard. For known reasons, this structure for a long time could not count on getting full-fledged weapons and equipment. Because of this, the fighters had to take the initiative and create the necessary systems on their own. The result of the technical creativity of the militia was a lot of the most interesting products. One of them was the Nuttall Flamethrower improvised towed flamethrower.


Due to the lack of small weapons and ammunition for him the British army from a certain time began to show interest in flame-incendiary weapons. Soon, Home Guard fighters began to share such interest. A direct consequence of this was the appearance of several designs of amateur and hand-made flame throwers. In just a few months, a significant number of improvised flamethrowers came into service with the militia, some of which were placed on the vehicle chassis.

Perhaps the most interesting flamethrower project proposed by the militia from the 24-th Staffordshire battalion of the national militia. Company "C" from the composition of this battalion was formed in the small town of Tettenhall, and it was there that the towed mobile model was created. 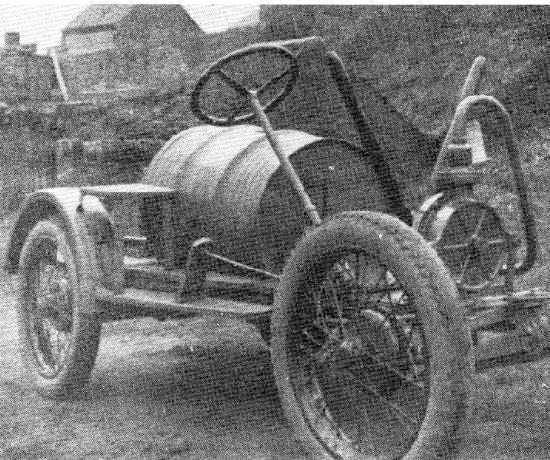 Approximately in the spring of 1941, one of the militiamen of the company “C” by the name of Nuttall offered to increase the firepower of the unit with flamethrowing weapons. Soon the enthusiast and his colleagues implemented this proposal and built a full-fledged workable sample. In the early summer of the same year, the resulting weapon was checked at the site, in the role of which one of the local fields was used.

For obvious reasons, the new model did not receive any official designation inherent in the development of the defense industry. However, he was assigned a name indicating the creator and the class of technology. Promising weapons were designated Nuttall Flamethrower - Nuttallla Flamethrower.

Without having serious resources and having limited production capabilities, the tettenholl militias were forced to build their own flamethrower exclusively from the available components. So, the basis for it was a converted car chassis, and devices for the storage and release of flammable liquid consisted of ready-made or specially assembled elements that were not distinguished by the complexity of the design.

For maximum combat effectiveness, the Nuttall Flamethrower system had to have a large fire tank, the transportation of which could be associated with certain problems. For this reason, Mr. Nuttall proposed to place a flamethrower on a slightly processed chassis. At the disposal of the militia there was a car Austin 7, which went for processing. Apparently, this machine could no longer be used in the original quality, and therefore received a new role.

The existing body, engine, transmission, etc. were removed from the existing biaxial chassis, built on the basis of the frame. In their places were only the elements of the chassis, the steering column with the appropriate mechanisms and the brake system with the control pedal. Directly on the resulting platform, it was proposed to install certain elements of the flamethrower. Sufficient mobility was to be ensured by the undercarriage with two pairs of single-inclined, spoke wheels.

The own engine was absent, and for that reason the flamethrower needed a towing vehicle. With it, the weapon had to go to the firing position. Saving the steering system to a certain extent simplified the transfer of the flamethrower: the driver could control the steered wheels, introducing the towed vehicle into turns, and also perform braking.

The largest element of the “Flamethrower Nuttollah” was the tank for storing and dispensing fire mixture. The militia managed to find a large metal barrel with a volume of 50 gallons (227,3 L), and it was used in construction. With the help of simple fastenings, the barrel was installed in the rear part of the existing chassis with a shift to the left side. The space in front of the barrel was intended for other elements of the flamethrower, and the driver was to be on her right.

The flamethrower of the 24 th battalion was to use a gas system to displace flammable liquids. In front of the chassis, a pump was placed to supply atmospheric air and create a working pressure in the main tank. What drive was used with the pump is unknown. It is possible that the pump was equipped with a manual drive. Nevertheless, as tests showed, such a system could show tolerable characteristics.

From the tank, the fire mixture was to flow into a flexible hose, ending with a tubular hose with a control valve. The simplest system of ignition of a jet with a constantly burning torch located in front of the nozzle was used. The hoses should be held in their hands or installed on a suitable base, and then sent to the enemy. Naturally, the guidance could be carried out only manually. Any sighting devices are also not used.

Information about the composition of the fire mixture is not available. It can be assumed that the combustible composition was not very complex and could be prepared from common resources available to the militia. Apparently, its main component was gasoline or kerosene.

The combat use of the Nuttall Flamethrower system seemed simple enough. Arriving at the specified point, the calculation was to equip the firing position and create the necessary pressure in the tank with the fire mixture. Then he had to wait for the enemy to approach and, while reducing the distance to the minimum, open the valve. The burning jet was supposed to set fire to various objects, and the unburned mixture falling on the ground could provoke additional fires.

In early June 1941, the Tettenhall militia brought a ready towed flamethrower to one of the local fields where it was planned to conduct tests. The 50 gallon tank was filled with flammable liquid and created a working pressure in it. After that a shot was fired. During the test, it was found that a gas mixture displacement system built from available components cannot provide high performance. The firing range was only 75 feet - less than 23 m. Thus, the Nuttumet Flamethrower, according to the main characteristics, lagged noticeably behind other systems of its time, including wearable ones.

However, the proposed sample had some advantages. The specificity of the design (or design errors) led to the fact that the flamethrower threw about a 1,26 liter of fire mixture in a second. For this reason, in terms of the flow rate of the “ammunition load,” the militia flamethrower hardly differed from other systems. At the same time he had a large storage capacity for fire mixture. One of her refueling was enough for continuous flame throwing for three minutes. Naturally, if necessary, it was possible to make individual shots of the required duration.

A serious flamethrower problem was the lack of any protection. The tank for fire mixes and other systems were not covered by anything, because of which any bullets or fragments could lead to the most dire consequences. Moreover, the absence of even a lightweight body could lead to ingress of water and corrosion of certain parts.

However, the Homeguard 24 th militants of the Home Guard battalion simply had no choice. They were forced to adopt not the best, but still existing flamethrower. Almost immediately after the completion of the tests, the original Nuttall Flamethrower system was put into operation.

According to the surviving data, in the case of receiving an order to deploy a company, the calculation of the flamethrower should have taken a position under the bridge at Lake Dam Mill. Apparently, a full-fledged firing position was equipped there with some protection from available materials. The deployment of a flamethrower at the bridge, as it was supposed, made it possible to protect the only highway in the whole area and thereby slow down the advance of the enemy troops.

It can be assumed that, in the future, the C Company of the 24 Battalion, which built for itself the original towed flamethrower, took part in various exercises and repeatedly received the opportunity to test these weapons in practice. Unfortunately, the details of the operation of an unusual sample remain unknown.

Fortunately, the case of the Nuttall Flamethrower flamethrower against the real adversary did not reach the real combat use. Despite all the fears of London, Hitler's Germany rather quickly abandoned plans to land on the British Isles. In the context of the project of Mr. Nuttoll, it can be assumed that this was only for the best. The flamethrower on the wheeled chassis was not distinguished by high combat qualities, and therefore did not pose a particular danger to the advancing enemy. Moreover, in some situations he was more dangerous for his own calculation.

Operation of the original flamethrower could last long enough. At the end of 1944, Home Guard was disbanded as superfluous, and no later than this time, the Nuttall Flamethrower system could be abandoned. The further fate of the flamethrower is unknown, but it is obvious: it is unlikely that someone would restore the base car. Most likely, the sample was disassembled for parts. Until our time, it has not survived. Now a flamethrower is known only thanks to a single photo and a not too detailed description of it. stories.

Unusual towed flamethrower designs Mr. Nuttoll was not the only representative of his class, the result of the work of the national militia. Similar systems of one kind or another existed in other units. A common feature of all such handicraft workings was a low technological level and, as a result, very limited opportunities, often associated with serious risks. Nevertheless, it should not be forgotten that such weapons were created in a difficult period and were intended for the early rearmament. In addition, it showed the willingness of citizens to defend their country at any cost. Despite numerous technical and operational problems, the improvised weapon successfully coped with similar tasks.