Russia presented the Club-T missile system for the first time at the exhibition. 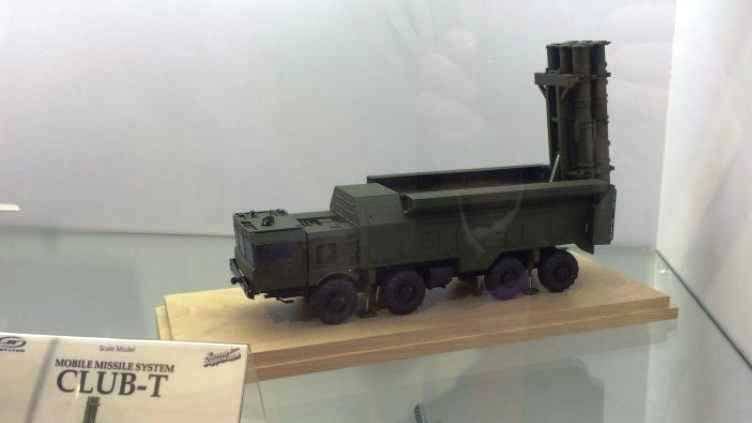 “Unlike the similar ground-based Club-M complex (demonstrated at the MAKS-2007 air show, which was used, the Club-T complex is already using the same programs, which will help you with the drop-in flyers), the Club-T complex is the same as the owner of the program, you will be able to fly to the open-market programs of the X-NUMX and 354KEE types of objects. Accordingly, the targeting equipment with the corresponding machine has been removed from the complex, and only autonomous launchers are left on the MZKT-3 chassis (54х1), each of which hosts six transport-launch containers, ”the article says.

What specifically cruise missile version 3М14Э1 differs from the previously demonstrated 3М14Э / КЭ missile is not disclosed. The stated range of flight 3М14Э1 - 275 km. The mass of the missile warhead - 450 kg.

It is reported that "the launch of cruise missiles from the Club-T launcher can be done within 15 minutes from the moment of deployment, the missiles are launched at intervals of 5-10 seconds."

Also, Novator's head of external relations department, Mikhail Pakhomov, said that the company is close to completing work to integrate the anti-ship missiles 3М54Е and 3М54Е1 into the Club-T complex (as you can see, their use is assumed according to external targeting).

Bmpd comment: “Presumably, the Club-T complex self-propelled launchers are analogous to those of the most challenging attacks from the US allegedly“ extended ”launchers of the Iskander-M complex variant with the notorious 9X729 cruise missiles, which violate the terms of the Treaty on the Elimination of Medium and Short Range Missiles 1987 of the Year.

Ctrl Enter
Noticed oshЫbku Highlight text and press. Ctrl + Enter
We are
Umka platform and the future of Belarusian armored vehiclesDemonstration of the chassis MZKT-79291
52 comments
Information
Dear reader, to leave comments on the publication, you must to register.