The war "is already underway." US Marine Corps v. Russia

January 6 2018
93
If in the autumn the prospect of a military conflict with the Russians in Eastern Europe pushed the command of the US Marine Corps to strengthen the combat capabilities of its units, in the winter the top command of the Corps spoke of an “ongoing” war. 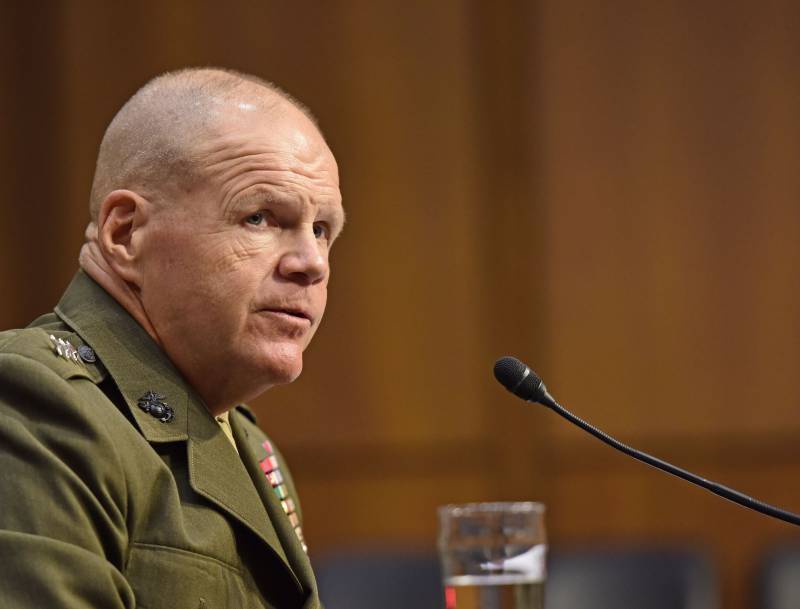 The commander of the US Marine Corps, General Robert Neller: "The war is already underway"

The activity of the US Marine Corps has increased since the summer of 2015, against the backdrop of the notorious "Russian threat".

According to the «The Times»In June 2015, hundreds of US marines were assigned the task of redeploying to British and other warships of NATO countries (Spain, the Netherlands, Italy and France) in the Mediterranean. Marines were instructed to become part of the NATO rapid reaction force.

The main reasons for the redeployment of the US military to Europe in NATO, no one has hidden. It was about "the possibility of rapid response to Russian threats in Eastern Europe." The title of the material in the Times did not leave any doubts about the intentions of the NATO forces: “The American marines are redeploying to British ships to counter the threat posed by Putin.”

Two years later, in the summer of 2017, the command of the marines was already actively preparing for a war with Putin’s “green men”.

Skills of conducting fights “with Russians” were perfected by marines directly in Eastern European cities. For this purpose, the Camp Ledzhen military base specially “decorated” by the Americans was used. To impart "Russianness" actors were hired, costumes were sewn and even the "flavor" of manure was artificially created. This was written edition "The Daily Beast".

The marines were trained not to attack mines, not to give phone numbers to prostitutes, to wade in the heat on dirty rural roads - and all this under the artificial smell of gunpowder and manure. “Russian speech” came from somewhere: the unfortunate civilians asked the Marines for “help”.

According to the scenario, the enemies of the Marines were the Russian-speaking "rebels" and Putin's "green men". The marines' training organizers called this scenario the “third world war”. No kidding.

In war as in war. “I am deeply convinced that here we are saving lives. There is not a single situation that we could not model. I am impressed with what the marines are doing, which we train every day, ”says Greg Jackson, a veteran of the Marine Corps. According to him, if the units of the United States Marine Corps are deployed in Ukraine, then this means that the Third World War is in full swing.

Mentioned Jackson can hardly be called a alarmist or a conspiracy theorist. The fact is that the command of the marines constantly insists on the coming war with the Russians. At the highest level. Wars are waiting from day to day. Whether in January, or in February. Either after Putin's re-election.

In the late autumn of 2017, intensive training began on the US Marine Corps for military operations with Russia. In all seriousness.

US marines prepare for conflict in Eastern Europe: The US Marine Corps is considering the prospect of an armed clash with Russia. “Concern” about “hostilities” was voiced at the level of the MEF (Marine Expeditionary Force, US Expeditionary Force). About this newspaper wrote "Military Times".

Until now, the Corps believed that it would hardly be necessary to deploy the full complement of the expeditionary forces of the marines. This structure is the most powerful; it serves over 25000 marines. MEF functions have not previously been prioritized. However, in November 2017, Lieutenant General Robert Hedelund, commander of the Marine Corps in North Carolina, said that MEF headquarters was returning "some opportunities."

Speaking at the annual national defense conference, the general said that the MEF units “must be prepared” to support efforts to counteract the “war in Europe”.

The Military Times recalls that in recent years, the United States Marine Corps has already expanded its presence in Europe (in Romania and Norway).

The “European mission” of American marines is changing “against the background of Russian aggression,” according to newspaper material. The corps continues to prepare for the implementation of "a variety of missions". General Robert Hedelund hints: if “anywhere in the world” a shot is heard, “marines want to be there.”

At the end of December, 2017 received a climax from the high command of the Marine Corps.

The commander of the US Marine Corps, General Robert Neller, said that the marines must be ready for a big battle. Why are there ready: the battle is already underway!

“I hope I’m wrong, but the war is already underway,” says Robert Neller, whose quotes are quoted. Washington Post.

He explained to the assembled marines what kind of war it was: “You are participating here in the struggle, the information struggle, the political struggle, by your presence alone”.

The presence of marines in Norway is associated with supporting NATO and European Command operations, as well as helping the Marine Corps in preparing for cold and mountain conditions.

Mr. Neller and other commanders say that the marines must be prepared to change their mission even in peacetime. In particular, Neller predicted that the Pacific region and Russia would be at the center of any future conflict that would occur outside the Middle East.

Neller is a member of the Joint Chiefs of Staff, the highest of the Pentagon’s governing structures responsible for contingency planning.

Initially, the newspaper notes, it was impossible to understand how serious the general is in his prediction of the coming war, as far as his statements testify to the “ongoing” real war.

Lieutenant Colonel Eric Dent, a spokesman for the general, told the Washington Post correspondent that Keller’s comments were intended to “inspire” the marines. According to his clarification, the general allegedly told the Marines that not one of the four countries to which he referred in his prophecies (Russia, China, Iran and North Korea) does not want to "go to war."

“The idea of ​​war is a way to motivate warriors to train and improve readiness,” said Dent. “I cannot imagine any professional commander offering his soldiers, seamen, pilots, marines and the coast guard to think that the conflict is only supposed ...”

Neller and others, for good reason, repeat: “If you want peace, get ready for war. And this is exactly what we want to do and do. "

On the other hand, President Trump has recently unveiled a new national security strategy for the fanfare. There it is explicitly acknowledged that Russia and China are competing with the United States in the struggle for global influence. Both states pose a potential threat to the United States. "China and Russia are challenging American power, influence and interests, trying to undermine American security and prosperity," the document says. It also indicates that the Russians and the Chinese are “determined to increase their armed forces and control information in the world, thereby“ suppressing their societies and expanding their influence ”.

As for the alarming statements of General Neller, the correspondent tried to clarify them. TASS, appealed to the press service of the Pentagon. However, duty officers of the service “found it difficult to answer” the questions of the correspondent about Neller’s point of view and whether it reflects the position of Defense Secretary James Mattis (by the way, the retired General of the Marine Corps).

Should I be wary of the Marine Corps?

"The US Marine Corps is a fairly serious threat," said RIA News" military expert, first rank captain Konstantin Sivkov. - In the event of aggression, the US Marines will be primarily involved in the north direction, its goal will be to capture the bases of submarines in the Murmansk region. Landings in the south can occur in the Crimea, in the Far East, this is likely to be Kamchatka, where strategic submarines are also based. ”

Sivkov recalled that the Russian armed forces are practicing the tactics of antiamphibious operations. In general, the classic naval landing, according to experts, is a goal quite vulnerable. The composition of the amphibious assault forces of the US Navy, required for the landing of just one division, may consist of more than fifty ships, which eliminates the element of surprise and gives the enemy time to prepare for the defense of the coast.

It should also be pointed out that one of the main threats to enemy troops is coastal missile and artillery systems. Among those, Russia has the Ball complex, capable of hitting targets at a distance of 260 km. Another "surprise" for the coolest American guys can be the Bereg artillery complex: it destroys surface targets at a distance of 22 km. A warm meeting with the Russians, thus, will take place exclusively at a distance and certainly will not become an “easy walk” for those who are now intensively training in preparation for war.

American generals ought to use their tongue less: every word about a “going war” immediately responds not only among the servicemen to whom these speeches are addressed, but also among journalists who are dragging away such “information” all over the world.

Ctrl Enter
Noticed oshЫbku Highlight text and press. Ctrl + Enter
We are
Situational analysis of the death of the MH17 flight (Malaysian Boeing 777), made on the basis of engineering analysis from 15.08.2014About "PRO"
93 comments
Information
Dear reader, to leave comments on the publication, you must to register.