Can Borey-B destroy American AUG? About the resonant statement of Vasily Dandykin 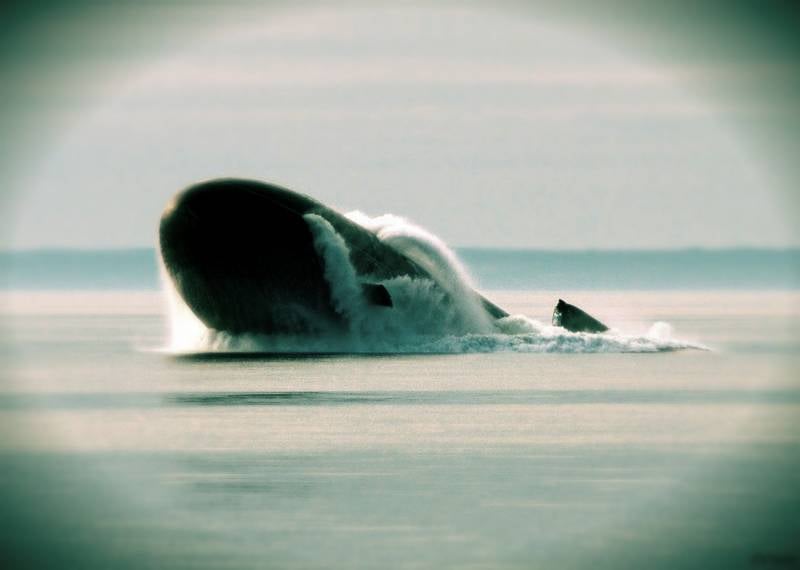 On November 7, 2017, during the board meeting of the Ministry of Defense, Valery Gerasimov, Chief of the General Staff of the Russian Armed Forces, announced the launch of a program to develop an improved modification of the 955B Borey-B strategic missile cruiser. The design of the updated version of the SSBNs based on the improved hull from Borey-A Ave. 955A, specialists of the Central Design Bureau of Marine Equipment Rubin (CDB MT Rubin) will be engaged at the beginning of 2018, while the laying of the first SSBN should take place no later than 2023 of the year. According to numerous experts, the Borey-B, despite its belonging only to the improved fourth generation SSBN, will be able to represent the advanced submarine component of Russia's nuclear triad for several decades, perfectly complementing the multipurpose impact capabilities of the low-noise submarines of 885M Yashen-M and promising "Huskies" by the power of multi-unit nuclear "equipment" of the 3М-30 "Bulava" SLBM.

At the same time, according to statements of some military experts directly related to the Navy, Borey-B will be fully capable of complementing or even replacing (of course, if necessary) the Ash and Husky in their direct assignment - the implementation of massed rocket strikes on strategically important surface and ground targets of the enemy with the use of anti-ship and strategic cruise missiles of the Caliber-PL and Onyx families, as well as preemptive torpedo attacks on the underwater and above-ground enemy dix. The presence of such capabilities in promising nuclear submarines of the 955B “Borey-B” project was recently told to the 360 publication by a military specialist, captain of the 1 rank, Vasily Dandykin.

Nevertheless, this opinion caused a fairly large resonance in the comments of some military analysts and news Runet resources, which began to copy-paste interviews with V. Dandykin from Polyexpert and 360. Not without the participation of the well-known analytical / news resource "Military Parity", where in the comments to Dandykin's statement one could see many negative statements in relation to the existing and promising variants of the 955 / M SSBN Borei / Borey-M. In particular, the submarines of the project, in accordance with the firmly entrenched in the American navy the stereotype of the Soviet nuclear submarines of the 2nd and 3rd generations, called "roaring cows ... not intended for quiet conflicts." Another commentator, an “expert”, with 100% probability claims that, literally: “any Virginia will open Borey-B before its crew begins to realize that in the immediate vicinity of the AUG US Navy.” But let's think, starting not from the empty guesses of the pseudo-expert commentators, but from the technical merits of the existing modifications of the Boreev described in official sources.

Like all modern foreign nuclear submarines carrying ballistic missiles (including Le Triomphant and Ohio), the Borey 955A project is represented by an advanced general construction 2-hkaskadnaya depreciation system based on several platforms with individual groups of rubber-cord pneumatic shock absorbers. All mechanical elements generating vibration waves (including a single-shaft PTU with a main turbo-gear unit OK-9BM with 50 power, thousand hp, a nuclear power plant with a water-cooled reactor and a steam generating plant OK-650B, as well as alternating turbine generators current OK-2 and diesel generators), which without damping structures form sonar waves, adding dozens of “critical” decibels.

Also, specialized rubber anhydroacoustic coatings were used to reduce acoustic visibility. The hydrodynamic propulsion unit GRDK-3.5М complements the picture, providing the Borey-A submarines with a level of acoustic visibility comparable to the same MAPL of 885 Alyan, considering that in the early versions there are no jet propulsion systems. And now let's think for a moment: if strategic missile submarine cruisers of the 667BDRM Dolphin (3 generation), which are distinguished by a very honorable age and lack of water cannons, were detected by an American hydroacoustic system AN / BQQ-5 in the unfavorable hydrological situation MAPL class "Los Angeles") at a distance of 10 km, and in good (calm) - 30 km. Moreover, on the “Dolphins” there is a twin propulsion system, represented by low-noise fixed-pitch 5-bladed screws. It is not difficult to guess that the updated “Borei-B”, to which they “threaten” to install an even more advanced water-jet, can be detected by the above GAK at a distance of up to 10 km (in difficult hydrological conditions).

At a distance of 15 — 25 km, the updated Borey can be detected by the AN / BQQ-10 (V) 4 hydroacoustic complex, which is the basis of the Virginia low-noise multi-purpose nuclear submarines, and the more modern wide-aperture GAS of the LAB type (installed on Virginia The “3 block” will cope with the task at a distance of 35 — 45 km, which will also not be enough for the full defense of several US Navy AUGs operating at a great distance from each other. As for the capabilities of the SQS-53B / C SAR installed on class destroyers Arley Burk and Ticonderoga cruisers, their sensitivity is unlikely to detect the Borey-B even in the middle of the first far-field acoustic illumination, and this is a real problem for US carrier strike forces, because the same torpedo UGST “Physic” or TPS-53 has an 50 km range, which means that AUG can be attacked by Borey-B without entering the SQS-53B / C sonar systems and other GUS given to the AN / SQQ-89 system (especially in complex hydrological conditions).

At the same time, the submarines of the updated 955B project will be built around the promising combat information and control system Omnibus and the improved Irkysh-Afor-Borey SAR, able to detect the AUG acoustic profile at a distance of 250 km. Consequently, in the duel situation, “Borey-B”, if it will lose to “Virginia”, is insignificant, and this will definitely give an opportunity to deliver a crushing blow to the surface enemy from a distance of more than 200 km, using the 3XXUMUME anti-ship missile from 54 mm torpedo tubes or other anti-ship vehicles from transport-launch glasses installed in adapted cells of mine launchers by analogy with Ohio.