Between life with a curse and death with a victory

It’s not in vain that these warriors gave their lives here;
our nation, by the will of God, must regenerate freedom,
and may the government of the people live forever
of the people
for the people.

A. Likoln. Performance in Gettysburg

95 years of formation of the USSR. 26 years of its section. 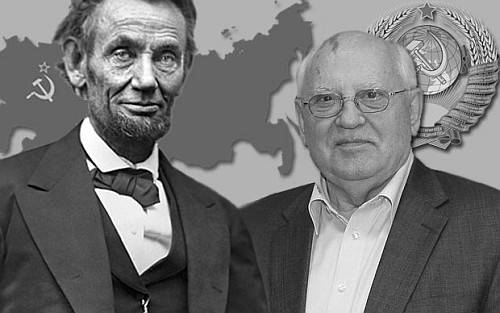 In March, 1991, 76% voted to preserve it. In December 1991, almost no one came to his defense. Almost no one came out and picked up weapondefending their homeland. True, many said: "Gorbachev's country is not my homeland: a terrible end is better than horror without end."

It is unlikely that they were right - but it was possible to understand them.

Everything was unexpected - but it was not the first time. stories: USSR faced the threat of partition through 72 of the year after the emergence of its statehood. The United States overtook a similar crisis in 74 years after their constitutional formation.

In one country, the president was Mikhail Gorbachev. In the other - Abraham Lincoln. Gorbachev, having betrayed and selling all that is possible, is still alive today. Lincoln - paid with his life for the victory.

A few days before the assassination, 9 on April 1864, the army of southern separatists led by brilliant General Lee capitulated. The war for the integrity of the United States of America, as we call this country today, ended with the victory of the unionists, those who fought for the Union, as this country was called then by its defenders.

The war began almost immediately after the election of Lincoln to the presidency of the United States. It lasted from the spring of 1861 (February 6, the separatists declared their withdrawal from the Union) until April 1865 - four years - and ended a week before his death.

Approximately the same historical period was required for another Union - the Union of the Soviet Socialist Republic - in order to go from its formation to its own crisis of integrity.

M. Gorbachev was alive and shone with excellent health in 74, fourteen years after he deserted from the presidency and refused to fight for the unity of his country. Abraham Lincoln was killed six days after the victory, at the age of 56.

That is why one could stop the partition of his Union, and the other could not?

Pay attention to some dates. 6 November 1860, the Lincoln was elected President.

Southerners said: “Let it be, what will be - maybe the Potomac River will become red with blood, and Pennsylvania Avenue will be covered with mutilated bodies ten sazhes high, let the last remnants of freedom be swept away from the American continent, but the South will never agree to such humiliation and such shame as the solemn introduction of Abraham Lincoln to the office of president. ”

4 February The 1861 delegates from Montgomery and Alabama established a provisional government, called the Confederation of American States. Jefferson Davis from Mississippi, and Alexander Steffens from Georgia as vice president, were elected president.

This was done precisely in response to the election of Lincoln. Precisely because he defeated their candidate. Five years ago, in the 1856 year, he warned: “Who is looking for separation: you or us? We, the majority, do not want division, but if you try to separate, we will not allow you. In our hands, a purse and a sword, an army and a navy, we manage the treasury - you are not able to separate. So, we will not divide the Union, and you will not dare to separate ".

February 11 Lincoln arrived in Washington. 4 March he took the oath. He said:

“... Until now, the split was only a threat to the Union. Now a serious attempt is being made to carry out this threat.

... In accordance with the universal law and the Constitution, I believe that the Union of our states will exist forever.

... No state, by its own prompting, can leave the Union ... and acts of violence within one of the states or several against the authority of the United States are ... rebellious.

... As far as I can, I will take all measures in accordance with the Constitution so that the laws of the Union are faithfully observed in all states.

... I hope that this will not be considered a threat, but only the declared intention of the Union to constitutionally defend and preserve its integrity.

... Our country, according to all regulations, belongs to the people who inhabit it. When the existing government annoys the people, it can use its constitutional right and improve it, or apply its revolutionary right to partially replace ministers, or even to overthrow it completely.

... In your hands, my disgruntled compatriots, and not in mine is the solution to the controversial issue of the civil war ... You did not swear to the sky that you would destroy the government, while I solemnly swore “to preserve, protect and defend it ".

And the process of state withdrawal from the Union ceased. Why?

Maybe just everyone who wanted to go out was already out? Not. And later, the states wanted to stand out. But did not stand out. Why?

Because in those states where such issues were intended to be brought up for discussion by the local Congress, Lincoln generals posed artillery batteries around the Congress buildings and warned that they would open fire after the decision to leave. And on the eve of voting, the most active deputies, supporters of the department, were simply arrested.

Here are excerpts from the chronicles of the first months of the war:

5 March-14 April 1861, the siege and seizure by the rebels of Sumter form in North Carolina.

15 April Lincoln announced the mobilization of 75 thousands of people. Support rallies are rolling across the country, immigrants from Europe form volunteer regiments - 4 Irish, German 4. The Italian Legion "Garibaldi Guard" is on alert.

A. Lincoln on the situation of the week: “An unreasonably large part of the muskets and rifles somehow got to the Southerners ... Officers of the federal army and fleet in huge numbers resigned; a significant number of them raised weapons against the US government. "

In Baltimore, the telegraph is seized by supporters of the branch. Washington is isolated by rebels from the northern states.

20 on April, according to A. Lincoln's plan, bailiffs raided all telegraph offices by the state of the North and seized the originals of all the sent ones and copies of all the telegrams received during the year.

Without asking Congressional consent, Lincoln spends millions of dollars from the US Treasury to hold emergency events.

"I had to decide whether I would allow the government to fall down immediately ... or use the broader powers that the Constitution will clothe the President in the event of insurrection, and try to save the government."

23 April 1861. Washington has no troops. Not even an arsenal is guarded. The streets are dead. Lincoln exclaims "Where are they?" Where are they? ”

24 April. Reinforcements did not fit. Dozens of sent scouts have not returned.

The 6-th Massachusetts regiment comes to the White House, the Hall of the Senate is turned into his bedroom.

April 25 The New York Regiment 7 enters Washington. Then teams arrive from Rhode Island and from Massachusetts. Railway workers volunteers restore the road to Annapolis destroyed by the rebels. Communication with the North is restored.

In Richmond and its surroundings, the army is concentrated in the 100 000 man, Lincoln in Washington has the 10 000.

3 May 1861 announces the mobilization of another 42 034 volunteer for the 3 year. Together with the recruited and remaining loyal units, the army increases to 156 861 man, fleet - to 25 thousands.

From the windows of the White House, Alexandria is visible through binoculars, captured by the rebels.

24 May begins construction of fortifications around the District of Columbia, surrounded by slaveholding states.

March-May 1861. General Anderson's troops were deployed in Cincinnati to prevent the withdrawal of Kentucky.

Lieutenant Nelson is transporting 100 thousands of "Lincoln shotguns" to Kentucky, which are distributed among Union supporters.

24 April Baltimore votes for the exit of the state of Maryland from the Union.

13 May General Butler throws 1000 soldiers to Baltimore and sets guns on Federal Hill dominating Baltimore. An appeal has been published, warning that the troops will respect the laws of the Union.

25 May 1861 in Maryland begins arrests by military supporters of the branch. Chairman of the Supreme Court Taneby is trying to challenge the illegal arrests, the military ignore him. Taneby writes protest to Lincoln.

June 27 in Maryland arrested police chief George Kane, known for his commitment to the Confederates. Then arrests of other police officers begin.

In June, supporters of the Maryland branch were put down, Lincoln supporters were elected to Congress at gunpoint, Governor Hicks forms four regiments loyal to the Union.

4 July Lincoln wrote a response to the Chairman of the Supreme Court: “... It was considered appropriate to give the commander in chief the right to arrest and imprison, in appropriate cases ... customary public security threats, without following the usual legal procedure ... rather than allowing the destruction of all laws and the collapse of the government? ... It was established that we are dealing with a riot ... ... The Constitution does not say who should have such power. "

July 6 Secretary of War Cameron reports to Lincoln that the 64 Volunteer Regiment and a brigade of regular troops are in the vicinity of Washington. The total number of the army of the North brought to 225 thousands of people.

“Is the fatal weakness inevitable for any republic? ... Should the government be strong enough to protect the freedoms of its people, or so weak to not be able to protect themselves?” There is no other way to save the country ”apart from providing the government with all the military authorities..."

Under the roar of applause, Congress allocates 400 million dollars to Lincoln and gives authority to create an army of thousands of people at 400.

The Senate approves all presidential appointments. The new law on the army allows you to call on 400 000 volunteers. All extraordinary, sole and restrictive actions of the president, taken since the beginning of the war ...

Can one imagine that Gorbachev would act like that?

You can continue. So it was four years. Lincoln in critical situations on a dashboard tossed between the running regiments and turned them into battle.

Can one imagine Gorbachev, who has driven the Central Committee apparatus to build barricades?

When Union courts only tried to justify those who appeared before them on charges of refusing to fight as part of the allied forces, Lincoln said that such judges would be put in prison.

Can one imagine that Gorbachev would act like this?

Where Lincoln sent the army into battle, Gorbachev addressed the messages.

But America stands and dictates its will to the whole world today. But the Soviet Union, alas, no.

So who is right?

Or maybe the fact is that Lincoln simply knew nothing about the “new political thinking”, but he knew that he was an American, the US president and his duty was to save the Union.

And Gorbachev, on the contrary, did not know anything about the laws of real politics, did not know that he had a duty to the country and the party, but he knew how sweet it was to hear the applause of Western audiences, he knew how nice it was to think about his role “The great reformer”, he knew how pleasant it is to bathe in vanity ...

Ctrl Enter
Noticed a mistake Highlight text and press. Ctrl + Enter
We are
About Stalin and KhrushchevWhat you didn't want to know about England
59 comments
Information
Dear reader, to leave comments on the publication, you must to register.