The Fire Hammer of the Third Rome. Part of 3

January 11 2018
86
But, right up to the beginning of 1917, the disproportionately small Russian heavy artillery did not sufficiently influence the course of the war. Organizationally, she also was not associated with field compounds. And even the divisions attached to the army corps occasionally - to participate in major operations.


The usual situation was battery division of divisions — and the batteries “traveled” through armies and corps. Thus, an active participant in the Offensive of the South-Western Front 1916 - the 17 Army Corps - was strengthened by the Brest-Litovsk heavy artillery division only in the Brody-Radziwill area. The division supported the corps only 2 weeks - until the capture of the city of Brody. Thus, from 22 May to mid-July, the strike force fought without the support of heavy artillery.

But the proportion of Russian heavy field artillery to 1917 was noticeably increased. In addition to the aforementioned types of guns, 105-mm Japanese and 120-mm French guns, 150-mm German and 152-mm English howitzers appear on its armament.

With 1916, the heavy artillery is enhanced by “tractor” 203-mm and 228-mm howitzers (Vickers systems) - adapted for carrying tracked tractors. Kanet's 6-inch guns (a system of value ranging from 15 to 16 kilometers) were also adapted for traveling on tractors and railway platforms. At the Reserve Heavy Artillery Brigade, a special school of tractor artillery was created - all officers and senior heavy artillery fireworks were required to complete it (according to an accelerated program).

Tractor batteries were perfectly equipped with passenger cars and motorcycles (some of them with a sidecar). For the command of each group of 8 machines, a special technician officer was appointed, who was assisted by a technical master. All officers and fireworks were given a riding horse. A team of scouts and telephonists had 40 riding horses. For the transportation of shells, the tractor battery had 8 three-ton trucks, and for fuel - 2 tanks (on 5 and 3 tons). The commander of the tractor battery was relied on with a passenger car, and for other battery officers, another 2 vehicle. And, as the eyewitness noted: “With confidence, it is possible and should say that not a single army had such rich equipment!”.

When the Kanet 1915-inch cannons appeared on the front of the 6 in the spring, the complexity and cumbersome installation of these guns was later taken into account when organizing the TAON.

The organization of the second type of heavy artillery, positional, resulted in the creation of separate positional divisions and high-power batteries. 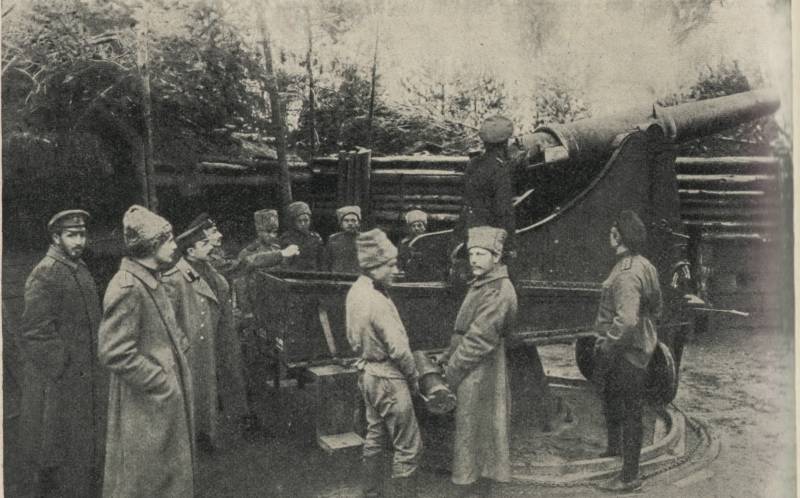 And finally, a special purpose heavy artillery corps appeared - the TAON. It consisted of 120 guns - 305-mm calibers (including the 12-inch “obukhovka” and the above-mentioned tractor artillery guns). As General V.I. Gurko recalled, at least three quarters of all Russian heavy artillery, which entered service in the winter from 1916 to 1917, was sent to the front to take part in the large-scale offensive of the 1917 campaign of the year. Soon, the 48 Army Corps under the command of General Scheidemann was formed from this artillery - a feature of the connection was that its combat units were exclusively artillery.

T. o. - there was a combination of heavy artillery of operational and strategic purpose. And the candidacy of his commander - Lieutenant-General G. M. Scheideman, an artilleryman-academician, was chosen perfectly. In total, by the spring of 1917, the TAON numbered 338 artillery barrels. Tractor artillery and large-caliber howitzers from TAON actively and effectively manifested themselves during the Summer Offensive of the South-Western Front 1917 (but the Northern Front was most seriously saturated with heavy artillery — promoted by the communication lines, the echeloned nature of the opponents' defense, and the importance of the covered direction). 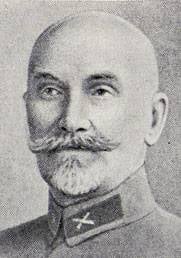 Thus, in the matter of creating breakthrough artillery, Russia occupied a leading place among the other states parties to the war.

TAON has become a powerful fire resource - Stakes fire reserve. After all, if heavy field artillery was part of army units, submitting to the command of the latter and replenishing the field light artillery with its power in breaking through the fortified lines of enemy defenses, TAON became a powerful means of operational and strategic reinforcement of strike formations - when the creation of a powerful fire fist was required. In the course of strategic offensive operations, the TAON was attached to the attack corps and armies - its guns were combined into artillery groups subordinate to their chiefs, chiefs of artillery, and inspectors of the formations. The power of the caliber TAON and its organizational independence assumed the use of heavy artillery only as a powerful fire hammer. The abnormal weakening of the artillery grouping due to non-strike combat sectors was also excluded.

It is safe to say that if the Russian army had at the very beginning of the First World War at least an equal number of heavy artillery guns with Germany, then the course of the war and the whole история Russia would be different. E. von Ludendorff not for nothing emphasized the importance of having heavy artillery for the success of field troops - and in almost all German operations we note the presence of heavy and very heavy guns. So, even the landsturm, which was part of the 8 Army during the operation at Tannenberg, had guns of serf artillery. E. von Ludendorff rightly pointed out that by the beginning of the war, none of the warring nations, except the German one, had been able to correctly assess the benefits of artillery concentration. Moreover, the German army also used heavy Austrian 305-mm howitzers, as well as (taking into account the experience of hostilities) from the end of 1916, at the insistence of Emperor Wilhelm II began to receive long-range guns with a flat trajectory of firing, taken from inactive ships.

W. Churchill also emphasized the special significance of heavy artillery: “I was very interested in the fate of the huge mass of heavy artillery, which I, as the Minister of Armaments, prepared ... This weapon, the production of which requires one and a half years. But for the army, both for offensive and for defense, it is very important to have a large number of batteries at your disposal. I recall the struggle that Lloyd George waged with the War Department in 1914 ... ". Further, in his letter to the Prime Minister from 10. 9. 1939 of the year he wrote: “... most of all heavy artillery in the expeditionary corps is lacking. If it turns out that there are not enough heavy batteries, then it will cause fair criticism. ”

Speaking about the advantages of the German heavy artillery, the German historian H. Ritter noted: “In World War I, the material part of the heavy artillery was exemplary. Its large number at the beginning of the war gave the edge in decisive battles and was personally the work of Count Schlieffen ”.

Also noteworthy was the Germans' desire for mounted shooting — that is, to heavy field howitzers.

The shortcomings in the matter of underestimating heavy artillery (especially field) by other belligerent armies had to be overcome in the course of hostilities - incurring unjustifiably high losses in the most important operations of world war.

Thus, the Russian army entered the war with an insufficient number of heavy artillery guns - which contrasted sharply with the situation in the ranks of the enemy. As General A. Lukomsky recalled: “In addition to the lack of projectiles for our artillery, which greatly influenced the morale of the fighters, we met with large-caliber artillery from the enemy in field battles, which further worsened the situation. There was a new need - to urgently give the field army large-caliber artillery, which could equalize our chances with the chances of the enemy and would enable us to ensure the future success of the struggle for fortified positions.

Another eyewitness recalled: “I remember very well that joy, almost the delight with which in the first battles in East Prussia the heavy division approached. In one of the army corps in response to complaints from commanders of field light batteries that the enemy literally falls asleep with their heavy shells, while they are powerless to fight enemy heavy batteries that are beyond the reach of our 3-inch guns, the Corps artillery inspector gave advice to push our light batteries so that the shells of these batteries could hit the enemy’s heavy batteries. Of course, none of the light battery commanders followed this advice, but some of them noticed with irritation that for this they would have to choose positions ahead of their infantry. There is no doubt that the presence of heavy batteries in our country always enhanced the spirit of the troops, whereas their absence acted on the troops in the opposite sense. ”

A miscalculation was the lack of integration of the available heavy artillery units into the structure of field troops.

These omissions, as noted, were characteristic not only of the Russian army.

And they were overcome.

During the war, the number of heavy artillery increased many times, and its structure had 2 heavy artillery regiments, more than 100 heavy artillery divisions (72 individual, 5 Siberian, etc.), siege artillery brigades and regiments, tractor heavy divisions, and also mass separate heavy and heavy position batteries. And in the summer of 1917, the roar of the guns of powerful Russian artillery leveled enemy fortifications. But the imperial infantry, hardened in the battles of the three campaigns, the infantry, which would have fully captured the success of an unprecedented demonstration of firepower, was no longer there. The protester and the democratizing army refused to fight.

The formation and saturation of the new material part was proceeding at full speed and gaining momentum - and when, by the beginning of the 1917 campaign, the Russian Acting had, finally, powerful heavy artillery, and the spring-summer offensive of the Allies on the Entente Austro-Germans were afraid as fire - the enemies internal and external piled our state and plunged it into the abyss of chaos. The mythical “freedoms” turned out to be more important than victory in a world war — and the entire subsequent history took revenge on the Russian people for lack of endurance on the threshold of Victory. Victory - the most important factor in which became the powerful heavy artillery of the Russian Imperial Army, which passed through the hearth of an unprecedented war.

Ctrl Enter
Noticed oshЫbku Highlight text and press. Ctrl + Enter
We are
The weekly summary of 2-8 December about the military and social situation in the DNR and the LC from the military men "Mag"Misadventures and problems of Indian artillery
86 comments
Information
Dear reader, to leave comments on the publication, you must to register.