The Fire Hammer of the Third Rome. Part of 2

January 10 2018
17
What were the most important of the heavy field artillery guns?


The 107-mm gun of the Schneider system of the 1910 model had a flat fire trajectory and a powerful high-explosive projectile. The gun was very long-range - effectively proving itself where the use of other types of guns was of little prospect. The use of this weapon was allowed: a high-explosive projectile (grenade) - on important (and remote), mostly vertical, targets (railway stations, observation posts, reserves and headquarters), on enemy long-range artillery (counter-battery combat); shrapnel - for shelling of tethered aerostats, for hitting remote large open living targets (military columns, etc.).

The last task was most relevant during rearguard battles - when the long-range 107-mm cannon fired on the avant-garde units of the advancing enemy. Thus, the 2 th battery of the Life Guard heavy artillery battalion in 22 - 23 battles in July 1915 in the Vlodavka direction repulsed several powerful enemy attacks, giving the combat stability to the infantry that had switched to a successful counterattack (see Second heavy).

Howitzers were used as a high-explosive projectile, and shrapnel.

The 305-mm howitzer of the Obukhovsky plant of the 1915 type was the pinnacle of the artillery pyramid of the Russian army. 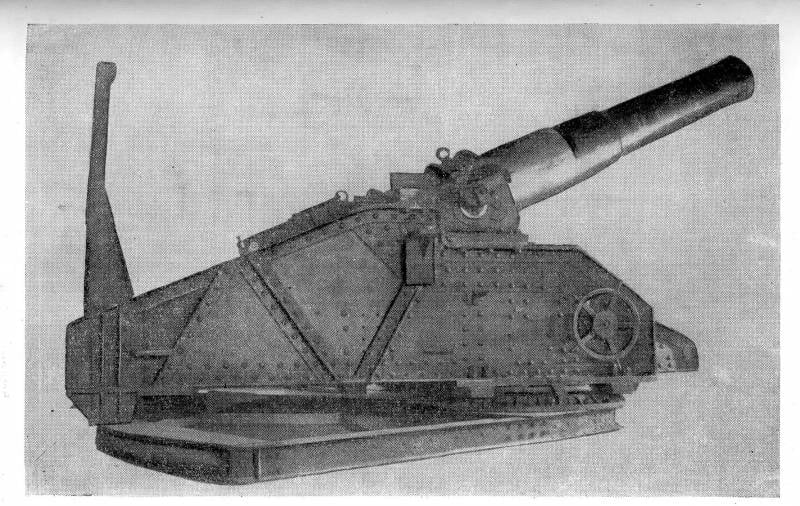 The howitzer was designed by the Obukhov and Petrograd metal plants, and fired at the 13,5-km distance 372-kg projectile. A shell pierced a concrete slab with a thickness of 3,4 meter. The gun belonged to the systems of long range and "great power" (howitzer classmate of the Vickers system with the same caliber fired only at 9 km).

Now worth a look at historical the development of Russian heavy artillery by the beginning of the XNUMXth century, as well as the evolution of its structure.

The first experience of giving the Russian troops heavy artillery in harnesses refers to 1898 - 1899. - it took place on large maneuvers of the Kiev Military District troops, which at that time was commanded by General M. I. Dragomirov.

The Kiev siege battalion under the command of Colonel A.V. Shokoli formed a platoon of 8-inch light mortars, placed on "hard" gun carriages. The wagons with platforms and ammunition were harnessed by "civilian" horses - the siege battalion did not have "its own". This experience showed the possibility of moving heavy artillery system on country roads and even (for a short distance) on plowing. The maneuvers ended with live firing with the attack of fortified positions. In accordance with the requirements of that time, the artillery, after conducting a fire preparation of the attack of the infantry, changed its position, which was then exclusively open. But the heavy artillery of that time could not change positions.

The next episode, when the heavy artillery was attached to the field forces, occurred in 1903 on the Rembertow training ground near Warsaw. Colonel J.F. Karpov (later the commander of the new-George Orland Artillery) commanded the guards, which were taken from the Warsaw Fortress Artillery (with special wooden platforms), while the Life Guards 3 Artillery Brigade provided their teams. At the same time, a device called "shoes" was tested - it was put on the wheels to reduce the "bindability" in the ground.

In the Russo-Japanese War in the areas of art. Dashichao, under Liaoyan and Mukden acted East-Siberian Siege Artillery Division (formed in the Kiev Military District), which was given the battery, isolated from the Vladivostok Fortress artillery, as well as transferred from the Warsaw Fortress.

Then for the first time the Russian heavy artillery practiced shooting at an invisible target.

In 1906, Siege Artillery Divisions were formed. Composition - three batteries: two 42-linear and one 6-inch. They were given a communications unit and a searchlight unit.

At the beginning of World War I, the Russian army had only 5 siege artillery battalions (107-mm cannon and 152-mm howitzer). And then, in the course of the war, their number tripled (including the 2 Siberian, besides the number ones), becoming the basis for siege artillery brigades.

The Russian and French armies entered the First World War, clearly underestimating the role and importance of heavy artillery - the first had 240, and the second - 308 heavy guns. Make up for missed already in the course of a heavy war.

With the beginning of the war, the commanders of armies and fronts threw the Stavka with requests for the addition of heavy artillery. The Main Artillery Directorate was at first lost, and then remembered the existence of serf artillery - which could give the guns until domestic plants could cope with the corresponding task and the guns from the allies arrived.

What fortresses could give guns? Onshore: Kronstadt, Sveaborg, Sevastopol, Libava, Vladivostok - they themselves were armed and had to support the fleet. Land: Novogeorgievsk, Brest-Litovsk, Osovets, Kovno, Grodno - were to become the basis of the defensive line of the Austro-German front. In the Caucasus there were Kars, Akhaltsykh (fortification), Akhalkalaki (fortification), in part - Batum. But these fortresses and strongholds, with a small number of troops on the Caucasian front, were to be in constant readiness, supporting the Caucasian army. Privisly fortresses - Warsaw and Ivangorod - despite the fact that they were at the stage of reorganization, did their job. Dali guns of the fortress artillery. Warsaw was the first to give 12 guns - a heavy division was formed, named: "Warsaw". In the middle of October, 1914 and the Vyborg fortress artillery sent 12 guns to Warsaw, from which the Vyborg heavy division was formed. Novogeorgievsk also selected 12 guns to form the same division. Novogeorgievsky heavy division participated in the siege of Przemysl. 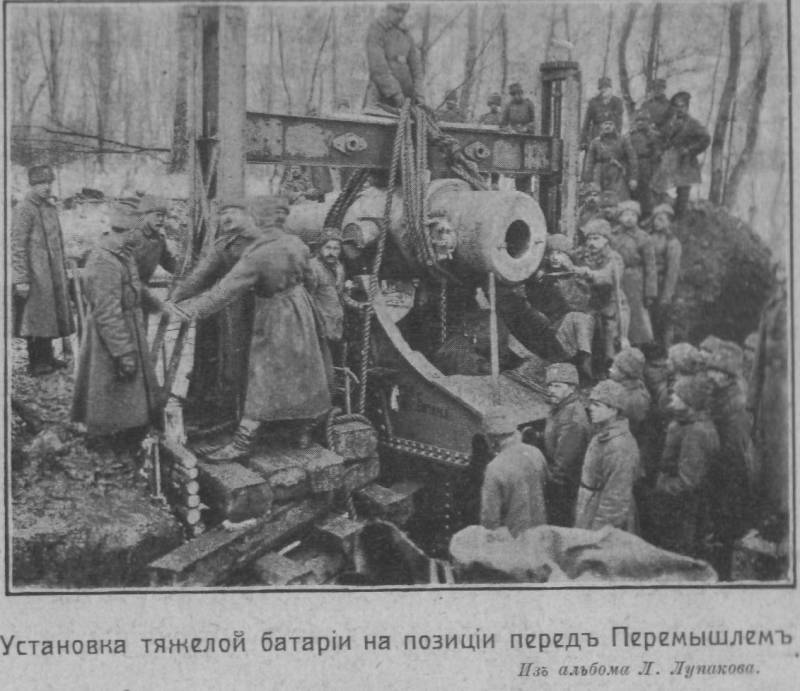 Although the formation of serf divisions continued (the 4 of Brest-Litovsk was being formed, the 2 of the Ivangorod heavy artillery division, etc.) was not enough, of course.

It was the needs of the front, if not in the divisional, then at least corps heavy artillery that led to the creation of heavy (in the cropped 5 of such divisions were at the beginning of the war) 3-battery artillery divisions. Two batteries were howitzer (152-mm) and one gun battery (107-mm). Each battery contains 4 guns. During the war, the number of numbered heavy battalions steadily increased. In 1915, the Life Guards Heavy Artillery Division was formed.

The first of the formed heavy divisions acted on the Bzura and Ravka rivers in the autumn and winter of 1914. Their appearance at the front caused great joy in the troops. Gunners with honor passed the first test. An eyewitness recalled: “the young staff-captain Boris Klyucharev of the Warsaw Division brought the 42-x linear gun to the infantry trenches at night, and when it dawned a bit - opened fire on German machine-gun nests (on Bzura) that hit our positions. Nests were completely destroyed. Of course, the Germans later answered too. But this weapon was not damaged and the next night he brought it unscathed. ”

An officer of the Caucasian Grenadier Division, K. Popov, wrote about the bottom of November 22, that “our artillery, supported by unknown heavy artillery, smashed all German attempts to stick its head out. Artillery fire was so strong and successful that the Germans left their trenches and fled. ” [Popov K. Memoirs of the Caucasian Grenadier 1914-1920. M., 2007. C. 47].

The experience of the formation of heavy divisions and the great importance of the fact of their appearance at the front indicated to the Chief Artillery Directorate the need to give these formations a coherent system. And in 1915, the Spare Heavy Artillery Brigade was established in Tsarskoye Selo and was headed by Academician-artilleryman NI Fonshtein. The work of this brigade under the able guidance of N. I. Fonshtein gave the Russian army organizationally slim and numerous heavy artillery. 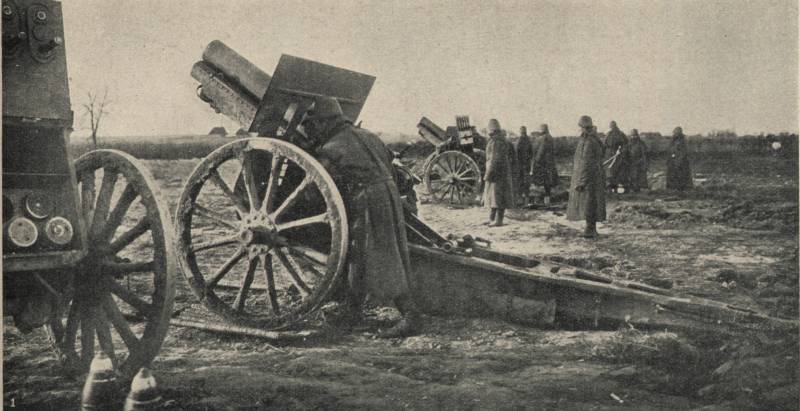 Heavy battery in position. Pictures of war. M., 1917. From the author's library

Ctrl Enter
Noticed oshЫbku Highlight text and press. Ctrl + Enter
We are
September 2 celebrates Russian Guard DayReports from the militia of New Russia for 7 September 2014 of the year
17 comments
Information
Dear reader, to leave comments on the publication, you must to register.