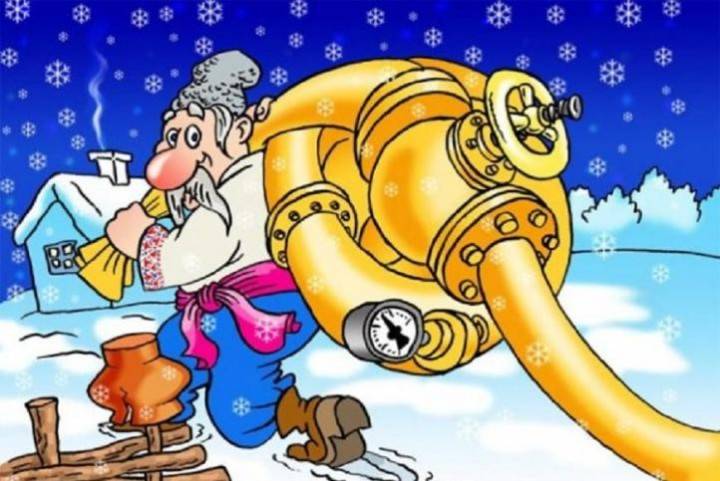 Since Karl Marx died, classical capitalism and the laws of a market economy have changed "slightly". Today, surplus value is often defined in a poorly measured political gain.

Before the first Maidan coup, with Ukraine everything was fine with gas. Often and thickly, she simply did not pay for it, even those pennies that gas cost for the "brotherly people" then. In the 2005 year, the Kuchma officials had not yet had time to leave their posts, they managed to sign an 10-year contract to supply Ukraine with gas at a fixed price of 50 dollars per thousand cubic meters. And you could buy 50-60 billion cubic meters annually. On one resale of surplus in the EU, the country could earn tens of billions of dollars.

Instead, Yushchenko demanded (together with Yulia Tymoshenko) to switch over to the European market pricing system in three years. After a series of "clashes" with the EU disconnecting from gas by a decision of the district court (!) Of the city of Kiev, in January 2009, Prime Minister Tymoshenko concluded an extremely lucrative contract for her personally. In preparation for becoming president, she achieved from Russia a twofold price reduction for 2009 a year (and an 20-percent discount for 2010-th), an advance payment for gas transit up to the 2-th quarter of 2010. And (a bonus in karma) tacit consent to the absolutely illegal selection of gas from Firtash. In order to postpone the appeal to the European court and return the money (or gas) after the presidential elections in 2010 (Russia fulfilled the contract, the money was returned under Yanukovych).

Unfortunately, no gas and financial gifts from Yulia Tymoshenko personally ensured her victory in the elections. Contrary to its agreements with the Kremlin, the people of Ukraine chose Yanukovich on their heads. With all that it implies. The new agreement with all additions (including the “Kharkiv agreements”) carried completely non-market principles due to compensation of the very billions that Julia received for her election campaign 2009-2010 of the year.

Today, it makes no sense to remember that if it were not for the Maidan, Ukraine, up to 2016, would receive gas at 50 dollars — the policy turned out to be above profit. And it was precisely politicking that forced Kiev to impose sanctions against Russia, to start purchasing Russian gas in the EU, in addition to every thousand cubic meters, paying extra for connection to the Euro-gas system and the additional transit of 40-50 dollars. Almost on 20-25% increasing the cost of purchased gas for itself.

The trouble (for the Kiev regime) is that non-market conditions for concluding contracts, additions to them and all subsequent claims to the EU courts, as well as Kiev’s unilateral decisions on unilateral increase in gas transit prices from Russia to the EU, predetermine the final loss of any claim in the courts of the European Union.

Loss is simply due to the fact that within the EU the courts are forced to follow market-oriented laws - otherwise the EU would have collapsed long ago. And for the sake of Poroshenko, in Berlin, Paris et cetera, which is already not very popular, no one will break the judicial system.

The first major loss is the decision of the Stockholm arbitration. Expectedly removing all non-market layers, the court made a fair decision - Kiev is obliged to buy 5 billion cubic meters of gas annually in Russia according to the “take or pay” principle. The same principle, by the way, between Lithuania and Norway - Lithuania is compelled to pay for LNG gas not even purchased in Norway. In addition, the price of gas is determined by the prices at the gas hub of the NCG in Germany, and for the already delivered but unpaid gas, Kiev will have to pay Moscow $ 2 billion with a little. Plus for 600 thousands of dollars for every day overdue after December 22. 4,2 million on top already "dripped."

Considering that Naftogaz’s annual profit is at least half as much as the amount to be recovered, Kiev continues to draw on rubber, hoping that the European court will deliver a verdict on the gas transit case that is advantageous to Naftogaz.

In transit, we have an attacking position, we must pay real money. We demand from $ 6,5 to $ 16 billion, and we expect our requirements to be met in this range.
- said the representative of "Naftogaz".

Unfortunately, this "attacking position" is executed through one, all known, place. Kiev unilaterally revised the price of gas transit through its territory, raising it higher than any existing in the EU. Given that there is no practice in the EU to unilaterally revise the prices of contracts, there is one more sad truth for Kiev. Such a price increase will fall entirely on consumers in the EU, as there is a "force majeure" (one-way solution). Take the court side of Kiev, in the EU will increase the cost of purchased fuel. "And they need it?".

As a result, the delay in payments will lead to the fact that the amounts will increase and you will have to pay a lot more. In addition, the final, uncontroversial, decision of the High Court of London on the payment of Kiev debts on Eurobonds, which secured a 2013 loan in December 3, is approaching. There the situation is completely hopeless - the deal through the Irish stock exchange is indisputable, you will have to pay with penalty, fines and legal costs - up to 4 will run billions of dollars.

If we add to this the fact that recently the gas that was being re-exported to Ukraine was arrested at the suit of Slovakia, the situation is absolutely awful. After all, these are no longer Russian claims, Kiev is indebted to the Italian company IUGas. All of these lawsuits and courts (plus accidents on European gas pipelines, of which there were three recently, including an explosion in Austria, an accident on the British gas pipeline and the Norwegian offshore platform), convince the European partners of Gazprom that it’s better not to only "Nord Stream - 2", but all the others, bypassing Ukraine, projects.

Pragmatists live and work in the European Union. Politicians only realize their leverage for the sake of the greatest possible profit of just these pragmatists. The EU is not the American “Proekt UKRAINA”, where politics is replaced by politicking, but the capitalist's pragmatism is the unbridled corruption of the oligarch official. Europragmatists insured and built LNG terminals throughout the European Union - and they already accept both Russian, Qatari and even American (most expensive) liquefied gas. Yes, it is more expensive than the Russian pipeline, but this is insurance. Until they launch direct gas pipelines, without abnormal intermediaries.

By the way, this is exactly what the pragmatists in the United States are afraid of, just like in the European Union. The United States is far, the cost of goods and raw materials of its own production they will always be higher than that of Russia, China and the union built by these countries. If you do not break everything in the bud, if "Proekt UKRAINA" collapses (and it is already collapsing), the EU will benefit from dealing with Russia and China. And the land route from Beijing to Lisbon, including the ruins of Ukraine (or even bypassing it), turns the USA into a very militarized, but very distant "island" state. 10 or 11 whose carrier fleets do not scare anyone, because between the EU, Russia and China, as well as through Eurasia in general, no routes to this squadron will ever be laid. And who then needs the USA, if practically all solvent consumers and more than 70 percent of natural resources are located right here?

This is the real reason for the unprecedented US pressure on Russia, on the European Union, and on the performers of "Proekt UKRAINA" itself.

Ctrl Enter
Noticed oshЫbku Highlight text and press. Ctrl + Enter
We are
The 20 rating of the largest arms deals, decisions on which were made in 2012Companion Yanukovych proposes to judge Yushchenko for fraud with the supply of arms to Georgia
Military Reviewin Yandex News
Military Reviewin Google News
25 comments
Information
Dear reader, to leave comments on the publication, you must to register.