December 29 2017
2
In early August, 1914, the Kingdom of Belgium was drawn into World War I. Just a few days after that, the Belgian military and engineers began building the first armored cars. For several months, the Belgian army received a significant number of such equipment of a number of models of its own design. In addition, some cars were ordered abroad. Not the most numerous, but interesting examples of this kind were Mors combat vehicles.


The first Belgian armored cars were created in August 1914, and in September took to the battlefield. Several automotive companies and a number of army units were involved in the work in this direction. In the shortest possible time we managed to build several dozen armored cars, but the army needed new and new vehicles. The loss of several cities together with automobile plants hit the possibilities of the Belgian industry. In this situation, the country was forced to seek help from the allies. 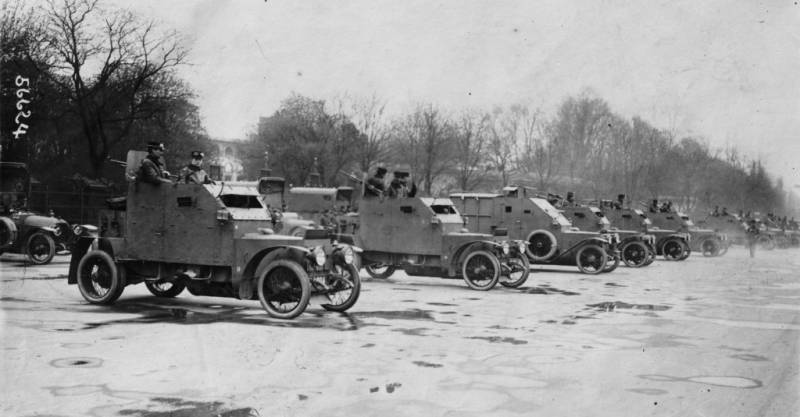 At the beginning of 1915, the Belgian military ministry asked France for assistance in building armored combat vehicles. Belgium wanted to purchase a number of ready-made serial armored cars, and also intended to order the development and construction of a completely new car. The latter was to be designed in accordance with the requirements of the customer.

Soon a contract appeared between the Belgian army and the French carmaker Mors. In accordance with this document, French specialists had to develop a new armored car with anti-bullet protection and machine-gun armament. One of the existing Mors chassis should have been used as a basis for it. The Belgians also made demands on the armored hull of the new car. He had to repeat to some extent the design of their own Belgian armored vehicles, such as Minerva or SAVA. 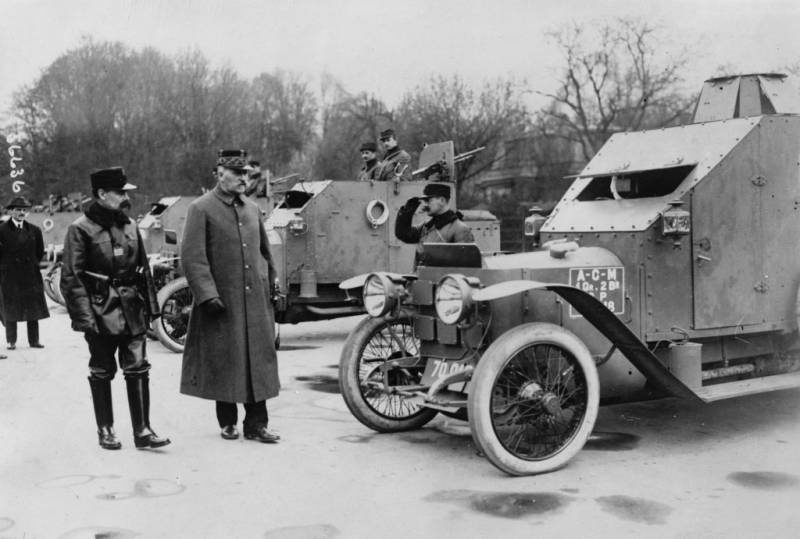 Demonstration of technology to command

A simple and proven approach to design allowed to perform all the necessary work in the shortest possible time. Just a few months after receiving the order, Mors completed all the work and handed over the required machines to the Belgian military. However, the design and construction could not last for a long time, since the series consisted of only a dozen cars. French-designed armored cars were given the general name of the manufacturer - Mors.

According to reports, the base for the new armored vehicles was to be one of the French-made serial chassis. However, it should be finalized. So, the staff engine was proposed to be replaced by a Belgian-made Minerva motor. Such a power plant developed a power of the order of 38-40 HP With the help of a mechanical transmission, previously created by French engineers, torque was given to the rear driving axle. The front axle of the car was equipped with controlled single wheels, while the rear axle got a gable. Both bridges had suspension on leaf springs. The base car, along with other parts borrowed wings for the wheels. 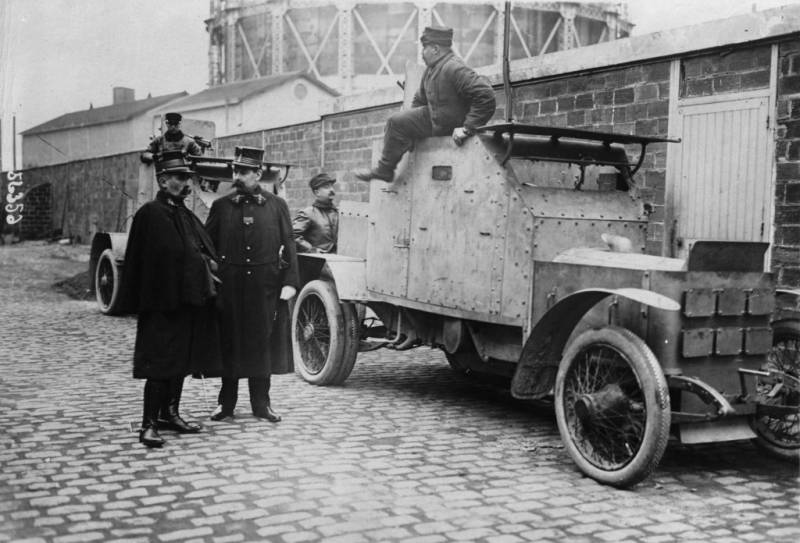 Couple "Morsov" at the factory

On the chassis it was planned to install an armored hull built on the basis of the frame. With the help of rivets on the frame should have been installed armor plates of different shapes and sizes. Crew protection should have been provided by metal sheets with a thickness from 3 to 8 mm. The thickest sheets, apparently, were installed in the front and aft parts of the hull. The sides, bottom and roof could be made of less thick armor. Taking into account the existing combat experience, the Belgians demanded that the hull be closed and protect the crew from shelling from above.

The body was built on the hood scheme, protecting the engine box-hood. The frontal projection was covered with a rectangular sheet, the sides of which were bent back. In the frontal sheet there were six small windows, in front of which were small guards. This design was to ensure the supply of air to the radiator and at the same time protect it from shelling. Rectangular sides contacted the frontal part. From above, the engine was covered with a flat cover, which could be raised to access the engine. According to some information, the regular light hood of the Mors car remained under the armor cover. 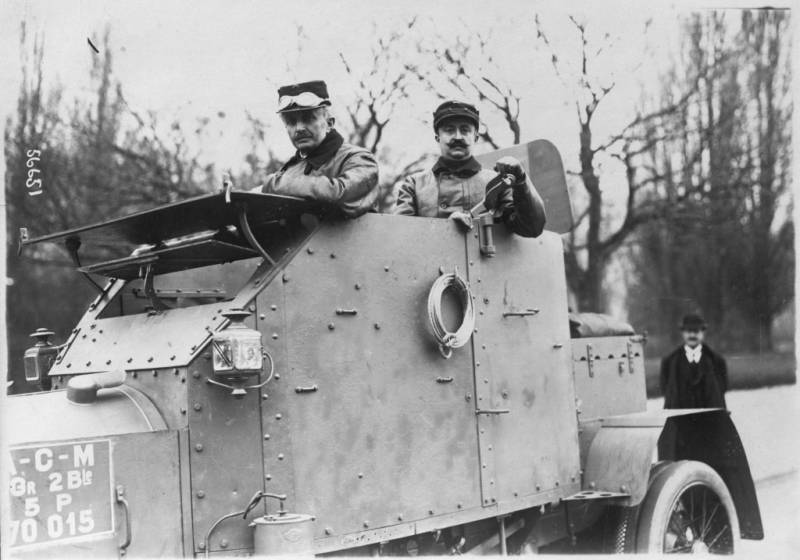 Instead of a full roof, a hatch flap was used.

The front part of the habitable housing compartment received a relatively narrow lower frontal sheet, with which the inclined upper part was connected. Polygonal sides should be set at an angle to the longitudinal axis, and therefore the width of the body gradually increased. The hull also received a pair of large vertical side plates, behind which was a cylindrical feed detail. On top of the case was mounted a movable cover of the conventional control compartment.

The rear part of the chassis frame protruded in a noticeable way beyond the body, and it was equipped with its own protection. The box-shaped armor cover covered the power elements of the machine, and its cover served as a small cargo area.

Armored car Mors, in accordance with the wishes of the customer, had to carry machine guns. In the stern of the hull, on the cylindrical part and in front of it, an annular guide was fixed for the mobile machine gun installation. According to other sources, a thumbnail unit could be in the fighting compartment. With the help of such a device, the shooter could freely move the machine gun, as well as carry out a thin pickup in two planes due to its mounts. For the safety of the machine gunner, the installation was supplemented with a medium-sized armored shield. He provided reasonable shooter protection, but did not interfere with the review. 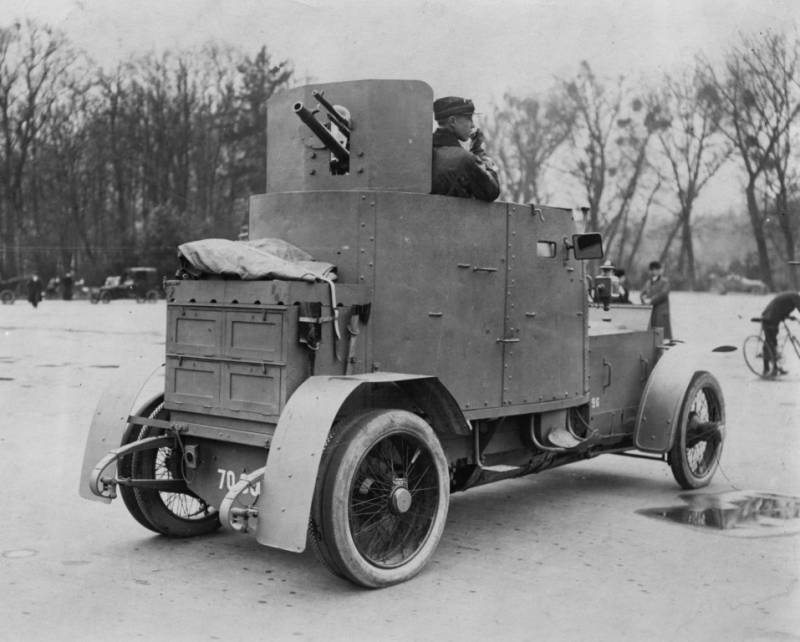 View of the stern

Like other armored cars of Belgium, the new Mors was to be equipped with a French-made Hotchkiss Modèle 8 1909-mm machine gun. The machine gun with a rate of fire at the level of 500 rounds per minute used rigid tape cassettes for cartridges. For transportation of large amounts of ammunition inside the crew compartment were boxes.

If necessary, the crew could use personal weaponhowever, its use was associated with certain risks. For firing pistols or rifles would have to open the hatches and leave the protected volume of the hull.

The crew of the Mors armored car was to consist of three or four people. The driver and commander were located in front of the habitable compartment. The shooter and his assistant should be in the stern, next to the machine gun installation. The commander and driver could follow the road with a large transverse rectangular viewing hatch. In combat, he was covered by a rising lid with a viewing slot. To the left of the driver, there was another slit-type viewing device on board. Along the perimeter of the hull there were several other slots for safe observation of the terrain. 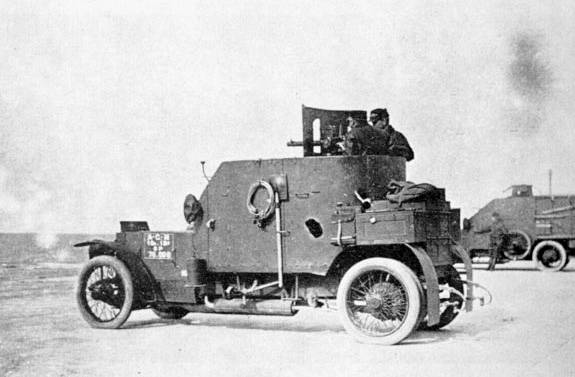 The project did not include the use of side or stern hatches. Get into the car offered through the top of the case. The front part of the small roof, which was located above the conventional control compartment, was made in the form of a movable sash. Having thrown such a cover forward, the driver and the commander could get into the car or get out of it. In a combat situation, this hatch was closed. Machine gunners had to get into the machine through the sides of the stern - through some kind of hatch, formed by the annular support of the machine-gun installation.

The length of the armored car "Mors" did not exceed 4,5-5 m. The width was about 2 m, the height was no more than 2,5 m. The combat weight, according to known data, was 3,5 t. Having a sufficiently high specific power, the car could accelerate on the highway to 35- 40 km / h. On rough terrain, the driving performance of the car fell noticeably. However, in terms of mobility, the French armored car for Belgium almost did not differ from other vehicles of its time. 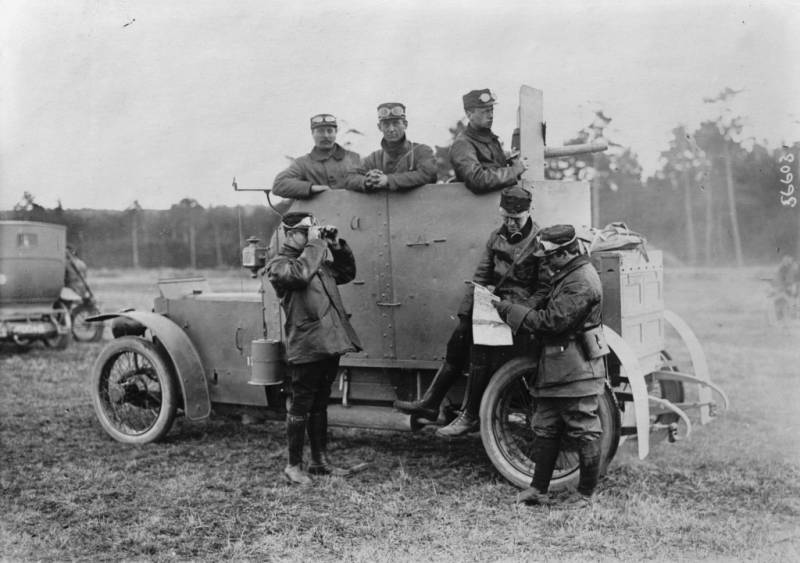 In the first months of 1915, Mors fulfilled a foreign order and built a small series of new technology. According to various sources, no more than 8-10 armored vehicles with machine guns were assembled. Soon the cars were handed over to the customer and went to war. Like other armored cars, the new Morsy had to solve the tasks of fire support for troops, reconnaissance, patrolling, etc.

As exploitation proceeded, Mors armored cars occasionally received various damages or failed. Machines to be restored, were repaired in military workshops. However, some armored cars significantly changed their appearance. They lost some parts and got others. For example, it is known that some of the machines have lost some kind of roof, while others have equipped with new original shield for the machine gun and other details.

Working on the German front, Mors armored cars gradually disappeared from the scene. The war went into a positional deadlock stage, and armored cars of all types were less and less used on the battlefield. For a long time, "Morsy" and other combat vehicles were exploited sporadically and did not have a noticeable effect on the course of hostilities. 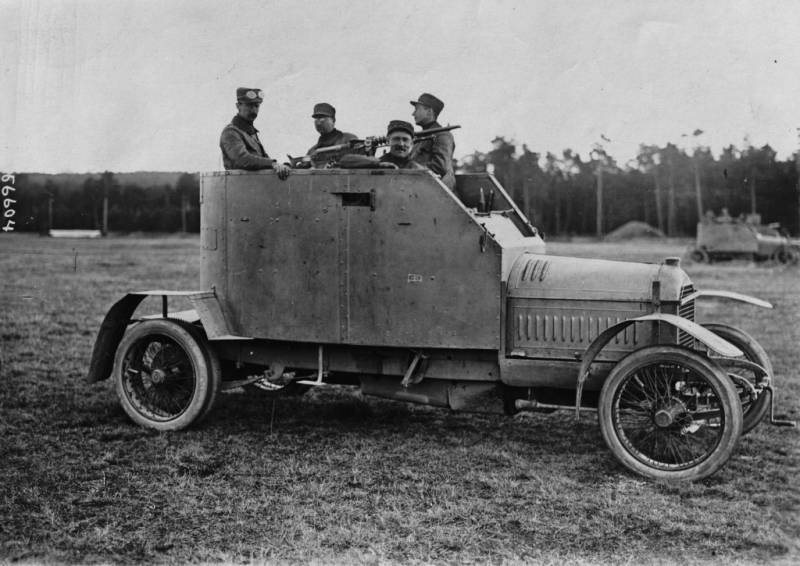 An example of field "modernization" of armored cars. The machine has lost the front sheet of the hull and shield machine-gun

In the spring of 1915, Belgium began to form the Expeditionary Force to assist the allies. Several hundred Belgian volunteers, while in Paris, joined the new compound called Corps des Autos-Canons-Mitrailleuses Belges en Russie, led by Major Collon. The Belgian authorities sent a new building to the Russian Empire. In mid-autumn, the compound arrived in Arkhangelsk, from where it later went to Galicia. The personnel had 13 armored vehicles of several types, among which there were at least two Mors vehicles.

The Belgian volunteer corps for a long time acted as part of the Russian army and contributed to the fight against Germany and Austria-Hungary. There were both successes and losses. The compound continued to fight until the 1917 year. The next few months, the Belgians were waiting to go home.

In January, 1918, Corps des Autos-Canons-Mitrailleuses, at that time in Kiev, went to the Far East. From Vladivostok through China and the United States, the Belgians returned to their homeland. Unable to take the vehicle with them, the corps fighters were forced to disassemble it. Before leaving Kiev, the soldiers and officers dismantled the existing armored cars. There is information about the disassembly of at least one of the cars of the type Mors. 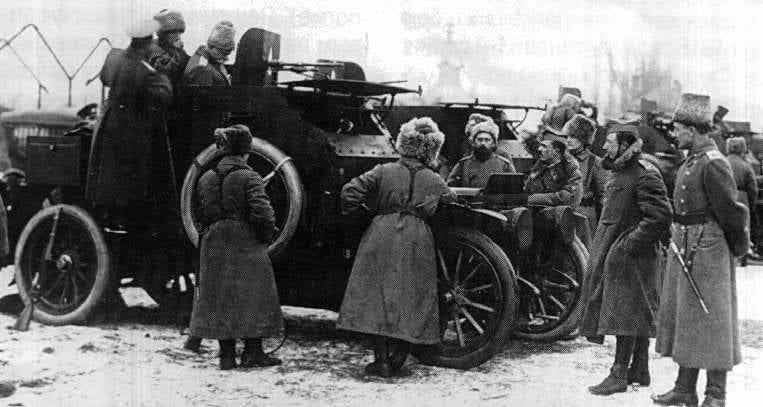 The exact fate of the other armored vehicles is unknown. There is reason to believe that a certain part of this vehicle was destroyed during the battles with the Germans or Austrians. One or more cars were dismantled and left in Russia. Other armored cars had every chance to "live" until the end of the battles of the First World War. However, their future has already been predetermined. Under the new conditions, Belgium did not need a large number of armored cars. In addition, a significant proportion of cars managed to work out their share.

Within a few years after the end of the First World War, all remaining Mors armored vehicles in stock were to go for disassembly. Given the state of this technology after several years of combat work, it can be assumed that the restructuring of the chassis into civilian or other vehicles was not envisaged.

Needing modern armored vehicles capable of increasing the combat capability of the troops, the Kingdom of Belgium was forced to order new cars abroad. The contracts included both the purchase of finished samples and the development of completely new projects. A good example of the second approach was the armored car "Morse". A few cars of this type have left a significant mark in stories Belgian armed forces, although they did not have a serious impact on the course of the fighting.