December 29 2017
8
Watching the speeches of our American experts in various programs, you understand that you don’t understand something. The US policy on Russia and China with the announcement of their “revisionist countries”, they explain the new large-scale anti-Russian sanctions, unpredictable and destabilizing policies of the United States around the world, in general, by the fact that Washington’s “roof” went to the local elites. The White House with Trump, the State Department, the Pentagon, the CIA, the "Republicans", the "Democrats" and the "neocons" quarreled and waved their arms in different directions, trying to maintain world domination, and create chaos. 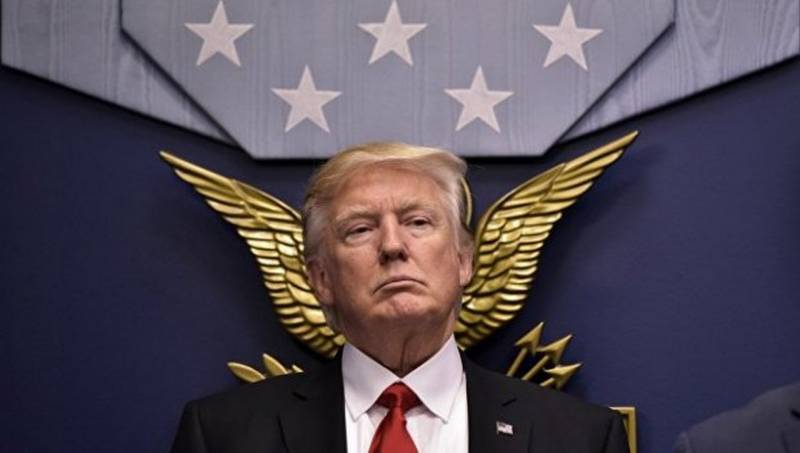 This conclusion seems to be confirmed by the fact that even with its closest allies, except Canada, the United States had serious problems, from the Philippines and Turkey to Europe. Particularly indicative are the contradictions of the United States with Europe, whose policy, for the most part, determines today, after England’s exit from England, Germany.

And their contradictions with Europe in Washington, following the long tradition of big lies in politics, are attributed to the “subversive activities of Russia” in Europe: US officials are making statements about this, not the tabloid press. As evidence, non-pro-American commentaries on social networks are cited, all attributed to the “Russian propaganda” and “Putin’s friends”, and the broadcasting of the Russian media proper, since they do not express the American point of view, the only correct one.

Does the United States really conduct a logicless foreign policy in the world? Do not understand the consequences of their actions, as our official experts constantly say about this?

The officially declared goal of the United States in Europe is to thwart the construction of the Russian-German gas “Nord Stream - 2”, which Germany continues to insist on and, we note, does not make statements about the suspension of this project, despite the fact that it actually fell under anti-Russian sanctions by the US Congress. After the announcement of these sanctions, the United States resumed a policy of escalation of tensions in Ukraine, up to the resumption of the war in the Donbas, with Russia being drawn into it. This is another attempt by the United States to disrupt the construction of the joint venture - 2, indirectly, by strengthening the general confrontation between the European Union and Russia.

The mission of the US Special Representative for Ukraine Kurt Volcker was to destabilize the situation in the Donbas by introducing "peacekeepers" into his territory according to the Yugoslav scenario, with a massacre of the type of Srebrenica, to which Russia could not but respond. This scenario was easily calculated, and Russia blocked it, Putin himself said that he was leading to Srebrenica, the Volker-Surkov summit failed. When the “peacemakers” scenario failed, the State Department and the Pentagon allegedly pushed President Donald Trump to allow the delivery of weapons to Ukraine, including the notorious Javelin anti-tank complexes.

In purely military terms, this American “lethal weapon” in the Donbas will not change anything, it can only provoke the Bandera Nazis to a new adventure in the Donbas, although this is not yet a fact: there are significantly fewer hotheads in Ukraine than in 2014 year. Again, Washington's meaningless move, which only increases tension?

Deliveries of American Javelins to Ukraine are primarily of political importance. They are designed to completely erase, in fact, a separate peace between Russia and the European Union, concluded in Minsk, an important condition of which was to limit the supply of lethal weapons to Ukraine, including from the United States.

Deliveries of “Javelins” close the very topic of entering “peacekeepers” in the Donbass, even to the line of contact between the parties. After this, it is impossible for Russian officers to return to the JCCC under any conditions, due to the threat of a military outbreak, and to take the Russian mission hostage or even kill them to provoke Russia to respond. By the way, the operational withdrawal of Russia from the STsKK says that in Moscow they were expecting an American lethal New Year's "gift."

Thus, the decision to supply the Javelins is politically very sensible: the United States is trying to thwart the entire negotiation process on Donbass, only the Contact Group in Minsk remains, but it is designed to solve humanitarian and technical issues. The breakdown of the Minsk agreements should, in theory, worsen Russia's relations with the European Union and Germany, which will create new obstacles to the construction of the Nord Stream - 2, especially if the war in the Donbas is resumed.

In general, the termination of Europe-Russia relations is a strategic goal of the US state coup in Ukraine, bringing the Bandera Nazis completely unacceptable to Russia to power in Kiev. This is what everyone from non-pro-American analysts say about 2014. But over the past three years, these relations, in spite of all Western sanctions, have not been interrupted; in 2017, the Europe-Russia trade even began to recover! Even Bandera Ukraine's trade with Russia has grown! Therefore, the US is again trying to stir up the war in Ukraine.

It is said that militarily, after Russia demonstrates its military capabilities in Syria, this is supposedly meaningless, Russia will repeat in some form the “Georgian scenario” 2008 of the year in Ukraine. But it is also included in the plans of the United States, because their main goal is not a victory for Bandera in the Donbas and the restoration of the “territorial integrity of Ukraine”, as they lie, they will be satisfied with the complete disaster of Bandera’s Ukraine, with the spread of civil war throughout its territory - then Russia will be reliably cut off from the European Union. Then there will be not only the joint venture - 2, but also the current joint venture - 1 will be in doubt.

In Donbas, the fate of not only Ukraine, but the whole of Europe is decided. In the Obama presidency, the American elites adhered to a “democratic strategy” of dominance in the world, taking into account to some extent the interests of their closest allies, therefore American sanctions against Russia, although they struck Europe and Germany, did not close the main arteries connecting Europe with Russia. Obama did not enter the "Norman format", but did not speak out against him and, albeit formally, he supported the Minsk agreements. I remember that Senator McCain and his friends were very unhappy about it.

President Donald Trump cannot abandon Obama's legacy in the form of the Minsk agreements, but his special representative and the State Department Kurt Volker, in fact, torpedoes them. Volker - “not a negotiator, but an instigator of the war in the Donbass” - that was how our political elite qualified him.

After Trump's party members, led by McCain, beat off "Russian love" from him, Washington adopted, it may be said, the republican strategy of hegemony in the world, which is entirely consistent with the Trumpian motto "America First" and at the expense of all the others. Including their allies, not paying the required Atlantic tribute.

Deliveries of the Javelins Bandera have the ultimate goal of a new military outbreak in the Donbass leading to the complete obedience of the United States of the European Union and Germany. In Germany, they understand this, they remember that Trump called the Germans “very bad”, and they think what to do: Angela Merkel cannot form her new government.

Ctrl Enter
Noticed oshЫbku Highlight text and press. Ctrl + Enter
We are
Results of the week. “Look, the whole face is black! Have you ever read Moidodyr? ”Results of the week. "Well, do not change me because of every idiot!"
Military Reviewin Yandex News
Military Reviewin Google News
8 comments
Information
Dear reader, to leave comments on the publication, you must to register.