Americans continue the war in Syria

December 28 2017
15
New Year's Eve days are always quite difficult for politicians and the military. Summing up the year. Report on victories and defeats. It is these days that many unflattering facts come to light. But due to the fact that most of the inhabitants are busy with their own everyday problems, the facts often go unnoticed. So, one passing fact from the daily set. 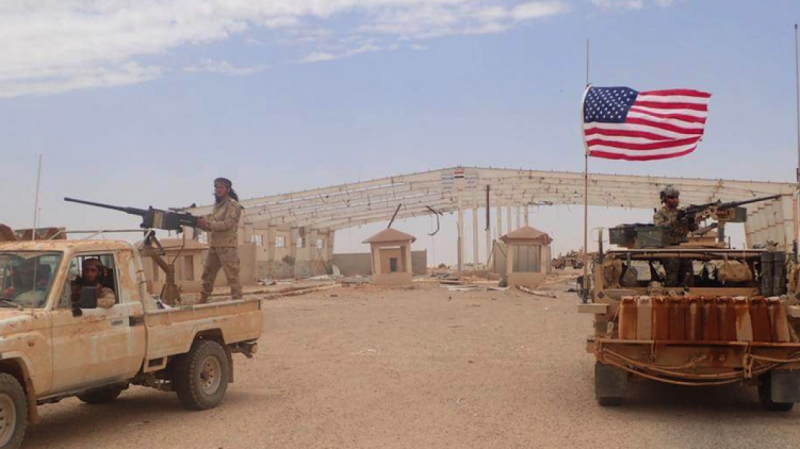 So it may happen now. It all depends on Russian diplomats and the political will of the Russian president. This is a statement by the Chief of the General Staff of the Russian Armed Forces about the training of terrorists by the Americans at US-controlled bases.

Such statements without "reinforced concrete" evidence of the military of this level do not. General Valery Gerasimov referred to intelligence data and information obtained from refugees who escaped from these same bases. Reference is made, in particular, to the base in Al-Tanf (province of Homs) and Shalladi (province of Al-Hasakah).

The United States does not even try to hide it. What for? The fictional and already used by politicians formula of good and bad terrorists works. People with weaponswho oppose the legitimate government of the country, kill civilians, are, are moderate and not moderate.

What does it depend on? From the number of crimes that they committed? Or the number of dead soldiers of the legitimate government? Maybe the number of civilians who were slaughtered like rams, hundreds? No, it depends on the attitude of the terrorists towards America and the Americans. Managed by US Army instructors - moderate. Wanted to live peacefully under the control of the government chosen by him - to be destroyed.

The United States has long been working out the method of training militants. Al-Qaeda has already been harassed (banned in the Russian Federation). Even the Americans themselves recognize their own participation in the creation of this ultra-radical organization. Similarly, today they talk about some gangs in Syria and Iraq. The question arises: why? What do the Americans want?

There is one interesting fact. Base At-Tanf is in a very strategic place. This is actually the border of Syria, Jordan and Iraq. Accordingly, militants defeated in Syria and Iraq from there can be sent directly to the same states. By decision of the command of the US Armed Forces.

Someone, perhaps, will give an identical example of the actions of the Syrian army in relation to the militants. The militants who decided to lay down their arms and stop the war, after checking, go home. Begin a peaceful life. included in political life. Simply put, they get all the rights of an ordinary citizen.

Americans supposedly do the same. The official version, voiced repeatedly by the American side, looks exactly like that. They surrendered and want to return to a peaceful life. And in the camp are only because they pass the necessary checks.

But what have the American military instructors who train the "inspected" every day? Why are the former militants again with arms and united in groups? Why do unknown names of opposition organizations appear? General Gerasimov said this directly: "According to the data of space and other types of reconnaissance, there are militia troops on it. They are actually preparing there."
﻿
The answer is on the surface. Terrorists are treated in exactly the same way as drug dealers with distributed "chemistry". Change the name and add some nonsense. And that's all. Under the criminal article this substance no longer falls. It is not on the list of drugs. The most radical terrorist "disappear." To be reborn under a different name. Consequently, it is possible to report on the destruction of the radical organization and the support of the moderate opposition.

At the beginning of the article, I mentioned the reports of witnesses from among the Syrians who had escaped from the camps. In addition to the Syrian special services, they, of course, are also engaged in our specialists from the Reconciliation Center. It was from there that information was received about why the next "moderates" were being prepared: "According to the refugees who returned to their homes, the American instructors announced that after completing the training course, the formations would be redeployed to the south of Syria to fight the Syrian government forces."

The United States is not going to end the war in the region. American politicians absolutely do not need a peaceful Middle East. Moreover, only the growth of the conflict will provide at least some preservation of American influence. By the way, Trump's statement about the transfer of the embassy to Jerusalem perfectly fits here. The war of all against everyone really needs the USA.

You can, of course, talk about some premature conclusions of the author. But then many questions arise. For example, how should we treat the attempt to fire our air base in Hmeimim? It is great that there are systems capable of destroying enemy missiles. And if they weren't?

More and more often there are thoughts about what else we will have to hear about the work of our VKS in the Syrian sky ...

Ctrl Enter
Noticed oshЫbku Highlight text and press. Ctrl + Enter
We are
Refugees from Syria. Will Russia accept immigrants from the Middle East?Situational analysis of the death of the MH17 flight (Malaysian Boeing 777), made on the basis of engineering analysis from 15.08.2014
15 comments
Information
Dear reader, to leave comments on the publication, you must to register.