Results of the Syrian campaign: Russia is ready for war

Formally, Russia is still not at war with anyone. But this is only from the point of view of the old definition of war. In fact, the war has already been going on for a long time, and the Russian army has already been really fighting for more than one year. But all this is just a preparation for the war that must be avoided by all means.

The 08.08.08 war was the first real test of strength for the Russian army. Then it was still far from the army that came to save Syria from terrorism after seven years. In terms of technical equipment, in terms of staffing structure, in terms of combat and tactical training, these were two completely different armed forces. And different in every sense of the word.

Perhaps, there is not a single army in the world today, except the Russian, which would be so intensively re-equipped with the latest technology. If you look at the procurement of weapons systems of the last decade and procurement plans for the coming years, we will see that by 2025, the Russian armed forces will be completely re-equipped with modern types of military equipment. And some of them will be head and shoulders above the technology of any probable and unbelievable opponent. 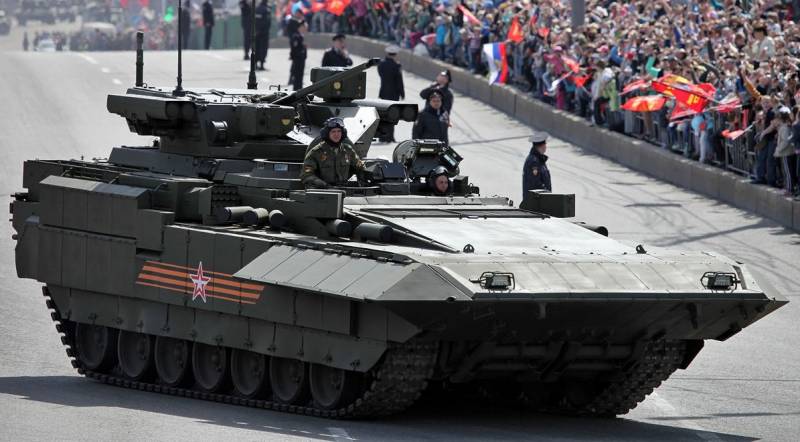 Just one example. The combat platform T-15 (heavy infantry fighting vehicle). She is already entering the army today, and yet few people know that in the United States a technical study of the same machine has long been carried out. The GCV (Ground Combat Vehicle, ground combat vehicle) development program was launched in 2011, but, as it became completely clear in 2015, the American military-industrial complex is not capable of creating such a machine even in the foreseeable future. It was either too heavy (70 tons instead of 60 tons), or did not provide the necessary level of protection. Already in 2016, the Pentagon allocated money for the next modernization of the old Bradley M2 M15, and in November of the same year the first Russian pre-production T-XNUMXs developed on the platform entered Red Square in Moscow tank T-14 Armata ...

It was a real slap in the US military-industrial complex.

Yes, “Almaty” in the Syrian war was not noted, but more than 200 units of other modern and promising Russian military equipment were tested there. In a real war, Russian engineers and the military were able to run in it and eliminate the identified shortcomings. And it is worth a lot.

For a modern army, it is necessary to have advanced military equipment, but this condition is not sufficient to guarantee superiority over the enemy. It is also necessary to master this technique skillfully and to apply it correctly.

How many copies were broken about the reform of the Russian armed forces! In 2000 and the beginning of 2010, the ground forces underwent several reforms when first brigades of one type were created, and then another, but in the end the army stopped at the re-establishment of the divisional structure. Also, the new look will be given to the airborne and the marines. 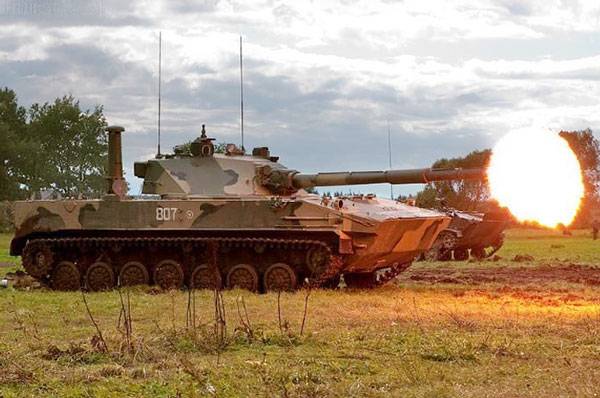 New technology allowed to implement and new tactics. For example, with the launch of the family of combat vehicles based on the BMD-4, the firing and, therefore, tactical capabilities of the Russian highly mobile forces are dramatically expanded. And the adoption of the Kurganets-25 platform will allow the Russian mobile forces to get a car comparable in capabilities with Western non-water and non-airborne combat vehicles. This will immediately make them equal on the battlefield to the so-called heavy NATO units. Or almost equal ...

The new equipment allows the Russian military not only to master modern combat tactics, but also to invent a new one. For example, no one in the world in the near future will have such brigade divisions that could redeploy thousands of kilometers within hours (days) and immediately go into battle far from logistic deployment points (airfields, ports, railway stations). Moreover, these units are armed with the heaviest weaponry today (BM with tank 125 mm guns and 152 mm self-propelled howitzers).

So, there is a technique. There are new tactics and new opportunities for their use. But the troops must also learn to use them.

The exercises in the Russian army in recent years have become commonplace, and their scope and objectives are constantly growing. We take only the current year. 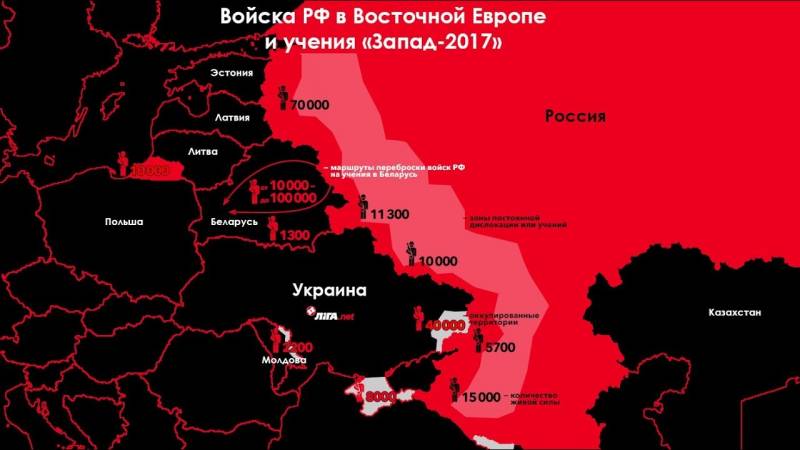 The “Zapad-2017” exercise was essentially a test of the rapid transfer of the Russian 1 tank army to western Belarus, as well as the deployment of the 11 AK (in the Kaliningrad region), the 6 and 20 armies in the western operational sector (these exercises also took part a significant part of the airborne troops). 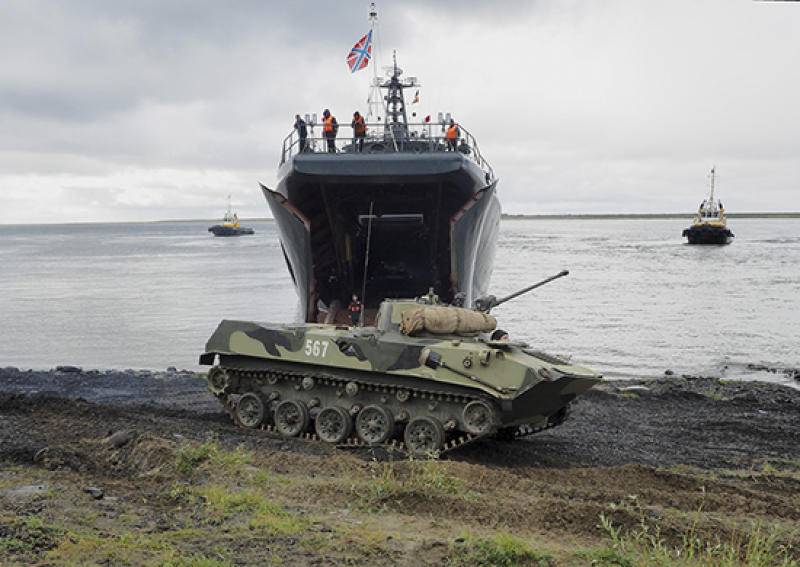 Battle campaign of the ships of the North fleet to the Taimyr Peninsula and landing in the area of ​​motorized rifle units, marine corps and again the Airborne Forces - this is today an unprecedented combined landing operation conducted in addition to the Arctic Circle.

In the meantime, the Syrian campaign allowed for two years to run in a real combat situation 48 thousands of soldiers and officers of the Russian Armed Forces. In fact, the composition of several buildings ...

Understanding the essence of modern war

Technique is. Troops trained in training and hardened in battle. In order for such an armed force to be considered fully combat-ready, it also needs a control system of the same level.

Anyone, even a very good tool, must also be able to use. Nobody paid attention to how, after every big exercise of this or that Russian general, they either began to move up the career ladder, or the person cleaned up for less responsible work, or even went to “well-deserved” rest.

In fact, a very interesting activity today is to trace the career of Russian generals. Highly recommend.

Today they all have real combat experience. As the Chief of the General Staff of the Armed Forces of Russia, General of the Army Valery Gerasimov, said recently, all the commanders of the okrugs with their staffs went on long missions to Syria. 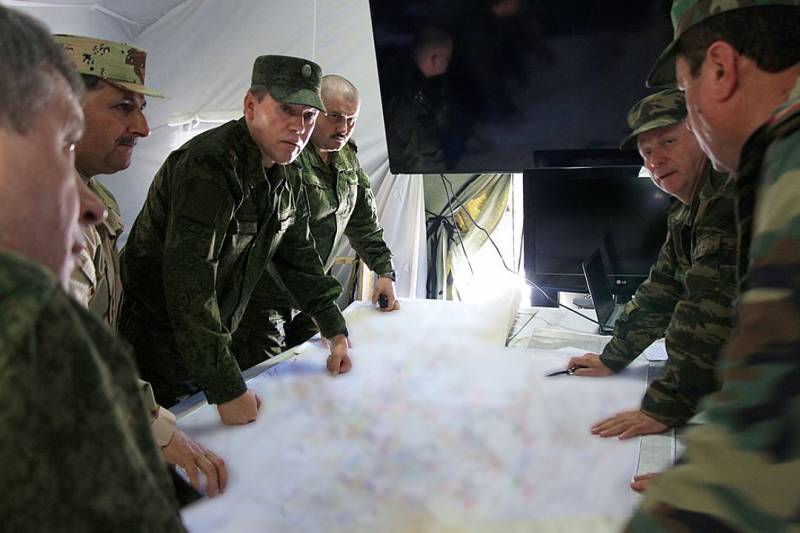 Also, all army commanders (with headquarters), 90% of division commanders, and more than half of the commanders of the regiments and brigades passed through Syria.

How did they show themselves? Let's rate by result. In my opinion, very good. And some of their operations were generally beyond the understanding of their Western "colleagues." And to those who organized and implemented the operation on the offensive of the CAA from Aleppo to the Euphrates, you can generally assign any operation. The troops fought, having an experienced and strong opponent in front of them, in just forty days passed 150-200 km and thus prevented a possible blow to the south of Kurdish "allies", after which the Syrian campaign could be considered lost by the Americans. It was these brilliant operations carried out in 2017, in many respects that decided the outcome of the entire campaign.

So, you can proceed to the conclusions. The reform of the Russian armed forces, although not yet complete, has already achieved many intermediate results. Today, the country has a combat-ready army equipped with modern weapons, soldiers, officers and top commanders of whom have gained combat experience and mastered the latest methods and tactics of combat operations. And the factor of Syria in all this was by no means the last.

Ctrl Enter
Noticed oshЫbku Highlight text and press. Ctrl + Enter
We are
Results of the week. "Everything! Kina will not be! Electricity is over! ”Results of the week. “If I am leaning against a warm wall in a quiet place, then I’m still nothing at all!”
Military Reviewin Yandex News
Military Reviewin Google News
118 comments
Information
Dear reader, to leave comments on the publication, you must to register.