Deadly surprise for carrier-based aviation of the US Navy from the Chinese "Chengdu". Smashing Strike of the Swift Dragon 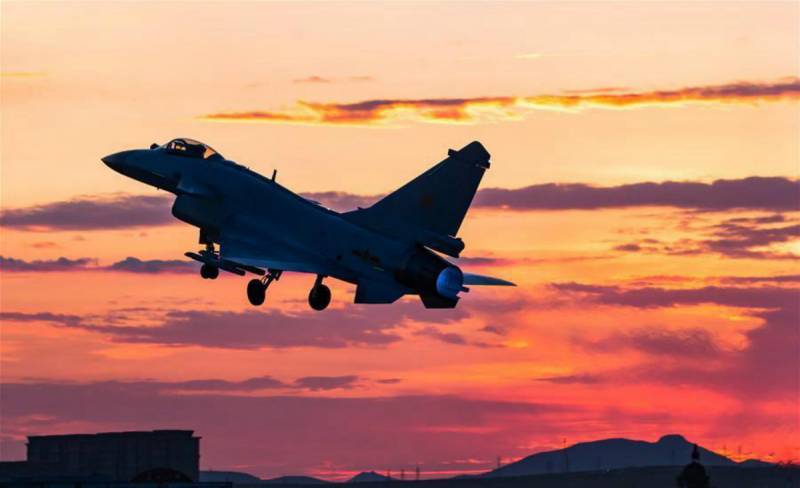 Getting acquainted with the vast military-technical expanses of the Chinese Internet (including forums, blog platforms, etc.), as well as watching “YouTube” video content on search queries related to the J-10A / B multipurpose fighter jets, you can not once stumble upon unique acrobatic maneuvers scaled models of these machines. Due to the presence of the simplest system of deviation of the thrust vector represented by an unregulated rotatable cylindrical nozzle, as well as an enormous thrust ratio compared to full-size serial samples of J-10A, these machines are capable of demonstrating pilotage with ultra-maneuverability right at the surface, possessing the highest angular speed of turn, maximum overload also overclocking parameters. Meanwhile, on the model aircraft alone, the OVT system integration program on the J-10A / B did not stop.

Thus, according to TASS information with reference to the Chinese resource Sina, an improved modification of the WS-10X Taihan turbojet afterburner engine with a thrust vector control system (UHT / OBT) was successfully tested in the last week of December. The light tactical fighter of the generation 4 ++ J-10B was taken as a flying laboratory. It is on this modification of the Swift Dragon that the Chinese Air Force commanders today make a big bet when considering building high-performance A2 / AD anti-aircraft zones over nearby areas of the South China and East China Seas, since its large-scale production is much less expensive than a series of subtle J -20 or J-31, while the technological parameters are significantly higher than the earlier version of the J-10A (detailed comparative overview below).

As for the Su-30MK2 / IWC, their Chinese Air Forces, obviously, plan to use the PLA as an operational airborne anti-ship component, intended for delivering massive strikes against the USS, India, Japan and, probably, Australia naval strike forces. Also, Su-001MK30 fighters equipped with far from the latest Cassegrain H2VE radars can be used to escort KJ-2000 radar early-warning and control aircraft: the deficiencies of the airborne radar will be compensated by obtaining information on the tactical situation from the RLDN aircraft using the coded radio channel.

It is known that an anonymous source in the Air Force told Sina about the use of information obtained during the WS-10X tests for further use at the time of integrating these engines into promising multi-purpose 5 generation fighters J-20 Black Eagle; but already there is a certain problem. The fact is that the J-20 glider designed according to the duck balancing scheme does not have decent maneuverability. Even in spite of the fact that the specific load on the wing with a normal take-off mass of J-20 is 13% less than that of the F-22A (due to almost the same wing area and slightly less normal take-off weight), the center section of the Chinese machine is noticeably shifted to the tail section that causes a noticeable deterioration in maneuverability at medium and low subsonic speeds.

An attempt to enter a high-speed unsteady turn will simply end with a breakdown of the “vortex harnesses” from the front horizontal tail with the sagging at the root of the wing, which will occur due to the structurally long-range location of the plane. As for the ordinary exit of the machine at high angles of attack, the front horizontal tail will allow you to implement a similar maneuver. Based on the above, we can draw the following conclusion: equipping the J-20 Black Eagle with a power set-up on the basis of two WS-10X TRDDFs with a deviating vector is possible and will even allow for implementing some elements of super-maneuverability in an unsteady turn; nevertheless, the feasibility of such a service pack for J-20 is extremely low. In close combat, this vehicle, even with the presence of military weapons, will not be able to “snatch” a victory from such vehicles as the Raptor or the Japanese 5-generation fighter ATD-X Shinshin, whose aerodynamic focus is shifted forward.

Prospective fighter J-20 is not designed for "dog dumps" and other high-intensity operations to gain air supremacy, requiring long turns with high angular speed. Its main tactical “fad” is “decapitating” strikes against strategically important island strongholds of the enemy, anti-ship operations against enemy AUG, as well as other missions aimed at overcoming enemy air defense / missile defense at medium and low altitudes with simultaneous anti-radar attacks (defeat of multifunctional radars Enemy air defenses, as well as radar long-range radar detection). Also, J-20 is able to perfectly prove itself in operations to intercept strategic anti-submarine aircraft P-8A "Poseidon", carrier-based aircraft RLDNN E-3D of the US Navy and radio-electronic reconnaissance aircraft RC-135V / W "Rivet Joint", patrolling the protesters Asia Pacific. To perform this range of tasks, the need to use engines with a deflected thrust vector is completely eliminated.

We will return to the consideration of the possibility of equipping transition-generation J-10B fighters with engines with WS-10X "Taihan" OBT. It is not difficult to guess that a number of design solutions (related to thrust vector control) used on the “Tayhan” were borrowed from the Russian turbojet forcing dual-loop AL-41F1С engines, which came under the very gaze of the Shenyang Liming Aircraft Engine Company back in late December 2016 of the year. Given the unique skills of Chinese design bureaus and research institutes that are “under the wing” of defense companies, in copying foreign technologies, one year might well have been enough to develop and refine a fully functional Chinese version of the AL-41F1C.

The J-10B use of a power plant based on an OVT engine is much more preferable than on a heavy J-20 with forward forward horizontal tail assembly. Using the example of maneuvering capabilities demonstrated by early J-10A during performances at dozens of aerospace showrooms, it can be determined that in close combat, these fighters are quite capable of “fighting” with almost any Western European and United States 4 + / ++ generations that not equipped with engines with OBE. By the angular speed of steady and unsteady turns, the Swift Dragon is ahead of F-35B, Swedish JAS-39C / E, and possibly F-16C Block 52 +. This is due to the use of the tailless aerodynamic scheme with a close-lying front horizontal tail, single-fin vertical tail, and a triangular middle wing. At the same time, due to the close positioning of CIP to the wing planes and its excess relative to the wing, all the disadvantages characteristic of J-20 are absent. The machine is able to maneuver for a long time with an angular speed of rotation of more than 20 degrees / s, as is done by Su-35С, MiG-29СМТ, MiG-35, F-15C / E, as well as Rafali and Typhoon, which was originally possible thanks to the installation of the Russian TRDDF AL-31F.

The latter provide the first version of the Swift Dragon with a 0,93 - 1,0 kgf / kg with a normal take-off weight (more than half of the fuel in the internal fuel system and an air-to-air suspension configuration). Afterburner on the midsection when it comes to 2572 kgf / sq. m, which is significantly higher than that of "Rafal" (2325 kgf / sq. m). This indicates the best acceleration qualities of the J-10A compared to other machines. Similar weight and dimensions are valid for the upgraded J-10B. Installing the updated “tactics” of the new engine “Taihan” with OVT will make it possible in the future to increase the thrust ratio to 1,0 - 1,1 kgf / kg with a normal take-off weight, since it is planned to bring the thrust to 14000 - 15000 kgf. After upgrading, the J-10B, even without the use of CWO, will be able to face any American carrier-based fighter (F / A-18E / F, F-35B / C) in equal combat on equal terms. All-view control of the nozzle will provide the “Swift Dragon” with close dominance over the Raptors and over the ATD-X. Indian Su-30MKI will remain the only worthy rivals.

Chengdu specialists also "stocked" for pilots of the American carrier-based fighter aviation and another “pleasant” surprise regarding the possibilities of conducting long-range air combat. The basis here is a promising airborne radar with an active KLJ-7A headlamp capable of detecting a Super Hornet target at a distance of 150-160 km and “capturing” it at a distance of 130-135 km. Given the skill of Chinese engineers in the development of modern air-based radar “equipment”, as well as the information field of tactical aviation cabins, we can confidently say that this radar has all the modes that are present in our Irbis-E radar and American AN / APG -79/81 (from tracking GMTI moving ground targets to a synthesized SAR aperture).

Reinforcing all this advanced electronic stuffing will be the use of PL-15 super-long-range guided air-to-air missiles equipped with integral rocket-ramjet engines with a large ratio of the gas generator flow control depth. These URVBs are distinguished by maintaining high flight speeds (more than 2 - 2,5М) even at the limits of the range due to the long burnout period of the gas generator, due to which PL-15 can destroy the most "swift" target at a distance of 170 - 200 km. Here's a deal, not counting the potential of the deck J-15S and the promising J-31, awaiting Americans in the Asia-Pacific region in the foreseeable future.