How to avoid a war in Korea?

January 3 2018
66
The situation on the Korean Peninsula is close to a military denouement, but the parties to the conflict are not yet ready for a compromise. Meanwhile, a similar crisis around the atomic program of Taiwan was successfully resolved in the beginning - mid 1970-s, and without the participation of the UN. First of all, thanks to a clear understanding in Beijing, Washington and Taipei of the consequences of the military actions of the PRC against Taiwan with the United States. 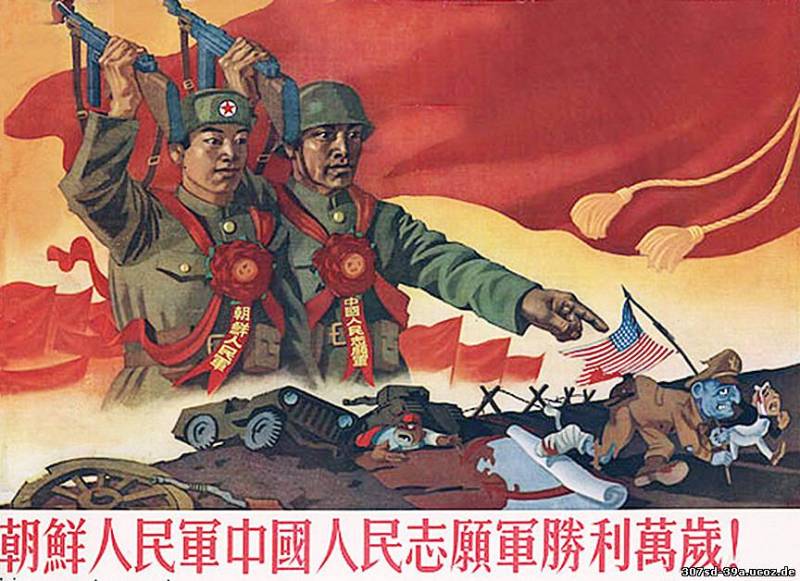 The background to the events is as follows. After the evacuation of the Kuomintang authorities and military units from mainland China to Taiwan and a number of adjoining Chinese islands (1949-1950) as a result of the civil war, the Republic of China on Taiwan (KDT) was proclaimed, which was threatened by the PRC . The Taiwan authorities, who had already received military-political support from Washington in 1950, decided to create their own atomic weapons. These works were accelerated after successful tests in the People's Republic of China of the atomic bomb in 1964 and the hydrogen one in 1967. In the same period, the PRC began to actively develop missile weapons and conduct their tests, moreover not far from the Taiwan Strait.

Back in 1961, a research nuclear reactor was installed at 2 MW at the Tsinghua National University of Technology and Technology in Taipei. Three years later, the Taiwanese leadership sanctioned R & D to develop nuclear and missile weapons as part of the 7-year program implemented by the National Institute of Science and Technology and the Scientific-Research Institute of Atomic Energy (it was created as early as 1960). In short, the military-political tension between Beijing and Taipei at that time was becoming dangerous. Especially in connection with the excesses of the notorious Cultural Revolution in the PRC, the US war in Vietnam and Taiwan’s attempts to conclude a military alliance with the Philippines, Thailand, South Korea and South Vietnam against the PRC.

Recall that the same political allies of Taiwan already had treaties on mutual defense with the United States.

So the conflict could well be transformed into a region-wide, and with the use of weapons of mass destruction. And the Taiwanese nuclear program was due to serious reasons, like the current one in North Korea.

Today it is also, firstly, the chain of large US military bases in South Korea and neighboring Japan, which, according to Pyongyang, has atomic weapons, and secondly, the growing presence of the US Navy in areas adjacent to the DPRK ... But back to the above Taiwanese R & D.

These research structures included all the main components for the production of atomic bombs: the commissioning of a heavy water reactor, the construction of a plant for the production of heavy water, a laboratory for the radiochemical processing of irradiated nuclear fuel and the release of plutonium. The total cost of such a program was, according to some estimates, at least 140 million dollars. At the same time, Taiwan received scientific and technical assistance from the USA, Canada, France, Israel and South Africa. Say for 1968-1974's. more than 300 Taiwanese nuclear specialists have been trained in the United States.

During the negotiations, representatives of the United States and China in Warsaw in 1958-1971. Beijing in 1967 made it clear that it could use any weapon against atomic objects in Taiwan. However, the growing tension on both sides of the Taiwan Strait was also due to the fact that at that time the "random" bombardment by the US Air Force of the southeast coast of the People's Republic of China adjacent to North Vietnam (DRV) became more frequent. Beijing, as you know, provided a variety of assistance to the DRV and through its territory transit of military goods to North Vietnam and to Laos from the USSR, Mongolia, the DPRK and most Eastern European socialist countries was carried out.

In the meantime, construction of a heavy water reactor with a capacity of 1969 MW on natural uranium imported from Canada began in the Taiwan Atomic Energy Research Institute in 40. And the French profile company Saint-Gobain Nucleaire supplied a laboratory facility for the separation of plutonium to 1967. As a consequence, the People's Republic of China in those years resumed shelling of the coastal islands controlled by the “Chinese Republic in Taiwan” and notified the United States of its intention to prevent the possession of Taipei atomic weapons. The calls to “liberate Taiwan!” Were at that time among the main themes of dazibao (agitplakatov of the times of the Cultural Revolution).

Obviously, for the United States, defeated both in South Vietnam and in Laos, there was no reason to be drawn into the conflict between Taipei and Beijing.

Moreover, the Americans hoped to take advantage of Beijing’s confrontation with Moscow. Therefore, in 1970, Washington’s representatives in the Warsaw talks with their PRC colleagues indicated their position as follows: The US will begin withdrawing its military bases from Taiwan and the Taiwan Strait Islands, stop regular patrols of the strait and disavow the Taiwan nuclear weapons program. In turn, Beijing was asked to pledge not to use military force against Taiwan and to minimize the deployment of weapons of mass destruction near the strait. China agreed to such a "barter".

I must say that the implementation of these measures, the United States began in the late 1960-x. Not without pressure from the Americans 1 July 1968. Taiwan signed the Treaty on the Non-Proliferation of Nuclear Weapons (NPT), and 27 January 1970-th completed all the procedures for ratifying the Treaty. Guarantees regarding non-military use of atomic energy by Taiwan are provided for by two IAEA agreements with Taiwan, which are in force with 13 in October, 1969 and 6 in December, 1971. There are three of them on the island today).

Similar agreements of the DPRK with the United States predetermined the signing by North Korea of ​​the NPT in 1985.

But Pyongyang came out of this treaty in 2003, according to the North Korean government, in connection with "... a serious situation in which the sovereignty of the Korean nation and the security of the DPRK are violated as a result of the hostile US policy towards the DPRK."

Because unlike Taiwan and the Taiwan Strait, from where the US military bases were evacuated to 1972-1975, the presence of all United States military branches near the DPRK continued to increase and is still increasing.

And yet, in April, 1973 launched a heavy-water reactor in Taiwan, as the authorities did not hope - especially after the visit of US President R. Nixon to China in February 1972 - for Washington’s unconditional assistance in case of invasion by Chinese troops. Note that similar, if, in fact, not similar reasons, lie at the heart of the North Korean protective measures. The most important of these reasons emerged at the turn of the 1980-1990-s: the official recognition by Beijing of the South Korean state; the termination of the Soviet-North Korean Treaty of Friendship and Mutual Assistance (1960) in view of the dissolution of the USSR; reinforcement of the South Korean troops in the vicinity of the inter-Korean demarcation line; repeated refusals of the United States to replace the armistice agreement (1953) with the permanent peace agreement between Washington and Seoul with Pyongyang. Therefore, Pyongyang already from the middle of 1990-x, like Taipei in 1970-x - the beginning of 1980-x, reduced the amount of information transmitted to the IAEA, complicated the conditions for inspection by experts of the agency of atomic and related facilities.

In the meantime, experts from the MGATE in 1976 have discovered experiments in the military sector in Taiwan with unaccounted 500 grams of Taiwanese plutonium in Taiwan. As a result, under pressure from the United States and the IAEA, the island’s authorities officially announced in September 1976 (shortly after the funeral of Mao Zedong) that they would abandon military developments in the nuclear field. But the final cessation of patrols by the US Navy of the Taiwan Strait with 1978 and the official recognition of 1979 by the United States PRC in January, with the simultaneous breaking of official US-Taiwan diplomatic relations, became new incentives for reanimation of the Taiwan atomic weapon program. In particular, construction of hot cells for the separation of plutonium began at the Institute of Atomic Energy in 1987.

Such a situation called into question increasingly favorable trends in the political and economic relations between the United States and the People's Republic of China.

Therefore, the IAEA and especially Washington have made every effort (including in the field of trade and investment cooperation between the US and Taiwan) for the final termination of the Taiwan nuclear program.

This had an effect: in 1990, the authorities of the “Chinese Republic in Taiwan” officially abandoned this program. The heavy water reactor, located at the Institute of Atomic Energy, was stopped in the first half of 1990's and then dismantled.

It is worth recalling that the relaxation of tension between Taipei and Beijing contributed, along with the factors mentioned, to the evacuation of 1972-1974. US atomic weapons from their military bases in Taiwan and on islands in the Taiwan Strait (located there since 1958). But today, the DPRK government claims that such weapons, firstly, are preserved at military bases of the United States and in South Korea and in Japan. Second, they are owned by the US Navy and Air Force, which have already settled near North Korea. Therefore, its authorities, shall we say, are now implementing the "plans of Taiwan."

To summarize: the full relaxation of tension between Beijing, on the one hand, and Taipei and Washington, on the other, was based on compromises: the withdrawal of US military bases, incl. American atomic weapons from the Taiwan region; Washington's diplomatic recognition of the PRC; US rejection of political and economic blocking of mainland China. Beijing, in turn, abandoned military reunification with Taiwan, demilitarized its coast of the Taiwan Strait and the adjacent region, including weapons of mass destruction. It was within such a framework that the pressure on Taipei with a view to ending the nuclear program proved successful. Apparently, an equally comprehensive approach is also required in the North Korean conflict. As evidenced by recent experience storiesfirst of all, direct negotiations between Washington and Seoul with Pyongyang are needed.

Ctrl Enter
Noticed oshЫbku Highlight text and press. Ctrl + Enter
We are
Taiwan's last chanceChina and Taiwan: the first official meeting in 65 years
66 comments
Information
Dear reader, to leave comments on the publication, you must to register.