Ice cutter "Fedor Litke" - the history of the ship and ship 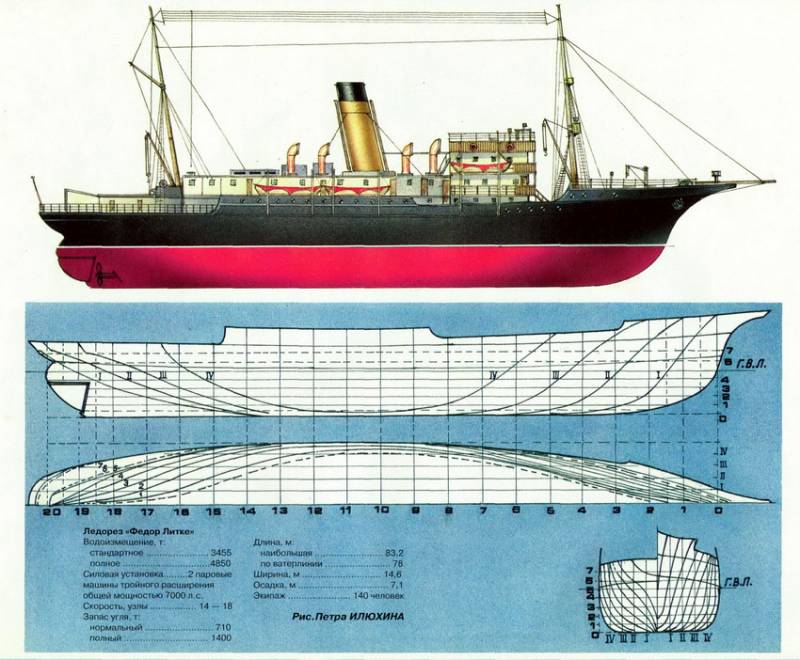 This unusual vessel, the Earl Gray, was built at 1909 in the British shipyards Vikkers for Canadians to work at the mouth of the St. Lawrence River and the Bay of the same name. Outwardly, with a graceful bow, topped with a bowsprit, a slightly inclined high chimney and an elongated superstructure, it looked more like a large steam yacht. By the way, it had the apartments of the Governor-General of Canada, cabins for 55 passengers of the 1 class and 20 for 2 passengers. The vessel was supposed to be used for the transport of mail and people, the protection of fisheries, etc.

The ship belonged to the category of icebreakers, but was very different from them. If for those the ratio of hull length to width is 3,5 - 4,5 - short and wide, they maneuver much better than the ships they watch over in maneuvers, then at Earl Gray it reached 5,5. The bow of the icebreakers above the waterline is usually straight, and below it is beveled at a large angle. This shape of the hull allows them not only to ram the ice with frontal impacts, but also to crawl onto it in order to crush their own weight. At Earl Gray, the nasal tip with a 31 mm thick skin was pointed, the sides were straight, so the ship cut ice, pushing the wreckage to the sides. To combat strong, perennial polar ice, the ice cutter was not intended and not suitable, and it remained the only example of its class in the world icebreaking navy.

At the start of the 1 World War II, Russia bought several icebreaking vessels abroad, including the Earl Gray. It was renamed “Canada” and transferred to the disposal of the Maritime Transport Authority of the White Sea-Murmansk region. As early as November 1914, the ice-cutter began to route Russian and allied transports with military cargoes through the freezing White Sea to Arkhangelsk. 9 January 1917 “Canada” was unlucky, she came across an underwater rock not marked on the map and sank in the Yokangi roadstead. 16 June it was lifted and sent for repair, and October 26 was armed and enrolled in the Arctic Ocean flotilla.

In January, 1918. Canada was demobilized. In the civil war, it was captured by the English invaders and transferred to the White Guards. In March 1920, they and others hastily left the Russian North, taking a number of Russian ships. But not “Canada” - staffed with red warmers, she tried to prevent this and entered into a firefight with the departing “Kozma Minin”. Thus, the first and so far the only artillery battle of icebreakers outside the Arctic Circle took place.

In April, 1920 “Canada” became the auxiliary cruiser of the Red White Sea flotilla, and a month later it received the third name “III International”. Ledorez had a chance to take part in the rescue of the white ship “Solovei Budimirovich” (later “Malygin”), which was covered with ice in the Kara Sea, - its passengers and crew were on the verge of death from cold and hunger

It was only in June 1921 that the “III International” was returned to Mortrans, and there again it was renamed on July 12, this time in honor of the famous navigator and geographer, President of the Petersburg Academy of Sciences, Admiral F. P. Litke (1797 — 1882). Designed to overcome the weak or broken ice, the ship conscientiously worked in the Arctic, conducting caravans, serving crafts and stations, then in the Baltic and Black Sea, in 1929 it returned to the Arctic, made a risky voyage to Wrangel Island and was awarded the Order of Labor Red Banner. In winter, 1931 confirmed its reputation - despite the extremely difficult conditions, it led a caravan to the Sea of ​​Okhotsk. Thanks largely to his captain N. M. Nikolayev, who before the revolution finished the Marine Corps and served in the North with 1917, in particular, on the icebreaker Stepan Makarov, gaining considerable experience.

In 1932 - 1933 "Litke" has become a forwarding ship, it settled scientists who worked on the program 2-th International Year of the Arctic.

It was possible icebreaker to participate in the "Chelyuskin" epic. Damage to the hull and mechanisms did not allow him to pass in the ice of the Chukchi Sea to bring the wiped steamer into the clear water, which, unlike Sibiryakov, was not destined to go along the Northern Sea Route from west to east in one navigation.

28 June 1934 “Litke” left Vladivostok and headed north. On board were members of the expedition headed by corresponding member of the USSR Academy of Sciences V.Yu. Vize. Ledorez slowly and methodically overcame the Northern Sea Route, having at the same time rescued merchant ships stuck in Taimyr and worked for Fr. Dixon, providing the movement of caravans with economic cargoes. September 20 "Litke" moored in Murmansk, leaving thousands of miles as a stern, including 6 - in the ice. The government telegram sent to Nikolayev and Vize said: “We warmly congratulate and welcome the participants of the ice-cutter expedition” F. Litke "for the first time in stories Arctic voyages completing a single navigation through hike from the Far East to the West. Successes expedition “F. Litke "testifies to the solid conquest of the Arctic by the Soviet sailors." Many years later, the 3 polar explorer. M. Kanevsky emphasized a very important circumstance: “This voyage can be considered exemplary, it was superbly organized, carried out clearly, immaculately, using the best that science and technology had.” Numerous fights with ice were not in vain - an ice cutter immediately had to be put in for a thorough repair. But as early as next year, the usual steamers “Vanzetti” and “Iskra” passed through the Northern Sea Route from Murmansk to Vladivostok, and “Anadyr” and “Stalingrad” - on a reciprocal course.

In 1936, the town of Litke again distinguished itself — along with the icebreaker steamer Anadyr, the destroyers Stalin and Voykov sent along the coast of Siberia, sent from the Baltic to strengthen the Pacific Fleet. A participant in that operation, A. M. Matiyasevich, the senior assistant to the captain of the Anadyr (he commanded the Baltic submarine Lembit on Great Patriotic War) recalled: “Litke overcame separate ice clusters on the move, followed by Anadyr, extending the passage , then destroyers and locking tankers. For the first time in the history of navigation, warships passed the Northern Sea Route from the Barents Sea to the Bering Sea, rounding Cape Dezhnev. ”
The following year, the ice-cutter was unlucky - accompanying the 5 transports, he, along with them, got into the heavy ice, could not escape. Rescued a powerful icebreaker "Yermak". And again posting caravans, trips to the polar stations.

In 1939, the Soviet-Finnish war began. In January, the Litke 1940 was turned into the Northern Fleet patrol ship, in which capacity it remained until April 8, after which it was demobilized and returned to the General Directorate of the Administration of the Northern Sea Route. But, as it turned out, not for long. 25 July 1941 the ship was once again called into service, they raised a naval flag on it, installed two 45-mm cannons and several machine guns, assigning the next designation CKR-18 (patrol ship). Soon, the weapons were recognized as insufficient, and the forty-fives replaced the 130-mm guns.

In August, the patrol entered the newly formed Northern detachment of the White Sea Flotilla, which was to protect the new-land straits. However, it soon became clear that the German warships (except submarines) did not risk appearing in these waters, and CKR-18 was sent to do direct work - to drive caravans from the White Sea to Kara and back. On several occasions, the old ice-cutter carried out purely combat missions, for example, in January 1942 was escorting a damaged new line icebreaker “I. Stalin. " And 20 August itself was attacked by the enemy submarine U-456, but managed to avoid torpedoes. It was known that enemy pilots and submariners aggressively hunt for Soviet icebreakers, without which normal transportation of strategic cargoes across the polar seas would not be possible. Nevertheless, during the whole war the Germans did not succeed not only to sink, but also to permanently disable a single icebreaker.

By February 1944, the Northern Fleet was replenished with warships of domestic construction and received from the allies, the need for improvised trawlers and patrol boats began to disappear. Litke was handed over to the operational subordination to the Head Office of the Administration of the Northern Sea Route.

The war ended, and the ice-cutter again took up the usual work - escorting caravans and individual ships. And in 1946, an expedition set off on a high-altitude voyage on it, two years later such a voyage repeated - the possibility of launching transport ships along the so-called “Great Northern Polynia” was sought.

In 1955, participating in the next research enterprise organized by the Arctic Institute, he rose to 83 ° 21 'north latitude, setting a free-swimming record in the Arctic Ocean, not having reached all 440 miles (810 km) to the North Pole. This achievement over the years surpassed only huge icebreakers equipped with nuclear power plants.
14 in November 1958 of “Litke”, as completely outdated, was decommissioned and after some time was scrapped. At that time, his fate was also shared by other famous veterans of the Arctic - the Makarov icebreaker Yermak, the icebreaking steamers George Sedov, Dezhnev, and others who did a lot to make the Northern Sea Route a normal operating mainline.

Ctrl Enter
Noticed oshЫbku Highlight text and press. Ctrl + Enter
We are
Construction of the first Soviet Arctic icebreakers"Svetlana". History of creation
31 comment
Information
Dear reader, to leave comments on the publication, you must to register.