What discount did the President of Moldova ask for Miller?

December 27 2017
51
Moldovan President Igor Dodon met with Alexey Miller, Chairman of the Gazprom Management Committee. Dodon congratulated Miller on the upcoming New Year and Christmas and asked for gas discounts for Moldova. From the publication of Igor Dodon himself in the social network Facebook:
I turned to the head of Gazprom, Alexey Miller, with a request to give Moldova a discount on gas in 10-15% (as for the EEU countries). The cost of gas for Moldova in recent years has decreased by more than 2 times. Accordingly, it is necessary to reduce the price of gas for the end user.

Dodon reports:
Held a meeting with Alexey Miller, Chairman of the Gazprom Management Committee.
We discussed issues of cooperation between Moldova and Russia in the energy sector. He noted that the relations between Gazprom and the Republic of Moldova are regulated by a contract signed by the former First Deputy Prime Minister Zinaida Greceanii in December 2006 of the year and valid until 2019 of the year.

The cost of natural gas for Moldova is regulated by a special formula, according to which Moldova currently pays approximately 175 US dollars per thousand cubic meters of natural gas compared to previous years, when our country paid almost 400 dollars for the same amount of gas. However, despite the fact that over the course of several years, the price of gas for Moldova decreased by more than 2 times, the population pays almost 380 dollars per thousand cubic meters. It is necessary to reduce the price of gas for the end user.

Due to the fact that Moldova submitted an application for observer status in the EAEU, approved by all members of this association, turned to the head of Gazprom with a request to reduce the price of gas for Moldova by another 10 - 15%. In the future, we hope to reach gas prices at the level of the EAEU member countries. This will allow further reduction of gas tariffs for end users. This, in turn, will give a chain reaction to the cheapening of all goods and services in our country.

At the end of the meeting, he congratulated Alexey Miller on the upcoming New Year and Christmas, wished him health and every success in the new year. 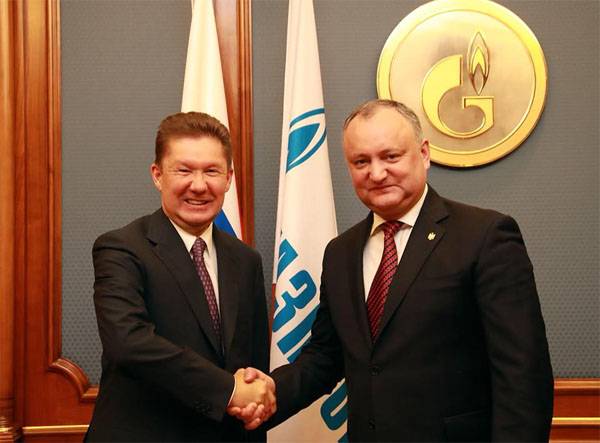 The statement addressed to Miller that when buying gas from Russia at a price of 175 dollars inside Moldova, citizens pay almost 380 dollars, it looks strange. It turns out that the Moldovan authorities themselves turn up prices for their own citizens, and at the same time expect even bigger discounts from Russia ...

It is clear that the discount may be aimed at supporting the president loyal to Russia. However, this raises the question of whether Gazprom will give a discount to 10-15% to an ordinary Russian consumer (who is, by definition, more loyal than any foreign president), if he asks Alexey Miller in a congratulatory letter (to meet an ordinary citizen with the head of the national heritage) eye to eye is unlikely to succeed).