December 27 2017
15
24 months after the Indian Army issued a request for information (RFI) on a promising core project tank Future Ready Combat Vehicle (FRCV), she had to reconsider her excessively high requirements and send a second request for a less ambitious, but more affordable family of heavy armored vehicles, reports bmpd with reference to the expert of the International Institute for Strategic Studies (IISS) Tom Waldwin. 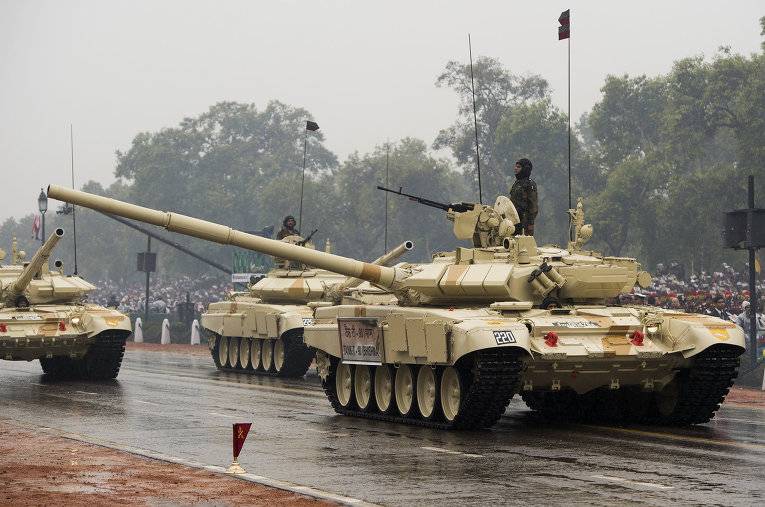 “The first request for information (RFI) of June 2015 of the year was replaced by a document issued in 2017 year, which amended the program of the proposed replacement of the order of 2000 T-72М1 tanks of the Indian army for 1770 units of advanced equipment FRCV. So, from the 11 modifications FRCV, proposed in 2015 year, there are five. In particular, the wheeled armored cannon car (“Wheeled version”) disappeared from the list, while the ambitions for the light tank remained (“Light Tank”), ”the expert writes.

It is reported that, in accordance with the updated RFI, "the combat weight of the base platform of the main tank (Baseline MBT Рéform) must be from 42,5 to 58 tons - the same range as the tank T-72M1 in service with." This "most important" characteristic is due to the geography of the country and infrastructure.

"Despite the fact that India is open to proposals for tanks with a crew of 4 people and 120-mm gun, many years of experience using tanks T-72M1 and T-90C with three crew members and 125-mm guns can lead the country to the choice of more familiar options ", - stated in the material.

The Indian Ministry of Defense is looking for a foreign company to supply a “proven combat armored vehicle”, and then plans to cooperate with a local Indian company that will be engaged in production. The announced requirements seem to limit the choices to proposals from South Korea, Japan and Russia.

“T-90MS is the most modern modification of the Russian T-90 tank. Since the middle of the 2000-s, India has been carrying out licensed production of its earlier version of the T-90С; more than 1000 units are in service with the country. The choice of T-90MS under the FRCV program would mean that the Indian army makes a choice in favor of a homogeneous T-90 fleet, instead of a mixed version, ”the expert notes.

Another option is the tank "Armata". Although it cannot be called "proven", as he has yet to enter into service with the Russian Army, the demands made by the Indian side make it a serious candidate. “Despite the fact that the introduction of a partner in the Armat program will become a complicating factor for Moscow, the division of production costs and the maintenance of an order are most likely to be welcomed,” the article says.

The FRCV program is important not only in terms of the replacement of T-72 tanks, but also in connection with the refusal of the Indian army from the corresponding project of the Organization for Defense Research and Development (DRDO). Indian project of the main tank Arjun Mk I, история which originated in the 1970-ies, faced many years of delays and cost overruns, until in 2009 the year after the construction of 122 from 124 custom tanks production was not curtailed. Since then, DRDO has been working on its improved version of the Arjun Mk II. However, new supply contracts were no longer concluded. This is partly due to the resistance of the Indian army due to the heavy weight of the tank, which is said to be 68,6 tons.

Potential participants of the Indian program of the main tank FRCV:

Ctrl Enter
Noticed oshЫbku Highlight text and press. Ctrl + Enter
We are
From Australia to Japan: everyone needs armored vehiclesWorld market and production of armored vehicles (part 3 of 3)
15 comments
Information
Dear reader, to leave comments on the publication, you must to register.