A word about Donetsk veteran

December 27 2017
10
A few days ago, on December 21, one of the winners of the Great Patriotic War died in Donetsk. The man who fought against the Nazis in the distant forties, and in the last years of his life - already with his Word - against the new fascism. This is a war veteran Vsevolod G. Kozorez. 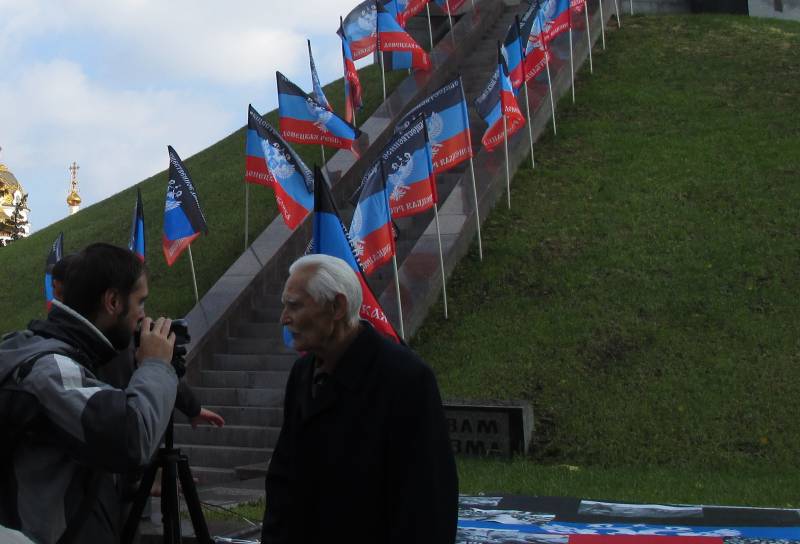 A tongue would not turn to call him an old man. Despite his rather respectable age (Vsevolod Grigorievich 1926, born), he looked younger than his years. Kept very cheerful. Often spoke at rallies and various celebrations in the young Donetsk People's Republic, which he welcomed with all his heart.

“If I were younger,” he said repeatedly, “I myself would weapons in the hands of fought against the new Bandera ".

He loved to tell young people and schoolchildren about the events of the long war. It happened - what a sin to conceal - the organizers of the events were compelled, as gently and gently as possible, to interrupt his meaningful speech. Fascinated by the story, the veteran did not fit into the regulations. And in the 1943 year, he, too, did not meet the rules - he had not yet turned 18 years, and he attributed an extra year to himself and went into the army - to beat the fascists.

Vsevolod Grigorievich Kozorez was born on January 12 on January 1926 in the Chernihiv region, in the village of Pliski. Then, together with his family, he moved to Putivl (Sumy region). There he found the war.

When the fascists captured Putivl, young Vsevolod together with his friends began to help the partisans. The boys collected weapons and handed them over to the adult fighters, pasted flyers, got intelligence information. Once, he shared memories at a meeting, the occupiers caught him along with one of his friends. The guys got off relatively easily: fortunately, the enemies could not blame them for anything significant, except what could be called "petty hooliganism." They were beaten with ramrods, after which they were released, threatening to shoot them if they were caught the next time.

In early 1943, Vsevolod decided to fight in the ranks of the Red Army. For this, he and his friend crossed the front line, making his way through the snow. He had to ascribe himself a year, so as not to be denied by age. Entered the 262nd heavy tank regiment. He took part in the battles on the Kursk Bulge. Then Vsevolod Kozorez got into the Ural Volunteer Tank Corps. This corps was notable for the fact that simple workers collected funds for weapons and equipment for it, deducting donations from their modest salaries. The Nazis nicknamed this corps "the division of black knives."

Kozorez participated in the battles for the liberation of Ukraine, in particular - Lviv. Unfortunately, it was in this city that subsequently there was too little elementary respect for the veterans of the Great Patriotic War ... But this later, and then ...

22 July 1944, during the battles for Lviv, the group that included Vsevolod Grigorievich managed to capture a fascist. Having somehow interrogated him (and Kozorez knew a little German), the fighters learned that the Nazis were planning to blow up the Lviv Opera House. They reported this to their higher commanders and received an order: to save the building.

When a group of Soviet soldiers in two tanks approached the opera house - there were about a dozen fascists. Following the captured German, part of the fighters descended into the basement - there was already preparing to undermine the building. Just a few minutes - and the monument of architecture would have flown into the air. "Hyundai hoh!" Shouted Kozorez. The nazis were unexpectedly given weapons. They could not assume that they would interfere. Soviet soldiers forced the enemies to take out the detonators and bring the explosives out. The theater was saved. On the wall in the basement, Vsevolod Grigorievich wrote: “The theater has been cleared of mine” - and indicated his last name and field mail.

After the liberation of Ukraine, Kozorez participated in the liberation of Poland, then he reached Berlin. In one of the battles, he fired a machine gun at a fascist plane - and very successfully hit. Junkers were shot down. For this, Marshal Konev presented the Order of the Great Patriotic War to a brave sergeant.

When Berlin was taken and a few days left until Victory Day, Vsevolod Grigorievich was sent to Czechoslovakia. 9 May 1945, when the whole country celebrated the Victory, they entered Prague. There the fights were still going on. 11 May Kozorez was seriously wounded, he was barely saved. But, he said, even this sad circumstance could not darken the greatest joy of victory.

Having recovered, he went to the Donbass. There he tried to choose between medicine and mining work. As a result, began to work on the restoration of mines. Then he began to write articles in newspapers, went to journalism, worked in the newspaper "Socialist Donbass."

In 80-s, in the basement of the Lviv Opera House, during the renovation, they found an entry that Vsevolod Grigorievich left there on the day when he saved the building from an explosion. They invited him to Lviv, but he chose to stay in Donetsk.

After the “perestroika” and the collapse of the Soviet Union, he was denied the title “Honorary Citizen of Lviv” - despite his services to this city. In particular, because he categorically refused to go to reconciliation with Bandera (the idea of ​​such a “reconciliation” was often mentioned during the presidency of Viktor Yushchenko).

With great pain, Vsevolod Grigorievich perceived the destruction of monuments of the Soviet era, the persecution of war veterans, the torchlight procession of neo-Nazis ...

Until the last days of his life, Vsevolod Grigorievich Kozorez was in the ranks of those who fought for the Republic. And even though he could not personally carry weapons, he had another weapon — his word, his memories, his stories about the war. Unfortunately, many veterans, and representatives of the generation of children of war, saw the grin of fascism a second time - when artillery was beating on the peaceful cities of Donbass. But he was among those who again met the war with dignity and courage. And resisted the aggressor as he could. He was even included in the base of the site "Peacemaker" as a dangerous "propagandist" ...

At one of the meetings (October 28 2015 of the year), he wished the people of Ukraine liberation from Bandera and expressed the hope that he would live to this day. Unfortunately, I did not live. But his words can be considered as the ideological testament of the older generation - Ukraine should again be cleansed of the "brown plague". 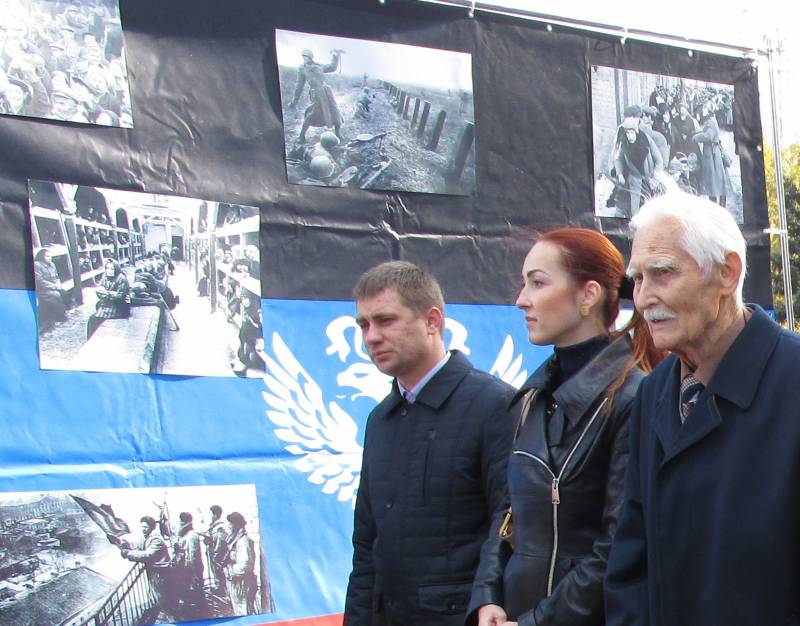 V.G.Kozorez at the October 28 rally 2015 of the year in honor of the anniversary of the liberation of Ukraine from the Nazis