The main enemy of "Onyx" is almost in the series. Britain creates a problem of anti-ship potential of the Russian Navy 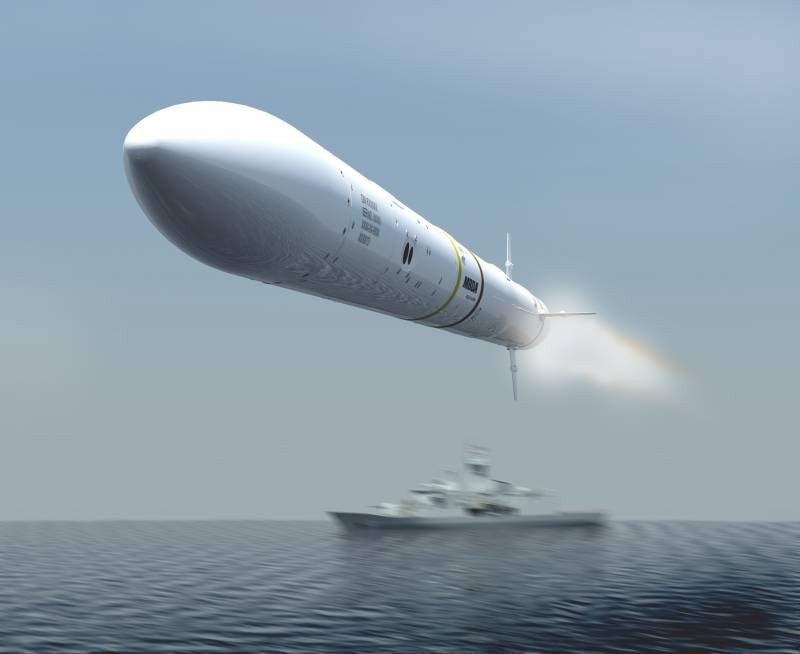 One of the most important elements in maintaining the combat stability of modern naval and carrier strike groups, without a doubt, are promising naval anti-aircraft missile and anti-aircraft missile and artillery complexes of self-defense of short and medium range, designed to cover both individual NK and warrants in general from massed "star" attacks by anti-ship and anti-radar missiles of the enemy. The list of the main requirements for this anti-aircraft / anti-missile armament in the XXI century includes: compactness of interceptor missiles, their high maneuverability, as well as guidance systems, allowing to realize the principle of “let-forget” and not overload the computing power of the multifunctional guidance radar and combat information and control system (we are talking about equipping missiles with infrared and active radar homing heads). Due to this, there is a quick release of target channels MRLS, as well as channels of simultaneously induced interceptor missiles, which greatly increases the fire performance of the ship or ground-based air defense missile systems.

As we have repeatedly noted in numerous previous works, the US Navy in this direction is still lagging behind the developed fleets of Western European states, as well as the Russian Navy. So that no one else has any questions about the current capabilities of the Aegis-ESSM ligament in confronting the massive use of small-size high-speed anti-ship and anti-radar missiles of the enemy, we recall that at the moment the ammunition assembly of universal launchers Mk 41 destroyers of the class Arleigh Burke and “Ticonderoga” missile cruisers are represented by the RIM-162 “Evolved Sea Sparrow Missile” anti-aircraft missiles of the Block 1 modification equipped with semi-active radar GPS. These interceptors require constant illumination from the side of the AN / SPG-62 radar; the latter aboard the Arleigh Burke are only 3, and therefore the number of simultaneously hit targets is 3 units, while the ZUR correction channels are 18 (the number of missiles simultaneously launched to intercept). At the same time, the approach of several dozen EHVs distributed over the echelons to the Aegis ship will “overload” the target channels, and the target will be hit.

RIM-174 ERAM (SM-6) ultra-long-range anti-aircraft guided missiles that use the AIM-120C AMRAAM air combat missile with an increased slot area Here, the simultaneous defeat of 18 VC can be implemented, since the SM-6 does not depend on the 3-4 illumination channels of the SPG-62 and use the data received from the main AN-SPY-1A / D (V). However, the use of a limited arsenal of SM-6 to destroy the attacking PKR, PRLR and other elements of high-precision weapons is an extremely expensive and inexpedient pleasure, capable of depriving a warship of an anti-aircraft arsenal in a matter of minutes, and therefore American sailors will have another two or three years to wait for their initial combat readiness with advanced RIM-162 Block II ESSM (this will happen no earlier than 2019). And the maneuverability of the SM-6 leaves much to be desired: the presence of only aerodynamic rudders does not allow intercepting vigorously maneuvering with overloads of more than 12-20 units. anti-ship missiles, while RIM-162 have an OVT gas-jet system that brings the available missile overloads to 50-55G during burnout of a solid propellant charge.

Unable to provide full protection from modern air threats and shipboard anti-aircraft missile systems modifications "RAM" and "SeaRAM". Complexes presented multiply modular inclined launchers Mk 49 (equipped with 21-th transport and start-up cell for NK large displacement), as well as more compact Mk 15 Mod 31 CIWS (performed in a "package" of 11 TPK with integrated opto-electronic and radar posts for ships of small displacement) are equipped with anti-aircraft short-range anti-aircraft missiles RIM-116A / B worth 350 - 450 thousand dollars per unit. Despite the fact that the latter are equipped with sufficiently effective and interference-free infrared-ultraviolet 2-range homing heads POST-RMP from the Stinger FIM-92B anti-aircraft missiles of the Stinger complex, the probability of interception of anti-aircraft maneuvers of supersonic anti-ship missiles remains extremely low, since the Mk XNUM solid propellant maneuvers Mod 36 (from AIM-11M air combat missiles) is not capable of maintaining high supersonic flight speeds for a long time at the level of 9-2,3М, especially at ultra-low altitudes, where the effect a erodynamic inhibition reaches the limit values. In particular, if the speed of the RIM-2,5A / B missiles reaches 116 km / h at the time of the solid-fuel charge of the main engine, then immediately after its burning it begins to decrease rapidly to 2520-1,5М when even maneuvering subsonic anti-ship missiles become impossible to intercept.

For example, RIM-116 Block I anti-aircraft guided missiles can destroy targets maneuvering with 10-12G overloads at a distance of no more than 5-6 km, while the Block II missiles with 1,3 times more long-playing engines - at a distance of 7-9 km As for the air attack tools operating with the G-limit in 15 and more units, SeaRAM cannot strike them at all due to the lack of advanced controls (gas-dynamic transverse control engines and / or gas-jet or interceptor thrust vector deflection systems). Moreover, the RIM-116A / B anti-aircraft interceptor missiles are not able to effectively counter high-precision missiles equipped with passive homing tools, as well as those approaching with a spent fuel charge. This category of targets includes corrected, guided bombs, as well as anti-radar missiles. All of the above weapons have almost zero infrared signatures (they are not capable of “capturing” IR GOS POST-RMP), and also do not emit electromagnetic waves, which are the main source of target designation for specialized paired passive radar sensors placed in front of the IKGSN fairing RIM-116B.

Nevertheless, these self-defense anti-aircraft missile systems are far from the most advanced anti-missile weapons to cover the near borders of Western ship and carrier strike groups. According to the TASS news agency, citing the British edition of The Daily Telegraph, December 21 of 2017, the advanced sea-level anti-aircraft missile system Sea Ceptor mounted on the HMS Agryll (F231) frigate of the Duke class was successfully conducted. During the dual launch of the CAMM, 2 aerial targets were destroyed. Recall that in the early summer of this year were conducted throwing trials of missile data, then, in September, the British Navy, together with the specialists of the British division of MBDA (Matra BAE Dynamics Alenia), conducted full-scale tests to intercept a single air target . An extremely valuable information base was obtained regarding the flight-technical features of the promising CAMM interceptor missiles and the operation of a two-way radio channel for data exchange between the missile and the ship's MRLS, or other means of target designation. This groundwork will make it possible to even more clearly optimize the software algorithms of the inertial navigation system and the homing heads of the CAMM missiles for use over the surface of marine / oceanic theaters of military operations.

What features can the CAMM anti-aircraft guided missile boast in comparison with our short range interceptors 9М330-2 / 9М338 of the Kinzhal / M-Tor complexes? Firstly, excellent network-centricity on the marine theater of the 21st century. This missile system was designed according to a modular scheme in the framework of the single FLAADS program (“Future Low-Altitude Air Defense System”) in parallel with the ground-to-air ground-to-air CAMM (L) missile and air-to-air CAMM (A) air defense missile. "Dog dumps" and medium-range air combat, and therefore it can be programmatically adapted for obtaining target designation from third-party sources (airborne aircraft E-3D, subtle F-35B fighter jets, etc.). In our 9М330-2 anti-aircraft missiles and the promising 9М338 (Р3В), this quality is not implemented even at the hardware level, especially since it does not allow to make radio command control strictly dependent on the control radio channel on the carrier. In turn, the radio command control reveals another well-known drawback of the M-Torov and Daggers - the limited target channel of the complexes, where one module / antenna post of the IRN9A331MK-1 or K-12-1 can provide simultaneous fire work no more than on four air targets.

The British Sea Ceptor anti-aircraft missile system is devoid of this problem, since the CAMM anti-aircraft missiles are equipped with active radar homing heads, making it possible to simultaneously fire up to several dozens of air targets (depending on the ship’s decimeter ЛRLS computational capability) . Similar parameters are possessed by Umkhonto-R short-range / medium-range anti-aircraft missiles used by the Umkhonto complex from the South African defense company Denel Dynamics. In comparison with the three-band homing head of the RIM-116B SAM (IR / UV and passive radar), ARGSN CAMM missiles do not impose restrictions on the interception of "cold" air targets with an inactive engine flying up to the defended object. Also, the probability of destroying a target by the kinetic method (direct hit) increases by several dozen times, which opens up certain “horizons” in the fight against ballistic objects.

Secondly, the CAMM anti-aircraft missiles have a maximum flight speed of 3700 km / h, which makes it possible to overtake such complex and high-speed anti-ship missiles like the Granit and even the Onyx 3М45 in flight from a short distance; moreover, such speed will allow to prolong the process of ballistic braking of a rocket, which increases the effective range for any type of targets, even after burning out the fuel. For maneuvering characteristics of CAMM rockets, aerodynamic tail rudders are responsible, and it is possible (not confirmed) and tail gas rudders. As is known, the latter are intended to induce the missile defense in the direction of the target immediately after the CAMM leaves the TPC of a vertical launcher, but can also be used at the moment of active turning to the target in addition to the aerodynamic planes.

If you look closely at the demonstration videos made at the MBDA laboratory stand, as well as during throwing tests and at the test site, you will notice that the rocket is equipped with a gas-jet thrust vector deflection system, represented by a cross-shaped nozzle tail, performing its function throughout the entire engine operation period. Elements OVT are mechanically synchronized with the servos controlling the aerodynamic control surfaces.

From all this it follows that CAMM missile interceptors, having a ridiculous mass of 99 kg and body elements based on high-strength composite materials and alloys, are capable of reaching 60-70 units, as well as their South African "relatives" Umkhonto-R ". As a result, the British CAMM missiles are able to withstand even the most nimble supersonic anti-ship missiles of the 3M55 Onyx, 3M54E Caliber-NK and X-41 Moskit types. As for the range, the standard version of the CAMM rocket (3200 mm long and 166 mm body diameter) can work on targets at a distance of up to 30 km, long-range (CAMM-ER, developed with the support of the Italian MBDA division) - 45-50 km . These missiles can be used both from the standard VPU GWS26 Mod.1 for Sea Wolf missiles, and from the Mk 41 UVPU using quad farms (4-fold increase in the ammunition load). With these parameters, Sea Ceptor air defense systems turn the ships of the British Navy into a rather serious headache for both individual strike submarines, “aircraft carrier killers,” and for the KMG in general for a very long period of time, before the transition fleet to hypersonic anti-ship missiles Zircon.

Ctrl Enter
Noticed oshЫbku Highlight text and press. Ctrl + Enter
We are
A promising destroyer for the Russian Navy - which one and why? (Start)Prospective destroyer for the Russian Navy - let's fantasize?
Military Reviewin Yandex News
Military Reviewin Google News
86 comments
Information
Dear reader, to leave comments on the publication, you must to register.