“Great Rifle US Drama” (Rifles by countries and continents - 2)

January 18 2018
12
Probably everyone - well, all of those who are interested in this, read that the military minister of the Russian Empire, Milutin, called "our unfortunate rifle drama." And this drama was that from 1859 to 1866, a specially created commission tested more than one hundred and fifty different rifles - about 130 foreign and more than 20 domestic ones, and alternately chose samples that were literally right there and replaced with new ones. All this was blamed on tsarism, that, they say, what his "stupid" and inert generals were. But the trouble is that all the same, it turns out, and not on a smaller scale, occurred in the same years in the USA!


And the constructions offered in those years by American inventors were sometimes simply unique! For example, Jonathan Browning - the father of John Moses Browning, among all his other developments in 1853, produced a harmonica capsule with a horizontally moving magazine. Interestingly, Browning belonged to the church of Latter-day Saints, that is ... was a Mormon, had three wives and a 22 child! And the whole family, he fed his gunsmith craft - that's how it is! 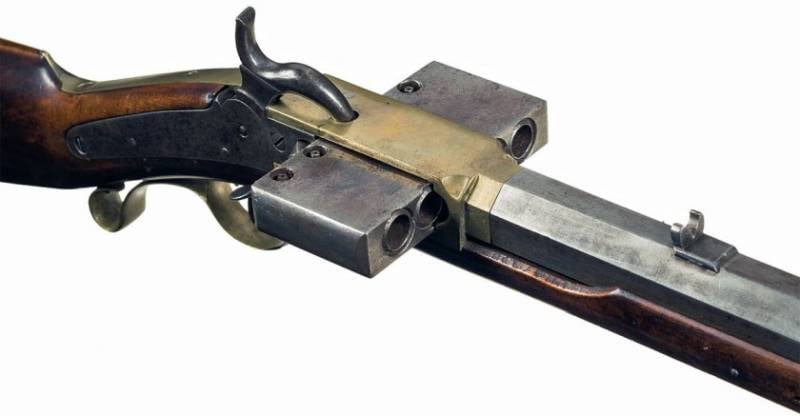 General view of the "harmonics" of Jonathan Browning. 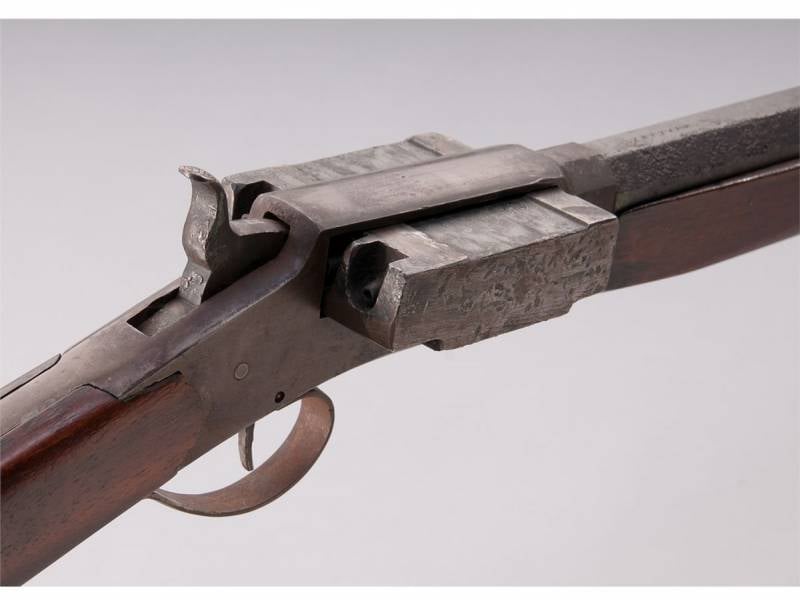 One version of the rifle with a transverse magazine is the Harmonica Zettler. 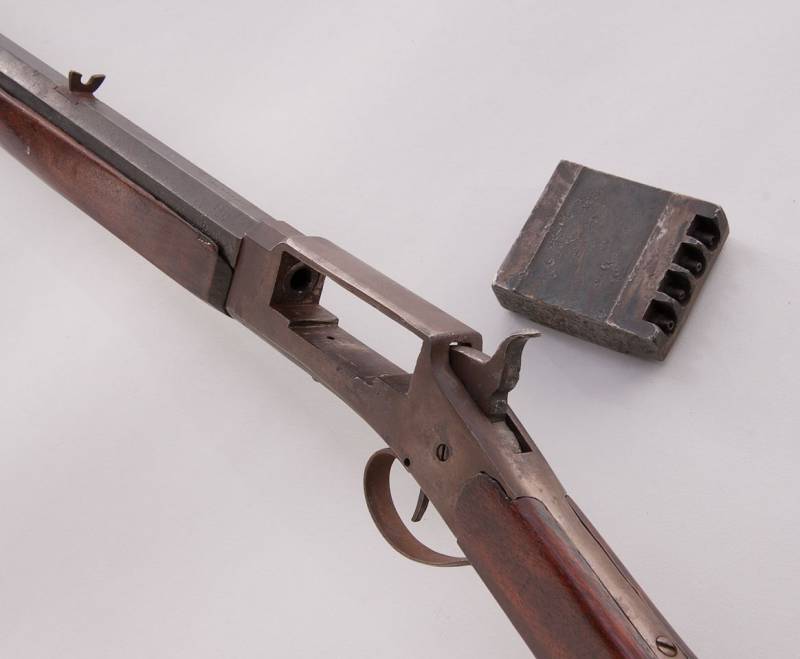 "Harmonica Zettler" and the shop to it.

The example of Jonathan, by the way, turned out to be truly inspiring. By the same principle, a number of pistols in Europe were designed, and after him in the USA a Wade Ingrham five-shot carbine with a lower trigger position appeared. Even years later, already in Russia, a very similar construction was proposed to the Commission for the development of a magazine gun, the one that subsequently participated in the development of the rifle Captain Mosin!

The disadvantages of such rifles traditionally attributed the possibility of gas breakthrough between the walls of the "harmonics" and the barrel, as well as the ignition of neighboring chambers for the same reason. This happened, for example, and often with a Colt drum rifle, but in the Wade system, the cameras in a “harmonica” were located one from another at a greater distance than in revolvers and in a Colt rifle, and besides, they had to be smeared with a mixture of wax and fat. The magazine was inserted both on the left and on the right, and at the same time no one heard the shutter sound.

For some reason, many believe that the American soldiers who served in the Wild West, without exception, were armed with Winchester carbines. Alas, in fact it is not at all so! However, first of all the cinema is to blame for this, including not only American westerns of the type of the classic Stagecoach, but also the Gödeir films The Sons of the Great Bear and the French-Yugoslav-German saga about Vinnetu and Old Shutterhend. In fact, this was not the case at all. On the eve of the Civil War between the North and the South, the standard weapons American cavalry caps carbine "Enfield" and "Springfield", and in the infantry again caps rifles. A textbook example was with such rifles found on the Gettysburg battlefield, where 37000 rifles were charged with 24000, 12000 had two charges in the barrels, one on top of the other, and sometimes the other way round - a bullet under a powder charge. In 6000 rifles there were three to 10 (!) Charges, and in one gun they were 23! All this speaks, firstly, about the level of stress in which the soldiers were during this battle, and secondly, about the principal inconvenience of weapons loaded from the barrel, because from some rifles with 2-3 charges their masters are all still had time to shoot!

That is why very soon everything that could shoot went into action, if only "this" was charged from the breech and charged quickly. The carbines reloaded with the help of a bolt, such as “Joslin”, “Starr”, “Bollard”, “Barnside”, “Sharps”, or trunk breaking - “Maynard”, “Wesson”, “Smith”, “ Gallagher. Moreover, they were produced on a significant scale. For example, Sharps sold the army more than 80000 to his carbines, and General Burnside sold 55000! In just the 18 of the last months of the war, the government bought Spencer's carbines more than 94000, while the Henry rifle, although not widely used, nevertheless also fought in the hands of NN soldiers in 12000. Well, in total in the armies of northerners and southerners there were more than 30 different brands of cavalry carbines. Fortunately, for those and for others, the calibers were about the same, so there were no special difficulties with the supply of cartridges, although there were also unpleasant exceptions. 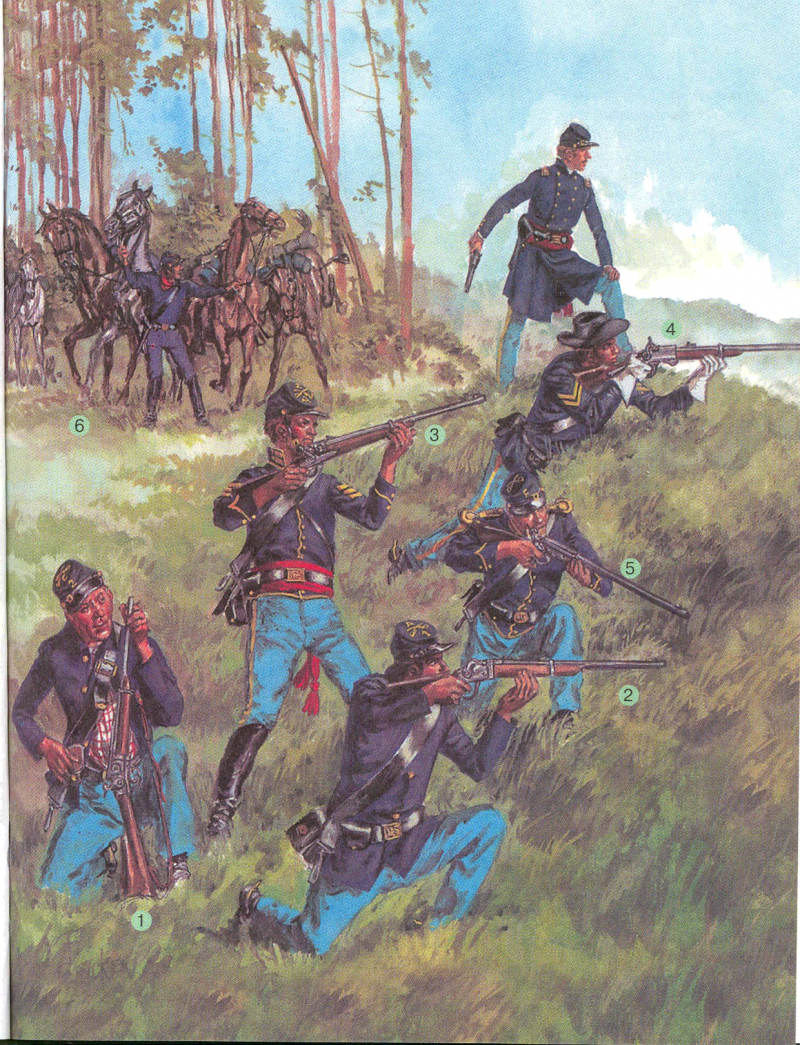 As already emphasized above, these were the most common systems, but there were others. For example, this one Allen and Terber carbine, produced in Massachusetts from 1860 year. Officially, he was not in service, but it was often used by scouts, militiamen and adventurers. When the war ended, some northern states adopted these carbines to equip their mounted police.

Carbine Allen and Thurber. The bolt in this carbine is controlled by the trigger guard. When she was leaning back and forth, the shutter was lowered in the grooves of the receiver, opening the breech breech.

About the creator of this rifle, Charles H. Bollard, it is known that he was born in 1822 in the city of Sterling, in Massachusetts, and was able to learn to be a machinist. 5 November 1861, he received a patent for a single-shot rifle chambered for with a ring ignition, which was rightly considered at one time one of the best examples of such weapons. Patent Bollard sold a number of companies, so during the Civil War his carbine was released not one company, but several at once. From 1875 to 1891, Marlin produced more than 20 Ballard rifle models, but it never went into service with the army, although it was very popular among athletes. 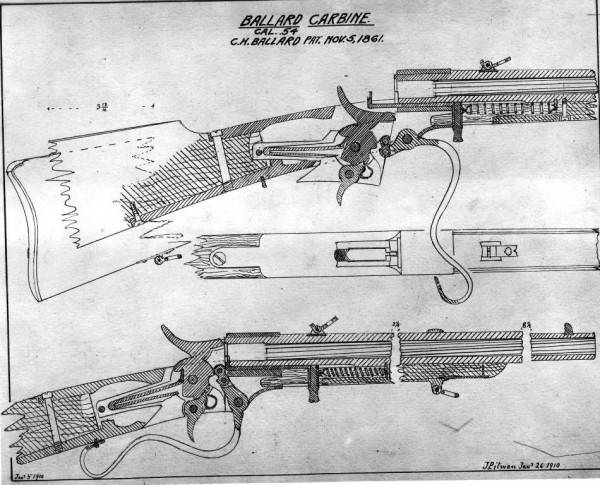 The Bollard 1861 carabiner. From this scheme, it is clear that the Bollard shutter was also controlled by a clevis lever, and when the clamp was thrown back - the shutter was lowered, and the extractor threw out the cartridge case. If suddenly the sleeve was inflated and there was not enough force in the extractor spring, then a handle attached to it was provided on the lower end of the forearm, acting by which it was possible to remove such a sleeve without using a cleaning rod.

Carabiner cavalry general Ambrose Barnside also had a bolt operated by a clevis lever, but the weapon was highly original. So, the folded shutter was installed vertically in the receiver and the cartridge was inserted into the charging chamber from above! The cartridge had an original cone-shaped brass sleeve, but it only narrowed towards the opposite of the bullet. In the bottom there was a hole flooded with wax, through which the flame from the capsule came in, but for some reason did not think of placing the capsule in this place. At the same time, such a device created another problem — when the sleeve got stuck, it was necessary to apply an effort to get it out. 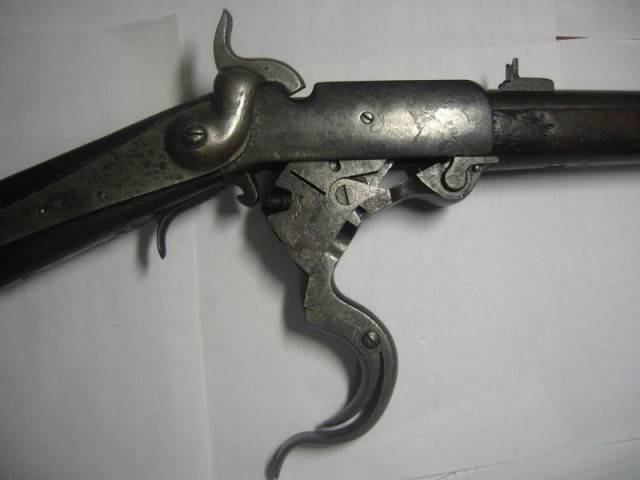 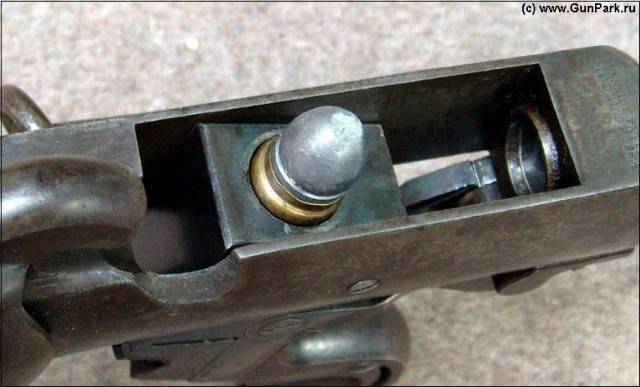 A cartridge in the chamber of the Barnside carbine.

It was patented by Malon Gallagher from South Carolina, where he lived in Sawan in July 1860. However, he was used in the army of northerners. It was produced by Richardson and Overman, therefore, it was sometimes called the “Richardson carbine”. The recharge system is not quite normal: the barrel moves forward. Cartridges were first used with a paper sleeve, then with a metal sleeve. During the period from 1861 to 1865, about 18000 carbines of this type were sent into the cavalry. However, the soldiers did not like them, first of all, because of the difficulties that arose with the extraction of spent cartridges. Caliber -.50 (12.7-mm). Length - 99, see. The disadvantage of the carbine was too original cartridge with a seamless brass sleeve, reminiscent of a short sausage - it was just as well rounded on both sides. On the one hand - a bullet, on the other - a hole for passage of the flame from the primer. That is, here the cartridge was separate and primer separately. Naturally, since there were no projections on the cartridge case, it was very difficult to extract from the chamber and for this every carabiner even had to make a special key! When Captain Crispin developed a new twisted sleeve made of thin tin and paper for the carbine, it turned out to be much more convenient and was now easily removed from the barrel with his fingers.

Gibbs' carbine was patented before the war, January 8 1856 by Lucius H. Gibs from Oberlin, Ohio. Production of the carbine began in May 1863 of the year, however it so happened that on July 13 1863 of the year the plant where it was manufactured burned down. Total time to make 1,052 carbine, so today this model is a rarity. It was also controlled by a barrel grip lever. When the lever was pulled forward, the breech rose to the side and a side-fire cartridge was inserted. 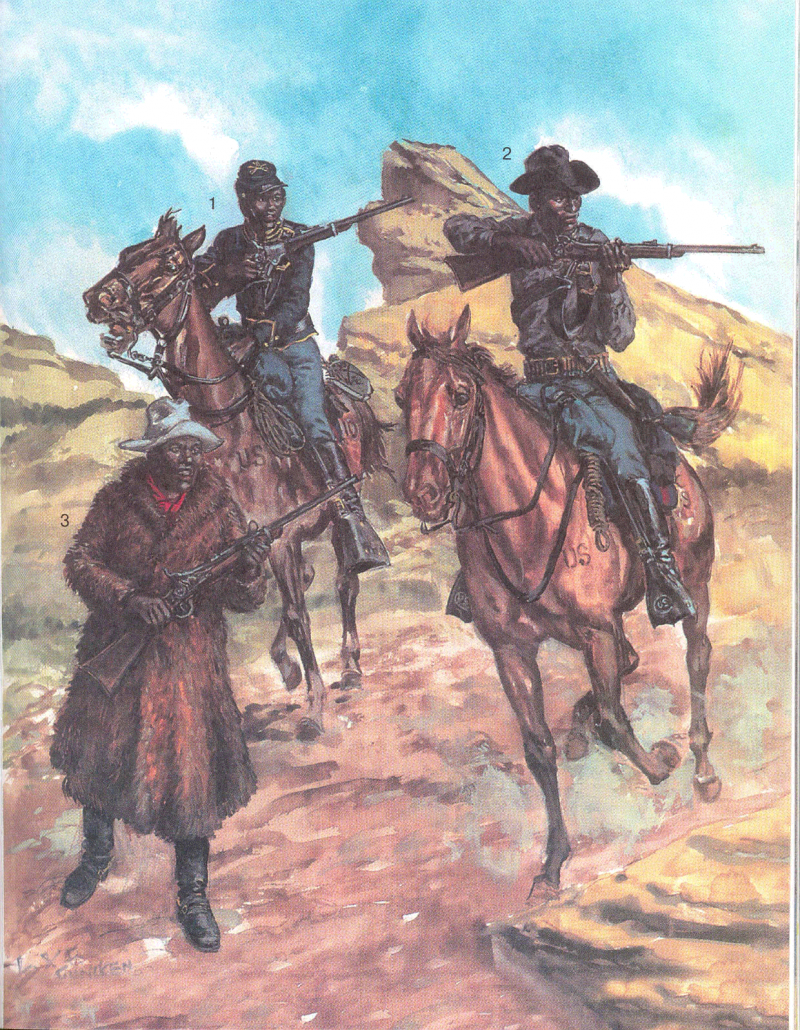 Soldiers of the color cavalry of the USA Army - “brunettes”. Figure from the book of Liliana and Fred Funkunov "War in the Americas. XVII - XIX century.

Ctrl Enter
Noticed oshЫbku Highlight text and press. Ctrl + Enter
We are
Browning Heavy Machine Gun M2 and his successorsWhat should be a modern sniper (part of 1)
12 comments
Information
Dear reader, to leave comments on the publication, you must to register.