On April 18, 1942, a group of 16 B-25 bombers under the command of US Air Force Colonel J. Doolittle, taking off from the CV-12 Hornet aircraft carrier, made a daring raid on Tokyo, Japan, and the cities of Nagoya, Osaka and Kobe. This action was a kind of US response to the blow inflicted by the Japanese side on the main base of the American fleet at Pearl Harbor Bay on December 7, 1941. For the United States, the bombing of Japan represented a great psychological effect (the material side of the matter was not the main one, and they were not taken into account with losses - 15 B-25 did not reach China). The Japanese side regarded this event as a blow to the prestige of the nation and its armed forces.

In response, top management in Japan developed plans for striking back in the continental part of the United States. Successful operations of aircraft-carrying submarines in remote areas of the world's oceans, including in close proximity to the coast of North America (in the Aleutian Islands), have shown their fundamental ability to strike at the United States itself.

In early August, 1942 Meiji Tagami, captain of the I-25 submarine, was summoned to the General Staff of the Imperial Fleet, where, in the presence of a member of the imperial family, Prince Takamatsu, he was tasked with making the transition to the West Coast of the United States and bombarding American territory with the help of Kugisho E14Y1 (“Glen”) seaplane.

The I-25 boat and its crew had at that time the largest and most varied combat experience (going to the coast of Australia and New Zealand, Fiji Islands, and operations in the Aleutian Islands and off the coast of the United States). The E14Y1 pilot midshipman Nubudo Fujita was considered the most experienced among his combat colleagues and had the largest number of hours (near 4000). 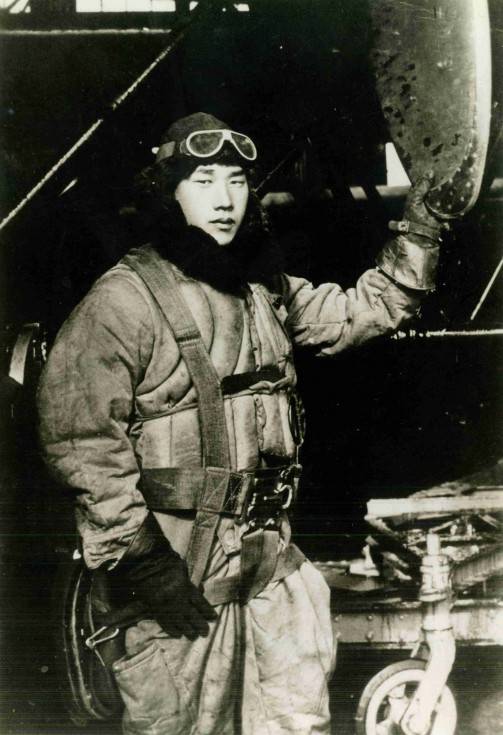 During the preparation of the combat operation, the intelligence services of Japan managed to obtain detailed maps of the US West Coast near Cape Blanco and adjacent territories (Oregon). This determined the site of the strike, which was planned to be carried out with special 76-kg incendiary bombs filled with small plates of white phosphorus, which during the explosion scattered over a large area (up to 300 square meters) and self-ignited in air with a burning temperature up to 1500 degrees Celsius.

The E14Y1 airborne seaplane (in a lightweight version - without defensive armament and with a reduced supply of fuel) could take on board two such 76-kg bombs (instead of two kilograms full-30). Breaks of incendiary bombs in a dry wooded area, according to the Japanese command, should have caused fires in a large area of ​​the US coast.

Submarine I-25 went to his historical a trip to the West Coast of the United States from the port of Yokosuki on August 15, 1942, carrying on its board the Kugisho E14Y1 (Glen) aircraft and six special incendiary bombs. The boat came to the intended area in early September 1942. However, the weather in the area of ​​Cape Blanco did not allow to begin the active phase of the operation.

The E14Y1 crew, consisting of pilot Nubudo Fujita and observer Soji Okuda, made their first combat mission to the historic bombardment of the continental US territory on September 9 of the year. The E1942Y14 (“Glen”) launched from the I-1 using a pneumatic catapult and, focusing on the lights of the beacon on Cape Blanco, dropped two 25-kilogram incendiary bombs on the forest. The removal of the bombing point from the coastline was more than 76 kilometers. Turning back, Fujita noted the ignition of the forest in the area of ​​bombing. 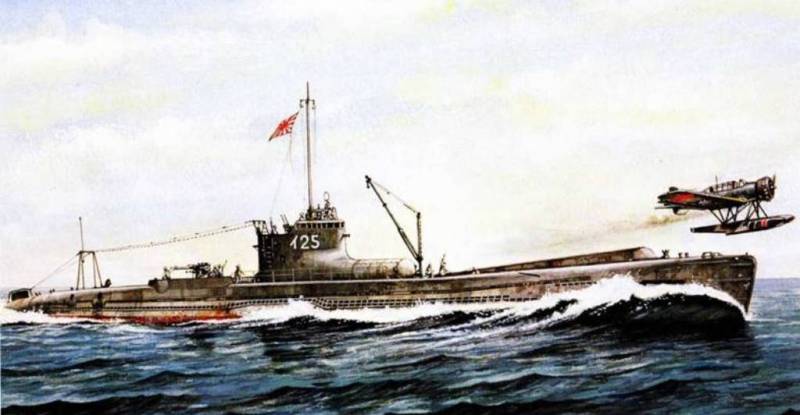 The Kugisho E14Y1 (Glen) seaplane launches from the I-25 submarine for historical bombardment of the US continental territory, 9 September 1942 of the year

According to archival American data, three people (two rangers and a soldier) became witnesses of the bombing in a remote forest area. One of the two incendiary bombs dropped did not explode; as a result of the second bomb breaking, the forest burned out on an area of ​​about 100 square meters.

On the way back, the E14Y1 crew spotted two ships off the coast, which they decided to fly around in a wide circle so as not to be noticed. Finding I-25, the plane safely splashed down next to it and was raised by the crane to the boat. During the preparation of the aircraft for placement in the boat hangar, the watch observer noticed an approaching American plane in the sky. E14Y1 managed to be placed in the hangar before an urgent dive before the attack of the US Air Force Lockheed A-29A Hudson patrol aircraft taking off from the McChort Field near the city of Tacoma, WA. No matter how hard the Glen crew tried, they still noticed a lonely unknown plane moving away from the coast and reported to the US Coast Guard. 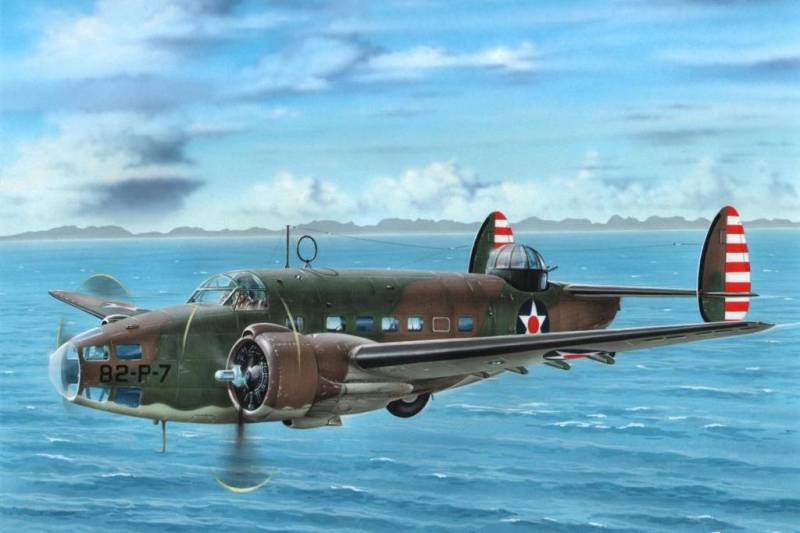 In order to avoid a repetition of the situation with the attack of the American anti-submarine (patrol) aviation I-25 captain Meiji Tagami decided to carry out subsequent E14Y1 sorties under cover of night. After carrying out repair work on the boat and waiting for favorable weather, the second combat mission of the Glen took place after sunset on September 29, 1942. 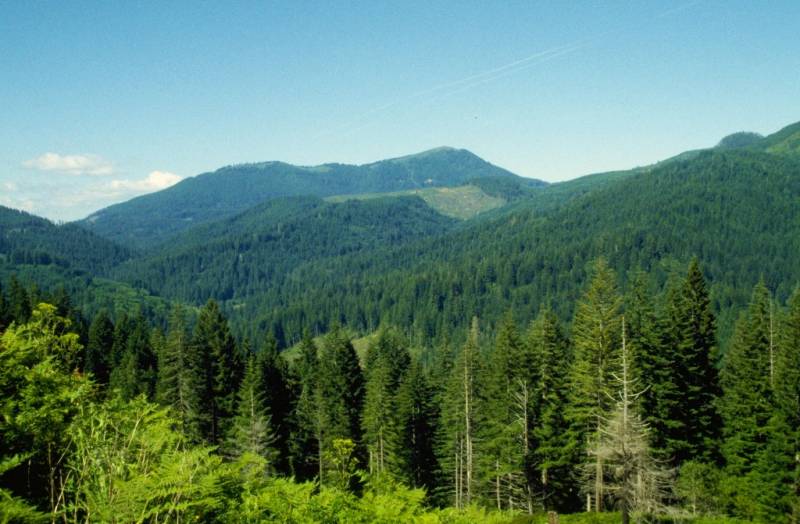 This time the bombing point was located to the north, at a distance from the coastline about 16 kilometers, east of Port Orford. The E14Y1 crew safely discharged two 76-kg of incendiary bombs to the forest. On the way back, the pilot of the Glen had to be pretty worried - in conditions of poor visibility, it was not immediately possible to find his boat, which is plying at a distance of 30 miles from the coast. In the night, a miracle managed to make out the oily trail that the I-25 left behind (this was probably the result of the attack of the American patrol plane that had been experienced earlier). Pilot Nubudo Fujita landed on the water near the submarine literally on the last drop of fuel.

The deterioration of the weather led to the decision of Captain I-25 Meiji Tagami to abandon the third raid and lie back to his native shores. On the way home, the boat torpedoed two American tankers (Camden, October 4 and Larry Dohery, October 6).

The historic bombardment of the United States by the Kugisho E14Y1 (Glen) seaplane from the I-25 boat had a great psychological effect primarily on the Japanese side - as a response to the Tokyo bombing. She was the only one throughout the Second World War. The crew of the Japanese submarine under the command of Meiji Tagami, the pilot Nubudo Fujita and his observer Soji Okuda forever entered the history of the world.

Material damage for the American side was minimal - the resulting forest fires were extinguished by the last heavy rainfall, and the US authorities did everything to keep the state population in the dark about what was happening. There was no panic among the civilian population that the Japanese command was counting on.

The only participant in the historical attack on the United States who managed to survive the Second World War was the pilot Nubudo Fujita. Before the start of 1944, he was in active combat service, after which he returned to the metropolis and became a flight instructor of kamikaze pilots, he no longer took part in the hostilities. The I-25 boat itself died a year later - it sank 3 September 1943 in the Solomon Islands area. Observer Soji Okuda died in October 1944 of the year during an attack on a US aircraft carrier near Formosa Island. 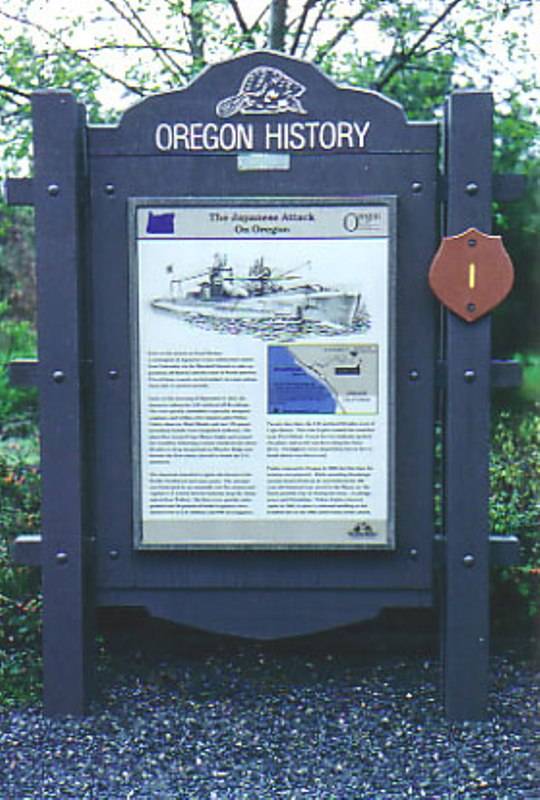 Memorial plaque dedicated to the September 1942 events of the year, Brookings, Oregon, USA

Ironically, twenty years after the end of the war, Nubudo Fujita and his wife, at the invitation of the Brookings administration, Oregon, visited the city, in the surrounding forests of which Japanese bombs were dropped. As a gesture of friendship, Fujita presented the residents of the city with an 350-year-old samurai sword, while he himself became an honorary citizen of Golden Beach. 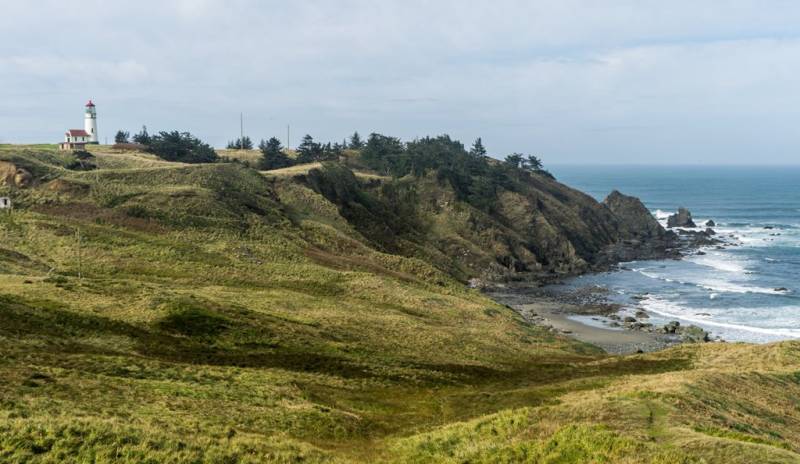 Some domestic authors of military history literature dispute the participation in raids of the second crew member, the observer Soji Okuda, and indicate other dates of the actual bombing itself. Meanwhile, in the foreign literature the above interpretation of this historical event is prevalent.

The seaplane “Kugisho” E14Y1 with the boat I-8 reached Europe. After a two-month transition from the port of Panang (Sumatra Island) 6 September 1943, the submarine with the Glen on board was docked in the port of Brest (France) occupied by Nazi Germany. During the transition, the E14Y1 was not used, although the temptation to lift it into the air came to the captain of the submarine cruiser more than once.

On the way back the boat went without an airplane. His place was taken by some samples of the new German military equipment (among them the V-1 V-1 cruise missile, radar). E14Y1 stayed on the shore. Germans are not interested in this miracle of Japanese technology. No one wanted, it was destroyed during one of the numerous Allied air bombardments.

During 1943, allied anti-submarine (patrol) aircraft became increasingly active in search and detection of Japanese radar submarines, depriving them of their ability to be on the surface for a long time without the risk of being detected and destroyed. After the ascent of the submarine in real conditions on the preparation and launch of the aircraft could go from 30 minutes to an hour.

Thus, the anti-submarine modification of the American Gumman torpedo carrier TBM-1D Avenger was equipped with an ASD X-NUMX-centimeter radar (AN / APS-3) radar on the front edge of the right wing with a detection range of a submarine to 3 km (in a calm sea ). 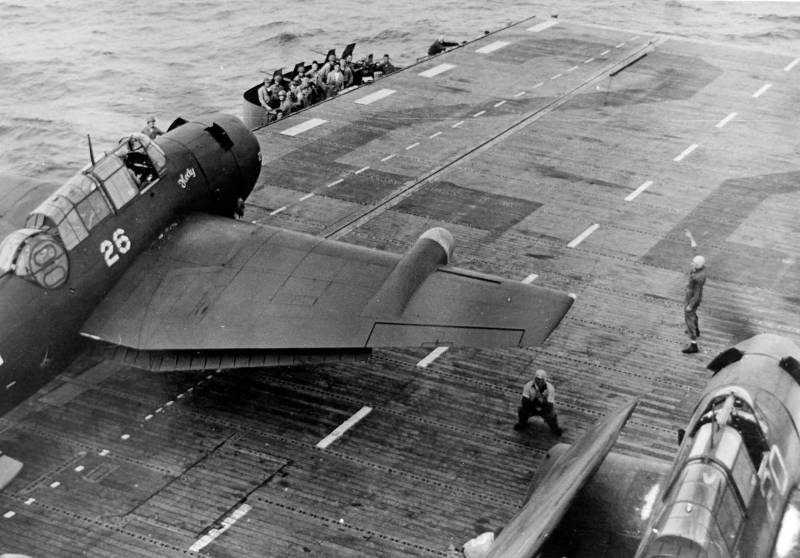 The British used for the fulfillment of reconnaissance tasks and combat enemy submarines deck torpedo-carriers "Fairy" "Barracuda" TV Mk.II, equipped with ASV Mk.II / Mk.IIN radars of the decimeter range with dipole antennas placed on the wings (detection range of large surface targets to 66 km, and the surfaced submarine to 20 km). 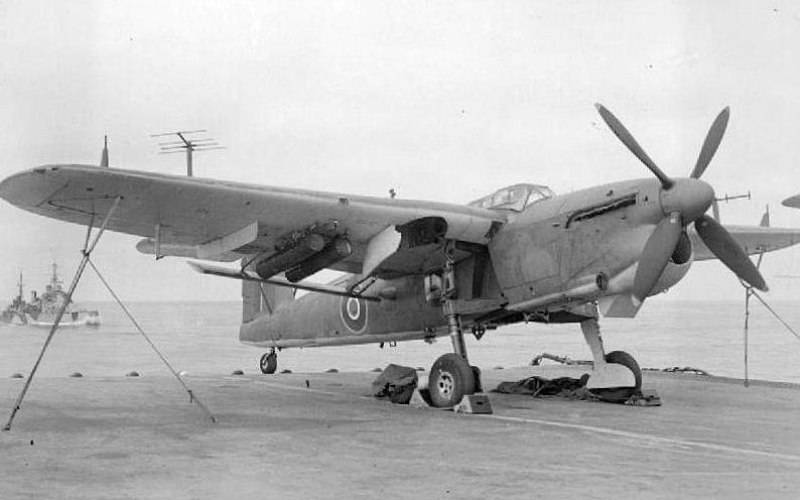 In service of the Coastal Command of the Royal Air Force and the Australian Air Force consisted of Lockheed Hudson patrol planes supplied by the United States under the Lend-Lease program, Mk.II / III / IV / V / VI. The latest modifications, unlike their American counterparts, were equipped with ASV Mk.II anti-ship radar, had a lower combat load (only four 113-kilogram depth charges) and the possibility of using 127-mm unguided missiles (NAR).

Under these conditions, the use of onboard seaplanes became extremely problematic. In the areas of active operations of the allied fleets, the Japanese were forced to abandon aerial reconnaissance by submarine seaplanes. In 1944, E14Y1 was limitedly used only in the Indian Ocean to search for allied transports without reliable security. 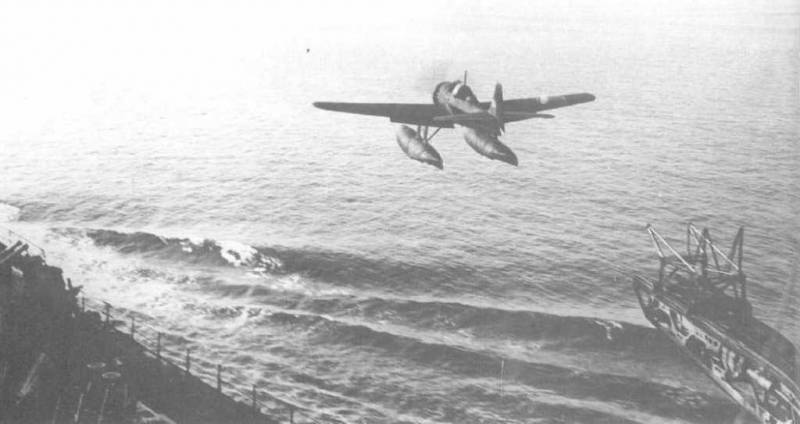 At the end of 1944, most of the E14Y1 that survived as superfluous, and the acute shortage of experienced pilots, was written off from boats to coastal bases or surface ships.