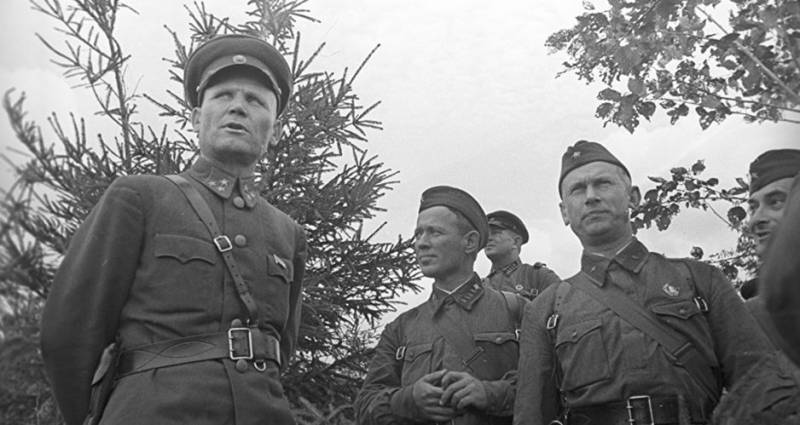 His military career began in World War I. He went from private to marshal. Service in the royal army lasted just over a year. Soviet Armed Forces given 55 years.

In the civilian thugs Kolchak, fought in Transbaikalia and the Far East. At the exercise in 1927 in the Moscow Military District, then his commander Boris Shaposhnikov admired Konev's regiment so much that immediately after graduation he said to him: “You have the makings of troop driving, it is felt that you can become a master of maneuver.”

In 1934, he graduated from the special department of the Military Academy named after MV Frunze. With the release it was noted: "... the academic course has mastered perfectly and is worthy of being promoted to the post of commander and commissioner of the rifle corps."

Konev commanded a regiment, division, special group of troops in Mongolia, the 2-th Separate Far Eastern Army, and troops of the Trans-Baikal and North-Caucasian military districts. In July, 1938 was given the rank of com-commander, in March, 1939 was commander of second rank.

With the beginning of the German invasion, Lieutenant-General Konev led the 19 Army. The first combat test was the Smolensk defensive operation. The skillful actions of the commander predetermined his promotion. Since 12 September 1941, Colonel-General Konev heads the Western Front. And soon he was appointed commander of the newly formed Kalininsky.

It is from the actions of the troops of this front on December 5, 1941 that the counterattack phase of the Moscow battle begins. Marshal Vasilevsky, then the deputy chief of the General Staff, subsequently testified that Konev showed good intuition, skillfully combined the power of artillery and aviation with the speed, onslaught and suddenness of the blow, he strove to see the battlefield with his own eyes, carefully prepared the operation.

On the dramatic days of December 41, the advantages of the com-front listed by Vasilevsky predetermined the victory over the troops of the 9 German army, the return of Kalinin, the rapid approach to the Rzhevskiy ledge.

Significant event in stories Steppe Front under the command of Konev - the battle of the Kursk-Oryol arc. “Stepnyaks” fought and won under Prokhorovka, August took Belgorod 5, Kharkov took 23. 26 August 1943, the year the commander became an army general.

Due to the fact that the theater of operations on which the formations of the Steppe Front operated, began to coincide with a part of the territory of Ukraine, it was renamed and in the fall of the 1943, the history of the 2 of the Ukrainian Front began. Important milestones of his combat path are the Pyatikhatskaya, Znamenskaya and Kirovograd operations.

The real triumph for Konev was the participation of front troops in the Korsun-Shevchenkovsky operation. He was opposed by Field Marshal Manstein, who had the reputation of being a military genius of the Reich, a master of encirclement. Konev took the troops entrusted to the German into the ring and at the same time did everything so that he had no reason to suppose that the Red Army had plans for a strategic offensive operation. Once surrounded, Manstein hoped for a miracle, looking for gaps. There was a moment when it seemed to him that a solution was found. But no, Konev again drove Manstein into a corner. There, where the German planned the breakthrough site, the 5th Guards quickly advanced tank army, whose soldiers showed miracles of heroism in the battle of Prokhorovka.

After the Korsun-Shevchenko 20 operation in February 1944, Konev became the Marshal of the Soviet Union.

The first two months of 1944 in the spring were conducted by the Uman-Botoshan offensive. The 8-I German army was crushed in it, the Soviet troops liberated a significant part of Right-Bank Ukraine, and Moldova. 26 March 1944, Konev's troops were the first to cross the Soviet border and enter the territory of Romania.

A month later, with a little Marshal received a new appointment - to command the 1-m Ukrainian Front. The summer Lviv-Sandomierz operation 1944 was outstanding both in design and execution. As a result, the final point in the battle for Ukraine was set, the enemy was expelled from southeastern Poland, and strong control was established over the strategically important Sandomir bridgehead.

The contribution of Ivan Konev, who in the troops was called “the general forward”, is not limited to the liberation of Europe. The brilliant victories in the Vistula-Oder, Berlin and Prague operations are connected with his name. 57 times Moscow saluted the troops, which led the commander. His military genius largely predetermined the outcome of the Lower Silesian and Upper Silesian operations. The opening of the monument to Konev in 1987 in Krakow was quite logical. But after a few years, local authorities will disgrace to the whole world, dismantling the monument.

1-th Ukrainian Front also distinguished itself during the Carpathian-Dukla operation. Note that in modern Czech Republic, no one talks about the dismantling of the monument to Konev. They pay tribute to his role in the liberation of the country from the Nazis.

Twice a Hero of the Soviet Union, Marshal Konev for many years held high positions in the control system of the Soviet army, was a member of the CPSU Central Committee, deputy of the Supreme Soviet of the USSR.

Ctrl Enter
Noticed oshЫbku Highlight text and press. Ctrl + Enter
We are
Chernobyl notebook. Part of 3Myths of the Great Patriotic. Papier mache helmet
64 comments
Information
Dear reader, to leave comments on the publication, you must to register.