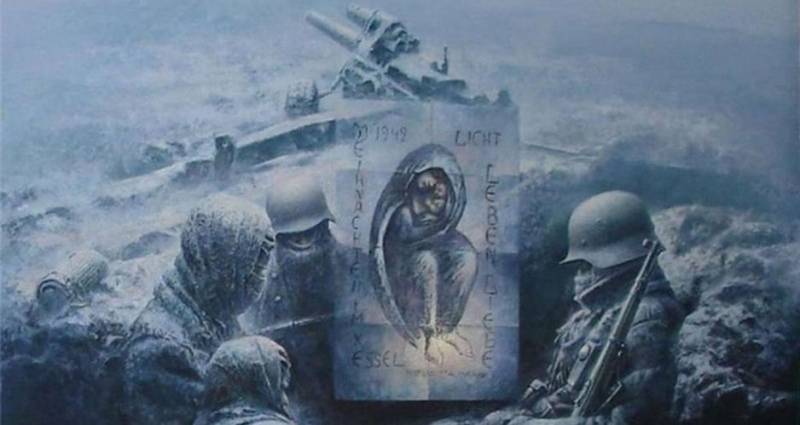 On the night of Christmas 1942, soldiers of the 30th, exhausted by hunger and 16 degrees below zero, tank divisions of the 11th army corps of the 6th army of Paulus reached into the dugout of Lieutenant Kurt Roiber. Before their eyes appeared an unusual image, initially perceived as a mystical vision. And someone decided that these were hallucinations ...

"Over the visible traces of the dead, starved, frozen German soldiers will never be a cross, a gravestone will not be hoisted." These lines about the crushing final of the Battle of Stalingrad for the invaders were later written by the German Field Marshal Erich von Manstein. According to him, only the memory of their inexpressible sufferings and death remained. But about the one who is largely to blame for this, Manstein prefers not to talk ...

That was the end for one of the best in the Wehrmacht 6 army, commanded by Friedrich Paulus. The battle of Stalingrad, unprecedented in scale, bitterness, and military and political consequences, ended on February 9, 2, with the complete victory of the Soviet troops.

Today, after three quarters of a century, bitterness and irreconcilability are gone, time smooths the pain of loss. Moreover, among the representatives of the older generation who fought on the Eastern Front and were captured by the Red Army, I met many who sympathize with our country and towards the Russian people. How many Germans have merciful Russian women, who themselves then starved, gave a piece of bread or a potato! The former soldiers of 6-th Paulus who passed through captivity — those who lived to this day — often recalled this.

And their other story - about 1942 of the year experienced at Christmas - was initially perceived as a legend. There, in the "Stalingrad boiler", in the trenches and dugouts covered in snow, the icon of the Mother of God appeared to the eyes of the soldiers and officers. Exhausted by hunger, disease and frost, gripped by a sense of doom, people at first perceived it as a mystical vision ...

But the icon really was. At the request of his wounded and weakened “camden”, she was created by military doctor Kurt Reuber.

At Stalingrad, Lieutenant Royber was part of the 16 Tank Division of the 11 Army Corps of the 6 Army. From 15 in September of 1942 to February of 2 in February of 1943, the division was commanded by Major General Gunther Angern. The compound has been on the Soviet-German front since June 1941. 23 August 1942, the 16 Division in 16.00 broke through to the Volga north of Stalingrad.

In addition to the work of the senior doctor of the infirmary, Roiber had another thing that he considered morally important: the duties of the pastor. In his prayers, it was thought that mankind would learn to distinguish between good and evil. Seeing the hardships and sufferings of the local population, he, as a doctor, helped the Soviet prisoners of war, the inhabitants of the destroyed, but unbroken city. Is it an accident? The answer to this question should be sought in Rober’s pre-war biography.

Kurt was born 26 March 1906, in the German city of Kassel, in a poor and very pious family of farmers. Education received in the spirit of peasant traditions and religious values. A year before the call in the Wehrmacht, in 1938-m Roiber defended his doctoral thesis on the topic “The ethics of the doctor class”. He was an intellectual, a well-educated person: a doctor, an artist, a theologian. In the recent past - pastor from the village of Vihmannshausen (Hessen). Father of three children.

At the front, Dr. Roiber tried to understand the Russian people. “I constantly look into their faces,” the medic shared his feelings in letters to his relatives. - Russian man in everything is a mystery to me. Often you find yourself in front of the Slavic soul, like an impenetrable wall of fog. And you never know what you will see when it opens: a soft warm light or even greater darkness. ” But over time, kindly, humanly talking to civilians, this light in their eyes, he discovered for himself more often. As a priest, Kurt Roiber perceived the soul of the prayers of women and old people.

But by the end of 1942, his countrymen had to pray for salvation. The ring around the 6 Army was inexorably compressed. Tank formations under the command of Colonel-General Hermann Goth tried to unlock the surrounded Paulus group. However, in the course of the Kotelnikovo and Middle Don operations conducted by the Soviet troops, they were not only stopped, but also far back. 23 December 1942, on the eve of the Catholic Christmas Eve, hope for outside help has collapsed ...

In order to somehow support the wounded and sick soldiers, Kurt Roiber, at their request, drew the Mother of God with little Jesus on the back of a Russian geographical map: Virgin Mary holds a sleeping baby in her arms, gently pressing him to her body to warm him. Along the perimeter of the charcoal-painted icon, 95 in size on 115 centimeters, is the inscription: “Light, life, love. Christmas in the "boiler". Fortress Stalingrad, 1942 ". Later, the icon Reiber came to be called the "Stalingrad Madonna" (Madonna von Stalingrad).

The evening before Christmas, Dr. Roiber attached the icon to the wall in his dugout. The soldiers quietly sang two Christmas songs. The battalion commander Wilhelm Grossse (Wilchelm Grosse) congratulated his subordinates, and Roiber removed the fabric from the icon. The soldiers saw a candlelit drawing of a doctor. Here is how he himself responded to their reaction: “They stopped as if dug in reverential silence, struck by a picture hanging on a clay wall, under which there was a fire on a log driven into an earthen wall. The whole Christmas festival was impressed by the drawing and the words framing it: light, life, love. ”

The dugout with the “Madonna” became a place of pilgrimage for German soldiers. And then the doctor and priest Roiber began to go around the other frozen soldier’s shelters with the icon, in order to encourage them before Christmas. After all, this day reminded them of the house, of loved ones. Soldiers prepared for the holiday some of the scarce products that still remained. And with the words "for all that we love" raised champagne glasses. The bottle opened at Christmas was miraculously preserved by the battalion commander.

Unusual package for Frau Marta
It would seem that later tens of thousands of captured German soldiers of Paulus’s army were no longer icons of Roiber. Only in 1956, the last of them returned to the post-war Fatherland. But all these years they remembered the icon ...

And most importantly - the Stalingrad Madonna itself has been preserved. The icon managed to be taken out of the "boiler" with Commander Reiber Wilhelm Grosse, who was seriously wounded. He was evacuated last board. 15 January 1943, the Soviet units broke through to the main airfield of Paulus, surrounded by 6 Army Nursery, which was covered from the air by the fighters of the Udet JG3 air regiment. And on January 21, the Germans had to leave Gumrak, where the last landing strip was located, capable of receiving large aircraft.

In Germany, Wilhelm Grosse sent Kurt Reiber's family a package with his sketches. “In one of the drawings is your father. This is for the mother, ”Grosse wrote in a note. “And Madonna, written in fortifications, is for you all.” So Martha Reuber-Iske (Martha Reuber-Iske), wife of Kurt, became the owner of 150 drawings of "people of the East", made by her husband. Previously, most of them were brought home by the head of the family when he came on vacation. Now Frau Martha found the original of the Stalingrad Madonna.

As for the 16-th tank division, in which Dr. Roiber served, it was surrounded by the rest of the 6-th army and in January 1943 was destroyed. Major General Gunter Angren committed suicide. This happened on February 2 - on the day of the end of the Battle of Stalingrad. A Wehrmacht lieutenant Kurt Roiber was in Soviet captivity. He was sent to the NKVD camp No. 97 in the Elabugi area. This is an old town in Tatarstan, surrounded by forests on the right bank of the Kama, 215 kilometers east of Kazan. Roiber got there, much weakened, with health undermined by hunger and frost. He suffered from typhus and suffered from chronic inflammation of the middle ear. There, under Elabuga 20 January 1944, Kurt Roiber died. He was 38 years old. Preserved his photograph and self-portrait.

After the war, Roiber’s drawings and letters were published and became widely known in Germany. And his “Stalingrad Madonna” became a symbol of repentance, forgiveness and hope. After all, if the proposal of the Soviet command to surrender was surrounded by Paulus’s 6 army, it was possible to save the lives of tens of thousands of German soldiers. But Hitler did not allow even the thought of surrender.

And during the Cold War, the icon of Roiber became the symbol of peace in the West.

In 1983, the relatives of the doctor handed over an icon of the Berlin church to the commemoration of Kaiser Wilhelm-Gedachtniskirche Berlin. The Stalingrad Madonna was recognized as canonical. It was consecrated by the hierarchs of three European cities: Archbishop Volsky and Saratov Pimen and church representatives of cities that survived during World War II massive bombardments: English Coventry (sister of Volgograd) and German Berlin. In the city-hero on the Volga, in one of the local temples there is a copy of the icon of Roiber. The same was presented by the German side to the Anglican Cathedral in Coventry.

Volgograd artist Vladislav Koval was so impressed history “Stalingrad Madonna”, which dedicated her picture to her. It depicts four bowed, haggard German soldiers in a trench. Two in helmets, two others wrapped with scarves. Bowed over Jesus, the Virgin Mary is outlined by a kind of mystical circle that exudes unspeakable light. This is the light of Life, Hope and Peace ...

Ctrl Enter
Noticed oshЫbku Highlight text and press. Ctrl + Enter
We are
Myths of the Great Patriotic. Papier mache helmetStalingrad Madonna. Not in the power of God, but in truth
245 comments
Information
Dear reader, to leave comments on the publication, you must to register.